Everyone's excited for the new Planeswalkers in Origins. While it'll take some playtesting to determine their in-game value, there's nothing wrong with judging them based on appearances. A lot of effort goes into making these cards look pretty, so a little time should be spent appreciating them for their art. Let's take a look at some of the cards individually and walk through their aesthetic value and composition. 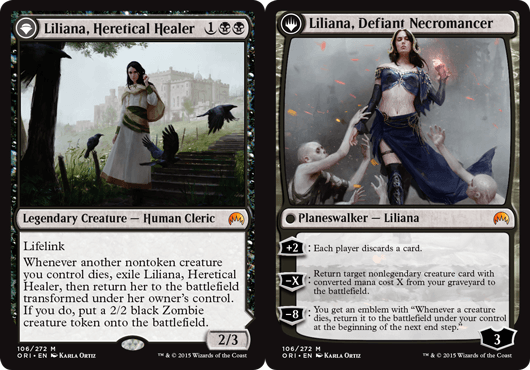 The first thing that strikes me about Liliana, Heretical Healer is how subdued it is. The presence and vivacity we expect from the great necromancer just isn't there. But that's kind of the point. This card does a great job at communicating who Liliana was before she became a Planeswalker. Still dark and somber, but softer. She's not dripping with confidence and fire yet. Everything's toned down to the point that it feels like looking at it through a haze of Fog. It's atmospheric, it's slightly creepy, it's a great piece for a strange, misunderstood young woman. The crow's symbolism is a little overt, but without them the piece would be too still. Artist Karla Ortiz is the queen of dark atmosphere. Just take a look at her work on Ashiok's Adept or Ghoulcaller Gisa.

Liliana, Defiant Necromancer is a lot closer to the Liliana we know and love. The one who emits power like an over-compensating high school boy reeks of Axe body spray. Like Liliana, Heretical Healer, this piece is still muted and grey-toned. However, unlike the Heretical Healer, the ashen colors invoke a sense of decay. The slight flecks of red (whatever that is) add a slight amount of color to the piece so it isn't entirely flat. The red complements the deep purples of Liliana's outfit. Speaking of that outfit, notice the exaggerated sweep of her skirt. If the skirt was hanging flat from her hips, then she might appear too static.

My biggest criticism of the piece is the background. Likely, it's supposed to be a Gothic-esque building, or maybe some creepy woods. Honestly, I can't tell what it is. If it's indistinct, then it isn't adding to the atmosphere. It's just loitering back there, hoping nobody will notice how lackluster it is. Compare it to the background of Jace, Telepath Unbound. You can have a detailed background and still have it be subdued enough to not draw attention to itself. The fanboy zombies are a nice touch, though. 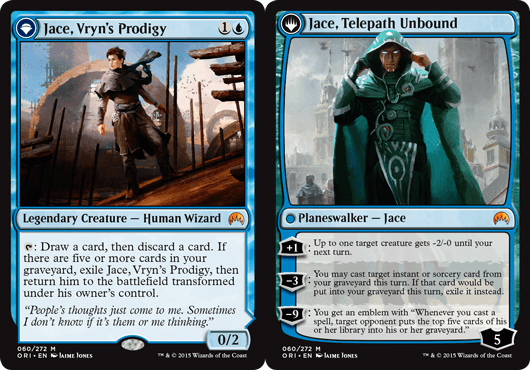 There's a good balance between the foreground, midground and background in the art for Jace, Vyrn's Prodigy. What pulls the piece together into a cohesive whole is the midground, or the stuff loitering around behind Jace. If it weren't for that half-shell in the background, then the towers and clouds would have no sense of scale. They would be chilling there, and Jace would be standing around awkwardly like me, age 14, at a school dance. The midground is what ties the foreground and background together, and causes them to exist in happy harmony. There's also a nice little spotlight shining on Jace, which helps draw the viewer's eyes to the main subject. The heavy browns tell us everything we need to know about this kid's past: he started from the bottom before he could make it to the top.

Visually, Jace, Telepath Unbound succeeds where Liliana, Defiant Necromancer flounders. It's an example of a muted background working to highlight the focal point. Notice how everything behind Jace looks like newspaper left out in the sun? That's a deliberate artistic choice. You aren't supposed to be looking at that mess back there, although its insignificance doesn't stop it from being lavishly detailed. The background is also blue-toned, complementing Jace's robes. Jace himself is one thick stroke of confidence and power. This is not the slightly insecure novice out to prove himself. This is a man who is so confident he can beat you without a sweat, he's not even going to fall into a fighting stance. It's not an impressive display of his power, a la Mind Sculptor, but rather a show of confidence in his power.

As an interesting sidenote: Jaime Jones also did the art for Jace, Architect of Thought.

Overall, this piece is much more interesting. Strong vertical lines, strong color, and an air of confidence give this Jace a more sinister, commanding feel than Architect of Thought. He's just finished pulling his hood up, meaning he's about to take some action. The audience doesn't know what that action is. Instead, all we get is this one glimpse of a calm, collected Jace before the storm breaks loose. 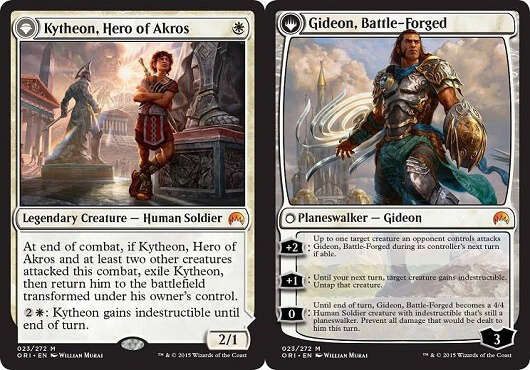 The art on Kytheon, Hero of Akros is underwhelming. The background feels crowded, with one too many pantheons/obelisks/looming gods. Like, okay, we get it. Baby Gideon is from Theros. Good for him. Other than that, what does this picture tell us about Kytheon? He likes to lean against things. His pose carries some sass, so there is that. However, the art could do a much better job at communicating who he is. On top of that, the color palette isn't strong. It's a wash of gray with nothing that pulls it together. Maybe if the lighting was more intense, reflecting off the chiseled edges of the statues, the piece would have some more interesting points. Overall, I'm not impressed with the art; it places too many elements into the space without tying them together.

Kytheon's flip-side isn't much more impressive. The art's biggest failing is its weak color palette. Gideon's outfit is a wonky combination of colors. Unlike the other four Planeswalkers in the set, he doesn't have a strong signature color. Instead, there are a lot of small elements to his outfit that are nice enough individually, but they don't work with each other. Instead, they pull in too many different directions at once. There is no focal point, leaving your eyes to wander aimlessly. If there was a dominant color in the background, it could tie the piece together. Instead, it's a pastel wash of yellows to blues.

Remember how we explored the important midground in Jace, Vryn's Prodigy? The art for Gideon lacks a midground, meaning we have no reference point for him compared to the castle. At least the piece doesn't do straight-on eye-level perspective. Instead, it's at a slightly low angle, looking up at Gideon. This helps make him appear bigger and more "swole." You could say that out of this batch of cards, Gideon is the nerd. He's less visually impressive than his peers, but will go on to probably see more tournament play. So hang in there, Gideon, there is life after the Prerelease! 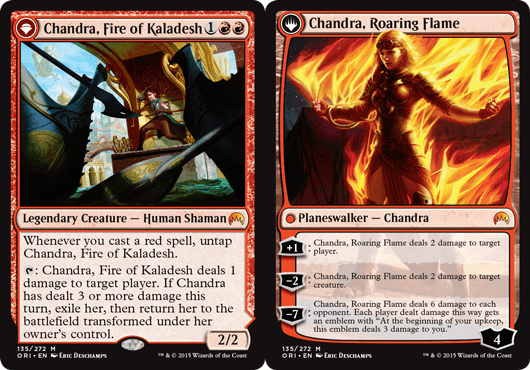 The colors are pretty juicy on Chandra, Fire of Kaladesh, and she has a wide spread of rich hues. However, it's not immediately obvious what the focus of the picture is. Chandra is just a blip in the background, overshadowed by the boats. No less than three people walked by as I was writing this article and commented that they couldn't even see Chandra. Her clothing is too similar in color to her surroundings, with her tunic a greenish blue, like the water, and her pants a yellowish brown, like the bridge. There is a diagonal line that helps lead the audience to her, but it's not the strong visual oomph you desire. The low perspective is totally counterintuitive; the viewer is looking up from the waterline, but it's not immediately obvious where they are. If the camera panned out to provide a wider shot, or if it was looking down at the water and boats, then the viewer could get a better reference point. As is, it's a mish-mash of too many directions without a clear focus.

Chandra, Roaring Flame, on the other hand, is SWEET. If I cracked a pack and saw this, I'd be happy just for the sheer quality of the art alone. Fire effects are an easy way to impress. Fire is a tantalizing thing to stare at. Unfortunately, there are too many Magic cards where the fire isn't done right, and it's just a orange-yellow cloud. The fire on this has a distinct outline without looking stationery. Those beautiful feather-thin wisps look like they are rolling off Chandra in steady waves. The fire is so impressive, it sort of detracts from Chandra. She is light on detail and flavor compared to the flames. The deep russet tones of her tunic are savory, but they appear dull contrasted to the flames. As the artist of Dack Fayden and Elspeth, Sun's Champion this isn't Eric Deschamps's first illustrating Planeswalkers rodeo. He does a great job of doing simple poses with dynamic effects, like Dack's glowing hand and Elspeth's robes. 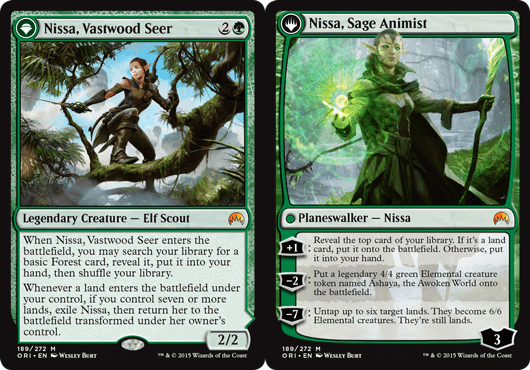 Nissa, Vastwood Seer is my personal favorite of the five pre-flipped Planeswalkers. The colors are rich, hitting a vibrant balance without being cartoony. Notice how the branches frame Nissa, centralizing her as the main energy of the piece. Nissa's pose is also full of flair, although her spine is just a wee bit contorted. It seems hard to bend like that unless you're part Laffy Taffy, but you can feel her exuberance. She isn't a directionless wayfarer in the woods. She is lord and master of the land. Look at her foot propped up on the tree, like she owns the place. The details are so crisp you can practically hear the crunch of those leaves. It's an engrossing image, both easy on the eyes and varied enough to hold interest. The composition makes me think of Sandsteppe Outcast, also by Wesley Burt.

Nissa, Sage Animist showcases another example of excellent lighting effects. Nissa's glowing orb adds a bright splash of color to what is otherwise a fairly flat piece. Compare the colors of Nissa, Vastwood Seer to this card. The other side has the browns of the tree trunks, the blue of the sky, Nissa's vibrant, creamy skin. This card is mostly green, which isn't necessarily a bad thing. Restricted color palettes can be excellent. However, the coloring of Nissa isn't so interesting. Her cloak makes a huge dark spot that isn't atmospherically appropriate. The lighting on her skin is too even and plastic-like.

The fallen log in the midground is distracting. It's more vibrant than Nissa herself. Compare Nissa's glowing orb to the lighting effects in Elvish Mystic, which also features art by Wesley Burt. It worked better in that card, where the trees in the backdrop posed a more dynamic background. This side of the card isn't as fun to look at as its other-half.

Magic art has spiked in quality over the last decade, with grander pieces gracing those little cardboard rectangles with every new release. Next time you're cracking packs, whether it's at the Prerelease or a Draft, take a moment and appreciate what's in your hand. You are holding the cumulative efforts of over 200 artists who slaved and aspired to make your game of fantasy-themed fun more beautiful. They deserve all the recognition they can get.