Before we get into the meat and potatoes of this spoiler, I wanted to get one thing out of the way...

OH MY GOSH! A CHIEVE!

I was super excited when I first saw Brutal Hordechief and realized it was a chieve. If you guys don't keep up with my articles or are unfamiliar with the shenanigans Melissa DeTora and I get into, you can read about chieves in the accompanying article here, or check out these specifics:

"...a few weeks ago Melissa and I were drafting Khans of Tarkir and she asked, "How come the plurals of things like knife and thief all have a "v" in them, yet the plural of chief isn't chieve?" It actually made a lot of sense. Thief, thieves. Loaf, Loaves. Chief...chiefs?

Well, I nearly lost it, it sounded so funny, and ever since then we've kind of been calling them chieves, correct English be damned! It also sounds a lot like "geez" and lends itself to a ton of (perhaps not so) comical puns ("AskChieves.com"), as you may notice in the videos."

Ever since then, it's kind of been a thing that and my stream viewers have even come up with things like Duel Decks: Morves vs. Chieves. It's taken on a life of its own, which really made me wonder if being given a chieve for our preview card was deliberate.

All chieves aside, this past week we've seen a ton of mythic creatures that have powerful static abilities along with powerful hybrid mana activated abilities. What we have for you guys today fits into that mold, and boy is this chieve a good one. It looks kind of like what it would look like if this guy...

Had a baby with this guy...

Sure, I know what you're saying: "But Frank, how can a creature have a baby with an instant? The instant isn't even sentient!" To which I would reply, "Wow, you're incredibly literal! You're sitting at around a nine right now and we're going to need you at around a four."

Well, I guess I'll let you be the judge for yourself... 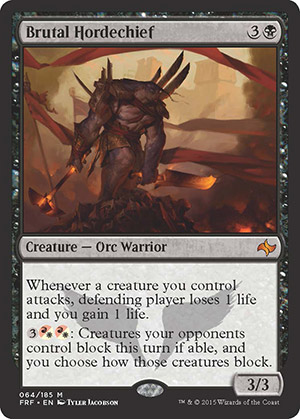 So now you see what I mean about the Hellrider and the Master Warcraft and the baby and what not?

Let's take a look at why he's so similar to the aforementioned cards, and also what sets him apart from them in a convenient pros and cons list.

Cons (Or should I say..."Khans"):- Unlike Hellrider, Brutal Hordechief doesn't have haste.- Brutal Hordechief's ability is life loss and not damage, so it can't be redirected to planeswalkers....okay, I think that's it.

Pros:- The opponent not only loses life, but you gain it for each post lost.- Brutal Hordechief fits perfectly on curve after something like a Hordeling Outburst.- Brutal Hordechief is a warrior, which means he Reaps the benefits from other warriors...like chieves! (Specifically Chief of the Edge and Chief of the Scale.)- Brutal Hordechief himself doesn't have to attack for his benefit to be gained (similar to Hellrider).- Choosing how your opponent blocks is huge, especially in the late game. While we can't make our guys "unblockable," so to speak, because they have to block if able, we can put all of his guys on our worst guy, or some similarly bad deal.

One obvious parallel this guy has is to the recently printed Sorin, Solemn Visitor. If we have three 1/1 tokens, say from a Hordeling Outburst (the perfect colors for our Brutal Hordechief!), when we attack with our goblins both cards are going to gain us life and both cards are going to help us take three more life from our opponent than we originally would have, but there are a few distinct differences:

Sorin does not provide a creature for us and give us a drain and gain ability. It is either/or with this guy.

This is not so with the Brutal Hordechief. He not only gives us a 3/3 body for the opponent to deal with, he also gives us a very relevant ability in the form of a parallel to Master Warcraft. While we can't do the dirtiest of deeds and make our opponent declare "no blocks" (due to the Hordechief stating that "creatures your opponents control block if able"), what we can do is stack all of the opponent's creatures on our worst guy, presumably a 1/1 based on how the Standard format is looking right now. And they still end up taking a damage.

Every time we receive a preview card, I inevitably ask myself if I think it will see play in Standard, or better still, older formats. While I don't think the Hordechief will have any groundbreaking applications in formats like Modern or Legacy, I think it would take a very strange turn of events to keep this guy from competitive Standard decks in the near future. The fact that he can be played in Mardu, Abzan, black/white, or black/red, and each of those combinations has the tools for a very explosive aggressive deck, leaves the Hordechief with a very promising future, especially when each combination can result in a completely different archetype. He could play the top end of Abzan Aggro, or he could find a home in Mardu Tokens with Raise the Alarm and Hordeling Outburst. He could even take advantage of his warrior heritage with either Abzan or black/white. To be quite honest, I could even see this guy putting Monoblack Aggro over the top with the sheer number of one and two-drops the deck has access to, and that's without being able to activate his ability!

All in all, Brutal Hordechief is a brutally versatile threat and has the potential to squeeze his way into numerous decks and strategies. I for one am not looking forward to the day where my opponent has multiple Brutal Hordechieves in play against me.