Just as I do for each new set that is released, I'm going to offer my financial predictions for Kaladesh. This time I'm going to make it into a game. Here's how the game works:

It's kind of like that Price is Right game where you switch the prices. The goal is to pick which 3 cards I overvalued the most (percentage-wise) and which 3 cards I under-valued the most (percentage-wise). For instance, if Fumigate (as of writing this, $2) drops to $1, it dropped by half, which would count for the same as if Verdurous Gearhulk ($11) drops to $5.50. Likewise, if Dovin Baan rises from $14 to $28, it doubled, which would count for the same as Angel of Invention ($4) doubling to $8.

I will check back in one month and whoever made the best switch will become the Switch'em Champion! As the prize, I will personally send you an autographed mythic rare of my choice (and it will be one of the best ones from Kaladesh).

Six of the best cards in the set did not make it into either list because, let's face it, Chandra, Torch of Defiance and the five enemy fastlands are clear slam dunks that will be format defining staples throughout their lives. 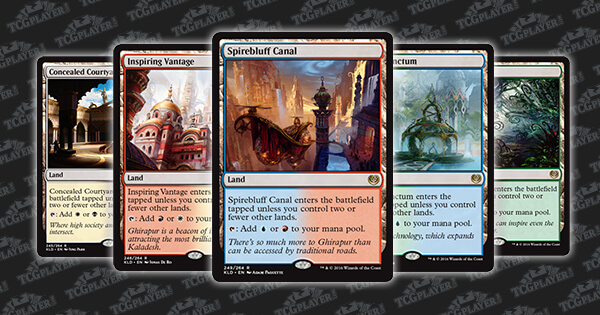 There's no telling whether Chandra will double in price or drop considerably, but she will definitely be in high demand and heavily played. The lands will likely drop in price a bit before going back up, as most Modern-playable lands do. My suggestion is to go ahead and pick up a playset of each of the five duals and then pick up Chandra, Torch of Defiance too if you have the resources to do so. Otherwise just play a non-Chandra deck. We'll call this first category the "Take My Money!" category:

This next category contains all the cards I would buy now because I expect their prices to rise by this time next month.

The hype is quickly picking up on this one and so is the price. It's still only barely into double digits, despite climbing into the Top 5 highest demand cards in the set. It dominates the board immediately and doesn't take long to get online. I expect this to continue to climb.

Aside from the dual land cycle, this is my favorite non-mythic rare in the set. Spirebluff Canal has it slightly edged out for most expensive non-mythic rare in the set, but despite started right near the top, I expect it to climb higher. People are mostly speculating on just how good this card is, but I think once people start playing with it and it starts popping up as a four-of in every aggro deck, this card will reach double digits in a hurry. Colorless format-staples have a tendency to skyrocket and given the lightning fast look of the format, I predict this card will be the most played card in the set!

Some deck lists are beginning to pop up with this card, but I suspect it will prove to be the best way to cheat giant monsters out. Emrakul, the Promised End and Ulamog, the Ceaseless Hunger are the most likely finds but Metalwork Colossus might also be involved. This seems like the best centerpiece to a blue-green energy deck.

This set is largely about Vehicles. Vehicles have never been seen before. People are still unsure how to evaluate them, much like miracles when those first came out. All the Vehicles are currently priced low. This one is the only mythic Vehicle and has multiple flashy abilities. I'm a believer!

If people ramp into Verdurous Gearhulk, as I expect them to do instead of playing cards like Nissa, Vital Force, then Fumigate will shine as the premier control answer to the metagame. Vehicles and Planeswalkers might throw a wrench in this plan, but it's still the best sweeper in Standard.

This is easily one of the best creatures in the set and I expect it to be a major player in both Artificers and Dwarves. In all likelihood Dwarves will prove superior to Artificers, but either way this one is an automatic slam dunk four-of in the deck. People are sleeping on Dwarves. Are you?

Smuggler's Copter is the best Vehicle, but Skysovereign, Consul Flagship and Fleetwheel Cruiser set themselves apart from the rest as the next best in the set. The Cruiser is basically a Skizzek that leaves behind its own shell, a self-driving car if you will. Competition at four and five mana is stiff, but it's hard to go wrong at $1.50.

This one might have some difficulty finding a home, but it's powerful and might even see Modern play. This is one that I'm least sure about, but I see upside here.

This one may end up being too cute, but I think there is a lot of upside here. A 10/10 is huge! If you're already playing Aetherworks Marvel and Woodweaver's Puzzleknot or Glassblower's Puzzleknot, this guy can come down on the super cheap!

A lot of Emrakul, the Promised End decks Implode without their namesake. This takes care of the problem all at once. This card's undoing may be Coax from the Blind Eternities, but I expect it to see Modern play too since three mana is worlds different than four mana in Modern.

Wow, this card is great! It pressure Planeswalkers and opposing life totals. It is a slam dunk four-of in Red-Green Energy Aggro, which I expect to be a big deck.

Imagine that feeling you get when your Ancestral Vision is about come off suspend. You get that feeling every single turn with this card! If nobody breaks this card it will be a sad time for Magic.

I have this card ranked in my Top 10 cards in the set. How it is under $1 currently I have no clue. Dwarves are the new Spirits and they may take off (literally, in vehicles) in an SCG Open in the first or second week. After this happens, I suspect Depala will be at least $2-3.

While not an all-star, she's a role-player. Her daughter is by far the most expensive card in the set, hauling in $50. Chandra's mom is only worth 1% of Chandra? Pia is literally a penny to Chandra's dollar. I don't expect them to join in a Cathartic Reunion at the same price or anything, but I have higher hopes for a character that mothered the main character of the story.

Not only is this a slam dunk four in the Red-Green Energy Aggro deck, I suspect it may be good enough on its own! The four-drop slot in green is actually not that competitive, and this creature is very good and hard to kill. I don't mind putting all my Verdurous Gearhulk counters on Bristling Hydra because it already has a one-shot protection-from-removal ability built-in.

Those are the cards I recommend invest in. Now let's talk about the cards I would sell now.

Don't get me wrong, I think Nissa is great! I just think $20 for a card competing for the five-slot in green with Verdurous Hulk is not going to remain the second highest priced card in the set. Well, it might, but even if it does, I think that price will be closer to $10.

Great in White-Blue Control, but likely unplayable in any other style of deck and unlikely to see play in Modern. $14 seems way too high. I'm thinking more like $5-7.

Unlike Dovin Baan, Saheeli Rai is unique in that she doesn't have the same competition. What else in blue and red costs three mana? (Not much.) While I think she has a better chance at retaining value, I also think she will drop in price. She doesn't seem to play defense well and I think there will be enough better cards to play in Standard that can play offense or defense.

I like this card quite a bit, but it's competing with Archangel Avacyn and Fumigate. Even in an Eldrazi Displacer deck it competes with Reality Smasher. While the card is certainly powerful, I suspect it may find itself homeless. Did I mention Skysovereign, Consul Flagship is also a colorless five-drop that every five drop will have to compete for space with? It's a steep uphill battle and $6 is a lot.

While cool and powerful, it competes with Drowner of Hope and Elder Deep-Fiend in blue decks that want a big creature. I'd be surprised if it became a major pillar of the format, but that's what it would take to remain above $5.

I suspect this one will see play as a tutor target in black-green decks, but that's about it. All the Gearhulks are powerful, but I suspect few will find homes.

I have the lowest hopes for this Gearhulk. It's objectively the least powerful, but also has the highest upside if variance shines on you. If Browbeat has taught us anything, it is that two strong options are not nearly as strong as either individually when the opponent gets to choose which one you get.

The card is strong, turning all your spells into either a cantrip or cascade. It is two colors though, which already places a big restriction on its upside. On top of that, it's a fragile creature competing for a four-drop slot in your deck, a slot typically occupied by Planeswalkers. I just don't see it happening, though I'm sure people will try.

Another powerful effect, but is it really going to outcompete Archangel Avacyn, Cataclysmic Gearhulk, Skysovereign, Consul Flagship, and Fumigate?

I suspect this will find a place in black-green as a tutor target, much like Noxious Gearhulk. It kills stuff efficiently, but it's not going to be a build-around card. I suspect it will wind up being a bulk mythic.

I love Flicker effects (as anyone who has followed my Modern interests already knows) but paying four mana for a card that does not immediately impact the battlefield is a recipe for disaster. If this holds value it will be for its Commander appeal. If you have intel on it being great there, it could be your golden swap because I'm basing my analysis on its lack of Standard applications.

Thalia, Heretic Cathar is great because you get this ability and a 3/2 first striker. I suspect any deck that would want this would rather have Thalia, and once you have Thalia this effect is redundant.

It's already the cheapest mythic in the set, but I see no reason to believe it will go anywhere other than plummeting into the bulk bin.

If Hangarback Walker weren't rotating out I'd buy. As is, I don't see it happening. Maybe when Aether Revolt is released all the Aetherborn will improve, but as of now I'm selling this one.

Last but not least… well, actually it is also least since it's only $1. Anyway, I'm selling Aetherflux Reservoir and I hope I'm wrong because it seems like a really sweet card. I just don't see enough upside. It's hard to set up and the payoff is so hard to achieve. You basically have to do the equivalent of transforming Thing in the Ice twice in a single turn to actually "go off" and deal the opponent 50 damage. When has that ever happened? Again, I hope I'm wrong, but I'm selling.

Which 3 for 3 are you Switching?

For ease of reference, here are the two categories. Pick which 3 from each category you would switch and post your picks in the comments to enter the contest. I'll declare a winner next month. The fewer the entrants, the greater your chances of winning an autographed high demand mythic rare!

· Authority of the Consuls