Last week I introduced Adamancipators with an in-depth look at Koty Angeloff's hot Gogogo Adamancipator deck. As we've seen Adamancipator cards climb higher and higher in price, it's clear the strategy isn't going anywhere; the deck's here to stay, at least for a while.

…Funny enough, I was about to crack wise and say that Adamancipators can't Ritual Summon, but since Doki Doki and an Adamancipator Tuner makes Herald of the Arc Light, and Block Dragon can search the Megalith Ritual Monsters… I can't even make that claim.

I think Adamancipators will have a hard time making something like Exodia work like Deep Sea Diva can, but even some of the most bland Adamancipator combos make a 1-card Abyss Dweller plus an extra draw. The worst-case scenario here is really strong, and the sky's the limit if you hit those excavations just right with Adamancipator Researcher, Adamancipator Analyzer and Adamancipator Seeker.

I'm excited to see Adamancipators grow in popularity and splinter into unique builds, but until then, it might be a good idea to pick up the cards now before in-person tournaments come back. A pure Adamancipator deck doesn't really exist, so today we're going to look at some of the best options that can compliment the theme. With the right choices you can elevate it and really make it your own.

Can't Lose If Your Opponent Can't Play Cards
As the competitive format starts to take shape through reporting of online tournaments, we'll eventually see some sort of firm metagame cemented out of the random assortment of decks that are winning right now. Without Regionals or major Championship events it's impossible to declare a consensus, but Adamancipators will no doubt comprise a large portion of successful decks.

Push the envelope a little and there are plenty of other stun cards right at your fingertips. Instead of making a Level 6 Adamancipator Synchro, go for Naturia Barkion instead and you'll totally dismantle trap decks like Altergeists and Palezoics. Consider adding Sentry Soldier of Stone, reviving itself from the graveyard or summoned off an Adamancipator Tuner; now you have the requirements for Naturia Beast.

The stun cards don't stop there. With Koa'ki Meiru Rock monsters, you can shut down anything your opponent tries to play on you whether it's a spell, trap or monster. I think Koa'ki Meiru Guardian's the most applicable Koa'ki Meiru Rock because you can summon it off an Adamancipator Tuner and stop hand traps during the turn.

Take that, Nibiru, the Primal Being!

Since Adamancipator Risen - Leonite works on your opponent's turn, sending your Koa'ki Meiru Rock to the graveyard's just as good as summoning it. Whatever kind of stun you're jonesing for it's always available, since you don't need to commit to a specific monster when you're starting your combos.

If you want to go further, Fossil Dyna Pachycephalo and Barrier Statue of the Drought can shut down summons and work just as well as any other Rock monster in your deck. Since Block Dragon adds them straight to your hand, theoretically any Rock monster is just a Saryuja Skull Dread away. Or if it's in the graveyard, it's easy to retrieve with Adamancipator Risen - Leonite.

But to keep things simple, remember that those monsters are summonable from the deck with an Adamancipator Tuner or Doki Doki, meaning any of those off-theme Rock-flavored threats won't disrupt whatever other Adamancipator combos you're aiming for. Even as detours, they take very little card investment and can add another dimension to the core Adamancipator gameplan. 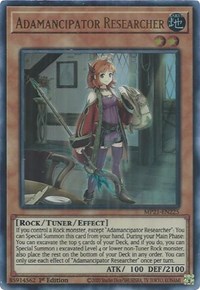 One Of Everything, Please
Remember how annoying the Original Orcust Combo™ was? Sure, there were plenty of ways to spin it, but the requirements were effectively "two monsters with different names" to make a Knightmare Link so you could kick off the combo with Knightmare Mermaid. Even if Adamancipators are the backdrop to your overall strategy, they can fetch some of the more generic Link Monsters that are popular right now.

Consider starting with Adamancipator Researcher, using its effect to Special Summon literally any Rock monster that comes up first. By itself with no other investment, that means a free Crystron Halqifibrax or Union Carrier right off the bat. Because you'll have access to so many Rock Tuners and non-Tuners, you're not forced to play either of those cards at a specific time to ensure their optimal use. It's free real estate!

All of that came from one card, and without factoring in Adamancipator Crystal - Dragite's extra draw ability, a free Sentry Soldier of Stone from the graveyard, a revived monster with Adamancipator Signs, or your choice of Rock from your deck courtesy of Doki Doki.

Obviously I don't want to build a deck that aims for the worst case scenario, but even if the rest of your hand got wiped out by Royal Tribute, Moulinglacia the Elemental Lord or Desert Locusts, it's comforting to know that even when everything goes entirely wrong, one single card can bring you roaring back into the game.

Now go back and factor in the crazy combos with Crystron Halqifibrax, Union Carrier and other generic Link Monsters, and the end result is quite simple: any combo your deck can do, Adamancipators can do it better. That's not always the case, sure, but very few decks right now can barf out as many monsters as Adamancipators can, as consistently and with such small asks. 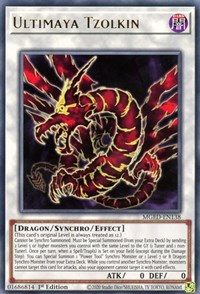 Let's Get Crazy!
Obviously Adamancipators will have competitive guidelines to follow in terms of valuing card economy and being smart about what you do. It's not always about making the most ridiculous boards possible, if those outcomes require a lot of luck or dead cards.

That being said, access to a beaucoup of free monsters does mean a dash of something out of the box will often outweigh its cost. Consider this specific series of cards in a combo:

With a newly drawn card in hand, your 1-card combo fielded three monsters, and now you have some options. If you use Adamancipator Seeker and your new Rock for Stardust Charge Warrior, you'll get an extra draw and can then overlay for Beatrice, Lady of the Eternal, yarding whatever you want to from your deck for… well, just imagine the combos.

Or you could make Coral Dragon with your two extra monsters, then send it away alongside Leonite for Ultimaya Tzolkin. Obviously the possibilities are endless once you factor in that Synchro Monster, but the modest addition of just one card allows some really sweeet niche plays. If you want to do a billion damage, make Assault Blackwing - Onimaru the Divine Thunder. Seriously, you can do pretty much anything you want for a 1-card investment.

Heck, Vulcan the Divine, Muddy Mudragon, and Dewloren, Tiger King of the Ice Barrier are all tech picks that come in hand for very specific decks; I'm not advocating for stuffing everything that you could play into one deck, but changing up one slot to suit a specific need won't damage your deck at all. Does playing some Fusion suite in the deck via Muddy Mudragon unlock some broken combo? I'm all for it since it disrupts none of your plays! The world's your oyster.

Or… your Dragon stuck in a gemstone, whatever metaphor works for you.

Keep in mind, Block Dragon searches Adamancipator monsters, Fossil Dyna Pachycephalo, Gigantes, and Doki Doki, but you can search other Levels as well to tailor your deck in specific ways. Gaia Plate the Earth Giant and Chaos Zone can capitalize on your other banishing monsters to get some extenders in play, but there's pretty much a Rock at every Level you can search.

Megarock Dragon's a Level 7 that you can summon from the hand for free, and Gigastone Omega fits the Level 5 bill if you want to build something that way. Heck, you can even play niche cards like Power Giant. Since Block Dragon's always just a Union Carrier away, whatever flavor you want won't break your deck balance. I have no doubt in my mind someone will figure out some extremely broken FTKs that all start with just Adamancipator Researcher.

Lastly, I will say that The True Name and Evil HERO Adusted Gold are options too, but they're both fringe plays that don't sync well with everything else. It wouldn't be me if I didn't at least call out a few cards like that!