Back on Make the Play Monday we opened up with Mardu Dragons, a somewhat unsung component (and potentially great choice) of the Standard metagame:

Mardu Dragons compacts tons of value into a small number of cards (while asking for not so much mana), and when you start off with a turn two Seeker of the Way or Soulfire Grand Master, Mardu Dragons can clear the path while slamming the opponent from multiple directions at once, snowballing that value with little or no incremental investment.

And then of course there are the games you just take over with Goblin Rabblemaster or the high end Dragons! (You don't need too many attacks for Kolaghan, the Storm's Fury to close out a game.)

Joining us as Celebrity Guest this week is Ben Stark. In addition to the many accolades you probably already know about, Ben was also the progenitor of the Mardu Dragons strategy; originally adding Seeker of the Way as a quality drop to the BR Dragons deck he ran at the Pro Tour.

Let's see what Ben has to say! 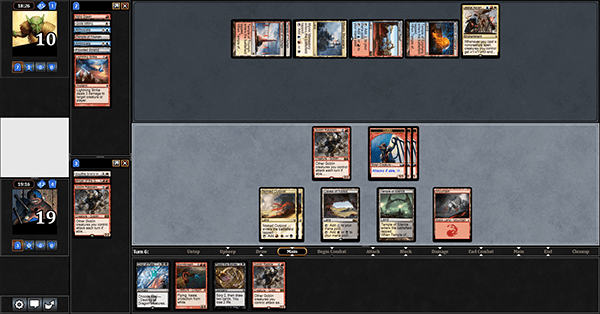 Like I said on Monday, Scenario One this week was "easy mode." I really just wanted to get everyone's brain-blood flowing for the next two.

"If it were game one I would cast Goblin Rabblemaster and attack for lethal so as not to show Stormbreath Dragon...but this is game three so the choice doesn't matter at all."

I'm of the same mind. In actuality I played the Stormbreath Dragon and attacked for lethal, but because the opponent is tapped out all you have to do is remember to trigger your Goblin Rabblemaster and attack with it in order to win the game.

The opponent is at 10 life.

You already have a Goblin Rabblemaster and three Goblin Tokens. At the beginning of combat you will get a fourth 1/1 Goblin. Four Goblins and the Goblin Rabblemaster itself is six damage, but the Rabblemaster's +1/+0 ability puts you in the winner's circle without having to cast an incremental threat.

The fanciest play is probably to cast Read the Bones, find an untapped land if possible, play it, and run out the second Goblin Rabblemaster in your hand.

...but it's not like "fanciest" is "best" and that doesn't make you win any more or less than the Stormbreath Dragon, or nothing at all.

How about the more nuanced scenarios?

"Then I would cast Seeker of the Way and not block the Pain Seeker if it attacks, because we will Draconic Roar it next turn and hit with our 3/3 lifelinking Seeker."

From my perspective the important things here are that we already have our next couple of land drops lined up...but because one is a Haven of the Spirit Dragon we can't necessarily play our Crackling Dooms.

Per Ben's take, Swamp is superior to Mountain because the possibility exists that we draw basic Mountain the following turn. If we crack for Swamp, that's awesome (and we probably become an overwhelming favorite). If we have Mountain instead, we might draw another Mountain; much less awesome.

An alternate play is to Smoke the Pain Seer immediately with Draconic Roar, which actually helps our best mana draws as he can't sandbag an Edict effect on an indestructible Ensoul. But the difference between playing this deck with a 2/2 in play and playing it just as a one-for-one deck assuming the Control is night and day. I do think you want to get the Seeker in play before you do much else, as that puts a serious clock on the opponent while you are removing all his stuff and even invalidating his best lines.

"Our opponent not attacking with the two Dragon Fodder tokens seems awful to me. Even if he has Stoke the Flames and Lightning Strike he should want to put us to seven and just have Stoke the Flames up for now.

"That said we can't attack him for lethal because it's only 12 damage if we dash Kolaghan, the Storm's Fury and attack with both dragons (and our opponent is at 13). He can very easily burn us out, so I would probably just cast Seeker of the Way and play the Temple and pass turn with three mana open and the Seeker and Dragon untapped.

"It seems highly unlikely he would burn us for seven with Stoke and Strike and try and alpha strike for the win if we do this because if we have any spell to turn on Seeker of the Way then we will gain life as we eat two creatures and be in a winning position. He can't assume when we make that play we don't have a removal so he will most likely burn our two creatures and attack for four down to five. This game is bad for us but still very winnable so I think it gives us our best chance to win."

Ben Stark's Play: Run out Temple of Silence, cast Seeker of the Way.

I took a similar approach to Ben, but chose the opposite creature.

With us on nine life and the opponent holding two cards - but choosing not to attack with some live Goblin Tokens last turn - the read looks to be Stoke the Flames + Lightning Strike in [his] hand. Those two together make seven life, and getting in with two attackers (presumably via attacking with all four Goblins) makes nine.

If the opponent indeed has those two cards there is nothing we can actually do to keep him from killing us on the cards. Ben's play can potentially disincentivize the opponent from making his above-scripted play (he doesn't know we have no non-creature spells to set up lifelink mid-combat).

I decided the opponent didn't have Lightning Strike + Stoke the Flames in hand. One thing that bugged me was that he didn't attack when the coast was clear last turn. I wasn't sure he was on a full-on bluff; but for instance I didn't want to invest a ton of mana in a big attack and lose my Dragon to a Stoke the Flames. To me not attacking was a signal for defensive Stoke the Flames rather than a signal that I might die on the spot.

This would be much easier if we could just kill the other guy!

With the opponent on 13 here there is no way with our mana situation we can kill him outright. Kolaghan, the Storm's Fury comes close, but close isn't cutting it against what our opponent is representing. For sure I'm not attacking with Stormbreath Dragon. It's more a question of who I play next to Stormbreath Dragon for additional defense.

The one you definitely don't want to play is Kolaghan, the Storm's Fury as a hard-cast. To non-Dash that creature (i.e. to let us keep it up for blocking) into play would require a sixth land. We are positioned badly to realize that line: we have an untapped land, but it will cost us a point.

The game is looking close enough without inadvertently turning a card like Wild Slash on.

The reason I played Stormbreath Dragon instead of Seeker of the Way is that I assumed the opponent wouldn't kill me. Like I said before, I wanted to have tons of Dragons in play so that when I played Kolaghan, the Storm's Fury I would have a higher likelihood of victory on the spot. Seeker of the Way synergizes to some degree, but can be blocked by a ground Goblin so does not guarantee lethal unblocked.

This week I want to focus on the second and third scenarios given that Scenario One was an easy mode freebie (that could be won equally well many different ways). Ben and I agreed on Scenario Two but differed on the tense third scenario.

How about you all?

For agreeing with Yours Truly, Brian Hunt picks up a $25 TCGplayer.com gift certificate.

While many of you came very close, no one managed to come to the same conclusions as celebrity guest Ben Stark did this week. As usual, we will be saving this week's second reward for a later date, so be sure to stay tuned for future triple-reward Fridays!

Congrats Brian, and thanks to Ben for participating! Make sure you send a message (not a wall post) to our Facebook page - MTGatTCGplayer - to claim your prize!

Ben Stark ushered in the age of Caw-Blade by winning Pro Tour Paris with it! He has a long list of accomplishments including many Grand Prix and Pro Tour Top 8s, and has earned a spot on the Pro Tour Hall of Fame. You can follow Ben on Twitter at @bens8528.