Now seems like a good enough time to talk about my selections for the 2014 Magic: The Gathering Pro Tour Hall of Fame. Other than last year when I voted only for William "Baby Huey" Jensen, Luis Scott-Vargas, and Ben Stark I have used all five votes every other year (and now this year).

This year I am voting for Guillaume Wafo-Tapa, Paul Rietzl, and Makihito Mihara, all of whom I think have very good chances to make it in this year. In addition I voted for Eric Froehlich, who I considered voting for last year, but didn't; so my EFro vote had a time counter coming off this year.

My last vote, though, was a little more controversial: Tom Martell

I have known Tom well since before he became a Pro Tour mainstay, and can distinctly remember a time when I was better at Magic than he was (or at least could convince myself that I believed that); but I would not have taken him seriously as a candidate but for an article on the Mother Ship by Brian David-Marshall.

Like I said I wasn't really considering Tom but BDM's article had me do a double take. Tom isn't just good; he's unbelievable. Tom's three-year median finish is 16; which is unbelievable. But what is more insane is that his lifetime median is 32. To put this in perspective, he's really only played 15 Pro Tours. He qualified for the Hall of Fame from some bogus PT he played as a kid fourteen years ago (which admittedly got the clock ticking) but the meat of his career has been in the last few years only. Lifetime medians of 32 and three-year median of 16 mean that Tom is pretty much always in contention for Top 8. Of course he is a PT Champion, cut his Top 8 teeth with the best Standard deck of all time, and is riding a Grand Prix win over the past few months.

I don't think Tom is going to be a popular pick this year because folks would rather vote for players who have a lot more bad finishes (but still more total finishes) than Tom, but for me, his short (serious) career should have us re-thinking how we evaluate Hall of Fame candidates.

And this week, lucky all of us, he is Flores Rewards Friday's Celebrity Guest.

"I would mulligan this hand, and I'm going to give a math heavy justification for my decision.

"First, how bad is a mulligan on the draw with this deck? I don't actually have the data to tell you (I should really do the work at some point to quantify this), but my off-the-cuff guess is I'm probably not giving up a ton. Assuming we start out 45% to win (since we are on the draw), let's say I'm now only 38% to win.

"How bad is it to miss our second land drop? It is really, really bad. Against an aggressive deck, we would then have to hit an untapped white source on turn three or we would likely just get run over. Against a control deck, falling behind on mana will let them stick a planeswalker or an AEtherling aggressively and kill us. I would say we are at best 5% to win a game under these conditions, and that might be generous.

"With Quicken + a draw step, we have two chances to find our second land on turn two. This gives us a 75% chance to make our second land drop, which sounds great but really isn't. It means we are losing the game 95% * 25% of the time, or 23.75% of the times we keep our hand.

"This means we can only lose 14% of the time we hit our land or else we are doing worse than we do with our mulligan assumption. We are obviously losing way more often than that. Our second land might be an Island or a Mutavault, and we still can't cast anything. We might hit a white source but no third land, and can't get our Divinations online. We might hit perfect running lands, but that leaves us just "in the game" on turn four and far from a big favorite.

"My guess (without working through more math) is that we remain a substantial underdog even in the best case scenario of drawing an untapped white source on turn two. 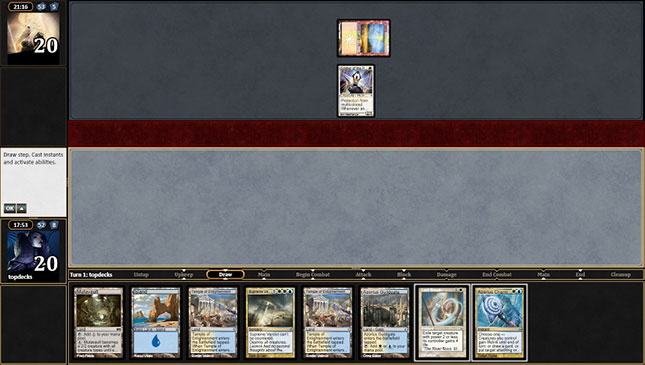 Which land do you play?

"We definitely want to play a comes into play tapped land here to ensure we have white mana on turn two, so the question is do we want to scry now or scry later.

"We should delay scrying if the additional information we gain over the next few turns would be highly relevant or if we are going to put anything we see on top. What I mean by the second condition is if we are happy drawing either a land or a spell, we shouldn't waste a scry.

"We are unlikely to learn too much more by waiting. If our deck had a lot of narrow cards in it (say, Disenchants) and we wanted to know if he played an Underworld Connections before we had to decide about scrying an answer to the top, we might want to delay using our scry until we have a chance to find out how good those cards will be. Similarly, if we've left in a small amount of creature removal against a UW deck to keep them honest for when they bring in Nightveil Specter, we might want to wait until after turn three to use our scry. If we were to scry on turn one and see a Last Breath, we wouldn't know if we should keep it on top or not.

"In this situation, we know our opponent is playing a creature deck so removal is great. It is pretty unlikely we have any narrow, situational cards in our deck at this point. We are also already a mana heavy, so we really, really don't want to draw another land. This is the perfect setup to scry. We bottom any land and we can keep basically any spell on top.

"I think this is a clear spot to play Temple of Enlightenment over the Guildgate." 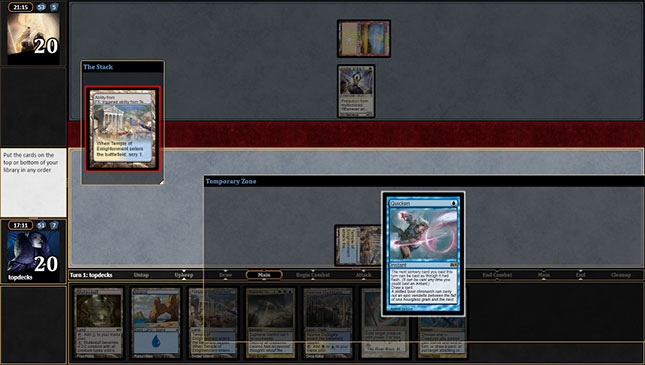 "I would keep Quicken on top. With Verdict already in hand, Quicken offers us some positive potential utility and is not just a blank cantrip. We also already have multiple two mana removal spells, so we aren't in urgent need of anything. We can also easily sequence it into our turns to cycle it if we need to, trading it in for a random card at little cost.

"If our hand didn't already have an answer to the Soldier, I would definitely bottom the Quicken."

I think that arguably the weakest element in the average player's mulligan algorithm is that he mulligans only in terms of whether he likes the balance of mana in his hand. This is a hand that doesn't look too friendly on the mana balance front on its face, but isn't really that bad when you look at things in context.

For one, we are favored to hit our second land prior to our second turn. There are 26 lands left in our deck and only 53 total cards; so we have 26/53 on our first draw and 26/52 on our probable Quicken-cantrip-draw if we miss and then 26/51 on our second turn pull (basically three coin flips).

How about hitting a white mana? HItting white to continue our cantrip chain via Azorius Charm is less rosy, not just because hitting a white land is mathematically more restrictive than hitting any old land, but because so many of our white lands come into play tapped. Would there be some mana balance advantage to hitting Temple of Enlightenment? For sure! But it comes into play tapped, so can't help us hit cantrips the turn it is played.

Imagine everything goes our way and we cantrip into land, cantrip into land, and now have three lands to play our Divinations. We've certainly hit our lands! But we're tapping out to keep basic resources flowing, and therefore aren't defending ourselves. We do have Supreme Verdict as a "catch up" card, but that costs WW, which is exactly the number of white lands we are short, based on our hand.

More-or-less if you didn't like the hand based on mana balance, you were right but myopic. The correct reason not to like this hand is that it is at a disadvantage even if it gets everything it wants.

In the dark I assume I am playing a Monoblack Devotion, UW Control, or RW Aggro / Burn deck. There are other decks, sure, but I can't imagine all of them at once. Which of these three big decks is my hand good against?

Monoblack Devotion on the play might just take my Quicken with Thoughtseize! That would be atrocious and invalidate our whole line of keeping.

And UW Control? That matchup is largely about hitting your land drops. It's possible we can hit land drops, but if we're aggressively underpricing to hit lands, it is likely we're just going to lose to the opponent tapping for a semi-soft lock the turn we tap for a Divination. It's tough to find a hand that is so weak to UW Control due to no lands, and manages to have a weak Supreme Verdict in hand.

Yet RW is worse than either. Imagine the opponent sticks Eidolon of the Great Revel on the second turn. If we need to cantrip to hit our land drops, we are going to compound the Eidolon impact.

There is a reason we have the mulligan rule.

Which land do you play?

If I had two Azorius Guildgates and one Temple only, I'd save the Temple and play one of the Guildgates. But I don't have to preserve all my Temple scry triggers. Because I have an extra one, I can burn a trigger this turn and improve my hand and still have one later.

The reason I'd keep Quicken here is the up-side. Worst case scenario we can burn it to draw. But I am thinking of the not-worst case. We know he has creatures and we already have a Supreme Verdict. We can easily hit a two-for-one if he gives us the open… But with Quicken, we can do something like take down attacking Mutavaults. The risk is minor and the reward is substantial. Easy keep here.Mike's Solutions:

Tom and I agreed this week!

Rami Dahud and Brian Froehlich did quite well on account of agreeing with me and Tom.

Make sure you send a message to our Facebook page - MTGatTCGplayer - to claim your prize! Thanks for playing and see you back here next Monday.