Today's article is the second part of the adventure we began on Monday, in Make the Play Monday - And Now for Something Completely Different.

In case you are just joining us, I would recommend going back to that article to pick up the original context.

For this article we are talking about a version of Abzan Midrange I played at a recent Preliminary Pro Tour Qualifier...and some of the things I maybe could have done a little bit better with it.

To wit / for reference / et cetera

Other than a couple of Fate Reforged changes and upgrades to the semi-soft locks in this Abzan Midrange build, the main innovation is the inclusion of Satyr Wayfinder as a catalyst. Satyr Wayfinder gives you something proactive to do on turn two, is a potential source of card advantage, and of course helps to set up Tasigur, the Golden Fang.

Which brings us to...

I. Find the Mistake 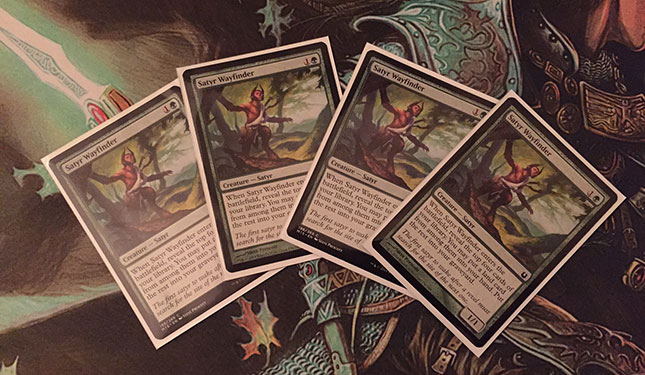 This one might have been a little non-intuitive for some readers.

Yes, there were some comments that it should have been Sylvan Caryatid. While I am not 100% sure that Satyr Wayfinder is a perfect fit for Abzan Midrange, I am relatively certain that Sylvan Caryatid no longer belongs in this strategy... At least not with main deck End Hostilities. Sylvan Caryatid was often sided out in previous incarnations / the pre-Fate Reforged metagame, and the current setup of the deck would encourage us to cut the 0/3 altogether.

Basically, these decks are starting to play land heavy (25-26 lands alongside cards like Satyr Wayfinder or Read the Bones). Plus, Sylvan Caryatid no longer plays very good defense. It can't really stop a Brimaz, King of Oreskos; and has problems blocking common two-drops like Seeker of the Way. While Sylvan Caryatid might be the most dominating creature in the history of competitive Magic: The Gathering, it just isn't well positioned right now in Standard.

So if the mistake wasn't playing Satyr Wayfinder instead of Sylvan Caryatid, what was it?

Well what's so bad about that?

My friend (and former Flores Rewards Friday Celebrity Guest) likes to tell a story of a PTQ he won, Faeries on Faeries. If I recall, Gabe made a seemingly risky play in response to his opponent's Mistbind Clique that could have had disastrous consequences. It worked out for Gabe, but if the opponent had had something, he would have been exposed.

"Why take the risk?" a nearby friend asked.

There was no risk! Gabe retorted. Gabe knew the opponent was holding an Island from a previous Thoughtseize, so when his opponent played a different edition Island, he knew he was free and clear for the dubya.

Right now in Standard Magic, there are lots of ways the opponent can know what you've drawn. Cards like Thoughtseize and Despise can give them a peek as early as turn one, and Courser of Kruphix (which Abzan Midrange plays) gives the opponent a constant stream of information.

It might seem like a small thing, but make no mistake -- an observant opponent can really sting you for playing different art on a card like this.

The mistake is that there are four cards from two different, identifiable, sets.

Remember this week I am just going over things that I wish I had done differently, so we are both skipping the Celebrity Guest and loosening up the requirements to win a prize:

II. Keep Bile Blight or Push it to the Bottom? 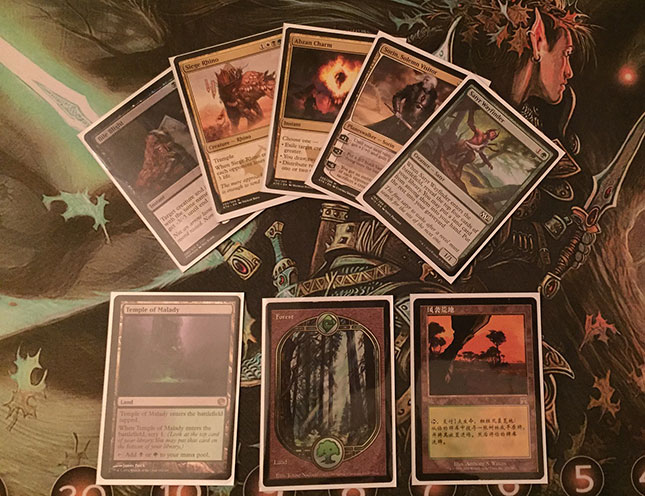 In this scenario I was up against a RW Devotion / Aggro deck with a seemingly good hand. My eight-card hand had great resistance in terms of blocking via Satyr Wayfinder and four-drops with built-in life point protection.

The hand also had a Bile Blight, which is a card I sided up to four-of for this game.

Unsurprisingly, I led on that Temple of Malady and saw a second Bile Blight.

The question on this one was whether it would be better to keep the Bile Blight where it was, or push it to the bottom of the deck.What I Did

All other things held equal, you don't want to push relevant spells. The biggest exceptions are if you need to hit a land, or if the spell might be relevant... But you can't cast it.

Plus, Bile Blight is one of the best cards against the opponent's strategy (which would further encourage us to keep it).

Keep is what I did.

I really wish I hadn't. :(What I Wish I Had Done

If I were just going to quote what happened in the game, I could complain that my fourth land -- an Urborg, Tomb of Yawgmoth -- was my top card the turn I conceded. If I had drawn it that turn, I would have hit four lands instead of languishing on three, and probably won with my Siege Rhino and Sorin, Solemn Visitor the next turn.

But you couldn't have known that I was going to be stuck on three lands, and there is nothing about this wonderful hand (I mean check out that Bile Blight, Forest, and Windswept Heath!) that says I am likely to whiff on the Satyr Wayfinder.

The real reason, I think, is that this hand is just too good. It can likely only lose if we stall on mana. We have every tool we could possibly want -- from quick removal to a good blocker to the mighty Siege Rhino -- to win the game. Because the opponent is going to need multiple cards to keep pace with not only Siege Rhino; not only Sorin, Solemn Visitor; but freaking Satyr Wayfinder...we really don't need spell density to win.

We just need to make sure -- MAKE SURE -- that we hit our fourth land. We keep tight, we can make sure that happens and win the game according to the numbers.

The better play, I think, is pushing the Bile Blight to the bottom of your deck.

Sidney Danger Rose agreed with me, and in so doing, earned himself a $25 TCGplayer.com gift certificate. 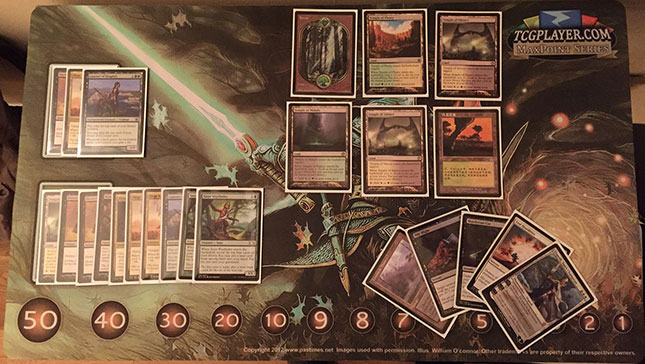 I think it is an important signal that the opponent let our Siege Rhino resolve last turn, and used a removal spell to kill it. That gives us a strong signal that our Elspeth, Sun's Champion could, too. I think that we want to play the Elspeth this turn instead of giving the opponent time to draw one of his small number of Disdainful Strokes (or even worse, a Thoughtseize).

The question is largely how to play that Elspeth, Sun's Champion.What I Did

What I did in this spot was to play the Llanowar Wastes out of my hand and tap six of my now-seven lands to make the Elspeth, Sun's Champion. I left the Windswept Heath where it was; as the general rule is, all other things held equal, to delay breaking fetch lands as long as possible so as to maximize the utility of Courser of Kruphix.What I Wish I Had Done

As soon as I made the leave-the-Windswept-Heath-and-tap-the-other-six play that I did I realized it was awful.

While the general rule is to keep fetch lands as long as you can, that's so long as you are maximizing your plays otherwise. There is a very good reason in this case to break the Windswept Heath in this case, leaving up one of the not-painful sources of black mana.

It is really non-intuitive here because Sultai Control is so creature poor (only Satyr Wayfinders in main deck).

What happened was that I made the Planeswalker, ticked up her loyalty, and put three 1/1 creatures onto the battlefield.

By the book, right?

Well he responded by sending a Hero's Downfall at Elspeth, and a Bile Blight at one of the tokens. This of course killed all of the tokens.

If I had had access to Murderous Cut, though, I could have just killed the token in response to Bile Blight. On its face this looks like a loss of card advantage, but if you think about it...we're probably never going to get a good look at this Murderous Cut this game. It's not really a loss of card advantage if we weren't going to use it anyway. If we were able to strip out the opponent's last removal card, but keep two power (instead of losing three, aka all of our power) we might have had two power to hassle him for a couple of turns.

Seeing that the opponent would be emptying his hand to make these plays, having two [additional] power could go a long way in actually winning the game.

And of course, that very next turn I was bereft of 1/1 Soldiers.

The game stretched out for many turns, as the opponent took control with his superior long game cards. I would have only needed five attacks with nothing else to win the game, had I broken my land and used my removal spell correctly.

Play the Llanowar Wastes; break the Windsept Heath for Plains or Forest; leave up a pain-free black-producing land to cast Elspeth, Sun's Champion.

Good job John...you did better than I did IRL. A $25 TCGplayer.com gift certificate to you!

Enjoy Thomas Skripka, Sidney Danger Rose, and John Goudy! Make sure you send a message (not a wall post) to our Facebook page - MTGatTCGplayer - to claim your prize!