The opponent has seventeen life and three cards in hand. Two of the life he doesn't have came from a Thoughtseize, played this turn, paired with an Ultimate Price (we had a poor little Elvish Mystic that paid that ultimate price).

Per Monday's Make the Play article, this is our weapon of choice:

...and this is the precarious situation we have gotten ourselves into: 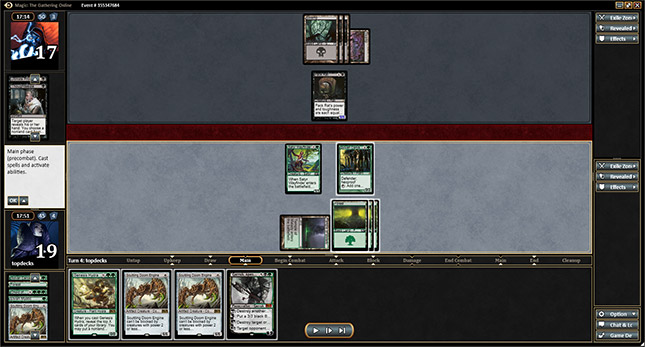 Of his four Swamps, one is tapped (for the aforementioned Thoughtseize) and three are open...three untapped, straightened, Swamps being exactly the number of Swamps one might want, when gripping three cards, to activate that most terrible of two-drops, Pack Rat.

For our part we have nineteen life and a couple of creatures: a Satyr Wayfinder and a Sylvan Caryatid.

We have one tapped Temple of Malady (played this turn) which pushed our second copy of Garruk, Apex Predator to the bottom of our library. This was done as a pre-screening maneuver for the Genesis Hydra in our hands. We have three untapped Forests, which alongside the Sylvan Caryatid, can help make a Genesis Hydra where X=2.

Our hand in total being:

The question we have to ask ourselves this turn is whether we should attempt that Genesis Hydra for two or not.

Helping to inform our decision is the contents of our graveyard, being:

So...Should we attempt a Genesis Hydra for two?

"Yes by a stone mile!

"This is so not close I almost can't believe you would consider any alternative play.

"What we really want to do here is to get another mana, and we have three Elvish Mystics, two Sylvan Caryatids, and our other Satyr Wayfinder to help us get a sixth mana next turn. We are not overwhelmingly favored to hit one of these cards, but we really want to hit our sixth land and Genesis Hydra can help us.

"Think about the alternative. If we hit our sixth land naturally we are committed to laying Scuttling Doom Engine next turn, and potentially the turn after that. And then if we hit our seventh mana, we might play Garruk, Apex Predator. In any case we might not have an opening to play the Genesis Hydra for three or four more turns.

"Missing the card advantage on the Genesis Hydra is not the worst thing in the world. We will have a 2/2 creature in play, which might discourage the opponent from attacking with Pack Rat. Anyway, our upside is enough we should definitely play it.

"One thing to note...I realize we are trying to see if we can guarantee a hit with the Genesis Hydra with the Temple of Malady play, but I think that is a mistake. In this situation I would have played the Genesis Hydra for two blind, and then played the Temple of Malady afterward. This sequence can dramatically help us hit our sixth mana next turn, which is more important than hitting on the Hydra in the abstract."

The most important thing that we are trying to do with Make the Play Monday and Flores Rewards Friday is to model good play. We look at situations that can plausibly come up, will likely come up for us in matches, and see what the best players in the world would do when they come up. The theory is that studying plays like this can help teach us to make the plays most likely to maximize our chances of winning when similar circumstances come up for us, ourselves, in the future. You know, such that if we know what Jon Finkel would do in a spot, we can, over time, chase Jon Finkel's results by making the same kinds of plays.

But what about the opposite?

We know that playing the Genesis Hydra for two is the right play "by a stone mile"...so I thought it would be fun to look at just how bad our circumstances might be if we made the wrong play.

Let's step back a moment and think about why someone might or might not play the Genesis Hydra.

● If we don't play it now, we might not have another opening to play it for three or four turns.● It can help us hit our sixth mana for Scuttling Doom Engine by turning over Elvish Mystic, Sylvan Caryatid, or Satyr Wayfinder.

Cons:I think the most "compelling" con against playing the Genesis Hydra this turn is that we might miss. We don't actually miss the opportunity to make a 2/2 for four mana or whatever (which no one would play Genesis Hydra for, let's be honest) but we might miss the two-for-one-ness of the card.

Just how bad is it to miss? Well I guess it would be pretty bad to completely miss, and then to hit a non-land with our topdeck next turn. But it's not actually that bad. There is one Scuttling Doom Engine in our graveyard and two in our hand; we have one copy of Garruk, Apex Predator in hand but the other one is literally the bottom card of our library. The only non-land card we can actually pull that we can't cast next turn is the fourth Scuttling Doom Engine. We are overwhelmingly likely to not hit that card.

There is just one factor that hasn't been mentioned yet.

Remember, right this second we are seeing just how bad it can be if we make the not-right play! 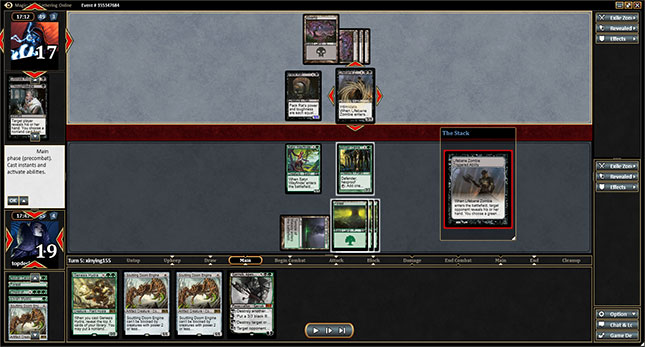 I made the play that Jon couldn't believe I would even consider and what happened? Of course the opponent had Lifebane Zombie.

Think about that for a moment…

What is the biggest disincentive to playing green creatures in pre-Khans of Tarkir Standard? Black decks might have Lifebane Zombie.

And just to kick a man while he's down… 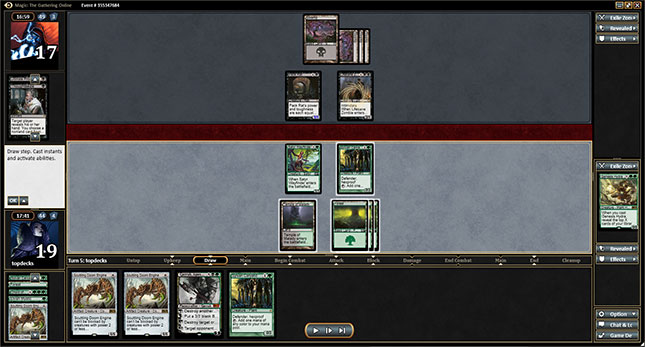 The top card of our library was Sylvan Caryatid anyway!

The player who taught me the importance of making the right play to the exclusion of others (some of which would often look pretty good) was Jon Finkel himself. The biggest difference between how Jon played and how most other people play is that he didn't lie to himself about judgment calls. "Well I made a judgment call and it didn't work out…"

Ever tell yourself that lie?

I think a spot like this one is a plausible one for someone to have made a so-called judgment call in the negative, gotten his Genesis Hydra nabbed by Lifebane Zombie [when he could have completely controlled for that eventuality] and would have hit the Sylvan Caryatid anyway...and never put together the pieces that if he lost, the single not-Genesis Hydra had damaged his likelihood of winning at least three different ways. Or at the very least chalked the "of course he had Lifebane Zombie" followed by drawing a Sylvan Caryatid [he could have Hydra'd into anyway] up as a string of bad luck events. But there was no luck here, was there?

One of the things I like about this spot (and in fact one of the reasons I brought Jon back as Celebrity Guest so quickly) is that this seemingly simple situation gives us great looks at all the famous Finkel quotes:

1. Focus only on what matters ("Finkel's Law") - Notice how in his solution all Jon wanted to do was hit his sixth land? How he even pointed out we should have played the Temple of Malady post- Genesis Hydra? That is because Jon is focused on what matters, what a successful Genesis Hydra might lead us to, not the Hydra itself. Hitting six mana is what we want. Whether we get card advantage or how good the 2/2 body is in transitional terms is just that, transitional.

2. "There's no such thing as a good play. There's the right play and then there's the mistake." ... "Yes by a stone mile!" Jon is decisive on this play (as opposed to last week, where he saw the plays as relatively close). While both Genesis Hydra and not-Genesis Hydra have their adherents, look at how bad the non-Jon path can be (Lifebane Zombie, Sylvan Caryatid on top). No guarantees either way, but I wonder...did you even consider Lifebane Zombie as part of your consideration criteria?

3. All things held equal, between two or more similar plays, the best play is usually the one that leaves you the most options. Whether we hit the Genesis Hydra for card advantage or not, not playing it on this turn can leave us in a spot where we lose it as an option at all. Either we get it nabbed by Lifebane Zombie, or we don't cast it for several turns due to Scuttling Doom Engine, other Scuttling Doom Engine, and Garruk, Apex Predator.

Even though it allowed me to illustrate some dramatically bad eventualities (and tip my hat to all the famous Finkel quotes) I am under no illusion that passing on the Genesis Hydra was actually a play we want to reward. Ergo "play the Genesis Hydra for two" will mark chicken dinners for both of this week's winner winners.

Just kicking myself on the Temple of Malady order, actually. Focus only on what matters, Mike!

Congrats on your $25 TCGplayer gift certificates Ashton Troia and Chance Marrott! Make sure you send a message (not a wall post) to our Facebook page - MTGatTCGplayer - to claim your prizes!

I'm taking next week off as we spend the week on Khans of Tarkir previews. Back in a few weeks!