For this week's Make the Play Monday / Flores Rewards Friday pair we shifted the focus to Limited.

Despite opening on some decent red cards I ended up in BW:

Not the best BW deck by any means, but full of play. And heck, we have one of the best cards in the set for Limited (and the reason we committed to white): Tragic Arrogance.

We have two scenarios here where we can potentially play Tragic Arrogance...but should we?

For this Limited adventure I brought along one of my favorite Magicians, and arguably the most powerful podcaster in all the planes of Dominia: Marshall Sutcliffe!

Marshall is the founder and long-running co-host of the wildly popular Limited Resources podcast (currently working with Luis Scott-Vargas on that one), and one of the key members of the Wizards of the Coast streaming coverage team. You'll probably be listening to Marshall when you tune into Pro Tour Magic Origins live from Vancouver this weekend.

Let's see what he has to say about these scenarios... 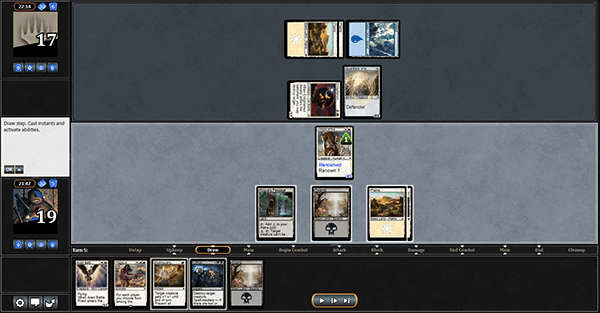 "We have a few options here, but only one I actually like.

"First up we could play our land, and use Unholy Hunger to kill the Guardians of Meletis. This is an overly aggressive play, as we already have the ability to get through it, and also because we want to try to set up the cards in our hand, two of which don't care about Guardians at all.

"Our unplayable Aven Battle Priest looks pretty decent when the opponent plays a 1/1 for two followed by an 0/6 for three. Tragic Arrogance is one of the better cards in the set, and the Guardians is very likely to fall tragically as a result of us (eventually) resolving it. Using premium removal on a card that A) can't block the flyer we will cast soonish, and B) will die anyway to our Tragic Arrogance is not a good plan.

"My play is to play our land, activate Rogue's Passage, and bash for four. We are facing no real pressure on the crackajack, and this forces our opponent to react by either building out their board to try to race us, or by finding removal for our Knight. Both of these scenarios play into the cards in our hand.

I landed on the same play as Marshall, but for slightly different reasons.

I (and others) have spent decades trying to unpack the unique combination of internal systems and beliefs that has produced Jon Finkel's unique position in Magic execution; did you know that even today, Jon has the highest per-game win percentage on the Pro Tour?

Jon has always stressed that in Magic plays are deeply contextual, and has therefore resisted the notion that perfect play in general can be modeled in soundbytes or consistent rules. That said, he has granted the universe maybe a lone general guideline:

All other things held equal, between two or more similar plays, the best play is usually the one that leaves you the most options.

Here we have a couple of similar plays. One is to destroy the Guardians of Meletis with Unholy Hunger — which will Remove the potential blocker from the equation — allowing us to get in with our Knight of the Pilgrim's Road. That represents a certain amount of damage, short-term.

The reason I like it, though, is that we don't actually gain or lose much in the near term by using a spell. The damage potential between Rogue's Passage and Unholy Hunger is no different for now; but using the Rogue's Passage helps to retain our options. And what great options they are!

Right now we are under no immediate racing threat. But what happens if the opponent plays some super-duper threat? We could probably benefit from having removal access.

Anyway, the way the game is lining up, we are in good position to win the race in four attacks (provided we sneak our Enshrouding MIst in there at some point) just using Rogue's Passage on our Renowned Knight. We don't have to do anything else to win the race right now; if the opponent wants to do something that would change that, we are best positioned by retaining our best tools.

It might bear mentioning that I never considered actually casting Tragic Arrogance in this spot; which would simply Remove a 1/1 do-nothing. 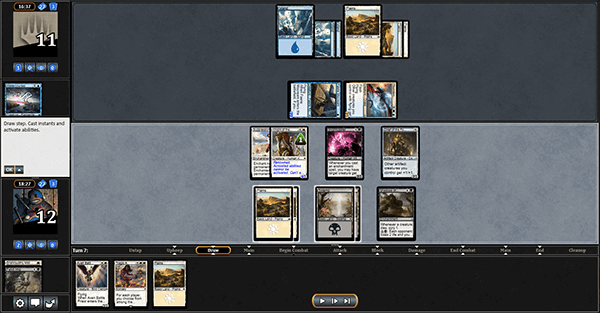 "In this scenario we have two options.

"Option 1. Play a land, attack for four, and pass the turn.

"Option 2. Play a land, attack for four, and play Tragic Arrogance, leaving our opponent with a 1/1 flying Faerie Miscreant and us with Blightcaster and Chief of the Foundry (remember, you can totally choose Chief as your artifact and Blightcaster as your creature).

"Of these two options, I would do Option 1. I would just play a land, knock my opponent to seven, and pass the turn.

"We win the race as the board sits, and the still-unplayable Aven Battle Priest in our hand gives us a play that not only swings the race math, but also stabilizes the board against the flyers from our opponent (once we draw a land). If something disastrous happens on their turn (like they cast a Sentinel of the Eternal Watch, for example) then we have a great Backup Plan in Tragic Arrogance. We can always keep our artifact creature and another creature while still getting more value from Tragic Arrogance."

Again I landed in the same spot as Marshall. Again I have a slightly different reason.

Leaving the opponent with just a 1/1 Faerie while we keep basically all our creatures (the Knight doesn't count as it is currently spoken for) + our Shadows of the Past puts us in a commanding position. But really, Tragic Arrogance is just a "banish your Thunderclap Wyvern" here. We can really get him good if we wait. He has to commit more resources or he will lose the race as the board stands, anyway.

Given that we are ahead with a potential source of life gain / racing already on the battlefield I say we stay the course for now, and just swing.

Marshall and I agreed on both scenarios this week. How did the community fare?

As a reminder, this is Flores Rewards Friday, so (for this week) two responders from Monday's scenarios will each receive prizes based on choosing plays similar to mine and / or Marshall's.

For agreeing with my plays, Ben Woodside wins a $25 TCGplayer.com gift certificate. Nice one Ben.

And for agreeing with Marshall's plays (you know, the same ones), Mike Turner also wins a $25 TCGplayer.com gift certificate.

Well played Ben and Mike! Make sure you send a message (not a wall post) to our Facebook page - MTGatTCGplayer - to claim your prize!

Hopefully my Limited game will be as on point this weekend! Wish me luck in Vancouver.

Marshall Sutcliffe is the co-founder and co-host of Limited Resources, the number one Magic podcast for Limited play. Marshall is also a full-time member of the Pro Tour and Grand Prix coverage team. You can see him in most official Wizards event coverage and follow Marshall's exploits on Twitter at @Marshall_LR.