This week's Make the Play Monday gave us a three-question setup...

Plays with two different scenarios, plus a bonus guess at this week's Celebrity Guest!

The deck in question was Matt Sperling's Top 8 deck from Pro Tour Magic 2015:

Matt cracked the Top 8 of a Pro Tour for the first time, adding a much-deserved feather to the Grand Prix Champion's cap.

Let's get to the questions...Scenario One:

In this one we're on the play and don't know what archetype our opponent is.

We can't play a spell on the first turn; but what land should we play?

Our Celebrity Guest -- which I would guess is a surprise to no one (or at least no one who had read Flores Rewards Friday - Careful What You Wish For) is Matt Sperling himself!

"Scenario 1: There isn't a turn one my opponent can have where I'd want to attack or block with Mutavault turn two instead of playing Young Pyromancer. The closest I could think of is if they play Legion Loyalist turn one you could consider trying to gain a life by passing back with Mutavault but even then, who are we kidding? Just take one and get your Pyro out.

"There are RR spells we can draw, namely Searing Blood and Eidolon of the Great Revel. So the trade-off is between concealing your colors by leading with Mutavault or preserving some optionality in the event we draw Eidolon or Searing Blood (we could draw Boros Charm too but we wouldn't want to cast it). If our opponent leads with Elvish Mystic and we draw Searing Blood - quite a parlay but possible, I still wouldn't be at all bummed out about leading Pyromancer first and Searing Blood second. There's a fraction of a percent of games where this approach will leave you facing a turn two Courser of Kruphix. I can live with that.

"What's more likely is that leading with Mutavault causes your opponent to worry that Swamp and Pack Rat will be the next cards you play, and they might Thoughtseize you on turn one instead of playing a scry land or a tapped Ravnica dual.

There are three different plays we can make here, and each one (or at least two of them) provides different incentives.

If we had a Shock in our opener, our decision would be essentially made for us. But we don't have a Shock, so Mountain is not an automatic play.

Mountain still gives us a little incentive based on Shock, namely the threat of Shock. It is possible an opponent would not play Elvish Mystic (or a GW beatdown one-drop) for fear of Shock. But I don't think that's realistic. I think that if the opponent has a one-drop he is going to play it and if we have the Shock, he'll play some different one the next turn.

Mountain has the disincentive of giving away a little information. We can conceivably be a Jund deck or a Devotion deck...but no one is going to believe we are a Boss Sligh or thereabouts and kept a seven-card / no one-drop hand. So, probably Boros Burn!

If you dial back to the very first Make the Play Monday / Flores Rewards Friday pair, you know that I like playing Mutavault on the first turn; I think just attacking with Mutavault on the second turn is a really underrated source of free damage. I wouldn't do it in this case (given my double Young Pyromancer hand, not even Thoughtseize is likely to stop me from playing Young Pyromancer on the second turn), but I am a big subscriber to the idea of making the right general play over and over to anchor future plays.

Mutavault has the incentive of hiding our archetype (we can be almost anything up to and including UW Control), and the cost is low.

But the cost isn't invisible!

It is possible the opponent plays an Elvish Mystic back and we rip a Searing Blood (which would have us kicking ourselves). But the chances we draw one of our few main deck RR spells is relatively low.

By contrast, I don't see much incentive to playing Battlefield Forge, which gives away more information than Mountain while doing less (given our hand); plus, I don't want to tap it at all if I can help it (probably can't, though).

It's our turn three (we were on the play).

Our opponent looks to be a green devotion deck. He's got a Forest and a Nykthos, Shrine to Nyx tapped for a Sylvan Caryatid.

Our board is: Young PyromancerMutavaultMountain(all untapped) 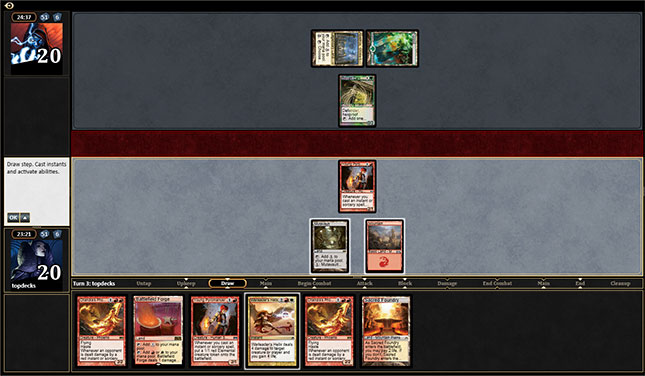 How do you play your third turn?

"Scenario 2: This one ends up being easier but the stakes are higher (messing this up is gonna hurt us way more than playing the wrong land turn one in Scenario 1).

"I don't know if any of you spotted this, but Mike tipped his hand here in Scenario 2 regarding his answer to Scenario 1 by drawing both examples from what looks like the same game. You can see the Mutavault on the left indicating it entered the battlefield first. :)

"Chandra's Phoenix, as it turns out, is great against Green Devotion. So few of their cards can stop it from being a consistent two damage per turn. Here we're on the play, we're set up nicely to race Polukranos or Courser or to kill Xenagos, etc., and NOT casting one or both Phoenixes in short order is the surest way to botch this and lose to one of the good four drops.

"Which land to play is also obvious to me at first glance. Sacred Foundry untapped caps our life loss at two points while playing the Forge costs us one life for sure but probably two or three. What's just as important is that whenever it's really close in terms of life points expended, and you aren't playing the burn mirror, it's best to get the Ravnica Shock land out of your hand so you don't telegraph later that you expect to spend exactly all your mana on your opponent's turn, and so that when an unexpected Temple or Mutavault shows up you already have the Plateau in play and you don't wind up taking an extra point or two from Battlefield Forge. The caveat to the caveat about telegraphing having spells in your hand to cast is that you can bluff having spells in your hand in the matchups where your life total isn't that important. Against green game one it's a race often enough that I think you just play the Sacred Foundry now, take two, and cast Chandra's Phoenix.

"If you aren't yet convinced, just remember there are four Shocks in your deck and think about how turn four is going to look if you draw one and played Battlefield Forge instead of Sacred Foundry turn three. It ain't gonna be pretty."

Matt is correct, the two scenarios were from the same game. And careful observers could have gotten a slight leg up seeing I played my Mutavault to start for Scenario One :)

In the second scenario I agree with basically everything Matt said.

There are basically three lines, one based on Young Pyromancer, and two based on getting in for two damage.

We can get two damage through in two different ways. One of them is to activate our Mutavault and attack for four (two will be absorbed by Sylvan Caryatid probably). This doesn't really advance our board at all; but for completeness's sake, I'd say finish the turn with a tapped Sacred Foundry. We can get paid off by Warleader's Helix the next turn.

The Chandra's Phoenix method of getting in two points is generally preferable to swinging with Mutavault, I think.

The question, then, is which land we go with. Battlefield Forge will only cost us one damage this turn, but will cost us a point every time we use it for red or white, and our hand contains double Chandra's Phoenix. Given what we know right now, it stands to reason we will want to play the second one for an attack for four in the air the next turn. Are we to take damage a second time? Playing Sacred Foundry and taking two this turn will break even on a double Chandra's Phoenix in just one turn.

Imagine we had to play our Warleader's Helix next turn; if we led with Battlefield Forge, our commitment would be -3; but if we went with Sacred Foundry this turn, it would only be -2. But like the title said, the difference isn't pronounced here.

Mike's play: Sacred Foundry into Chandra's Phoenix And now for the good stuff...prizes!

For agreeing with me, Ben McCrum wins a $25 TCGplayer.com gift certificate.

For agreeing with Celebrity Guest Matt Sperling (the same as my answers this week), Christopher Luther earns a $25 TCGplayer.com gift certificate as well.

Make sure you send a message (not a wall post) to our Facebook page - MTGatTCGplayer - to claim your prizes! Thanks to everyone who played and thanks for reading.

Matt Sperling is a Pro Tour regular and three-time Grand Prix Top 8 competitor; he won Grand Prix San Jose with Dave Williams and Paul Rietzl, paced the field at Grand Prix Vancouver, B.C. in January, and most recently cracked his first Pro Tour Top 8 in Portland. You can follow Matt on Twitter at @mtg_law_etc or check out his many-faceted humor, commentary, and Magic Blog The Sperling Grove.