This week's Weapon of Choice is a tricky burn deck. It is -- packed with cards like Lightning Strike, Magma Jet, and Stoke the Flames -- obviously a burn deck; and with it, library manipulation including the aforementioned Magma Jet, Fated Conflagration, and the archetype-defining Treasure Cruise...is tricky.

One of my favorite tricky burn deck players is Josh Ravitz. Josh first got on the Pro Tour Gravy Train with a Grand Prix Top 16 with Red Deck Wins, and cracked his first big event Sunday Top 8 with our Sensei's Divining Top / Wayfarer's Bauble / Beacon of Destruction deck; you know…tricky.

Josh, if you haven't figured it out yet, is our returning Celebrity Guest!

Just a refresher on our Weapon of Choice this week, Gareth Aye's Izzet deck: 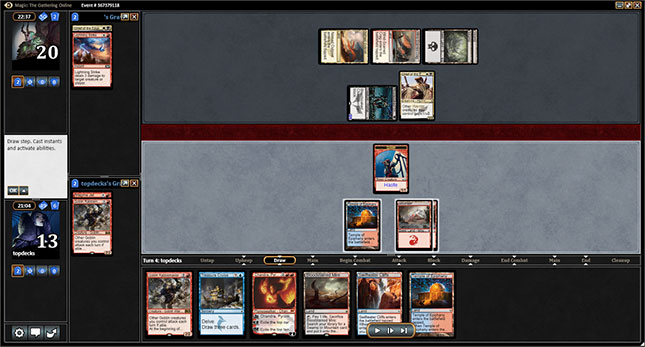 He's got a tapped Bloodsoaked Champion and the freshly-cast Chief of the Edge that is currently buffing the Bloodsoaked. All tapped out.

We've got a Goblin Token and three lands; we can play one of our lands, and have quite a few options:

What do you think, Josh?

"Heading into turn four we have a veritable boatload (excuse me) of options, though none of them actually involve the boat itself in this case. However, after some consideration I think there are three options for this turn.

"One: Play the Swiftwater Cliffs (since we have action for our hypothetical next turn in the form of Chandra) we don't need to waste a scry here. Don't forget to gain a life, and then play a post-combat Goblin Rabblemaster. It's important to play the Rabblemaster after combat so that it does not infect our other Goblin Token with a sense of duty and propel it into a suicidal combat step.

"Two: Crack Bloodstained Mire going to 12, play Chandra and eat his Champion. This I believe to be the best of all plays. It leaves us in a great position. We can easily chump his Chief to bolster Chandra's loyalty and we can attempt to grind some extra card advantage out of her while continuously dealing with the Blood-soaked Champion for which we have no real answer.

"There is a hidden third play among these options which may only work against an opponent who is not wise to our ways. If we can do it fast enough (so as to not appear to be up to any tricks) we should attack with our Goblin Token. If it induces him to block with his chief we can then kill his chief with the Chandra, which is a lot better than killing the ever returning Blood-soaked Champion. However, if our opponent realizes that he is the aggressor and that he is at 20 and that we must be up to something this won't work, and I'd prefer to take a safer route that doesn't involve our opponent making a bad play to work. If he chooses not to block we can play either of our cards (Chandra or Rabblemaster) but I still think this is inferior to option two since it allows our opponent to make a very important choice."

For my part, I opted for Josh's "Number Three" play.

I attacked with my Goblin Token and waited to see what happened. If the opponent blocked with Chief of the Edge, I'd play my Chandra, Pyromaster and kill it; if not, I'd kill the Bloodsoaked Champion.

The opponent -- who like Josh somewhat predicted -- noticed he was on 20 life and that one 1/1 attacker wasn't going to put a serious risk to his long term and chose not to block. That took Chief of the Edge out of Chandra target contention, so I killed the Bloodsoaked Champion.

The outcome of my play is largely similar to Josh's (dead Bloodsoaked Champion that can come back some time in the future; living Chief of the Edge)... The main difference is that I ultimately lacked the defensive Goblin Token to block his Chief.

I was okay with that because 1) the remaining Chief isn't big enough to take out my Chandra, Pyromaster anyway, and 2) he might have [had] something big enough to take out Chandra, Pyromaster anyway. So at least I got in a point. In this case, he used Butcher of the Horde as a kind of creature enchantment, ate his own Chief, and eliminated my Planeswalker the next turn. 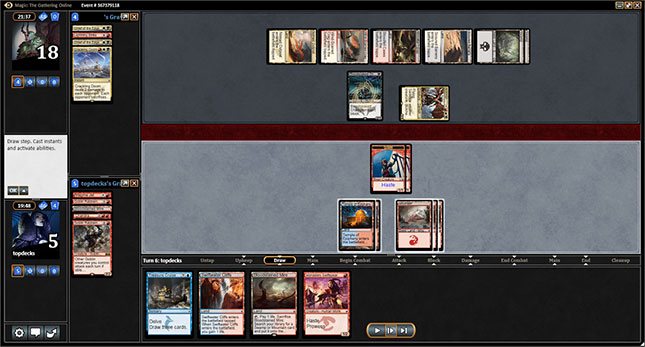 I liked this spot as a discussion point to begin with; but going over the battlefield position and going back and forth on it with Josh for this article, I actually SUPER love it now. This board position is nuanced and flush with small details that matter. Even if you identify the best line, making your plays in the correct order is ultimately rewarding, and goofing on just the order can cost you.

"This second situation is a bit stickier.

"We have to make some considerations before we make any choices.

"First, if we cast Treasure Cruise what happens? Can we kill Butcher of the Horde? In the olden days a red deck had almost no chance of removing a creature with four toughness from the battlefield. Times have changed, our deck has Sarkhan, the Dragonspeaker and four each of Stoke the Flames and Fated Conflagration — both excellent answers to the Butcher of the Horde. However, we only get to see three cards this turn if we cast Treasure Cruise, and if we miss it might be disastrous if we planned to hit instead.

"If we break our Bloodstained Mire and we miss on our Treasure Cruise we will lose the game, no questions asked. We can get out of this turn cycle alive if we play Swiftwater Cliffs, it guarantees us another turn assuming no burn or removal spell from our opponent.

"I think our IDEAL turn of events for this turn is something like this:

"Break Bloodstained Mire (four life), cast Treasure Cruise leaving up four lands including as many dual lands as possible. Cast Monastery Swiftspear, cast Hordeling Outburst, and then cast Stoke the Flames on the butcher by convoking with our freshly cast Swiftspear and the three tokens from the Outburst.

"But, since, we are far from guaranteed to "hit" our removal spell, I'd err on the side of caution and plan on playing Swiftwater Cliffs this turn and leave myself the option by not playing a land before casting Treasure Cruise.

1. Tap Mountain: play Monastery Swiftspear. 2. Tap three lands: delve five cards for Treasure Cruise (triggering Swiftspear). Since we don't know what we're going to draw we may as well set up our next Treasure Cruise the best we can. 3. [planned] Play Swiftwater Cliffs (trigger, gain one life). 4. [planned] Attack with ONE Goblin Token and Swiftspear for three damage.

"Maybe we'll draw one of our removal spells and deal with the Butcher next turn. Note that in the ideal world our opponent draws a land and doesn't play it, attacks with both his guys. We block his champion with our other Goblin Token and fall to one. On our turn we kill the butcher and we'll need to find a lasting answer for Bloodsoaked Champion, maybe a Hordeling Outburst is the best we can really do though. It's with this in mind that we maximize the amount of damage we actually do to our opponent, we have to kill him before that champion kills us."

There are a couple of things that signal our best line here.

The opponent has no cards in hand. He has live cards to draw and plays to make...but we can at least make him rip one as we have the tools to survive through his better-board-but-no-hand current position.

We have five life, but are holding a Swiftwater Cliffs. This means that we can survive through the next turn the majority of the time. Swiftwater Cliffs puts us to six, so even if we can't kill Butcher of the Horde, we can set up a [chump] block on Bloodsoaked Champion and walk away from a Butcher to the jaw with one life to keep going, possibly with lots more toys in hand.

For example, if we draw Sarkhan, the Dragonspeaker it is very likely that we will not live long enough to use it if we break Bloodstained Mire first. And Sarkhan is one of our few outs!

Like Josh, I opened up on Monastery Swiftspear. The thinking there is that if we are locked into playing Treasure Cruise, we might as well cash in on a Prowess trigger. Anyway, the Monastery Swiftspear is "free" for purposes of a Stoke the Flames Convoke. It has upside on Stoke the Flames but since we decided to NOT break our Bloodstained Mire and mana-overpay on our Treasure Cruise to begin with, it won't restrict our ability to play any of the outs or out-sets that we can now no longer afford.

Next, there is the question of playing the Treasure Cruise. I elected to play it with the five cards currently in my graveyard plus three lands.

Mike's Play: Mountain → Monastery Swiftspear, Delve five for Treasure Cruise...see what happens!"In reality" I drew the Stoke the Flames and ended up playing and breaking Bloodstained Mire post-Treasure Cruise. No reason to waste the Prowess trigger I had already invested in! In fact I got another and won the race against just the Bloodsoaked Champion.

With decks packing Monastery Swiftspear and Treasure Cruise dominating not only Legacy but now Modern (shout out to my www.toplevelpodcast.com partner Patrick Chapin and his perfect Modern performance with UR!) it seems decks like Mr. Aye's are going to be important to learn in Standard, as well. Monastery Swiftspear is an obviously-playable-but-deceptively-powerful card. And Treasure Cruise is already a cross-format All-Star; this duo is just adding another format to their collective resumes.

And now what everyone is waiting for...

Joshua Ravitz is the reigning Washington State Champion and has been playing Magic for about 20 years. Josh boasts numerous Grand Prix, Open, and Invitational Top 8 finishes, with his most recent professional level high finish a 3rd place at Grand Prix Denver 2013. You can follow Josh on Twitter at @jravitz and watch his ever-popular Magic stream at http://www.twitch.tv/jravitz