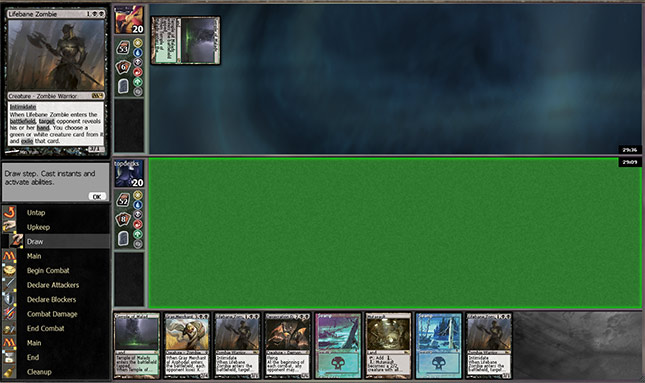 So interesting answers on this week's Make the Play Monday.

It probably doesn't surprise most of you that this week's Celebrity Guest is beloved former Number One Apprentice (and reigning Washington State Champion) Joshua Ravitz, this week's discussion, after all, being about his Opens finals deck.

"The first thing we should do here is examine our hand. Against some opponents I do think this hand would be a mulligan, but since we are assuming that we do not know what our opponent plans to do in the match this is an acceptable hand with cards that are good against MOST of the non-aggressive strategies we might face.

"We have ample creatures and if nothing goes too badly we should be able to win this game with just these four cards. However, our early game is lacking. It's important to realize we have nothing to do on turn two and that we should dig for a two-drop if possible, just to match them if necessary or get ahead in the event of drawing a Pack Rat.

"Now, we've seen Temple of Malady. This sets off the alarm for our opponent to possibly be playing the same deck as us, Jund Monsters or Junk Midrange, or perhaps some kind of constellation strategy. More or less we 'dodged a bullet' here by not getting killed on the spot for our keep. Against most of these decks everything in our hand is live, and in the mirror Lifebane Zombie needs to be answered (admittedly literally every card answers it, but still).

"Given our hand and our opponent's card the play I would make is Temple of Malady and I would opt not to miss my trigger. Now, as for the top of our deck:

"All lands are going to be shipped to the bottom.

"Finally, for Underworld Connections and Bile Blight the case is less cut and dry. I would hope not to see one of these here as to avoid the issue until I could confirm what my opponent is playing. Bile Blight and Underworld Connections are some of the very best cards in the mirror match, but against Jund Monsters they're both particularly weak and their value really varies against the rest of the decks that might be playing Temple of Malady. That being said, if we are assuming black is the 'best deck' in the format, and therefore the 'most popular' deck in the format, we may be forced to keep a Bile Blight in order to avoid a Pack Rat blowout.

"With that in mind, I would still not play Swamp or Mutavault on turn one. There are not a lot of situations where I want to attack with Mutavault on turn two, even if I have no other play. Putting Mutavault at risk is akin to suicide with this deck and while later in the game it's fine to trade a Mutavault for something your opponent might throw at it, or in its way, early on stunting your mana development is not something I would ever risk. Of course, that being said if we were facing down a tapped Temple of Enlightenment we could run the Mutavault out there on turn one and if they played a tapped land and we didn't draw any action for turn two attacking would be fine."

More than half of you thought Temple of Malady was somewhere in the "obvious" range; with a smaller group opting for Mutavault. For one thing, I don't see Temple of Malady as at all obvious (or even correct). Rather, I think that when you don't have a really scripted second turn play, many Mages just play their "enters the battlefield tapped" lands as a shortcut as they see it as a near term mana savings.

The range of plays here (outside of not playing a land at all, which would result in our discarding and missing our land drop) is just between Mutavault, Swamp, and Temple of Malady. As we don't have any plays to make [with mana] this turn, I would consider Swamp as being less near term than Temple of Malady.

So the real fight here is just between Mutavault and Temple of Malady.

What do we gain by playing Temple of Malady?

We get to tune our next draw. Our hand was keep-able but notably thin on point removal. The signal here -- at least from my perspective as playing this side of the table -- was THIS IS A MIRROR MATCH.

Or, (subtext included) THIS IS A MIRROR MATCH...and you are screwed.

If we're in the mirror match and the opponent has a Pack Rat (and we don't have a removal card), not only are we behind, we have two Lifebane Zombies that just aren't very strong against non-green / non-white decks. Heck, the other guy can even block.

All that makes Temple of Malady a pretty attractive option, given one huge assumption (we'll get back to that later).

What do we lose by playing Mutavault?

I don't think it is a hard sell to say that Temple of Malady is better than Swamp this turn. As we don't have a Thoughtseize (i.e. we have nothing to cast here) Temple of Malady just lets us front-load our "enters the battlefield tapped" penalty, which is potentially attractive given our curve of 3, 3, 4, and 5. Pushing on the Temple of Malady might therefore delay either Desecration Demon or Gray Merchant of Asphodel drops.

I think Mutavault is generally better than Swamp as well (though it is not as clear-cut); and that is because we might draw Bile Blight, blind. Assuming we are in a mirror match, Bile Blight is actually one of the relevant cards in-matchup, especially if the opponent has a Pack Rat packing for turn two.

But presuming we don't draw Bile Blight, Mutavault is better than Swamp here in pretty much every way.

What do we put him on?

I would be most scared of Pack Rat here; and would therefore favor finding a removal card (or maybe a Pack Rat). But we aren't dead-dead to a Pack Rat. We can actually curve into Lifebane Zombie and swing in. My guess is that most Pack Rat players would be loathe to trade with Lifebane Zombies, which might put us ahead in a race.

Further, if we can mana our way into Desecration Demon and Gray Merchant of Asphodel, that is actually pretty solid. Desecration Demon is big and effective against most Pack Rat situations we can project on the battlefield; but more importantly, if the opponent lets us race with not one but potentially two copies of Lifebane Zombie, we might very well have eight black pips in play when we drop Gray Merchant of Asphodel.

All of that is if we just get into a fistfight and he actually does have Pack Rat.

So what really happened?

The thinking there is if he played an untapped land on turn two I would play Temple of Malady on turn two, and if he somehow tapped into a spot where he couldn't Devour Flesh / Bile Blight / whatever my Mutavault I would sneak two damage in.

In reality he played a second Temple of Malady on turn two, so one up and one down. Boom, in for three.

Then, despite consecutive Temple plays, he missed his third land drop.

I pulled a Thoughtseize on turn three. I pointed it at him with the intention of taking his point removal card (if he only had one) so I could potentially get in with Mutavault again. Or, if he had more than one answer, I'd just play my Temple of Malady finally and plan for the four-five game.

His hand was not what I expected.

Obzedat, Ghost Council and two pairs of Courser of Kruphix for money cards.

I of course took Courser of Kruphix with my Thoughtseize and hoped he'd miss land again. He missed and I landed my Lifebane Zombie on turn four for the other Courser. On turn five I cast my other Lifebane Zombie for Obzedat, Ghost Council; swung in, etc.

All of that ended up perfect in part because he missed multiple land drops...

But more importantly because I didn't play Temple of Malady.

If I had played Temple of Malady I would have made decisions based on an assumption the opponent was the mirror, which might have gotten me destroyed. Imagine I had favored Bile Blight against an as-yet-unseen Pack Rat (most of us would have kept a Bile Blight and been very happy with that). And Bile Blight would have been atrocious against 2/4 Centaurs and 5/5 Ghost Councils.

You can't really make an argument around "well that all turned out okay" without invoking the wrath of the "that sure is results-oriented thinking" set; but I do think it bears some reflection because I actually came to the wrong conclusion on turn one, and if I had made the Temple play, I would have exacerbated what I felt was a sub-optimal position with my scry choice. Instead, I got some extra damage in, and, you know, didn't scry foolishly

So, in a spot with only two realistic plays, YT and our Celebrity Guest are split!

I talked to Josh about my play after he submitted his answer; we have one interesting revision. Which is to say that even though my play got two damage in, and even though it turned out the opponent was not a [terrifying] Pack Rat deck, had he been the mirror match, even if our Lifebane Zombies could have been effective offensively, the Pack Rat player in this case would have had all the options on how he wanted to answer or race.

For agreeing with my play of Mutavault, Ian Barnhart gets a $25 TCGPlayer.com gift certificate!

For agreeing with Celebrity Guest Josh Ravitz's play of Temple of Malady, Jordan Caldwell gets a $25 TCGPlayer.com gift certificate!

Make sure you send a message to our Facebook page - MTGatTCGplayer - to claim your prize! As always, thanks so much to the TCGplayer community for all your support of Make the Play Monday / Flores Rewards Friday.

Joshua Ravitz is the reigning Washington State Champion and has been playing Magic for about 20 years. Josh boasts numerous Grand Prix, Open, and Invitational Top 8 finishes, with his most recent professional level high finish a 3rd place at Grand Prix Denver 2013. You can follow Josh on Twitter at @jravitz and watch his ever-popular Magic stream at http://www.twitch.tv/jravitz