Well, we might as well get to the good stuff; seeing as, you know, the Celebrity Guest this week is the wielder of the strongest Kung-Fu of them all! 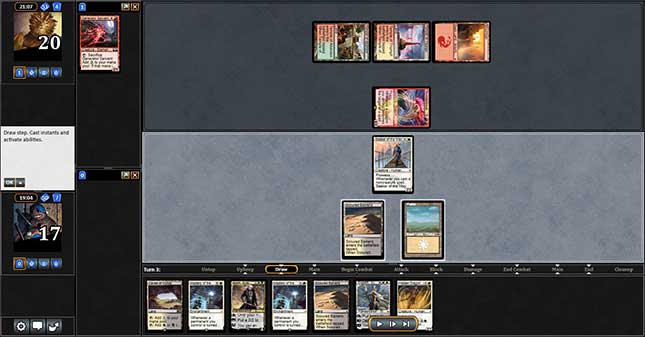 The Situation: Villains have just popped a Generator Servant for a fast -- and hasty! -- Thunderbreak Regent

● 17 life (we got one back from Scoured Barrens, four down from Thunderbreak Regent)● Seven cards in hand

"I'd cast the Hidden Dragonslayer face down.

"The plays are between Hidden Dragonslayer and Mastery of the Unseen; and Mastery isn't going to do much for us for a long time here.

"If you cast Hidden Dragonslayer you can megamorph it next turn, which will kill his Thunderbreak Regent, plus you will have a decent sized lifelink creature ready to attack or trade next turn.

"If something happens where you don't want megamorph your Hidden Dragonslayer, you can always cast Mastery of the Unseen next turn; and if you draw a land that enters the battlefield untapped, you can still play your Sorin, Solemn Visitor.

"I cannot understand the desire to play Mastery of the Unseen now that we've drawn Hidden Dragonslayer. You are actually LOSING life by casting it even though you trigger lifelink and get an additional point in from the Seeker of the Way because the opponent will get an additional attack in with the Thunderbreak Regent."

One of the things Jon has always maintained to me (personally) is that an important skill to acquire as a Magic player (or in general) is the ability to shift one's behavior based on changing conditions. Jon's particular opinions in this area are around evaluating expectation, and relating probability to prior probability given new data.

Mastery of the Unseen might have been the correct line to follow before we drew the Hidden Dragonslayer, but we are simply given a better option here.

One thing to note about this battlefield is that all other things held equal the Thunderbreak Regent is the best thing on it. It is going to take a lot of work for Mastery of the Unseen to change that; or a lot of time for Elspeth, Sun's Champion to change that. And while we can improve our position (and the efficacy of our Seeker of the Way) with whatever moves we make along the way, as long as Thunderbreak Regent remains the best thing about this board, we're going to be behind (or worse).

We're already behind on life, land drops, and card quality. While we have more cards in hand (in part because of the expended Generator Servant) we're a bit off on our ability to respond to his 4/4 creature with Elspeth, Sun's Champion. We could easily be dead before making our sixth land drop, which is three turns away even if we are lucky.

I thought Jon put it well that even though we are gaining life short-term with Mastery of the Unseen, we are actually taking more damage from Thunderbreak Regent at the same time.

I concur, ultimately, with his play. 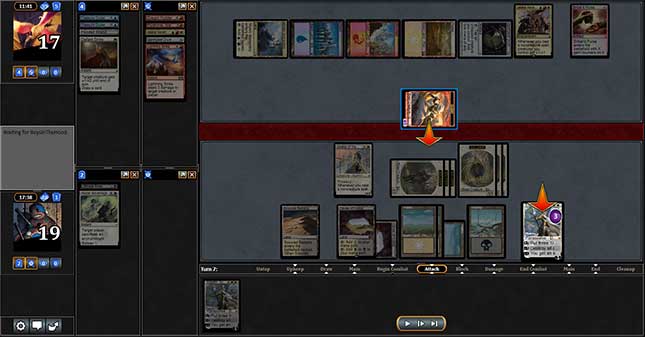 The Situation: Villains have made a 4/3 Goblin Token via Defiant Strike and Treasure Cruise, and are charging at our (merely) three loyalty Elspeth, Sun's Champion. We have defenders though...

"I would just block with just one token.

"The plays here are blocking with one token or triple-blocking with three tokens. Not blocking at all (and losing our Elspeth, Sun's Champion) is just terrible.

"The reason I would block with just one token is that his creature is a Goblin Token and three creatures is a lot to pay for that. Maybe next turn I can block with two or even just one and kill it. Right now three is a lot to pay.

"I mean it's a frickin' Goblin!

"The second-best play is to block with three tokens; I realize he is the Briber's Purse version, which makes it pretty close in this case specifically."

I guess I just have more respect for that one Goblin given his archetype than Jon does...but I agree the cost (essentially 75% of my best card for one turn) is a steep price to pay.

...which is still lower than a full copy of my best card, forever :)

My reasoning is just that the Briber's Purse version of Jeskai Ascendancy needs creatures on the battlefield to actually win; and with him gripping five cards (meaning he can probably do more with his next turn or so than I can) taking away the ability to actually win is attractive to me.

So...sign me up for the second-best play!

(At least he said it was close.) 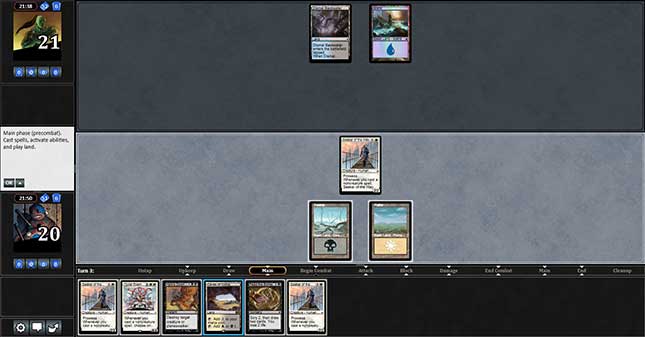 The Situation: We have a Seeker of the Way on board. The opponent has played two lands, we've played two lands; it's a question of what we want to do to help out our Seeker on turn three.

● Notable permanents: two lands (all tapped), Seeker of the Way

"I'd just cast the Read the Bones.

"It's a three mana spell. It buffs Seeker of the Way.

Jon Finkel's Play: Caves of Koilos into Read the Bones

I think this situation is slightly more nuanced than Jon; even though I made the same play he advocates in reality.

There isn't just one other play. There is a possible play of attacking with Seeker of the Way first, then playing land, then casting Read the Bones last. This is something I strongly considered because I think it increases your chances of getting Seeker in. The opponent is less likely to care about two damage in case he has to Counterspell something or destroy a more powerful creature than "just" Seeker of the Way.

If you play Read the Bones pre-combat you are signaling that you have no other moves (you played your land, you tapped all your land, your guy is essentially committed). You've basically opened the veritable kimono for your turn.

So anyway, that's what I did. And I got my guy Ultimate Price'd.

I did think attacking first and playing Read the Bones after was something worth considering and discussing though.

Playing Read the Bones pre-combat has some reward (namely one point of damage and three points of lifelink) but also some risk relative to attacking first.

...but nowhere near as much risk as playing a second Seeker of the Way!

The opponent is likely-if-not-certain to have Bile Blight and / or Drown in Sorrow. No interest in playing into those at this point in the game. There is a time and a place for dumping your hand on the table, and I don't think we're there on turn three.

Mike's Play: Caves of Koilos into Read the Bones.

Jon and I agreed on two-thirds of this week's scenarios; and the one point of disagreement was at least close.

For agreeing with the strongest kung-fu master Magician of them all Jon Finkel, Elliot Pierce earns $25 from our benefactors here at TCGPlayer.com. Nice one Elliot!

And for agreeing with my plays, Ben McCrum joins Elliot in the "I got a $25 TCGplayer.com gift certificate" club. Congrats Ben! Make sure you send a message (not a wall post) to our Facebook page - MTGatTCGplayer - to claim your prize!

See you in three days with another Make the Play Monday!

Jon Finkel is a fourteen-time Pro Tour Top 8 competitor and nine-time Grand Prix Top 8 competitor. He is a US National Champion, multiple-time Pro Tour Champion, World Champion, and Duelist Invitational Champion (immortalized as Shadowmage Infiltrator). Considered by many to be the greatest Magic: The Gathering player of all time, Jon was an inaugural inductee to the Pro Tour Hall of Fame. But you already knew all of that. Follow Jon on Twitter at @jonnymagic00 or check out his sometimes-stream at http://www.twitch.tv/jonnymagic00.