I'm flying solo on this one.

I know a big draw to this column is my bringing in awesome minds that don't necessarily write very often (or at all) like the greatest player of all time Jon Finkel or the godfather of card advantage Brian Weissman. But this week's hypotheticals are largely based on actual mistakes I made in testing, so I thought looking back on those mistakes and riffing on the adjustments (or even microadjustments) I would make moving forward would be most useful here.

It's a largely abused and misquoted factoid actually, as just doing something for 10,000 hours isn't going to produce mastery (especially if you do "the wrong thing" for those 10,000 hours); properly contextualized, the rule is about the quality of those hours, and the concept is actually about deep, deliberate, practice and figuring out how and where to make adjustments.

In that spirit, I like these hypotheticals as they give me some opportunities to talk about where things went wrong so that we know how to, a little better, in future, go right. 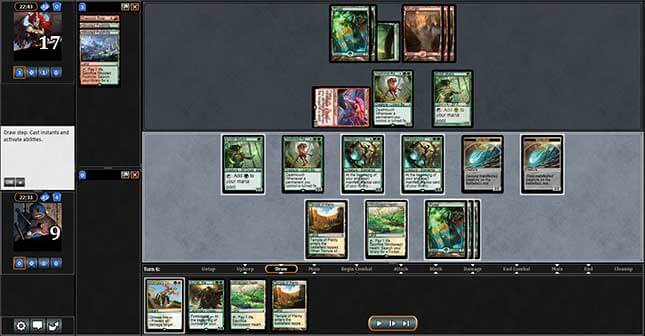 Tricky as it might be, "Outwit" is the freebie of the bunch.

Luckily I didn't screw this one up :)

You've got to figure the opponent is feeling at least pretty good about his spot, being at 17 life and having swung with that Thunderbreak Regent.

As you know, one of our face down creatures is a Fleecemane Lion (but that isn't really relevant).

What's important here is that we have five lands in play and have a land that can enter the battlefield untapped (the second Windswept Heath) available...so six total.

If the opponent had any cards in hand that might make a difference but luckily he doesn't so we don't have to think about any of that.

Six mana is exactly enough to play our Surrak, the Hunt Caller + our Dromoka's Command.

Our available attackers (once we play the Surrak, the Hunt Caller -- which we will gift with haste) are:

He can presumably block nine of this (a Whisperwood Elemental and Surrak, the Hunt Caller) which would bring the damage down to 12.

Well what if he can't block with two creatures?

If he can only block with one creature he'll block the Surrak, the Hunt Caller, which would bring our damage down to 16. Well unfortunately he has 17.

How are we going to get that last point? Well, how were we planning to prevent a block anyway?

We can get somebody -- almost anybody -- to fight his Elvish Mystic, leaving only the Deathmist Raptor to block. We can further give one of our creatures (anybody but Surrak, the Hunt Caller) +1/+1 to win in one swoop.

He can block 6 of that if he puts Deathmist Raptor in front of the now-six power Surrak, the Hunt Caller, which will allow him to live.

I gave +1/+1 to my own Elvish Mystic but it doesn't really matter which non-Surrak, the Hunt Caller creature gets the buff.

There are obviously variations on this, like which lands you get with Windswept Heath, and when exactly you cast Dromoka's Command (any time before blocking works).

This is a classic "pretty clogged up board" where a lot of players miss the fact that they actually have some overwhelmingly strong play (like winning at 100% rate) because there are so many plays that likely win over the next two to three turns. Easy one to miss in the context of an actual game. 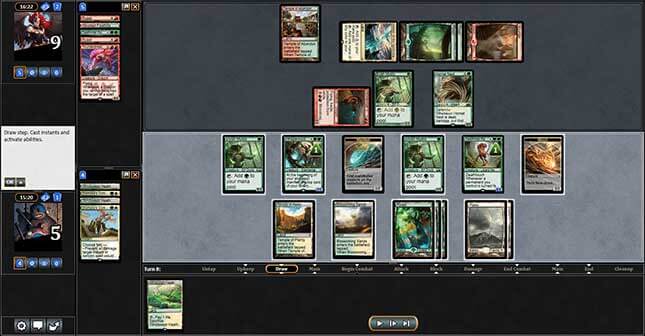 "Outplay" is a game that requires some gamble to win, or at least to keep playing.

The opponent has two cards in hand, so it is possible that -- depending on what those cards are -- he is going to be able to win next turn no matter what we do. There is no play we can make that will weather a Draconic Roar or Crater's Claws, for instance.

We can, however, play to narrow the number of cards the opponent can potentially beat us with, but it will require some cooperation on his part.

Imagine we attack with everything; the creatures we have are:

Even if the opponent didn't know that one of our face down creatures was Deathmist Raptor (he does) he would be obligated to block with both creatures as any number of mis-blocks here are all lethal.

There is a little bit of fatality to the opponent's play too, as if the wrong card is sitting under that manifest (say Fleecemane Lion) he's likely just dead.

The fact that he has to block with the Elvish Mystic is super important.

Because he has five lands in play. If the Elvish Mystic lives and he has a land in hand, he can go monstrous with Stormbreath Dragon and kill us. Whether we attack with everything or not, it is imperative that we attack with enough creatures that he has to block with Elvish Mystic.

The big question mark here is largely around the Hornet Nest.

It's a question of how he blocks.

I think if we swing with "everything" (or almost everything) the natural tendency is to block Whisperwood Elemental with Hornet Nest and Deathmist Raptor with Elvish Mystic. This is in fact what the opponent would have done (if I had correctly attacked) (I didn't) (I know because I asked him).

That block is unfortunately wrong... But it highlights our correct strategy and is, again, the intuitive block. YOU JUST GET ONE MORE GUY.

Do you see it yet?

Even one 1/1 flying creature is lethal because we are at 5 life and the opponent already has a 4/4 flyer.

Do you see it yet?

We can sacrifice the Whisperwood Elemental before damage.

That means that he will get zero 1/1 flying creatures, but still presumably lose his Elvish Mystic in combat.

Don't get me wrong.

We could still easily lose this game even if we 1) make the correct attack, 2) he makes the correct-for-us Hornet Nest-on-Whisperwood Elemental block...but we probably double our chances of winning by attacking, relative to doing nothing.

If we do some variation of "nothing" (i.e. he lives through the turn and his Elvish Mystic lives through the turn) we are dead to either "live cards" (something on the order of a Lightning Strike or a second Stormbreath Dragon) or untapped land (and there are tons of untapped lands in his deck). If we somehow kill the Elvish Mystic we are only dead to "live cards" because he will be unable to Monstrous the Stormbreath Dragon with the assets at hand.

Mike's Play: After much meditation on this topic I think the right play is to leave back one Elvish Mystic, attacking with everything else.

This would have us attacking with:

We need to attack with enough to force the opponent to block with both creatures. If he only blocks the Whisperwood Elemental we get in for 11 which is two more than his life total (assuming we flip Deathmist Raptor into a 4/4 megamorph).

Why leave back Elvish Mystic? We cut off Goblin Rabblemaster as a live kill, even if there are other routes for the opponent to win.

We should also play our Windswept Heath just to protect ourselves from Stormbreath Dragon in the case that the game somehow drags on to the point where nugging us for one or so becomes relevant.

(We obviously aren't planning to win this turn, and any number of things could keep that Stormbreath Dragon home next turn.)

What I actually did: Play my Windswept Heath only.

Then he played a land, went Monstrous, and killed me with his now-huge flyer.

The sad part is that I actually saw the Whisperwood Elemental play but didn't see the Elvish Mystic half (which would make the Stormbreath Dragon big enough to kill me). I was trying to get enough material on the battlefield to overwhelm him in case he made the correct block. 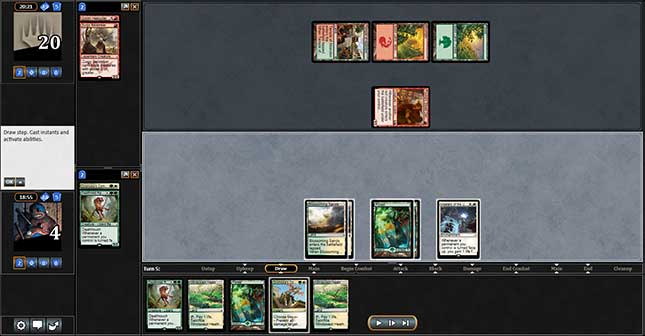 There are three huge immediate things, and we need to pay attention to approach the right line, let alone the right play sequence:

We are about to make our fifth land drop, so the implication is the opponent has missed already. Plus, his deck is probably land-light.

What does four damage?

How much does Stoke the Flames cost?

Three lands plus one creature for convoke is just fine.

My thinking is that we cannot allow the opponent to untap with a creature in play. If he has Stoke the Flames we are obligated to at least prevent him from killing us with it THIS turn.

Lightning Strike won't kill us unless we serve ourselves up on a silver platter; so our land drop should be Forest rather than Windswept Heath.

Ergo I think the best sequence is:

There is a line where we leave up GW in the hopes of drawing out his burn spell (and we counter the bejeezus out of it) but I think that would be needlessly greedy and have us down a rabbit hole more likely than in the winners' circle.

What happens if he just draws and says go?

By the way, assuming he has Stoke the Flames, there is nothing stopping him from just drawing a land; but given that he's missed a drop or two, he isn't mathematically favored to hit one this turn, and provided we live through it, playing our Deathmist Raptor face down allows us to get out of Stoke the Flames (or at least "just" Stoke the Flames) next turn.

Which brings us to...

My actual play was slightly worse because a 2/2 Deathmist Raptor is still plenty big enough to kill a Foundry Street Denizen and live (especially with that +1/+1 coming), and we retain the opportunity to gain life with Mastery of the Unseen (which would bring us out of Stoke the Flames range). With my play, having a face-up Deathmist Raptor, we don't get a free shot at 2 life, which is obviously relevant against a red deck. Keep in mind there is a further stack opportunity to play better and gain slightly more edge when we do flip up our Deathmist Raptor next turn!

Like I said, I had a reason for going solo on these; well, two reasons on two mistakes!

A lot of the time people see seemingly straightforward decks like GW Aggro and assume they are equally straightforward to play. But in reality, eking out every last point, eking out every last edge, is the difference between winning some games and lots of games. It could easily be the difference between qualifying for the Pro Tour and not even making Top 8.

Playing through these sequences was humbling for me. Hopefully you can see how deeply we can Meditate on plays for a deck that seems otherwise so straightforward.

While you may have done better than I did, unfortunately, no one seemed to get all three correct, with the second and third scenarios being the ones we were most in disagreement about.

In a Flores Rewards Friday first no one managed to get all the right plays!

I guess I was right about these being tough spots!

Do not fret, however, as the prizes for Flores Rewards Friday are assuredly reserved for the readers. We will regroup internally and distribute prizes for a later episode.