It started with a brew.

Magic 2015 Core Set gives green a lot of new tools (as well as some old tools, repurposed). Chief among the new / new-old tools is Chord of Calling, which gives green decks a substantial level of power and flexibility. In a deck like this GW one, Chord of Calling can help access one of the many sources of card advantage; or a bullet solution to a particular problem.

Our problems this week involve a combination of these two principles: bullet solutions and Chord of Calling access.

How did you do?Scenario One

So it's game three and we've split the first two with our Jund opponent. He's conveniently drawn some Mana Confluences (but not a lot of mana-mana); as we develop, we Temple of Plenty into a Keening Apparition. 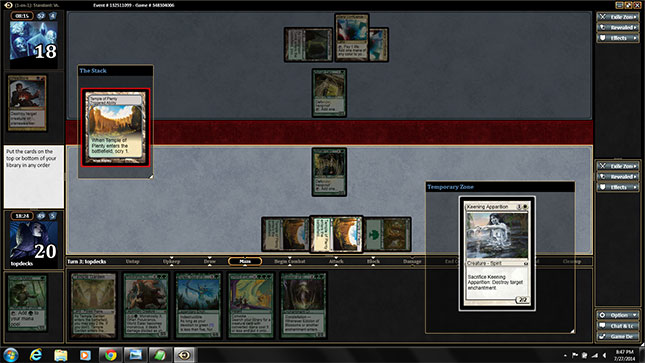 So Keening Apparition... Keep or no?

I set up this week's hypotheticals with some "how to play Ponder" wisdom from my good friend and multiple Grand Prix Top 8 competitor Josh Ravitz; let's see how Celebrity Guest Josh Ravitz Ponders keeping the Keening:

"Perhaps the easiest way to decide on whether or not we want to keep the Keening Apparition presented to us in the first situation is through a simple assessment of roles. This won't be that simple for us to do without knowing what our opponents hand contains, but we can just look at our decklist -- which contains essentially no removal -- and we can theorize about theirs, or use our a priori knowledge of their deck (we saw Doom Blades and Putrefies in game two, remember?) to make the decision. I'm further inclined to think that the two Mana Confluences he has conveniently drawn (convenient for us, naturally) could easily contribute to a blowout victory whereby he cannot even cast his final stabilizing spells because his life total is too low. Of course, in a long drawn out game where we've attempted to play "their game" they will probably find enough mana sources that the Mana Confluences can be set aside to tap friendlier lands.

"Another factor to consider is simply the mana curve we are looking at here. From their side, if they have Courser of Kruphix (the target for our would-be Keening Apparition) they'll need to play it instead of Stormbreath Dragon. This is favorable for us, in my opinion; Stormbreath is frightening for us, playing this deck -- as it usually is against Mike's decks, of late. A 2/4 that (maybe?) draws cards and gains one life a turn is not going to Threaten our large creatures or pressure our life total in the long run, and thus I think we can safely ignore this possibility.

"Finally, given our hand, what do we really want? Now this is the tough part. To make the best decision, we need to know what's available and while I don't necessarily agree, it seems that Mike has decided to sideboard this way for the matchup: -2 Ajani, Mentor to Heroes, +1 Banisher Priest, +1 Keening Apparition. (I like taking out Ajani, I just think I'd probably want the extra Scavenging Ooze instead of something else. I digress.) So now we have some new information to consider. First, if our top two cards are both Keening Apparitions (as they could be) and we keep the first one, I think we've effectively lost the game. Instead, if indeed we draw almost anything but a Keening Apparition I think we are pretty favored given the board. Finally, we can be pretty sure that if he had had a Courser of Kruphix he would have deployed it an effort to maximize his mana spending and thus efficiency, which makes me think that not only do we not really want to draw Keening Apparition here, it won't even be good.

"I'd like to take this time to just quickly point that it is dangerous to assign too much value to one particular card (i.e. Keening Apparition) based on one small sample of performance, which can then lead you down a very dangerous path of perhaps incorrectly (as we have done so here) sideboarding!"

Josh Ravitz's Solution - Push the Keening Apparition to the bottom of library.

Just to answer Josh's point, I sided in the second Keening Apparition (bringing us up to a whopping two) in answer to presumably four copies of Courser of Kruphix. I like them here because they curve favorably, potentially get some beat on, and honestly, don't take up too much space.

Of course if we really, really ever needed a way to kill an enchantment, we have Chord of Calling. Chord of Calling is actually the reason I shipped this Keening Apparition.

With the Temple Garden we have in hand we can presumably find Keening Apparition again if we really, really need to.

Separately (and Josh kind of touched on this in his response) we are advancing through to the mid-game at this point, and Keening Apparition is not going to punch in the same weight class as a Jund deck's main threats. As he hasn't played his Centaur yet, chances are he doesn't have one. And even if he did have one? What are the chances Keening Apparition is the card that saves the day once the battlefield gets filthy with Dragons, Hydras, and other Monsters various on both sides.

I'd opt to not keep this particular bullet.

Mike's Solution - Push the Keening Apparition to the bottom of library.Scenario Two

The opponent is about to charge in with a Stormbreath Dragon.

He is making it super big; so we have a decision to make with Monstrous on the stack... 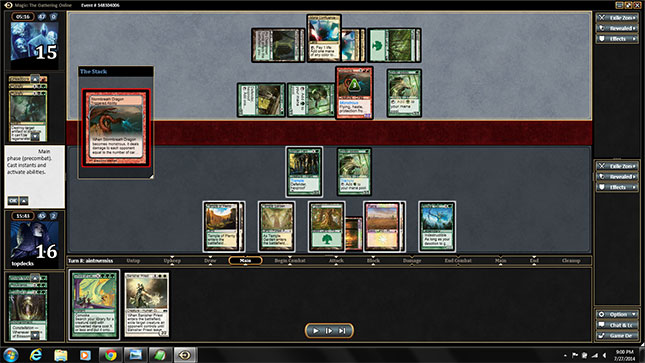 "This one is pretty simple. We do NOT respond to Stormbreath Dragon's trigger. Instead, we let him attack. We fall to 14 from the trigger and then 7 from combat. End of turn we Chord for 5 but get "just" a world eater. This turns on Nylea's Devotion and makes our board approximately 1200% scarier than it was when the Stormbreath attacked into us late last turn. Regardless of our draw step we have lethal damage on the board if we use seven of our eight non-Elvish-Mystic mana sources to increase Polukranos' power and toughness to 8/8. We fight the elf to clear out the blockers and gleefully win the game."

Josh Ravitz's Solution - Do not respond to the Stormbreath Dragon trigger; let him attack and find Polukranos, World Eater to set up lethal.

Like many of you, I agreed with Josh here.

There are two distinct parts of this play sequence, and they both give you the opportunity to make a mistake that could end the game the wrong way.

1. Do NOT respond to the Stormbreath Dragon Monstrous trigger. The attraction here is to get Chord of Calling out of your hand in order to take one less damage from the Storm Seeker part of the Monstrous activation. The problem there is there is no way to get the Chord of Calling out of your hand without tipping off the opponent not to attack. We have plenty of life and we need him to attack or we will have a huge blocker to contend with.

2. My first inclination was to get Sylvan Primordial . The opponent is out of cards, so we know the Primordial would be able to block and live. Unfortunately we're a little shy of seven. My next idea was to get Banisher Priest, but oh, protection from white. Man! Ultimately settling for Polukranos, World Eater seems fine. Polukranos will turn on Devotion to Green (giving us another 6/6...already paid for) while its own Monstrous ability will be able to clear the path of one Elvish Mystic while getting big enough itself to help win the game on the attack.

Mike's Solution - Do not respond to the Stormbreath Dragon trigger; let him attack and find Polukranos, World Eater to set up lethal.So this week the Celebrity Guest and YT had the exact same answers. Yay me!

Jim Collins and Jason Hudlin also had the exact same answers, so will be collecting $25 TCGPlayer.com gift certificates!

Great job Jim Collins and Jason Hudlin! You do us all proud. Make sure you send a message (not a post on our wall) to our Facebook page - MTGatTCGplayer - to claim your prize! Spend your $25 on something awesome!

Joshua Ravitz is the reigning Washington State Champion and has been playing Magic for about 20 years. Josh boasts numerous Grand Prix, Open, and Invitational Top 8 finishes, with his most recent professional level high finish a third place at Grand Prix Denver 2013. You can follow Josh on Twitter at @jravitz and watch his ever-popular Magic stream at http://www.twitch.tv/jravitz