In the Monday edition of this week's special column, we left you with a couple of questions.

And this board position: 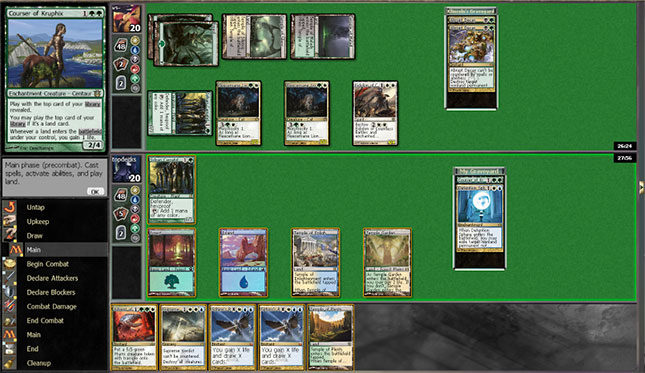 ...who would the Celebrity Guest be?

...how would we play turn six?

First off, of course the Celebrity Guest is Frank Lepore! That one was kind of a softball (but really, it was supposed to be). I was just so overjoyed to see our intrepid editor do well as a player that I wanted to shout it from the rooftops! Heck, it's not every week we throw in some extra from the old prize pool.

In fact, this is the only time we've ever done it. Don't get used to it.

So how would old Frank deal with turn six here?

"Immediately upon seeing this scenario I thought it was somewhat obvious. There's no way we want our opponent to untap with five mana in play while they have a single Fleecemane Lion, let alone a pair of Fleecemane Lions. The clear option is to Supreme Verdict. One thing that we often want to do with the deck is try and make sure we fire off any Supreme Verdicts we might be holding if we have something like Advent of the Wurm in our hand. The last thing we want to do is sequence the cards in such a way where we have to Wipe Away our own wurm; it's worth noting that Advent of the Wurm is often best used as a removal spell.

"As Temple of Plenty is the only land in our hand, we're going to play it one way or another. I would suggest we scry any non-land card to the bottom of the deck as we search for our sixth land. I could also be compelled to keep a Jace, Architect of Thought or a Kiora, the Crashing Wave, but I would be more reluctant as we're unsure what our opponent is going to play and we really don't want to miss any further land drops with two Sphinx's Revelations in our hand. So long as we can hit our land drops for the next few turns we should have a hard time losing this game, especially while our opponent is on two cards.

"As for how we tap, in this particular situation it shouldn't really matter, but I would err on the side of keeping the Temple of Enlightenment up so as to bluff something like Rapid Hybridization or Dispel (as this decklist has some fairly unconventional choices). The only card the opponent could possibly play that we couldn't deal with is either Obzedat, Ghost Council or Blood Baron of Vizkopa, but they won't have the mana for Obzedat, and our Wurm Token is fully capable of blocking a Blood Baron. (We're also at 20 life and perfectly able to take a hit or two from a Blood Baron.) This means we're more than likely going to untap and fire off a Sphinx's Revelation for two or three to make sure we continue to hit our land drops."

For my part, I didn't find the play nearly as obvious as Frank did.

You might remember from the original hypothetical that we had the shot at a Supreme Verdict last turn and I didn't take it. I actually played a Detention Sphere to try for the two-for-one (though was foiled by the opponent's Abrupt Decay).

From a pure card advantage perspective, we would be spending a Supreme Verdict and a Sylvan Caryatid for the opponent's Sylvan Caryatid, two Fleecemane Lions, and his Eidolon of Countless Battles...or two-for-four. That is mathematically a good trade, and we will furthermore leave the opponent with only two cards in hand. The most dangerous card he can play is Obzedat, Ghost Council, but with his current mana situation, he can't actually muster the second white mana. Even if he rips a Plains, he won't be able to cast it next turn (no second black in that case). Killing the opponent's Sylvan Caryatid actually wipes some options off of his side of the table, which is great for us.

In a purely abstract sense, if I were in this spot and I could trade Supreme Verdict just for one Fleecemane Lion, I would consider it. He is in a mana situation where he can make Fleecemane Lion both hexproof and indestructible, and Frank's deck isn't particularly good at handling Monstrous Fleecemane Lions. We can counter with our Advent of the Wurm, but though a 5/5 is bigger than a 3/3 or a 4/4, an Advent of the Wurm token is anything but durable. It is vulnerable to Abrupt Decay (which we know he plays)...plus we can make a strong inference to Banishing Light and other point removal options.

Despite the general desire to kill a Fleecemane Lion, the question is whether we can skip the turn to do something greedier. We still have 20 life, so we aren't under immediate pressure. One of the plays I was considering was to let him attack, and deploy Advent of the Wurm mid-combat. That would be awesome, right? We could mug one of the Fleecemane Lions, and...

And he would probably just activate it to make it monstrous. :(

I mean if he made a mistake we could mug one; but in most situations he is just going to attack and have his mana up to react to our reactive spell.

So the other option is to just do nothing in terms of spells, let him hit us for ten or so, and then play a small two-card Sphinx's Revelation to see what to do next. I must say I didn't hate this option.

The problem with either of them is that his mana is tapped now, and in either of these "wait and see" scenarios, he is going to have the time to Monstrous at least one Fleecemane Lion, somewhat nullifying our Supreme Verdict.

That kind of makes our decision for us. Of the three possible spells to cast, I think the order is this:

● Advent of the Wurm - Worst. Most likely scenario is that we still have to play Supreme Verdict. He gets us for six or so, we lose our 5/5, and he keeps a problem threat that, if we go the Advent line, we will not have the cards to counter.● Sphinx's Revelation - We take ten but draw some before making our next play. This isn't bad; and because we have two copies of Sphinx's Revelation, we aren't risking much in terms of unique cards. This is potentially bad because he will have time to monstrous up at least one Fleecemane Lion, but we would be left with an Advent of the Wurm to potentially hold it off, making this play far better than the straight Advent of the Wurm line. The bigger issue is that our land this turn enters the battlefield tapped, so we can't be very greedy with our Sphinx's Revelation.● Supreme Verdict - This, then, is the best of the three spell lines. We have an opportunity to kill two deadly Fleecemane Lions, stick at 20, and avoid any monstrous activations that would leave the opponent with a threat for which we have no long-term answers.

The rest of the turn is fairly cosmetic.

I guess it is technically correct to play the Temple of Plenty prior to the Supreme Verdict, but there is only one spell that would realistically cause us to shift our line ( Detention Sphere)...and the presence of that card would probably just make us play worse. Is it worth taking circa ten damage to try for the Detention Sphere line? We actually want more lands so we can go for bigger Sphinx's Revelations two and three turns down the line.

As for how we tap, the main thing I was soliciting is that readers tap the Sylvan Caryatid as part of the mix. It's the difference between having a land untapped and not.

We can't actually play anything with one mana open (we are left with a four mana spell and two X-spells), but you want to get used to forming the right habits, not just making the right plays in isolation. Every time you tap correctly you make it more likely you will tap correctly the next time, and a mote of mindfulness now can therefore contribute to better autopilot play in the future.

Mike's Play:Play Temple of Plenty (though its scry is unlikely to affect our next move). Tap Sylvan Caryatid, Forest, Island, and Temple Garden for Supreme Verdict.

For agreeing with Yours Truly, reader and responder Matthew Kean gets a $25 TCGplayer.com gift certificate!

And for correctly guessing this week's Celebrity Guest Lauphiette Kincey gets the most special, and especially disruptive first-time third $25 TCGPlayer.com gift certificate!

Make sure you send a message to our Facebook page - MTGatTCGplayer - to claim your prize! Thanks for playing, and once again huge congrats to our editor for earning the successful spot one week ago that inspired all of this.

Frank is the Editor and Community Manager of TCGplayer.com. He also co-created and hosted the Magic podcast, Untapped, was a member of the Wizards Event Coverage Team, and is a semi-active streamer. You can follow him on Twitter at @FrankLepore.