This week we tapped an engaging new deck and re-engaged the mind of the amazing player behind it.

The weapon of choice? UW Heroic!

Tom Ross tore through the swiss rounds of the recent Columbus Open with his UW Heroic deck, ultimately finishing in the Top 4. This is a deck with a crazy structure, almost hearkening back to the 20/20/20 of Tsuyoshi Fujita circa PT Honolulu I. Tom's deck has 20 creatures, 17 buff spells, 22 lands, and one interactive card! This is a creature beatdown deck with essentially no reach, yet potentially dominating in the hands of an adept spellcaster.

For our hypothetical this week, we have Tom's deck in a game three situation against a Mardu Tokens deck. The spot in question looks a little something like this: 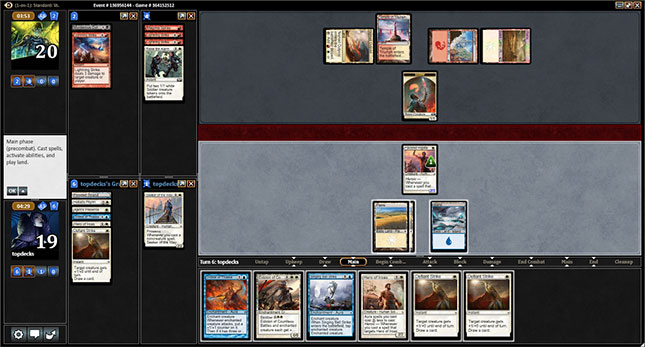 Though the game has progressed a bit -- largely our opponent successfully killing our little guys before they can put on a pair of "pants" -- neither side has made much impact on the other's life total. How do we change that narrative and approach the turn at hand?

What do you think Celebrity Guest Tom Ross?

"Play Hero of Iroas then Ordeal of Thassa on Favored Hoplite. Attack and draw two cards. Play whatever land you may draw. Basically get in while you have a window, the huge threat and extra two cards are more important than leaving up anything in particular.

Tom Ross's Play: Play Hero of Iroas and Ordeal of Thassa, attack (and then see what happens).BTW I super love how Tom incorporates what kind of cards he is looking towards and a bit of his near- and long-term strategy here as well as his mindset around the play at hand. We are the beatdown, playing a damage deck against a deck with powerful direct damage options (plus other removal access). We've got to get our damage in while we can! Pump, swing, leave a big and beautiful bruiser... Maybe leave some options around Crackling Doom.

Here's one for your toolbox that seems topical inspired by Tom's comments. I was playing Limited some years ago, with Grand Prix Champion Jon Sonne looking over my shoulder. I was playing a green creature deck against some kind of more controllish deck -- probably some approximation of Grixis, if memory serves. I attacked with my creatures and moved to pass through combat. The game wasn't for anything -- wasn't a sanctioned PTQ match or anything -- so Jon stopped me and suggested I hurl my whole hand onto my creatures. I had a bunch of Giant Growths, but I was planning to save them. For what? I'm not sure. Interaction with red removal? Probably not how you are going to win THIS game. Jon said that when you have buff spells, it is sometimes better to get rid of them -- and get paid off -- than hold them for some future strategic position that may never come up. Pump spells can be cute against red removal (and lazy, auto-pilot play), but when the opponent has black too you can find yourself in a spot where you never get to play your pump spells, so openings can be precious. Given Tom's answer, I thought this was a pretty good opportunity to introduce this manner of thinking, which might be less intuitive in general than it looks for the play at hand.

Anyway, for my part, I ultimately went with the same path as Tom, but my thinking around my turn -- specifically the play at hand -- was a little different.

Despite the opponent's 20-19 lead and additional land in play, I felt like I was ahead at this spot in the game. I had more card access (even though not one of those cards was a land), and the creature I had in play was better than the creature he had n play. Thanks to a first Ordeal of Thassa and some cantrips I was five cards deeper with a whopping four cards in hand edge. This kind of advantage isn't necessarily sustainable for a swarm-style creature deck against a controlling deck that can potentially answer with Anger of the Gods or End Hostilities, but in addition to a likely mini-Ancestral Recall this turn, my follow up creature (if I need it) is already waiting in hand.

When you're ahead you often want the world to keep going in the same direction with the least amount of unpredictable variation.

If we were in a more desperate situation (say our life total were substantially lower, maybe inside Lightning Strike range) or we had a tastier offensive path (say the opponent's life total were a lot lower, but we needed to stretch the probabilities a bit) it might be okay to go with a less overtly predictable path. In such a slightly different universe, there is a case to be made for playing Defiant Strike first.

We have a bit under a 50% chance to cantrip into a land if we play Defiant Strike. Starting with Defiant Strike is potentially seductive because, if we hit Plains, Mana Confluence, or Flooded Strand we can take what amounts to a more powerful version of the turn Tom proposed. The problem is that even if we hit the land (which is a solid chance, albeit less than 50%) there is no guarantee we can actually continue the play [that Tom proposed]. All our copies of Temple of Enlightenment and both our copies of Tranquil Grove are still in our deck.

You know what feels worse than stretching for a speculative plan that starts with having to cantrip into land in order to pull off your plus-play?

Hitting the land but hitting the wrong land, locking yourself out of the (very good) basic play.

If we miss on land (or hit one of the lands that enters the battlefield tapped) we run the risk of just wasting mana or being forced to blow our one interactive spell on a 1/1 token.

Alternately we can pull off Tom's play with 100% certainty this turn.

What happens after the attack we don't necessarily know. We don't know how much damage we will get in for this turn, or whether the opponent will have a body on the battlefield next.

But we do know that whatever happens will involve a further buffed Favored Hoplite (i.e. a threat way out of red removal range), plus drawing two extra cards when we are already ahead.

So, bringing it back around, we grow one of our threats and pull further ahead in terms of card advantage. The tight, predictable, play is better for us than a speculative one here, in my opinion.

Mike's Play: Play Hero of Iroas and Ordeal of Thassa, attack (and then see what happens).Tom and I agreed on the play at hand for this turn.

Many of you did as well!

(But we can only reward two of you.)

For my part, I will be spending the weekend guiding 2/2 Goblins through The Red Zone; wish me luck at Grand Prix New Jersey this weekend!

I won a Grand Prix Trial so am pretty pumped to swing for the fences with a couple of byes under my belt.

Tom and I chuckled that last time I asked him to contribute to a Make the Play Monday / Flores Rewards Friday and met up at an event with him (Star City Invitational last August) he went on to win the event weekend. I'd say wish "The Boss" luck too...but he probably won't need it.

Thanks for reading everybody.