This week we looked at three different scenarios from a match between a new Monoblack Aggro deck and a Jeskai Control opponent.

Our deck is a ton of one-drops, heavy on the offense, with a little removal to push through damage and trade up against superior threats: 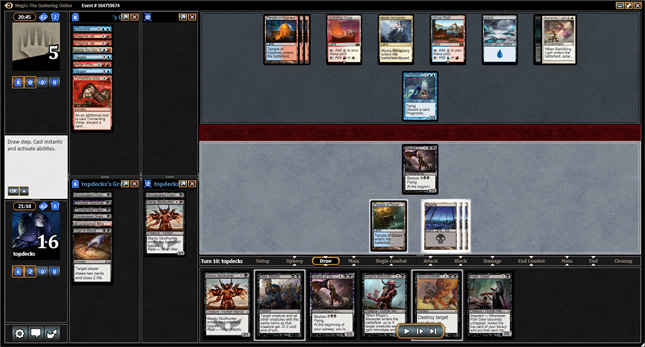 In our first situation the Monoblack heroes are coming out of a mana stuck early game, riding the offense afforded by a ton of 2/1 creatures for B...but are bumping up against the mighty Prognostic Sphinx. With our resources relatively tight but the opponent threatening to stabilize on five life, what is the best route to close this game out?

"The first choice here is do we try to kill the opponent with Mogis's Marauder or not.

"It is hard to say for sure without actually playing through every turn ourselves, as it's hard to have a feel for what he could be holding without that info.

"My default reaction would be to take a more conservative line as we have enough threats in hand that the Marauder will be lethal again soon no matter what, while our removal will become much worse over time.

"My goal this turn is to deal three damage and present two lethal threats. There is only one way to do this - Bile Blight the Sphinx pre-combat, attack with my Herald and then return a Champion.

"If my opponent has a Counterspell for my Bile Blight, I'll settle for plan B and cast a Pain Seer. If he either taps the Sphinx or lets it go to 0/2, I send in the Herald and raid back my Champion.

"If he has a Lightning Strike, that is the worst case scenario. We won't get to raid and we'll have wasted our turn downgrading our force. It still isn't that bad as if we just play Pain Seer post-combat and then repeat this plan next turn. If we ever draw a fifth land, we can Downfall and raid a Champion on the same turn and the game will be easy.

"Now that Sphinx's Revelation is gone, giving a UW Control deck a few extra turns is much less terrifying. They can't gain large amounts of life out of nowhere so you will eventually grind them down."

Tom Martell's Play: Bile Blight pre-combat.I think Tom's analysis is spot-on in this case and agree with pretty much everything he said.

If this were a situation where we had five mana instead of four mana this turn would be a softball. We could play Mogis's Marauder and see if he had a Counterspell. If not, we could probably just win on the spot by making both of our creatures unblockable and crushing for his full life total. If yes...well that would be the difference between having four and five mana.

In our current spot, if we lead with Mogis's Marauder and he has a Counterspell we give up the turn. If we attack with our 3/3 Herald of Torment he is just going to eat it cleanly with his much larger Prognostic Sphinx. At 16 life we're nowhere near dead; we're not in a rush to take this game down immediately, and can try something else.

I like the Bile Blight lead-off because it only costs two mana. If it is successful, we can get in for three and grab a freebie 2/1 from our graveyard. If it's not, we can at least play our Pain Seer. With five power in play we can try the hell out of Mogis's Marauder next turn.

Hero's Downfall is just a worse Mogis's Marauder this turn. If you are going to commit three mana, you might as well be able to win the game. 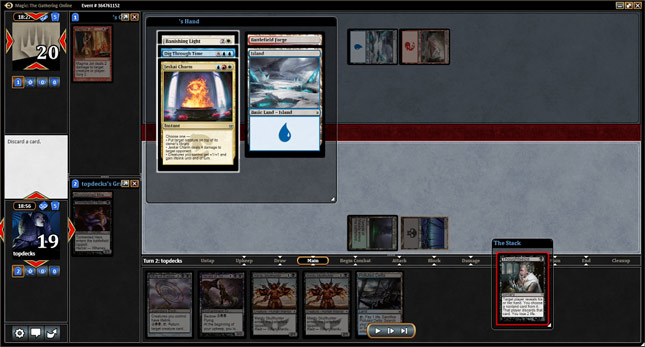 "We've decided to play Thoughtseize and a temple over playing a Skullhunter, which will slow down our creatures and means we cannot trigger raid on our second Skullhunter next turn. I would rather start applying pressure and turning on raid, so I would have played Skullhunter here, but that ship has sailed.

"Our plan next turn is to play our Herald and try to trigger raid on our two Skullhunters thereafter. Taking Banishing Light is the obvious choice. It means he doesn't have a hard removal spell for the Herald and our late game trump of Whip will be hard to answer.

"The one downside to this plan is it will take a while to actually put it into effect. Our Herald will get Charmed, buying the opponent another turn. This will likely let them cast Dig Through Time, which should find a hard removal spell to kill our Herald. This will put us back to square zero on our raid trigger plan. Our Whip better do a lot of work as we are going to be at board parity against an opponent who has already resolved a Dig.

"Instead we could just take Dig now and let him one-for-one some of our guys. We won't gain the card advantage we are hoping for off of our Skullhunters, but as long as we make him use his Banishing Light on a creature, we can rely on Whip to win us the long game. This preserves our trump and lets us maximize the advantage from our Skullhunters.

"The third option is to take the Charm. Next turn our opponent will play a land and we will cast Herald, They will have to Banishing Light it main phase, and we can play Whip, Skullhunter or whatever we draw. The opponent only has two cards in the graveyard in this scenario, so they still can't dig and we have time to further disrupt their hand and get ahead on board.

"This third option disrupts their removal sequencing and throws a wrench in their Dig plan; I would take Charm here."

The opponent hit our first creature with a Magma Jet before we could get an attack in, so it seems like whatever creature we play, he will main phase his removal in order to prevent us from being able to set up Raid. If we leave him with Banishing Light he will essentially be locked into such a main phase move, but if we leave him with Jeskai Charm he'll still probably put a pre-combat restriction on himself (though likely we'll take a Herald of Torment ping first).

From my perspective if I can get him to tap his mana so I can resolve Whip of Erebos I'm just going to win in the long term. But if Whip of Erebos is my plan...I really don't want him to have the one card that can handle it; and that means taking Banishing Light.

To be completely honest I never even considered taking Dig Through Time. It's super early in the game and he is nowhere near being able to cast it this second. I'm pretty okay with a slow setup here because I feel like any time we get our attacks on, we are ultimately going to be able to counter Dig Through Time card advantage with a little help from Raid.

"This is an interesting decision. To start with, let's first note that we are in really bad shape. We are going to seven from our Thoughtseize and our opponent can end of turn Magma Jet us, putting us to five with a scry two to find a lethal burn spell (triggering Keranos). We are in bad shape.

"There is a lot of math we could do here to calculate the odds of him finding a burn spell with a scry two + blind reveal. I'm going to just give my gut reaction and say I think we have to take Magma Jet here. He's a big favorite to kill us if he can Magma Jet us end of turn down to five and then reveal to his God.

"If we take the Jet, we are in no danger of immediately dying. We can play Erebos and a one-drop, and now he can either Anger away our one-drop or he can play his 4/4 to race us. We'll get to hit him with Erebos either way, going to either nine or 12, depending on his Keranos. Once we start gaining 5+ life a turn, we will pull out of danger very quickly.

What I was thinking at the time is to play Erebos, God of the Dead, get that online as an essentially unstoppable attacker, and ride Whip of Erebos to a comfortable life total well out of the range of Keranos and individual burn spells.

Erebos, God of the Dead counters the ability of Resolute Archangel to gain life so that is essentially a non-factor as we can 100% resolve Erebos no matter what we take with Thoughtseize here.

That said, I might have been overly restrictive with my planning. I wanted to use my remaining black mana to get an additional pip with Bloodsoaked Champion, and then set up an attack the next turn borrowing that pip. It's ultimately irrelevant because we can get more black pips with Mardu Skullhunter even if we don't get the Raid 187.

I chatted with Tom a bit about this play after he submitted his answers and I ultimately think he is right on the Magma Jet play. I will admit I probably underrated the possibility of simply dying here. I don't think we are a favorite to actually lose on the spot, but the prospect of losing is so definitive it really seems like something we should respect and consider.

I took the Anger of the Gods because I was specifically focused on not getting my Bloodsoaked Champions permanently removed, but respecting the ability to keep playing the game should probably have been higher on my agenda. In actuality, his Magma Jet didn't set up a lethal Keranos + burn spell the next turn...but that's not necessarily a definitive endorsement on the universe's part.

Mike's Play: Thoughtseize Anger of the Gods.In the case of Scenario Two I don't know that I am convinced that taking the instant is so much better than taking the Banishing Light; but in this case, I think Tom has me convinced.

Thanks everyone for reading.

Tom Martell is a Pro Tour and Grand Prix Champion of almost unassailable Pro Tour match win expectation (especially in Constructed). If you want to get better at Magic, follow Tom on Twitter at @tommartell and check out his stream at http://twitch.tv/tommartell