Is there a Giant Growth in the format? he asks. Would they play it?

How about removal? he ponders. What are the chances they play Ulcerate main deck?

Is there ANY POSSIBLE instant that they can play in the format for B or G that will disrupt our move?

This week's Celebrity Guest asked these questions, and variations of them, over and over before committing to his answer. The available plays are relatively straightforward, but before deciding on one of them he seemed extraordinarily fixated on that one untapped mana and the possibilities it presented.

In case you missed it (or just forgot), this is the game state in question from Make the Play Monday - Two-for-One: 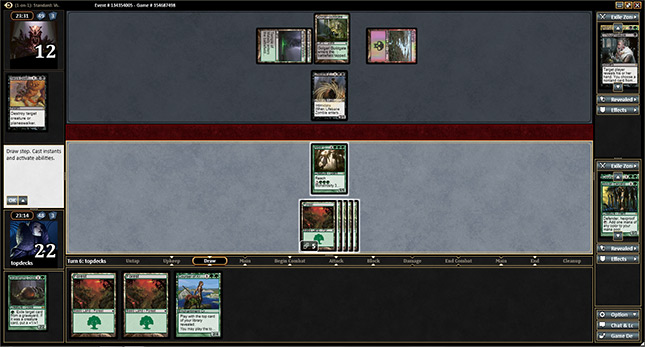 This time, we are a straight green Two-for-One brew, like so:

And a brew it is. Not really the same as any deck anyone is playing in Standard right now; pregnant with post-rotation possibility; an extra value meal of one-upsmanship… Or rather, twenty or so small one-ups all played together.

We are in the draw step of our sixth turn.

We have five Forests on the battlefield, along with an Arbor Colossus.

Our three-card hand includes a pair of Forests and a freshly drawn Courser of Kruphix.

The opponent has got a creature, too: the deadly Lifebane Zombie.

To go along with that he has four lands on the battlefield, but only one of them is untapped (for our Celebrity Guest to focus on); if there is any luck to this situation it is that we just drew the Courser of Kruphix so the opponent whiffed with the Lifebane Zombie's special ability last turn.

We're ahead 22-12, but have got a decision in front of us. We're leading on life points, but not that far ahead in general. We've got one more land than the opponent, but considering we're a little flooded whereas he missed a land drop…dollars to doughnuts his three-card hand is better than our three-card hand. An Arbor Colossus for sure is bigger than a Lifebane Zombie, but that essentially unblockable 3/1 ain't no slouch. A telling difference between our decks is that he can Remove our threat no matter how big it is; and we can't Remove his, no matter how one its toughness…at least outside of a Red Zone fist fight.

How do we play this sixth turn?

I know this scenario looks kind of straightforward; yet I did whatever the opposite of bringing a knife to a gun fight is with the week's choice of Celebrity Guest:

"I feel like your choices are all pretty close.

"I'd attack, then play the Courser of Kruphix; then play a land from on top of my library if one is there, otherwise play land from my hand.

"The other argument is to play a land, attack with the Arbor Colossus, and probably monstrous.

"This doesn't do anything!

"Monstrous or not, it still takes two hits from the Arbor Colossus to finish him off; and a monstrous hit doesn't even make our Courser of Kruphix lethal.

"I'd rather just get the Courser in play than leave it in my hand, due to discard.

"But all your plays are pretty close; and I'm not going to monstrous"

There are two big lines of special ability play here; one of them is about potentially getting in extra damage, and the other is about [potentially] nabbing some card advantage. Neither one of them is a decisive kill, but the timing of the cards makes them somewhat incompatible.

Since the opponent knows your hand from last turn, any point you play the Courser of Kruphix, the jig is kind of up.

You can play Courser pre-combat, in which case the opponent knows you aren't going to do anything (you don't have the mana for Monstrous and he knows you're gripping Forests only, meaning that the opponent is guaranteed all the information he needs to make the optimal play from his position); or you can play it post-combat. In the case you play it post-combat you very likely aren't going to play your Forest first (otherwise what's the point of this line?). With only five Forests in play, the opponent still knows you aren't going to get big (because otherwise you would have played your Forest pre-combat; he knows you have a Forest; so clearly you are saving up for something).

…but it's like Jon said: Whether you go monstrous or not, this turn isn't particularly game breaking. A regular-sized Arbor Colossus is the biggest animal on the battlefield already, and going extra big doesn't actually change your offense math in terms of number of turns it takes to win the game.

The things that I would focus on are to push the lead we have, but also to get the Courser out. It is quite possible the opponent has removal because he has one fewer land in play than we have. What we don't want to do is send our Colossus, pull our pants down to get in a little extra damage, but play into that potential removal, giving the opponent a de facto Time Walk (or dos).

Despite getting in for monstrous, "bad" can be pretty bad for us: Look at a very real scenario here… We attack, get big, but have all our mana tapped (meaning no Courser follow up). He kills the Arbor Colossus and swings back, destroys our Colossus, and we don't have a counterattack because the Courser is still in our hand. He has another Lifebane Zombie or Thoughtseize, while we have another land on top. WHILE WE HAVE ANOTHER LAND ON TOP! If memory serves (from actually playing the game) we had another land on top. In this spot we are in a pretty frustrating pickle, ceding not one but two turns with no further action, but getting clocked back. And like Jon said, even if we get in for the full monstrous, our Centaur isn't even lethal.

Having a land on top is quite bad given our fairly flooded position; we would like to clear it, the possibility of it, I think. The difference between pushing the slight lead we have and being Drowned by a combination of no action and a land on top is enormous given the relatively close universe of plays in front of us. It is also worth noting that if the opponent takes our normal-sized Colossus hit and has to respect the Colossus next turn that our Centaur actually manhandles his Lifebane Zombie in combat (2/4 walks away from a tussle with 3/1), which is an additional avenue for card advantage. Plus, if he has Desecration Demon…well, that's really the main reason anyone games with Arbor Colossus at all.

Because there are incentives to both attacking with monstrous in mind (whether or not you choose to act on it) and getting the Courser of Kruphix out, it is worth mentioning that there is another less intuitive line of playing your sixth land pre-combat (still threatening monstrous), not actually firing it off, so you can then play Courser of Kruphix post-combat. The key disadvantage of this play is that you don't get a free land drop if you reveal a land on the top of your library, meaning you commit the resources of line #1 without actually hitting extra hard, and lose out on the potential card advantage / top card curation of line #2, ultimately maximizing neither potentially advantageous creature ability. Yet! I think this play is weirdly better than actually activating monstrous this turn outright, considering how badly behind you would be if he had removal and you had land on top.

None of the plays are perfect, but I went with the intuitive line #2 (same play as Jon), because the ROI on monstrous this turn is out of line with what we would have to give up, combined with a visceral terror at the possibility of being stuck with land on top (when I could have done something about it).

For agreeing with Jon Finkel, the Man, the Machine, the not-quite-Psychatog-at-the-same-casting-cost (in the same set), Andy Wallace scores $25 in fabulous TCGplayer.com inventory. A $25 gift certificate is yours, Andy Wallace!