Two things on a personal note before we begin this episode of Flores Rewards Friday proper:

I've flirted recently with the thought of switching to Abzan for serious Standard myself. After all, my closest collaborator in deck building "has played Utter End in every Standard tournament in which it was legal" (probably not 100% true but close enough for horseshoes and hand grenades) and I see things like my longtime Number One Apprentice crushing it with progressive card advantage and high quality midrange threats and I can't help but imagine myself chaining a Courser of Kruphix into a Siege Rhino...

...until I remember that I was completely incapable of posting a winning record at LGS level with Abzan a few short months ago, prior to winning my PPTQ with Dimir Control.

Separately, I have written a couple of times that the prospect of working with the Celebrity Guests on Make the Play Monday and Flores Rewards Friday has been helpful to my own game; this episode reinforces that to an almost shocking degree.

Me and Abzan just don't agree, which you'll soon see.

As a reminder, our Weapon of Choice for this week's hypotheticals:

And not surprisingly our Celebrity Guest is the Abzan pilot in question, Ser Ravitz, Joshua P.

On the subject of sixty-one card decks (and that this successful Abzan implementation was based off of a sixty-one card Grand Prix Shanghai-winning deck) Josh had this to say:

"Indeed I have found it unacceptable to play decks with more than the minimum amount of cards in them. If you can identify a best card in your deck be it Ancestral Recall; Jace, the Mind Sculptor; or just the lowly Siege Rhino, you should play as few cards as possible in the hopes that you will draw your best card more often.

"The fact that [Ichikawa] won GP Shanghai anyway is a testament to the deck. Indeed, going forward I would Remove a Raptor or put it in the board and play the second Tasigur but we're really splitting hairs here as you have to board out the Raptors frequently enough anyway."

But what about our scenarios specific?

"This deck mulligans well, and it's mostly cards that replace themselves or better, as Mike pointed out. A six card hand has more than six cards worth of value in it a good deal of the time, so do not be afraid to mulligan a suspect hand, which this definitely is. Not enough lands? Check. Barely the right colors? Check. Cards that cost more than four mana? Check. I don't think it takes any degree of expertise to decide to mulligan this hand, but it's good to get into the habit of critically evaluating your opening hand.

"If you see this same hand with a Temple of Silence instead of a Plains, it becomes a lot more tempting to keep. Same for Temple of Malady instead of Llanowar Wastes. If the hand was presented to me with Satyr Wayfinder instead of any of the non-land, non-Coursers, I'd keep."

Here's my rationale: We are over 2/3 to draw "a land" before we're going to miss, and almost 3/4 to draw "a" land or a Satyr Wayfinder given the same conditions.

So on the baseline criteria of "will we have to discard due to missing a land drop and having too many cards in hand" in the nearest term, the answer is probably not.

I considered for a moment that the land I plucked might be a Plains or Urborg, Tomb of Yawgmoth, but then convinced myself that I could at least play my Deathmist Raptor face down.

The sequencing gets weird depending not only on if we draw a non-green producing land, or if we do something really gross like pulling Sandsteppe Citadel on turn three (can technically make the land drop but can't actually do anything with it). Obviously the lottery win is getting three land on turn three, the net of which makes green, to play Deathmist Raptor as the bait (presumably) and then follow up with Courser of Kruphix to really start netting cards.

If we naturally draw four by four we might switch into Siege Rhino mode as a crime of opportunity.

Overall I don't know that the keep here is egregiously poor, but can see that with a five and a six (both of which are cards of conditional value) we might be asking for trouble. I'll defer to the expert opinion, but nevertheless... 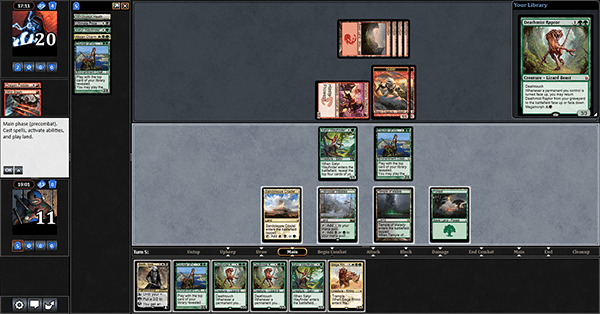 It's turn five; what should we do?

This is the classic greed v. tight scenario.

On one hand we can make the tight play of Siege Rhino -- a card the opponent might well not be able to deal with at all (and if so, at pretty substantial cost) -- or we can roll the dice with Satyr Wayfinder.

I suppose there are other plays, like Sorin + Vampire 2/2 (or even Sorin + lifelink); or anything leading off with a three-drop. But any of Deathmist Raptor / Deathmist Raptor / Courser of Kruphix all seem atrocious to me relative to either Siege Rhino or Satyr Wayfinder; just inefficient.

The Satyr Wayfinder play has basically four looks at an untapped land. Normally Satyr Wayfinder gives you four looks, but in this case it is only three looks because we know that our top card is a Deathmist Raptor; however we can play a land off the top of our deck thanks to Courser of Kruphix, so that gives us the fourth look at an untapped land.

A land that enters the battlefield tapped isn't worthless to us or anything, but it isn't playing for the maximum value. We want to use two of our mana for Satyr Wayfinder and the other three (one being new) to gain a life + play a Deathmist Raptor or Courser of Kruphix.

The Satyr Wayfinder line has the added bonus of flipping a Deathmist Raptor into the graveyard for future free-buy; and we conveniently have two more morph creatures in grip already.

We're going to hit an untapped land a solid amount of the time but we are not an overwhelming favorite.

I think that matters more in games where Siege Rhino would be a slam-dunk play versus this case, where we are favored to hit but even if we don't we aren't that bad off; like if we hit a tapped land we still get some life, and if we miss entirely we still have a 1/1 which can pair off against an opposing 1/1...which overall gives us a not-unreasonable battlefield and more than half of our life (but probably not the best blocking situation given the known quantity of Goblin Heelcutter).

Hitting two bodies and the land here will give us 12 life and an excellent defensive position though, especially given the ability to follow up with a Sorin + alpha strike (depending on our creature situation) or just life + the Siege Rhino (i.e. even more life).

"In this scenario I would choose to make the obvious play of Siege Rhino and no attack. It's tempting to play the Wayfinder and clear the top of the deck because we really don't need or want another Deathmist Raptor right now, and it seems like if we did hit our untapped land drop we'd be able to play another creature onto the board as well which is ideal. Given that it isn't guaranteed, though, I'd wait another turn to consider a Risky Move like that and just play safe with a defensive Rhino.

"Ideally we want to advance our board to the point where we can play Sorin and plus him and gain around 10 life essentially locking the game up for ourselves, but with a hand full of good spells it's also important not to die so as to get an opportunity to play the spells."

I think what makes Josh's play compelling on reflection is that the Siege Rhino puts us nicely ahead, whether or not we are "missing a land drop" (and consequential life gain) here; as long as we are not splattered or somehow a mile behind we can follow up with a really compelling turn with Sorin.

Or, no interest in the risk given that his line is pretty cleanly ahead. 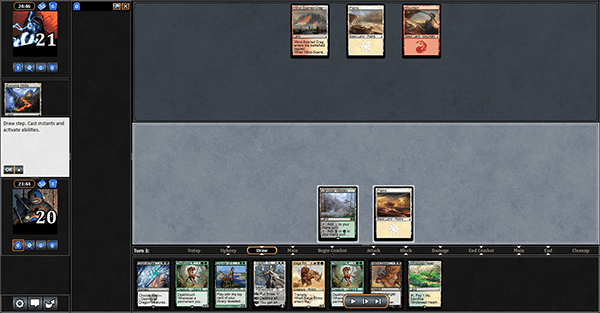 "My play is crack Windswept Heath for a forest and play Deathmist Raptor face down. My choices all involved cracking for a Forest and then I had to choose between playing a Deathmist Raptor up or down, and the Courser. I didn't want to play the Courser here because I wanted to have a chance to get a card from it, especially in the world where I actually miss my fourth land drop naturally (by drawing a non-land.) Playing it and it getting killed by something like a Valorous Stance for example would be disastrous if no more lands were immediately forthcoming.

"If we play Deathmist Raptor face up our opponent likely won't use his spell on it, but if we play it face down he might think it's a Den Protector which he definitely wants to kill before we can get value out of it. Since our plan is probably to play the other Raptor in a turn or so anyway, and then maybe unmorph it, having the first one already dead is great for us. If the morph lives, that's okay too."

Making a humbling trifecta for the day, I once again disagreed with the Celebrity Guest, making it three-for-three or zero-for-three depending on how you want to count it.

My thinking on Deathmist Raptor over Courser of Kruphix mirrors Josh's: no reason to get Courser of Kruphix killed before we can try to net a land (especially when we have no fourth land in site and are thinning a land out of our deck).

I didn't put a huge amount of thought into face up or face down but that face up rumbles better. Against a red deck the one life point from Llanowar Wastes might actually be relevant, but like I said, I didn't consider it when making my decision.

I thought that all of these scenarios were at least close; but given Josh's track record -- especially at the Invitational -- versus mine with Abzan, I am more than willing to concede all points.

So what does that mean?

To begin with we will be granting $25 TCGplayer gift certificates to Brad Trittin and Matt Wells.

As I have never been so shaky on my own plays as this week, I thought I'd just give another $25 to Enrico Avallone (again for agreeing with Josh).

I didn't want to not grant "my own" side of the prizes, but given the o-fer batting average this week, I didn't want to leave off on any prizes situation that looked like our responses were somehow in equilibrium.

The last Flores Rewards Friday (for a while).

You will see this feature again, maybe not too far into the future, but we really want to make it feel special, and even if it has been useful to readers and writers both, it hasn't felt special for a while.

So I'm going to take next week off, but be back in two...

You'll really want to watch this space for it!