On Make the Play Monday this week we looked at a couple of scenarios from the front-half of my double PPTQ weekend with B/U Control.

To review, this was our Weapon of Choice:

Let's review our scenarios:Scenario One

Our opponent has led with Seeker of the Way, using Flooded Strand into Island, gaining white mana via Battlefield Forge. 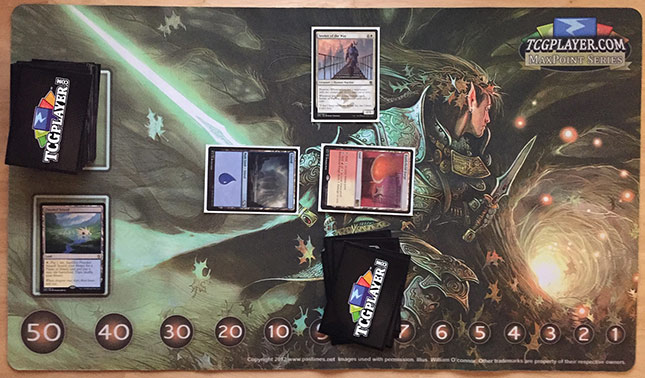 From our perspective, we started on an Opulent Palace and laid Polluted Delta.

On our third turn that left us with an available hand of... 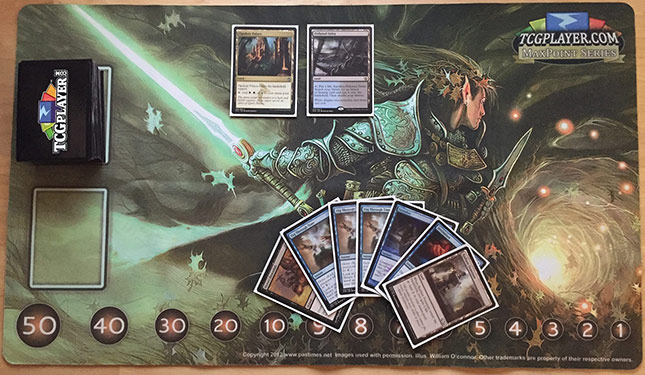 The scenarios asked us to 1) play our third turn, and 2) ponder what's the worst that could happen?

For this one, I brought back Flores Rewards Friday's very first Celebrity Guest -- and one of the finest control players on the planet -- Alexander Hayne to weigh in this week.

"A) Play Radiant Fountain (that part is easy) We really only have two viable options here, either we crack the Polluted Delta for a land and cast Divination, or we hold up our mana being able to cast either Dissolve or Hero's Downfall depending on what our opponent does. I much prefer holding up the interactive cards, as we don't actually gain anything from casting Divination this turn rather than the next.

"If our opponent just attacks, I would take the damage and use the Downfall on his/her creature at end of turn, and I would Dissolve basically any three-drop that the opponent can play.

"The plan, something you should always have, is being able to interact this turn, then play Divination next turn to hit lands, with our opponent having the least impactful board state possible.

"B) The worst case is that our opponent plays something that we want to counter (say, a Mantis Rider or a Goblin Rabblemaster), and then on our turn we miss on hitting a land for our three draws (from Divination and the turn). Then our opponent adds another threat to the board on their turn, making us likely fall too far behind on tempo to be able to catch up."

Alexander Hayne's Play: Play Radiant Fountain, then wait and see.I thought this one was a bit of a head scratcher when it appeared in front of me.

Like Alex said, part of this one is easy -- play the Radiant Fountain.

I mean obviously play the Radiant Fountain. We don't have any other lands (and we want to make our land drop).

There are multiple ways to hit our land drops (at least our next land drop) though. The fastest, most obvious route is to play Divination and draw a couple of cards; where at least one is ideally a land. We tap out, drop our shields, take the worst the opponent can dish out, and hopefully meet whatever that is with four lands in play next turn.

But if we go this route we have to make a decision now...and that decision is what to get with our Polluted Delta. We can go with either Swamp or Island, which itself is a limiting and potentially focusing decision.

There is another way to hit our next land, though.

If we play wait-and-see, we can ideally Dissolve the opponent's next play and Scry into lands. We have substantially less chance of hitting our next land this way, though. We'll only see the top card instead of drawing twice so many (and then drawing another one the next turn), so either-or versus a full three.

The worst thing that could happen changes depending on which route we take.

If we tap out to play Divination we can end up absolutely destroyed, potentially. If I were to make that play I would do so by getting Swamp. There are two reasons for this; one is that this deck has one more Island than Swamp, so I could more likely naturally draw an Island than Swamp (though this is mitigated, somewhat, by the presence of Urborg, Tomb of Yawgmoth); the second is that there is already a threat on the battlefield that I am eventually going to have to deal with no matter what, and, at least at this point, any future, Dissolve-able, threats fall into the might have to deal with category.

What can happen while we're tapped out? Man there are some awful things. I think most people will go with the obvious ones. Mantis Rider isn't good (we only have one removal card right now, and Mantis Rider on its face is more dangerous than the Seeker of the Way we already have to deal with), nor is Goblin Rabblemaster (way scarier, for multiple reasons). But are those really the worst thing? We can at least deal with those directly.

If the opponent plays Jeskai Ascendancy while we're tapped out? I don't see us very likely coming back from this spot.

Like Alex said, we can always wait and see for now with the outlook of Dissolving "anything" this turn... And playing Hero's Downfall on the Seeker of the Way if nothing worth countering presents itself. This line gives us essentially the same play as the "tap out for Divination now, only just next turn, and with two or so fewer life (depending).

The near term "worst that could happen" is that the opponent doesn't play anything to Dissolve; this isn't even very bad, as we just play Hero's Downfall instead and the opponent does nothing to advance his position (which is actually awesome for us)...though it does limit our ability to proceed forward with the maximum smoothness. Because what we really want to do is Dissolve into black mana so that we can take turn four without having to play Divination, but with Hero's Downfall mana up.

The longer term "worst that could happen" with the "wait and see" line is that we really don't have any lands on top, Divination or no. But if we lose on account of not having any lands, there isn't much we can do about that.

It seems pretty clear to me, given the ability to mitigate the worst thing that can happen to us (and it's not like we're in good shape if we tap out and let the opponent "only" get us with Mantis Rider or Goblin Rabblemaster) while still being able to use three mana before our next turn that just playing the Radiant Fountain and passing gives us better results long term, at least given the information we have right now.

Once again we have started on Opulent Palace. 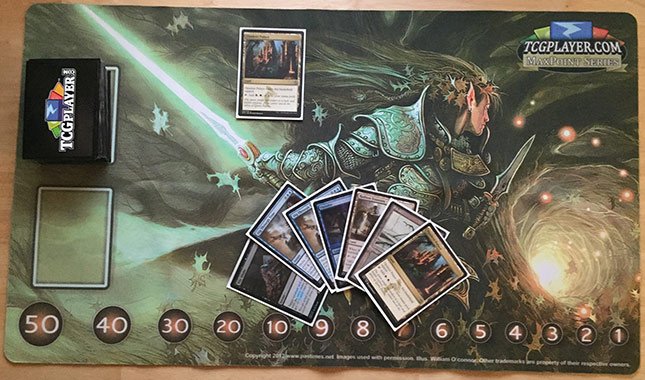 Our second turn hand is full of options though:

We are facing off against an opponent who has made what is probably the optimal play for his deck: a first turn Wooded Foothills into an Elvish Mystic: 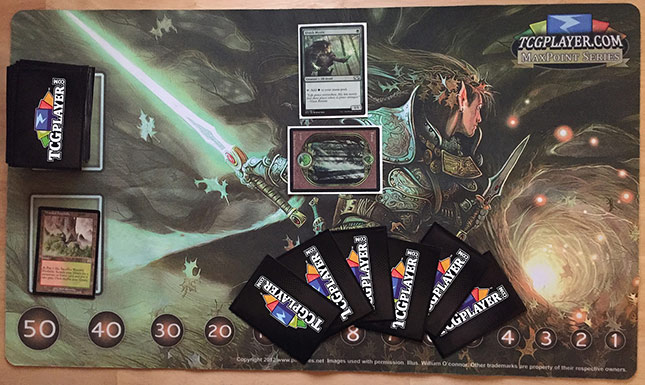 How do we play our second turn?

What's the worst that could happen?

"A) Our two options are to play the Swamp to cast Bile Blight or to play the Opulent Palace to guarantee Dissolve next turn. The decks our opponent could be playing are either some kind of green devotion strategy, or a RG -- perhaps splashing white -- aggressive strategy. Against the devotion decks, having access to Dissolve next turn is much more important than killing the Elvish Mystic or anything our opponent plays this turn.

"However, against a RG aggro deck, being able to stop or kill a Goblin Rabblemaster is pretty important. I would lean towards playing the Palace to enable casting Dissolve, because while Bile Blight will be useful later against the aggressive decks, Dissolve is only useful at one point in time and so I would prioritize being able to counter a powerful four-drop.

"B) The worst thing that could happen is that our opponent plays Goblin Rabblemaster on turn two, and then has something else scary on turn three like a Shaman of the Great Hunt, overtaxing our Bile Blight."

This obviously limited what "the worst that could happen" in my mind was. If the opponent is "only" a Green Devotion deck, he is unlikely to make a play worse than Courser of Kruphix. As good as Courser of Kruphix is as a Magic: The Gathering card, it only has two power and we can't deal with it now anyway.

If we assume the opponent is some kind of a Green Devotion, Opulent Palace is the obvious play. It is much more important to be able to Counterspell something like Polukranos, World Eater or Whisperwood Elemental. It's bad enough we're behind right now. If our Radiant Fountain were an Island, it would be fine to play Swamp here, but since our only source of blue comes into play tapped we have to take that into consideration given the potential powerhouse fatty boom booms that might be coming.

While it's mathematically more likely that the opponent is a Green Devotion deck (probably GR Devotion, which has of late become quite popular) than a beatdown or monsters deck (which are not popular), assuming the former case isn't exactly "right" here. A Goblin Rabblemaster is worse than a Courser of Kruphix, of course.

That said, I would still play the Opulent Palace.

If we don't play the Opulent Palace we probably won't be able to play Dissolve on one of the big threats (Polukranos or worse) that is going to be in either deck.

The Bile Blight in our hand isn't just playable now (one possible line, of course, being to just kill the Elvish Mystic) but a capable "catch up" card. It can get us out from under a Goblin Rabblemaster (even if the Rabblemaster had two or three 1/1 cronies hanging around still) next turn, or later.

Mike's Play: Opulent PalaceAlex and I agreed on optimal plays this week.

How did you all do?

And for agreeing with my plays (aka the same plays) of Radiant Fountain / wait and see + Opulent Palace, Chris Pichler earns a $25 TCGPlayer.com gift certificate as well. Enjoy Chris!

I asked "what's the worst that could happen" illustratively, and to get our collective gears turning. I was in particular enlightened by Alex's take that the second scenario might have been RG Monsters or thereabouts, rather than automatically Green Devotion. Here's to being caught off guard less often!

I'll be mixing it up a little bit next week, for reasons that some of you might already be speculating. See you then (and then back to Make the Play / Flores Rewards the week after).

Alexander Hayne is a multiple Grand Prix Champion, the winner of Pro Tour Avacyn Restored, and the 2011-2012 Magic Pro Tour Rookie of the Year. For more of his insights, follow Alex on Twitter at @insaynehayne