If you're reading this on Friday, Today is the first day of the StarCity Invitational in New Jersey.

For the Standard portion, I have been practicing for the last couple of weeks with two-time Celebrity Guest (and Pro Tour Top 8 competitor) Matt Sperling's RW Burn deck from the Top 8 of Pro Tour Magic 2015:

Unsurprisingly, the scenario from this week's Make the Play Monday was from a playtest game I had earlier this week, that I thought would be interesting and instructive. 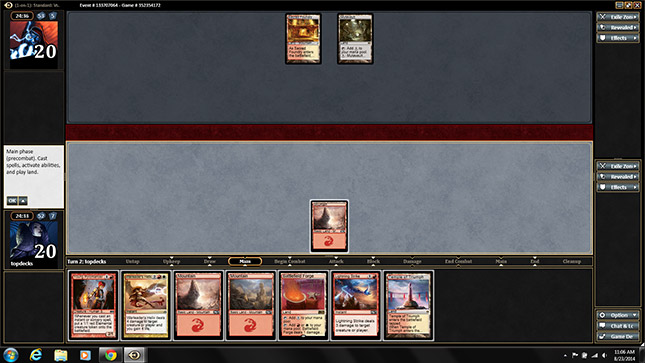 The opponent opened on Sacred Foundry into Mutavault.

We opened on Mountain.

Now you may have guessed that I would bring Matt back yet again to do another go 'round RE: his RW, but instead I decided to tap a different ridiculous Red Deck resource, Tom "The Boss" Ross.

[Make the Play] Monday this week was Tom's birthday and he is the reigning StarCity Invitational Champion. So I personally just wanted to get any of his good Red Deck play into my head going into the weekend. What says The Boss on this one?

"I'd go with Mountain, pass.

"Although I don't think there is much information to be hidden, as in masking the deck, as Rabble Red, Monored Devotion, or a Monored Burn variant, I think that not showing your specific colors and archetype is non-negligible and there is no cost to not doing so.

"I wouldn't play Young Pyromancer into open mana here. I'd like to wait until I can cast a spell to get a token out of him. Mutavault does potentially block the Elemental but with Lightning Strike and the other burn spells in your deck that's a non-issue.

"There's a reasonable chance that your opponent will attack with Mutavault next turn and we'll use Lightning Strike on it. There's also a chance he'll be concerned about Searing Blood by you passing and try to play around it all game. I like waiting on Temple of Triumph. There's nothing specific that you're looking for next turn and have plenty of lands without a pressing need to curve out where waiting to gain more information before scrying seems like the best line.

"The only way you get punished is if your opponent doesn't have a burn spell for a turn two Young Pyromancer then comes with Chandra's Phoenix. In that case you miss some damage and board development. I feel that chances that he has nothing in your end step along with the potency of getting a guaranteed 1/1 into play on turn four outweighs that chance.

"The burn matchups comes down to who has the last creature in play and not so much a race. A 1/1 is very capable of drawing out a removal spell or dealing four to five damage. Being on the draw means you have the advantage on cards and will likely end up with the last thing in play"

For my part, I agree with Tom's play here.

Per usual with these scenarios, there is a range of possible right here, essentially falling into three buckets:

Play an Untapped Land Only

Of the available buckets, I think Mountain, pass is the overall best play for us for largely the same reasons Tom did. We have Lightning Strike mana open in case the opponent swings with Mutavault or plays a threat of his own (e.g. his own Young Pyromancer). We can play Young Pyromancer, but it will probably die no matter when we play it. So we should play it when we can get an Elemental or so.

Play an Untapped Land Into a Young Pyromancer

Earlier this week my podcast partner Brian David-Marshall and I played a tune-up tournament at local store The Uncommons that I was lucky enough to win. I played turn two Young Pyromancer several times on the tournament. I just wouldn't do it against this battlefield.

Against Mountain, we have a low likelihood of untapping with Young Pyromancer on the battlefield, so we probably want to wait for a point where we can get some token value out of it. If the opponent draws out our Lightning Strike with Mutavault / Young Pyromancer / Chandra's Phoenix and we draw blank next turn I'd probably play Young Pyromancer on turn three; but not with this hand on turn two; not for no value.

I think Temple of Triumph is substantially worse than any of the preceding four plays. And maybe not for the reason you think.

Grand Prix Top 8 competitor and World Series of Poker bracelet winner (and BDM's Monkey Dog teammate) Eric Kesselman taught me a pretty basic principle of tight play: Make sure you can cast the tricks you actually have before worrying about how you represent tricks you don't have.

Can you imagine the opponent is manascrewed, shrugs, says "eff it" and swings with his Mutavault next turn? And we can't Shock it? And we could have protected ourselves? That's horrible! It's also bad if the opponent, say, draws Young Pyromancer and we have two different two mana spells but only three lands in play? We are essentially Time Walked.

We don't need to box ourselves in that way, though. We can defend ourselves with Lighting Strike and preserve mana for a trigger on Young Pyromancer with this hand. Preserving our options without burning additional resources, over and over, over time, is likely to maximize our chances of winning more games.

Mike's play: Mountain, pass.In real life, I made the Mountain, pass play. The opponent played a third land and a Young Pyromancer (I figured he had the same reasoning in line) and we Lightning Striked it. He Shocked us to make a 1/1 Elemental Token, i.e. moral victory.

I locked it up eventually, but got hit by a turn two Mutavault attack in game two, which is the worst (and, in part, what we were trying to avoid in this game). The opponent stumbled for four mana, allowing me to win. But I can't say I was happy at giving the opponent essentially a "free Shock."

I'm very glad to see that "Mountain, pass" was one of, if not the, most popular response this week. Pat yourselves on the collective back, guys! Great play all around!

But there can only be two winners-winners. This week those winners are:

My goal for today is to successfully remember all my Young Pyromancer, Satyr Firedancer, Chandra's Phoenix, and Searing Blood triggers. Wish me luck!

Tom Ross is a Pro Tour Top 8 competitor but also the Boss. He is one of the most impressive deck designers of the modern era, responsible for Luis Scott-Vargas's 17-match streak with Boss Naya, and more recently winning the StarCity Invitational with Boss Sligh. Learn how to beat down, build, and play better by following Tom at @Boss_MTG.