This past weekend I finished in fourth place at Grand Prix Pittsburgh playing G/W Hate Bears. I had for a while been playing B/W Tokens, but given the current popularity of R/G Tron, Naya Burn, and Titan Bloom (all bad matchups for Tokens) I decided it was time to switch to G/W Hate Bears.

Today I'll talk about my tournament, show you videos of me playing the deck in the tournament, and offer play advice, sideboard strategy, and updates to the deck. If you're looking to hate on Modern with a pile of Grizzly Bears, I'm here today to share with you how it's done.

Here is the deck I played:

Here is how my tournament went:

Ghost Quarter and Tectonic Edge really shine in this matchup. They keep the opponent from assembling all three parts of Urza Tron. Most lists only run one or two Forests, so even without Leonin Arbiter (henceforth 'cat') or Aven Mindcensor (henceforth 'bird') it doesn't take long before they run out of Forests to find. Cat and bird are also individually good against Tron as they keep Expedition Map and Sylvan Scrying in check. Post-board Stony Silence turns off Sphere, Star, Map, and Oblivion Stone. Forge-Tender counters Pyroclasm and Gaddock Teeg keeps Karn and Ugin off the board in case the opponent is able to assemble Urza Tron.

I played against fellow UltraPRO teammate Ari Lax this round, so we knew each other's exact lists before the match started.

In general you want to trade off cards as early as possible, whether that means blocking or using removal spells on opposing attackers. You want to take as little damage as possible to stay out of burn range. Our creatures are larger and will thereby dominate the board in the later stages of the game, so we want to minimize the chances of getting burned out by the time we get to that stage of the game. Post-board we bring in a bunch of protection from red creatures to block with. Kor Firewalker also gains us life while Burrenton Forge-Tender can counter a burn spell and thereby also essentially act as a life gain spell. Sigarda is not great in the matchup but it's playable because post-board the opponent has to rely on Path to Exile to deal with our creatures and thus ramps us up to five mana for the angel. Once on the battlefield it trumps every other creature.

This is what Alex had to say about our match in his tournament report:

"In round six I played against Craig Wescoe on G/W Hate Bears. After losing game one, I was on the play for game two. Wescoe's first two turns were Ghost Quarter, AEther Vial and Tectonic Edge, second AEther Vial. On my third turn I topdecked a crucial Engineered Explosives that I played for one and activated to slow him down immensely.

To no surprise, Wescoe went on to Top 4 the tournament and I considered myself very fortunate to not have to face him again. Leonin Arbiter, Voice of Resurgence, Qasali Pridemage, Thalia, Guardian of Thraben, Loxodon Smiter, and Spellskite all put constraints on my deck. The white splash for Path to Exile was extremely important here, and I'm not sure that I could have won if I had been playing any other version of Twin."

As Alex points out, this version of Twin is more difficult than U/R Twin since Path to Exile and Restoration Angel are each strong in the matchup. The matchup is close and came right down to the wire. It would have been a sweet finals if I had gotten past Aaron Webster in the semifinals.

I played Brad Nelson on Infect in Round 15 and each time the match was close. Their Spellskites are good against us because we only have a handful of removal spells. Fortunately we have a lot of other ways to disrupt them. They have few lands, so our mana denial plan can sometimes be effective. They also rely on searching their library, so cat and bird can be good. Our creatures outclass theirs in combat so, whenever possible, we want to engage in combat, even if it means trading our creature for their pump spell (and their turn).

Dismember is instant speed interaction with little drawback since life loss is rarely relevant. Gaddock Teeg stops Become Immense, and Spellskite Redirects all the opponent's pump spells to itself. Spellskite just has to dodge Twisted Image. Remember to eat cards from their graveyard with Scavenging Ooze when you have extra mana open (even if you have to take a point from Horizon Canopy to do so) in order to keep them off Become Immense.

Ghost Quarter and Tectonic Edge are just as important in this matchup as they are against R/G Tron, as are Leonin Arbiter and Aven Mindcensor. Dismember is good to deal with Platinum Angel and Choke is a way to shut down most of their mana. Stony Silence is also a back breaker and Gaddock Teeg keeps them from casting any of their relevant spells, including Repeal and Condescend.

This match was close but Leonin Arbiter did a lot of work with Ghost Quarter and Path to Exile. He also ran Unflinching Courage which would have taken over the game if I didn't have a final copy of Path to Exile to deal with his threat and swing the game in my favor. He also had Gavony Township instead of Ghost Quarters.

See my Round 5 match against Ari Lax.

Gamethree of the match can be watched here, beginning at the 31:30 mark:

Game one can be rough unless we draw Path to Exiles and Qasali Pridemages. Games two and three get much better when we bring in four Stony Silence to shut down half their deck, Forge-Tenders to counter Whipflare or Galvanic Blast and Dismembers as additional cheap removal spells to be deployed at key moments in the game.

In one of the post-board games I kept a seven-card hand of Horizon Canopy, Ghost Quarter, Razorverge Thicket, Tectonic Edge, Noble Hierarch, Noble Hierarch, and Linvala, Keeper of Silence. I'm not sure if this is correct, given the presence of four Stony Silences in my deck that I can mulligan into. Either way, I lost. The matchup is pretty close and if you want to improve it, you can make it as good as you want it to be. Maindeck you can add another Qasali Pridemage or two. Sideboard you can add Sunlance, Creeping Corrosion, and/or Kataki, War's Wage.

Thalia is solid in the matchup but is slightly worse than any other card in the deck. The matchup is mostly about keeping them from assembling the combo. We have Path to Exile and Qasali Pridemage to do so main. After board we bring in Dismember, Gaddock Teeg, and Spellskite as addition forms of disruption. Linvala, Keeper of Silence also keeps them from winning. Forge-Tender protects our more important disruptive threats and Choke can keep their mana in check.

This is a bad matchup but clearly it is not unwinnable. I beat it and so did my UltraPRO teammate Matt Sperling (against Ben Friedman). The key is to apply some pressure and some disruption, taking away as many of their paths to victory as possible while also minimizing their draw steps to find their way into a different path to victory. Make no mistake, they have inevitability if given enough time, so tempo is relevant. Scavenging Ooze can keep them off Goryo's Vengeance, Gaddock Teeg can keep them off Through the Breach, Thalia can slow them down, Aven Mindcensor and Leonin Arbiter can keep their fetch lands in check, and Path to Exile can sometimes take care of a Griselbrand in time.

Most of the match can be watched here: (as the back feature match)

If they have the nuts they can beat us, but their typical draw affords us a chance to resolve Leonin Arbiter on the second turn, which slows them down considerably. Qasali Pridemage can also take out an Amulet of Vigor quickly to slow them down. Path to Exile can kill Primeval Titan. Ghost Quarter and Tectonic Edge can end their attempt to go off. Remember you can respond to an Amulet trigger by killing the land before it untaps. You can also sometimes put them off enough mana to pay for Summoner's Pact. Dismember comes in primarily to kill Azusa, Lost but Seeking. Gaddock Teeg is to shut off Hivemind. Spellskite is not great but stops Slayers' Stronghold.

See my Round 7 match against Steven McCoy.

The key play in the match came in game three when I activated AEther Vial for two in my main phase, putting Leonin Arbiter into play, turning off Brad's Misty Rainforest. I then Ghost Quartered his Breeding Pool and Path to Exile'd his Noble Hierarch, leaving him with nothing but a Glistener Elf and an uncrackable Misty Rainforest. This prompted a "What just happened??" from Randy Buehler after I completely crippled Brad's board position. A few turns later I attacked for lethal, but that was certainly the key turn of the game. Afterwards Brad said it came down to lack of experience and that he should have cracked the Misty Rainforest in response and could have made a game of it. Gitaxian Probe would have also tipped him off as to what was going on, but he had not drawn one of those in game three.

I played against fellow UltraPRO teammate and (locked for) gold level pro Corey Burkhart this round.

This was probably the most exciting match of the tournament. If you watch only one, it should be this one. The games each went back and forth several times. It illustrates G/W Hate Bears' ability to hang in the long attrition fights. In game one I beat a Jace that was active for several turns. In game two there was a key sequence that involved five back and forth plays that resulted in me gaining a significant board advantage that Corey eventually could not get out of: (1) I play Scavenging Ooze; (2) Corey casts Kolaghan's Command dealing it two damage and having me discard a card; (3) I discard Loxodon Smiter; (4) Corey casts Dismember on the Loxodon Smiter; (5) I resolve Choke, locking down all his blue sources for the rest of the game, eventually resulting in him dying with a hand full of blue cards.

See my Round 11 match against Chris Chichy.

Each of the players in the finals had to get through me and they each (narrowly) did.

These are how my matchups went throughout the tournament:

Judging by the numbers, Affinity is clearly the matchup that could use the extra boost. Fortunately that is the easiest matchup to improve. Just add some Kataki, War's Wages and/or Creeping Corrosions to the sideboard, or more generally useful cards like Sunlance can improve things. Maindeck you can also up the Qasali Pridemage count to three orfour4.

Modern is in large part a numbers game and as it turns out; had I afforded myself slightly more Affinity hate, I may have won the tournament. Nevertheless it was still a strong finish and demonstrates just how playable even the fairest deck in Modern can be. Modern is not always about broken combos; sometimes it's about a cat and a few bears that just ruin your whole day! 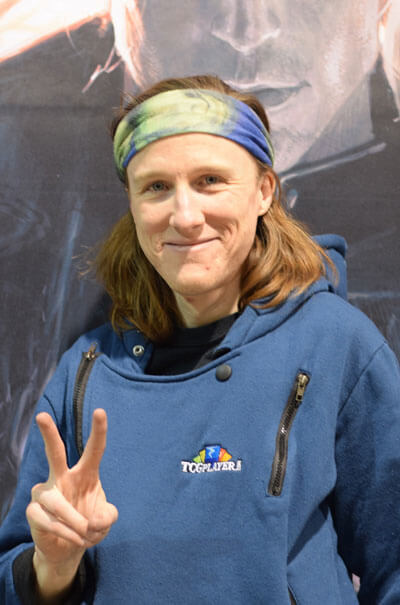