...and the Lord of the Multiverse said to Gideon, "It is not good for a planeswalker to be alone," and so the Lord created Nissa and brought her to Gideon who jubilantly exclaimed:

"Voice of my voice! Planeswalker of my heart! I shall call you Nissa, Voice of Zendikar! Together we shall grow plants and make Ally offspring and they shall have dominion over the entire plane of Zendikar!"

And the Lord of the Multiverse saw that it was very good... 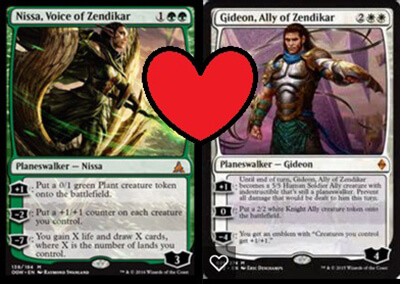 Wow, Nissa, Voice of Zendikar is awesome! She defends herself (as well as Gideon and our life total) with Plant Tokens and then pumps up the Plant Tokens and all our other creatures whenever we deem it necessary. She can also essentially produce endless amounts of anthem effects. If you draw her later in the game, she can even just start out as a Glorious Anthem while sticking around!

The other awesome new card for this deck is Oath of Gideon. Producing a pair of Ally tokens fits with the token theme of the deck while also providing ways to protect the planeswalkers. The tokens raid Wingmate Roc, get pumped by all our anthem effects, and keep us alive against aggressive decks such as Atarka Red. The other useful ability of Oath of Gideon is that our planeswalkers enter the battlefield with an additional loyalty. This is great for Nissa because it means she can produce two consecutive anthem effects if we decide to do that. It is even better for Gideon because it means we can immediately create an anthem emblem without losing our Gideon! These two new cards really put the Green/White archetype back on the map, pulling together all the best cards in green and white in Standard.

The game plan for this deck is to fill the board with creature tokens and then make them bigger with anthem effects. The planeswalkers of the deck act as both token makers and anthems. We are a Knight of the White Orchid deck and therefore want to draw first in the dark game one, and also in games two and three against everyone except Atarka Red, B/W Warriors, and Eldrazi Ramp.

On the second turn of the game we can Silkwrap the opponent's threat or we can play a Hangarback Walker. Then on the following turn we can play Knight of the White Orchid, Oath of Gideon, Nissa, Vastwood Seer, Nissa, Voice of Zendikar, or Stasis Snare on the opponent's threat. Then we curve into Gideon, Ally of Zendikar, Secure the Wastes, and Wingmate Roc. The deck affords many decisions and lines of play. For instance, when do you make tokens and when do you make anthems? When do you Remove threats and when do you commit to the board? One especially important interaction to time correctly is flipping Nissa, Vastwood Seer the turn you cash in your Nissa, Voice of Zendikar for the final "anthem" of +1/+1 counters on your creatures. Otherwise it will die to the planeswalker rule.

Let's talk about how I expect some of the popular matchups to play out with this deck and my corresponding sideboard plans.

These are especially important against Abzan and Esper Dragons. Against Abzan they kill Anafenza, the Foremost and Siege Rhino. Our only other way to handle Rhino efficiently is Stasis Snare, so doubling that number to eight is a big boost. Silkwrap can help with Anafenza, but we plan to use those on Warden of the First Tree, Den Protector, and Hangarback Walker if they play those. Our removal gets a little taxed in the matchup and Valorous Stance is the best one to bring in against them. Against Esper Dragons it kills an attacking Dragonlord Ojutai. I'll also sometimes bring in one to two copies against R/G Landfall to break up the Become Immense combo.

These are great against any form of Esper (Dragons, Tokens, Control) and also against Eldrazi Ramp. The plan against Ramp is to tap out for Secure the Wastes in response to Ulamog, the Ceaseless Hunger and then untap and play an anthem effect (Gideon or Nissa) and attack all out. You can also take this same line against Ugin, the Spirit Dragon except you would obviously cast Secure the Wastes during their end step instead of in response to the Ugin.

This is our best card against Abzan, so I want the fourth copy against them. It's more powerful than Secure the Wastes against Jeskai but it also has a higher cost because it gets countered by Ojutai's Command. So, really, I only want to bring in the fourth Wingmate Roc against Abzan and other non-blue midrange decks (B/W, Mardu, etc.).

The primary purpose for these is to beat Rally the Ancestors or Collected Company. It also works well against token-based decks such as Esper and B/W. Ideally you counter Secure the Wastes, but it can also be "cycled" usefully against Wingmate Roc or Gideon, Ally of Zendikar. I don't really like bringing these in against Hordeling Outburst decks because it's hard for us to keep mana open the turn they cast Outburst. I'd rather fight their tokens with our own tokens and with our Archangel of Tithes.

Speaking of Archangel of Tithes, her primary purpose is to combat opposing Hordeling Outburst decks (Atarka Red, some variants of R/G Landfall). Our mana can support her just fine. We have 22 sources of white mana in our deck plus four Knight of the White Orchid. It's the single best card in the format against Atarka Red.

These come in against Atarka Red and R/G Landfall. They regain some life in a matchup where life is critical and they disrupt the combo kill if they run that (Temur Battle Rage + Become Immense). It also blows out Titan's Strength in a pinch. I also bring these in against B/W Warriors and Abzan since they have enough important targets. It's a slightly narrow removal spell against Abzan though, so I don't want more than two copies. And if I'm only bringing in two copies against Abzan then, instead of running a third and fourth copy, I would rather run the first two copies of Archangel of Tithes since that card is better against Atarka Red.

This one is kind of an all-purpose card that is decent against a lot of decks but we rarely want to draw more than one copy of it. It can kill an Outpost Siege or a Silkwrap. It can fight down a Jace, Vryn's Prodigy but not on the second turn since we don't run Warden of the First Tree. The best creature for fighting is our Gideon, Ally of Zendikar (5/5 indestructible). The command also counters a lethal burn spell and/or fights a creature in response to Become Immense.

Cards to consider include: Warden of the First Tree, Deathmist Raptor, Den Protector, or Prairie Stream for Dispel, Disdainful Stroke, and/or Negate.

Warden of the First Tree is a strong card but is awkward with Knight of the White Orchid. There is no way to play it on turn one and fetch a land with Knight on the third turn. I suppose we can play a tapped dual land on the first turn and then cast Warden on the second turn and Knight on the third turn (and then level Warden on the same turn), but this requires having one of our six dual lands and isn't all that impressive anyway even when everything comes together. We also have a lot of things to do with our mana in this deck, so losing a few late game mana sinks is not that bad for us. Warden is the card most on my radar though as it may just be good enough anyway.

Deathmist Raptor is also a card to consider for this deck, but then we would want Den Protector to bring it back. There simply isn't enough space in the deck to do that without significantly diluting the token + anthem theme or cutting our removal spells. I don't like paying either of those costs.

The other option is playing Prairie Stream and splash some blue counters (some combination of Dispel, Negate, and Disdainful Stroke). This would be easy enough mana-wise since we already have eight lands and four knights that can fetch Prairie Stream. That's 13 blue sources off a single copy of Prairie Stream. The question is whether we want the counters. I'm starting off without them because I think we have sufficient tools against everyone without them. We have planeswalkers to survive Crux of Fate; we have Hallowed Moonlight for Rally, and we have Secure + anthem effects vs. Ramp. Dig Through Time could be problematic, but our plan against Dig decks is to pressure them and to keep up with their card advantage via our planeswalkers. If any of these cards/matchups become too problematic, I would look into splashing blue for Counterspells.

I can't wait to start playing this deck! I love token decks and everyone knows green/white is my jam. This deck feels like it has everything I want from a Magic deck! Nissa, I love you!

Also if you don't have Gideon, Ally of Zendikars due to card availability, you can use Allied Reinforcements as a temporary replacement until you can acquire Gideons.

In case you need something to play before Oath of the Gatewatch is legal, I played Black/White to a 37th place record (11-3-1) at Grand Prix Oakland this weekend. It also gained a few new cards from Oath of Gatewatch. Here's the list I played:

These were my results:

In the dark I choose to draw first game one. I play first against Atarka Red, B/W Warriors, and Eldrazi Ramp but draw first everywhere else. The reason is because Knight of the White Orchid.

These are my sideboard plans:

Given that Jeskai decks are moving away from Mantis Rider and Rally has been picking up steam, Wasteland Strangler has gotten considerably worse. As a result, I think something more like Jeff Hoogland's B/W Midrange deck might be a better choice right now for Standard. Secure the Wastes in conjunction with the anthem abilities of Gideon, Ally of Zendikar and Sorin, Solemn Visitor is better against the field than Wasteland Strangler. My deck has been moving in that direction.

I liked having Transgress the Mind in the deck, but I don't know if it's good enough without Wasteland Strangler. Ob Nixilis Reignited was a really good addition to the deck, especially against Abzan. Hallowed Moonlight was a big upgrade over Disdainful Stroke against Rally but losing stroke hurt us against Esper Dragons. Brad Nelson beat me with Crux of Fate in the last round to finish in 9th place.

Archangel of Tithes was my least used sideboard card but only because I didn't get paired against any Atarka Red decks. The sweat spot might involve adding a couple copies of Duress to the sideboard over a pair of Archangels for the control decks while still being decent against Atarka Red.

From Oath of the Gatewatch you get Kalitas, Traitor of Ghet to gain life against the red decks and to stop Rally decks from being able to combo (which also turns off Zulaport Cutthroat). We could also potentially replace Wasteland Strangler with Oath of Gideon. Flaying Tendrils is also a sideboard card worth considering against Red decks that doubles as a good card against Rally. These are the cards from the new set that I would want to test first.

I'm liking the upgrades that Oath of Gatewatch brings to my white decks. Green/white got two huge boosts (Nissa, Voice of Zendikar and Oath of Gideon) and black/white got a few sweet cards too. In two weeks I plan to talk about red/white and their awesome new creature land! Next week will be my Financial Predictions article where I analyze the entire set and its impact on Standard, Modern, and the Magic Economy.