With the holiday season well upon us, many of us are searching for great gifts for our Magic-playing friends. My group used to do a Yankee Swap, so each of us were tasked to find a gift everyone would like. I found this nightmarish. There were always a couple of Holiday Gift Boxes, a random playmat and some funky booster packs. These are all fine gifts, but when you have a player who desperately needs deck boxes (please don't hold your decks together with elastic bands!), and another who owns no playmats, you never knew who was going to end up with what.

Given that half the players weren't getting a gift they particularly wanted, we looked for an alternative. We could draw names, but if someone couldn't be there that night, it was lousy that the player they had wouldn't receive a gift that night. This is when we opted for the Wacky Draft option!

For those who don't know, a Wacky Draft involves a regular draft, but everyone in the draft is opening all different packs. With eight drafters, there are 24 different packs! There are positives and negatives to a Wacky Draft. The negatives are tied to the variability of the draft. You are not going to build much of an infect deck if only one or two packs include cards with infect. Themes within blocks may not work with the limited number of packs you'll see in the set. This usually means you are looking at themes that are true across Magic. Red will have burn spells. White will have small, efficient creatures. Blue will have ways to disrupt what the opponent is doing. The positives of a Wacky Draft tend to involve reminiscing about sets you haven't seen in a while, opening up wildly powerful cards and finding themes that do work across multiple blocks that no one else has found because no one else has drafted those particular sets together. The joy of Wacky Draft is getting into the experience of the draft; we start by drafting the boosters, and typically everyone is jockeying for who will get to open which pack first! While I wouldn't want it as a weekly format, once or twice a year it proves to be a fun variant.

Doing a Wacky Draft really worked well for our group. Everyone who was coming would announce in a group email what packs they were bringing, so there would be no overlap. We set a price cap ($20 for us but you could certainly go higher or lower) and expected everyone to spend to that amount. For most of us that meant spending more for a single pack from Magic's history, then buying two regularly priced packs from the more recent sets. As a particularly casual group, we had Unhinged, someone who offered Fallen Empires and Homelands together as one pack, and someone who offered up Conspiracy. If your group is a little more serious, you can expect Modern Masters, something from the Urza block, an Alliances pack or other packs that promise powerful spells.

Wacky Draft meant that we weren't getting lackluster gifts we weren't particularly excited about, but instead were getting a night of fun that was different from our usual fare. Since it was a gift, the idea of spending more money on a single pack of cards was easier to swallow. It becomes more about the experience of sharing the draft with friends than the drafting itself. We have had a great time doing it and we're doing it again this week! I'm bringing Conspiracy 2, Modern Masters, and four packs of the Ugin's Fate promo boosters I still had left over from the prerelease.

I was introduced to a variation on this theme just last weekend. My "normal" week involves playing on Thursdays with my regular group, but over the weekend, I drove out to Syracuse from my home in Boston to play some Magic with my good friend and this site's Content Manager, Adam Styborski.

One of the things we did over the weekend was Wacky Sealed. For this format six packs from different sets (and even blocks) are assigned to each person. That person then builds a deck from those cards and plays their games with that deck. In our case, we each received the same six packs, since Stybs had enough of each set to pull it off. This balanced the field a little since it would hardly be fair to give someone a Modern Masters pack and someone else an underpowered pack of Mercadian Masques.

This format worked particularly well with the group there. Three of the players were new to Magic, having played for less than a year. Asking them to draft all these different packs could really limit the fun they would have. This way, they saw fewer cards and wouldn't be victimized by better players taking the best cards from each pack. We also ran two four-player multiplayer games. This tended to allow the weaker players a little more time to set up than they would have with one opponent completely focused on them.

So what boosters did we use?

Time for sealed! Let's do this! pic.twitter.com/44ObTQovYx

This allowed for a rather eclectic mix and made for a lot of fun. We discovered that many of us are "degenerate pack crackers," so opening six packs instead of just three from a draft proved exciting. One group of four played through a few games in just over an hour, while my group had a grinding game that lasted the full time.

Wacky Sealed was great for the new players and produced some fun games. I don't think it is as wacky as a draft, since in the draft you are seeing so many more sets of cards, and Wacky Sealed can also be difficult if you don't have a benefactor like Stybs. If you are planning this, I recommend having one person make all the purchases, then split the cost among the players that night. If you can, I'd also recommend one-on-one games. Wacky drafts tend to produce decks that are less powerful than the average draft deck, so they are prone to stalemates, particularly with multiple opponents. One versus one keeps things moving a little better.

While these are my recommendations, there are all sorts of options with Sealed. Another possibility is for each player to buy packs from six different sets, then draft those packs and build sealed decks with what you draft. To prevent brokenness, the set of packs each player brings can be assigned randomly. This could lead everyone to choose a great set of cards in hopes of getting their set back, or choosing bad packs to mess with someone else! Either of these options sounds like a blast.

You can also choose to draft the packs, then build the decks. Do you try to draft all the packs from a weaker block, hoping no one else will take them? Do you opt for what you believe are the most powerful sets? Do you take Worldwake or Alliances and get a ticket for the Jace the Mind Sculptor or Force of Will lottery? I would recommend the Conspiracy/Un-set combo, but that's just me!

The real fun to any of these options is sharing it with a great group of friends. My Thursday night group has been playing together for quite a while and we know each other well. These are the friends who put up with my crazy ideas and general lunacy on a weekly basis. They are my "poker night" group and my life is better with them in it.

Then there are my online Magic friends. I only tend to see these people at larger conventions and nearby events. Stybs and I have been friends for a while, getting to know each other well over the years. We chatted regularly online, then he made a trip to Boston for a GP and stayed at my place. We got along swimmingly and try to spend time playing Magic (and eating steak) whenever we can.

We worked out a weekend when I could get out to his place in Syracuse and set things up. Stybs was going to round up a few friends from the TCGplayer family and I started thinking about a new Commander decklist to bring along. Queen Marchesa from a few weeks ago came out of that! I got the chance to meet and talk to Ryan and Jon from the TCGplayer videos, as well as Aimee and Meghan, who is responsible for me appearing as the Monarch and Bruse Tarl!

Adam, however, is not one to let an opportunity go to waste. Once he knew I was coming, why not invite others friends along? He soon had Andrew and Josh coming in from New York and Buffalo. These are friends I talk to online, but only ever get to meet in person at GPs and conventions. They kept the whole thing a secret and surprised me upon arrival.

Everyone had a great time with Commander games and Wacky Sealed through the afternoon, and the four of us continued gaming into the deep dark of night. Being involved in the online Magic Community has brought me a great group of friends. 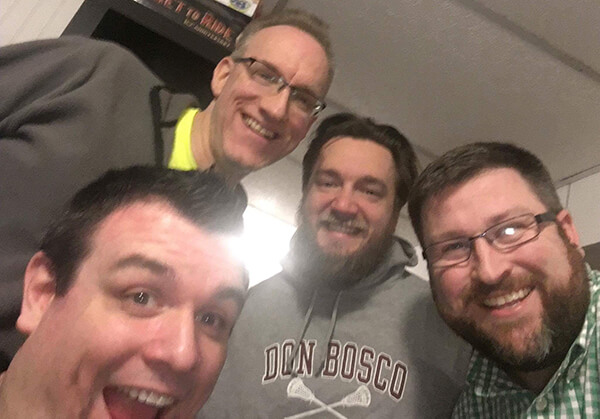 The focus of the holiday season is often lost, as we run about buying gifts and forget the people behind the gifts. Magic has given me great friends, both locally and across the country. When the gifts can help bring memorable moments and good times with friends, the holidays find their meaning.