This is not about a Gordon Ramsay television show, but it is about food. 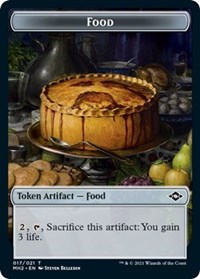 That's right, a Food deck in Modern. The archetype I'm talking about is mostly brand new, as many of the cards are from Modern Horizons 2. I wouldn't say that Hell's Kitchen is the default name for the deck yet, but I have seen it called that. We will get into what the deck is doing, and some different variations on this Food and artifact-based strategy.

This is a 5-0 list from a League on MTGO by "Kogamo", who is actually the great Kenji Tsumera:

This is one of those decks where if you just look through the list, you may not realize everything that's going on. If you have been impressed with Cauldron Familiar plus Witch's Oven in formats like Standard and Historic, it is better than ever in this deck. This deck needs to create Food, and Witch's Oven really gets your engine going.

While you have more ways to make Food with cards like Gilded Goose to help make the deck run more smoothly, there is one way this deck can start generating Clue and Treasure tokens. Academy Manufactor is one of the new Modern Horizons pieces to this deck, and by making Clues and Treasures alongside the Food you get to take a lot of game actions. The Treasures provide extra mana which you can then use to pop the Clues to draw cards. Everything works well together.

The extra cards the Clues provide allow this deck to snowball. Oftentimes you can find a second copy of Academy Manufactor which makes it even more fun, and of course you get plenty more tokens. This deck almost always has something to do with its mana. While this is good, it also means the pilot of the deck will have a lot of options each game.

You want to be discarding cards from your hand in order to cast Asmoranomardicadaistinaculdacar (try saying that card out loud!) "Asmoranomardicadaistinaculdacar" is making a major impact on Modern. You can use it as removal if there are a couple spare Food tokens lying around, but that's not why it's in the deck.

In order to play Asmoranomardicadaistinaculdacar from your hand it's necessary to have discarded a card from your hand, but once you do, it is a one-mana creature that also allows you to search up a key card in the deck, The Underworld Cookbook. The Underworld Cookbook is one of the cards that enables Asmoranomardicadaistinaculdacar because it's a discard outlet. These are two cards that will always go in the same deck. Get used to seeing them in a lot of different shells, because of how well they work together.

The Underworld Cookbook makes Food as needed, and that's what it's used for the most, but being able to cash it in to return a threat to your hand definitely comes up as well. Notice this deck also plays a playset of Street Wraith. That may look odd, until you realize this is a way to discard a card from your hand, and allows you to cast Asmoranomardicadaistinaculdacar as early as turn one.

There are many ways to search for The Underworld Cookbook, so assuming you will have access to one is quite reasonable. Once you do have one in play, Ovalchase Daredevil becomes the card you want to discard to it, as it is essentially free, since it will return back to your hand as the Food comes into play. This means The Underworld Cookbook is now giving you a free Food every turn. Notice the one copy of both Urza, Lord High Artificer and Mayhem Devil. Playing single copies of these creatures makes sense, as they are tutor targets for Finale of Devastation. Finale of Devastation can tutor up an Asmoranomardicadaistinaculdacar which might be the most important creature in the deck, but later on Finale is a win condition. Sometimes you can actually cast the Finale using a full 12 mana, if you have some extra Treasures lying around to help generate mana.

Gilded Goose being able to produce any color of mana helps to facilitate splashes. Both Urza, Lord High Artificer and Mayhem Devil can be hard cast, as the manabase does support that. Mayhem Devil can start pinging anything, from your opponent to their creatures to their planeswalkers, and Urza, Lord High Artificer allows a ton of mana generation alongside all the artifacts this deck can produce. Both cards are major threats that close out games, whether you cast them directly or tutor them out of the deck. It wouldn't be an artifact-based deck without Urza's Saga. This card has made a huge impact on the Modern format, to the point it's played in a ton of different strategies, but this is a deck that fully utilizes it. The mana here is surprisingly solid as all your other mana sources produce colored mana. The Construct tokens can get massive very quickly, and both The Underworld Cookbook and Witch's Oven are important grabs off Urza's Saga.

While it's very possible Urza's Saga will get banned at some point, right now it's making decks that want to play artifacts even better than they normally would be, and that's the case with this deck. Remember that Food tokens are artifacts too, and together they make your Constructs huge. Notice the one-mana artifacts in the sideboard? They're here because of Urza's Saga. There are definitely matchups where having easy access to cards like Nihil Spellbomb, Aether Spellbomb, and Pithing Needle is important. Trail of Crumbs isn't in the maindeck, but if you are playing a slower matchup it can become an all-star option in longer games. Since the deck has access to blue mana, Metallic Rebuke provides a really smart and surprising element to sideboard games.

Oftentimes game one you are able to operate your primary gameplan much more easily. If the opponent for instance brings in graveyard hate you need cards like Force of Vigor to answer hate cards. The single copies of the various creatures in the sideboard also make sense because they can be tutored up via Finale of Devastation.

Clearly the deck has a lot of moving parts, from the Food generation, to the discard outlets, to the various tutor effects, to the extra tokens. The deck does a lot of different things. The bottom line is that against any deck that tries to play a fair game of Magic and isn't trying to combo-kill you or win extremely fast, you will be very happy. Similar to other formats, the Food generation starts to really add up if left unchecked for a few turns.

While I personally like the Kogamo list, there are plenty of other cards and options you can go to with this style of deck. Let's look at a version that finished in third in a recent Modern Challenge that showcases some other cards the deck can play:

This is I believe the more common version of this deck, as it opts not to go for splashes for Mayhem Devil or blue cards, and stays straight Golgari. This makes the mana a little bit better but also allows you to fit in cards that you couldn't otherwise find room for. Many of the same core elements exist when comparing both lists, but there are a couple of key differences. One way to truly go over the top with the Food theme is to play Feasting Troll King. This deck can produce Food fairly easily as has been already mentioned, so many versions of this deck opt to play Feasting Troll King. You can discard it to The Underworld Cookbook or Lotleth Troll to cheat it into play directly from the graveyard. Speaking of Lotleth Troll, this is another synergy card that works well alongside cards like Ovalchase Daredevil and Asmoranomardicadaistinaculdacar. You can really make the Lotleth Troll massive by discarding Ovalchase Daredevil repeatedly. There are also more maindeck tutor targets for Urza's Saga. Shadowspear is a neat addition, and a card that makes life impossible for decks trying to race you with creatures. Naturally, as you add cards some things have to go. This version of the deck can't go as crazy with tokens, as it does not include Academy Manufactor.

I think we are looking at one of the better decks at maximizing Urza's Saga. However, if Urza's Saga were to leave the format, this deck would of course need to change a bit. As it is, the deck is incredibly consistent, as you almost always have access to the key pieces of the deck like The Underworld Cookbook. The two biggest knocks on the deck are that it isn't that interactive with other decks game plans, and graveyard disruption is very strong against it. Those knocks are going to be easier or more difficult to overcome based on matchups, and what other decks are up to.

It will be interesting to see if there is a consensus build of the deck that emerges, as there are clearly some important core cards, but a few different directions to take with the flex slots. For players that like grindy decks with lots of synergy and tutor packages, this is the deck to pick up. Right now, there are a ton of super powerful things you can do in Modern, but this is definitely one that is worth keeping an eye on.