Modern Masters releases are one of the most exciting times for Pauper cube updates. Seeing powerful uncommons – and rares – get bumped down to common means upping the power and quality of cards.

Not that Wizards is rushing to print powerful commons in regular sets anyway.

The Aether Revolt update intro was a solid start, so I'm repeating that here:

Typically, I use a boilerplate into to cover bases. Here I'll just bullet them out:

- The Shadows over Innistrad update covered archetypes and philosophy.

- Archetypes are important, and I refine them often.

- I use a Google Sheet to keep my cube organized. (Yes, I'm aware of alternatives.)

The Pauper Cube is bigger than what I do with it. I get questions around cards that are common-by-rarity-sheet-it-was-printed-on (see Maze of Ith, et al.) or available only in limited release (anything Portal: Three Kingdoms can be challenging to find), the relative power of archetypes (such as why blue is/isn't the best color) and what uncommons might make good choices as Pauper Commander commanders in a pre-draft packet. While my cube is a good starting point, you should feel free to adapt and update to suit what you need—and Fire Ambush isn't going to be something every cube needs.

With that out of the way, let's roll.

I'm not going to review every new-to-common card. While that could be fun, I'd rather touch on what I have to share from Modern Masters 2017 and focus on what's actually changing. With that said, I wish stronger white cards made the cut this time. There was no Humble this time around.

There's enough self-mill to make things work now, and the Sage was rarely the value proposition I wanted it to be. Augur of Bolas fuels the spell-heavy blue decks, and blocks on the ground exceptionally well. It's also a blue creature that you can respectfully cast on the second turn, something sorely needed to give Halimar Wavewatch a breather.

Drawing a guaranteed card feels great. Waiting for that to happen on opponents' terms is not. Exultant Cultist is a fine card for blocking, but blue has no shortage of flying creatures that attack too. Taking control and drawing more cards should encourage proactive blue decks and plays, particularly with white and red. Tandem Lookout should be fun.

One of the recurring themes about my cube I've received as feedback is how much "fun" it is to play. This is a function of both the high power level (for commons) and the focus on identifiable and supported archetypes – players of all types can appreciate and play together. One of the feel-bads shared early on was discard. Hymn to Tourach is the classic paper Pauper offender, but Mire's Malice was meant to be a value six-drop that took you down a land, not a four-mana control piece. Grixis Slavedriver is a ton of value, and can even find its way into more aggressive decks as a top-end option. And if you mill it, you're probably happy anyway. Sell-mill gets the sweetest tools these days.

Wailing Ghoul is another graveyard-filler cut, getting swapped for a juicy Gnawing Zombie that can both block and make extra creatures turn into reach plus life gain. This will be best friends with Pestilence, and gives a little extra flavor to mixing white's token makers with black's control cards.

This is a texture change as I wanted haste with at least three toughness – something Talruum Minotaur has – but also wanted to keep at the four-drop slot. Firefiend Elemental is great when renown goes off, but fighting past something with two power should be easier with the Minotaur instead.

If you don't like this, don't swap. If you do swap but don't use the sweet Mirage artwork you're doing it wrong.

Suq'Ata Lancer is a longtime member of the cube. Haste and pseudo-evasion with flanking kept it in longer than I expected. Red has plenty to do at three mana, and plenty more haste options in the mix today than five years ago. Scourge Devil is friends with token strategies, gives red decks another late-game option, and adds to the top-end that's missing on red. This should be a fine switch.

I like slower burn still, but Magma Jet and Thunderous Wrath really don't fit anywhere else. Volcanic Hammer and Fire Ambush are still on deck, but getting these new gems into the cube seemed important and burn doesn't feel overwhelming all the time.

Here's a big beat that's going to get a few purists riled up. Like when Hymn to Tourach went away, and now Mire's Malice as noted above, discard effects are generally unpleasant. Black and blue have plenty of ways to deal with threats at common, and Probe ending up more like Compulsive Research with "kicker: stomp on your opponent more and cackle evilly."

Dinrova Horror has a few flicker effects in white – building Esper value is a thin but viable-in-theory proposition – but more importantly it's a creature. Blue-black has struggled with solid bodies, and 4/4 is just big enough to be a problem. Requiring two colors limits the potential for other decks to snipe the card, leaving it in a good spot for anyone in both to end up with it.

It's still probably a beating, but it's a lot harder to dunk all over an opponent outright. If you work for you, you earned it.

Spike Jester is more-or-less an upgrade over Rakdos Shred-Freak. Requiring both red and black mana is a small price to pay, and only hyper-aggressive decks want it anyway. This is a banal swap. Carry on.

Red and green have plenty of bodies at five mana, and (wisely) nobody likes using bloodrush as a combat trick with so many instants around. Burning-Tree Emissary enables faster openings and making two plays at virtually any step of the game for red and green. This should be a high pick for anyone that wants to be aggressive in those colors and will be a fearsome card to accelerate appropriate decks.

Now I don't have to choose between a Grizzly Bear and Rampant Growth on the second turn.

What's better than a 2/2 that dies to become a 1/1? I don't know if a 3/3 green Centuar creature token is a correct answer, but it's as close to Watchwolf at common as it gets. Safehold Elite is a reasonable card – no doubts there – but a 3/3 on the second turn is mighty impressive to face down for commons. I'm looking forward to seeing this run in early to attack an opponent's weak point for massive damage.

If you get the reference you're old, like me. If you don't, here.

An Amonkhet Preview (The Thing You Actually Wanted)

Let's talk about Hieroglyphic Illumination, and what cycling means here. 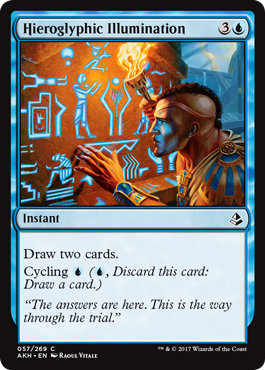 There is a laundry list of cards at common in blue that draw cards. Some are expensive and slow – five mana and a sorcery – and don't create any real value. Others are cheap but aren't pure card advantage – Catalog, for example, is an instant, but it's really just card filtering.

Now Catalog is a fine card but filtering isn't as powerful as ending up a card, a lesson in why Compulsive Research makes the cut despite being a sorcery. I've experimented with Inspiration – four mana instant Divination from ages ago – effects before. Comparative Analysis looked right – It was Divination in cost as an instant thanks to surge! – but played wrong. Drawing cards by playing a spell first didn't actually leave you up a card, and forcing Inspiration at four mana was tough as blue is choked there already.

Hieroglyphic Illumination is one way to solve the problem. Cycling away for one mana or waiting to draw two as four mana is much closer to the gameplay expected than setting up surge. Ending up a card or fueling a Treasure Cruise (or other delve cards) later fits better into what blue wants to do. I'll be looking closely at this, and everything else awesome, coming with Amonkhet.

Amonkhet is full of interesting wrinkles, and a full update will come after I can actually play with them. For now, I'm tickled by the idea of fun with the following commons.

Kneel down before the Sacred Cat. Gaining 2 life plus preventing more damage by chump blocking twice makes this a little more exciting than I originally saw at a glance.

Supply Caravan makes a token if we have a creature tapped. It's usually not a problem for white decks, but that rider is a significant point to consider first. However, a token with vigilance is pretty rare, which is a great bonus.

Tah-Crop Elite is a repeatable, albeit slow, Glorious Anthem on the attack effect. Seeing it coming significantly diminishes the power of wide pump effects for tokens, but if you have a ton of tokens in play your opponent expects the pump spell anyway. Seems fine to get a bonus boost for "free".

Scribe of the Mindful

I'm not happy about having to sacrifice Scribe of the Mindful, but having control over when to get back a spell, as well as being a Gray Ogre, gives me some pause here.

Trading a scry two before drawing in order to have a three mana Shock in black probably isn't worth it, but Painful Lesson is still a solid contender for Pauper cubes.

Cartouche of Strength is a fight effect that pumps your creature too. It's not cheap like Prey Upon, but Green wants ways to make its creatures matter and this is another solid fight card to add to the mix.

I'm excited to see Amonkhet Limited drop early, which should help push up the update next time. See you then!