When a new wave of Harpie Lady support was announced for Legendary Duelists: Sisters of the Rose, you could almost taste the excitement.

Harpies are the first real, cohesive archetype in this game. They may not be the oldest deck theme, because Dark Magician and Blue-Eyes White Dragon got lots of retroactive legacy support years after the individual cards were printed. But way back in the Metal Raiders booster set, Harpies started getting cards that worked specifically with one another and at the time that was pretty unprecedented.

Has the First Theme OF Yu-Gi-Oh ever spent time at the top of the competitive scene? Well, kinda… but not really. Harpies have popped up in a handful of Top Cut lists dating back to 2013, but they never achieved the success you'd associate with true Top Cut decks.

Basically, if there aren't mobs of people calling for cards to be banned, is a deck really even good? 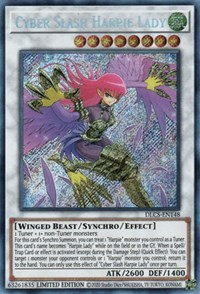 How To Play… All The Kinds Of Harpies?!?!

Kelly wrote a How To Play Guide back in May that used a healthy mix of old and new Harpie cards. Remember that support from Sisters of the Rose? We got five new cards in that release, but the problem is that the new stuff spun Harpies in a direction no one really wanted; it pivoted the theme off of high-Level Harpies, specifically abandoning Harpie Lady Sisters.

It reminds me of when Red-Eyes Black Dragon dipped into Rituals and Equips Spells.

To unlock the potential of some of the best Harpie cards, you'll need to play Harpie Lady Sisters or somehow boost the Level of your Harpies – stuff like Harpie Perfumer and Harpie's Feather Rest. Thankfully, Harpie Channeler turns into a Level 7 monster when you control a Dragon, but now that's not the only way to get Level 5 or higher Harpies anymore!

Thanks to Dragons of Legend: The Complete Series, you no longer have to play four-dimensional upside-down underwater chess to get a high-Level Harpie on the table. When I wrote on Dragons of Legend, Cyber Slash Harpie Lady made the Number 2 spot hands down, only beaten out by Toon Kingdom. For context, Toon Kingdom in Dragons of Legend is like Crystal Bond in Legendary Duelists: it'll beat out just about anything else on a Top 10 list.

I was way hyped about Cyber Slash Harpie Lady, and you should have been as well.

But back to the Main Deck, Harpie Channeler is the core card of the strategy regardless of how you build it. There's no reason not to run three copies, because it quite literally makes the theme playable. And regardless of how much you want to lean into the Level 5 and higher Harpie approach, Cyber Slash Harpie Lady a modern necessity as well. 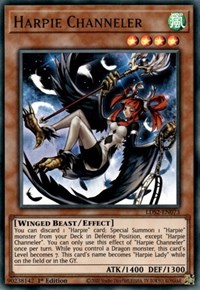 While they didn't start off as such, Harpies and Rank 4s are now synonymous. Harpie Channeler pitches a Harpie card for a cheap Link or Xyz Summon, and it's really the only starter card the theme has besides Harpie Perfumer. To help with that, you'll need more extenders to keep your momentum going or produce some reasonable end board, right?

Harpies excel by going second, because they have so many cards that disrupt your opponent's plays: cards like Ice Beast Zerofyne, Lightning Chidori, Evilswarm Exciton Knight, Draco Masters of the Tenyi, Harpies' Hunting Ground, and Tornado Dragon.

Adding in more copies of Unexpected Dai and Elegant Egotist helps you field multiple Level 4 Harpies and leverage one or more of the above cards. It's a bit rustic, but it's straightforward and gives you a bunch of options.

Too many spells and traps in the way? Blow them up with Harpies' Hunting Ground and Tornado Dragon. Need to blast away multiple threats at the same time? Good thing Harpie Lady a non-Effect monster, because Draco Masters of the Tenyi gets you there. How about blanket negation and a big monster? Ice Beast Zerofyne the perfect answer. Here's what the deck ended up looking like.

Barrier Statue of the Stormwinds

What About Going First?

Of all the Harpie-centric options you have for going first, the most basic in-house combo involves the new Synchro, Cyber Slash Harpie Lady. Or to be mor fair, the combo is Cyber Slash Harpie Lady. Bouncing a monster your opponent controls at the right time can sabotage their entire strategy, but it's 2020 and we're talking about modern competitive Yu-Gi-Oh: one counter isn't going to cut it.

While there are endless combos you could play for, I think cutting it down to the fundamentals is the best option for Harpies because of Harpie's Feather Storm. The card seems insanely overpowered because it kinda is - as long as you have a Wind Winged-Beast monster, all of your opponent's monster effects are negated for the rest of the turn.

I'd say getting to Harpie's Feather Storm a high priority going first.

There aren't a ton of ways to search Harpie's Feather Storm, but using two of them is pretty important. Even if it means setting Hysteric Sign, activating Harpies' Hunting Ground, and using your Normal Summon on Harpie Lady to destroy your set Hysteric Sign, it's worth it. During the End Phase you'll search two Harpie cards and Harpie's Feather Storm, hopefully stalling your opponent enough so you can do something on your second turn.

As much as I hate it, Trap Trick is a necessary evil here. I want this deck to be competitively viable and no, I'm not playing A Cat of Ill Omen and Lilith, Lady of Lament. 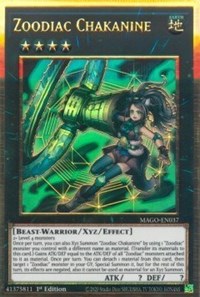 Ok, Fine, Combo Time, You Asked For It

I'd be remiss in my duties if I didn't include a some strong core combos. As awesome as Harpies are, I understand if setting Trap Trick isn't what gets you out of bed in the morning. Perhaps it's a bit long winded, but with the ability to field lots of Harpie monsters, this combo is only convoluted in name. And even if you don't love it and want to make some tweaks, I'd keep Unexpected Dai and multiple copies of Elegant Egotist in the deck for sure.

Now your Barrier Statue of the Stormwinds is obviously protected from Special Summons, but your Simorgh, Bird of Sovereignty also stops it from being targeted. Zoodiac Drident is there to pop any Normal Summon your opponent might have to run over your monsters, and Cyber Dragon Infinity stops whatever rogue card your opponent might throw at you.

Back it up with a Harpie's Feather Storm, and it's virtually impenetrable. 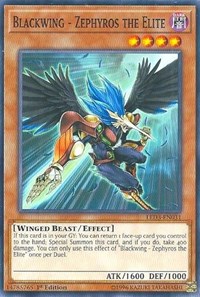 Technically, the Zoodiac aspect of that combo is contingent on your having a card to bounce back with Blackwing - Zephyros the Elite, but with the highly searchable Hysteric Sign, Harpies' Hunting Ground, and Alluring Mirror Split, you have a good chance of hitting all the notes in that combo.

Keep in mind, you can take your Harpie deck in a bunch of different directions. I wanted to play Harpie Oracle with Cyber Slash Harpie Lady, but the above combo stuffs the deck quite full as-is. Besides, if you add Harpie Oracle then you'd want to add Harpie Lady Elegance for its second effect, and then… that's a rabbit trail I can't afford to go down.