It's rare that after a format has been "solved" we see a mostly new deck do well at a big tournament. This past weekend at the Online Players Tour was the exception. Let's go back in time and walk through how I ended up arriving at this deck decision. 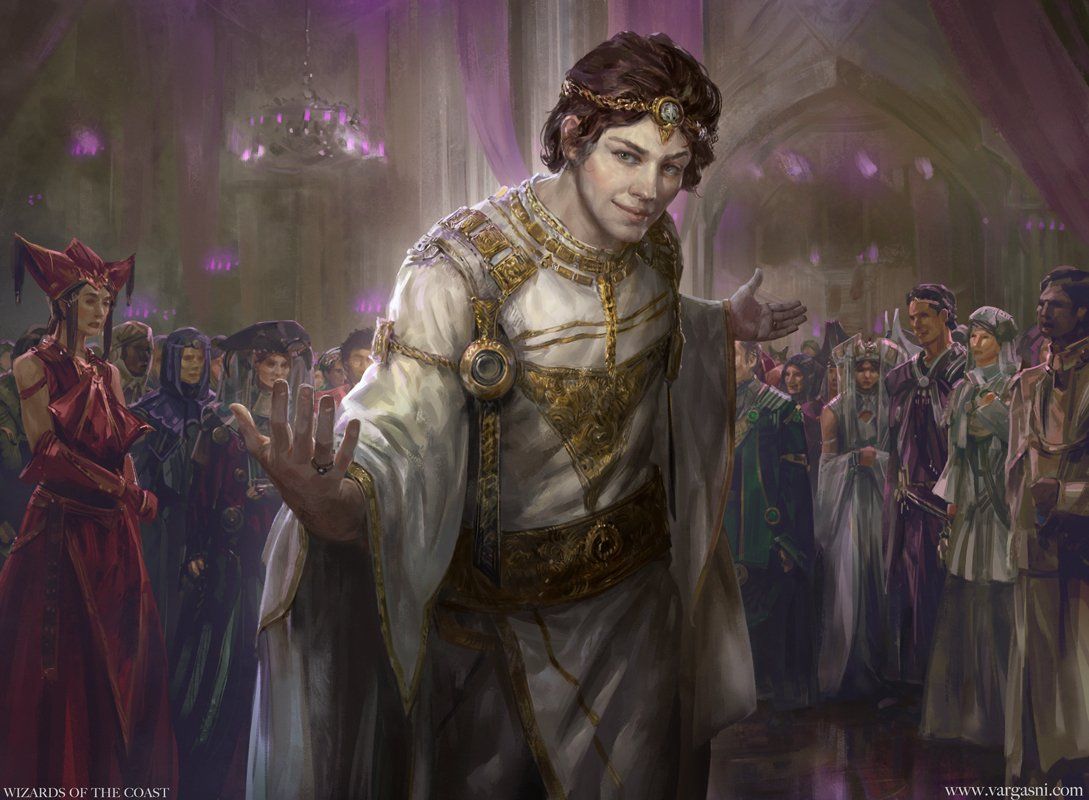 It's less than 24 hours before deck submission for the Players Tour. I am "locked in" on Temur Reclamation. My list feels really strong, and I have been playing the deck for many weeks, so I feel like I can pilot it very well. In the back of my mind though, I realize that Temur Reclamation is the deck that everyone else is gunning for. That's not the worst thing in the world, but I prefer to target the best deck rather than play it a lot of the time.

In my head, the metagame is going to be Bant Ramp and Temur Reclamation, followed by Rakdos Sacrifice. (I am correct.) I decide to message a couple friends to see what they are playing the night before submitting my decklist. I expect to persuade them to jump on board the Reclamation train, so I start talking to Eric Froehlich and Brad Nelson. This is where the Temur Reclamation train starts going off the track.

They tell me they want to play White-Black Yorion. I can hardly believe what they are saying. I knew that people are a bit off Magic, but to throw away a tournament on Orzhov Yorion seems a little crazy to me. Once I realized they are serious and have actually been testing the deck for a few days, and doing well, I know we have to play some games. We play, and the deck absolutely crushes Bant, while feeling close against Temur Reclamation.

The results aren't overwhelmingly positive, but they are good enough to make it feel like a real decision whether to play Orzhov Yorion or Temur Reclamation. I don't have time to play the deck much before deciding what list to submit. Then I hear that Ben Stark has also been testing the deck. Ben says he thinks the deck is absolutely busted. Whether it's the results against Bant, wanting to play a deck that is totally under the radar, or just wanting to have fun, I end up going with White-Black Yorion. I feel a little more comfortable knowing that other great players have also chosen the deck.

Everyone plays the same list, other than the Triomes:

We go back and forth on a couple card choices, though most of it is just theory. For instance, we cut Basilica Bell-Haunt and add Elspeth, Sun's Nemesis. The theory is we want a more proactive four-mana play, and don't expect as many small creature decks. Basilica Bell-Haunt is certainly better vs. Mono-Red, but we prefer Elspeth, Sun's Nemesis against the green midrange strategies. I'm able to get in a handful of matches before the event, but honestly my confidence isn't particularly high. It's only after the Players Tour starts that I feel like the deck is actually good.

I end up going on from here to rattle off an 8-1 record on day one, putting me in a great spot going into the second day. We all think we made a great metagame call, since Bant Ramp is the most popular deck in the tournament. I personally have a 6-0 record against it. Unfortunately, I get some rough pairings on day 2 coupled with some bad luck, and amazing topdecks from my opponents. This leaves me just outside the Top 8, finishing in 10th place.

Luckily we are able to put one copy of Orzhov Yorion into Top 8, in the hands of Ben Stark, to make our group feel validated in our decision to play the deck.

Let's get into what the deck is trying to actually do.

This is the most discard-dense deck I have ever played. We have 12 maindeck discard spells, and four more in the sideboard. That isn't counting Doom Foretold. The idea is to force the opponent to topdeck to win, and strip them of precious resources. Since there is so much hand disruption it often means the opponent is forced to play into removal like Elspeth Conquers Death. One of the signature cards in the Orzhov color pair is Doom Foretold. The card is very good if you have permanents lying around that you don't mind sacrificing. In this case, we are playing plenty of expendible permanents. In fact, some of our cards we want to sacrifice in some cases. This wouldn't be a deck without Treacherous Blessing. This card ties the deck together, and allows us to gain card advantage on the opponent. This is a great example of a card that we don't mind sacrificing to Doom Foretold, but if given the opportunity we are of course going to flicker it with Yorion, Sky Nomad. You do have to be carefulI know firsthand that you can die from these triggers. Still, there is enough life gain that it doesn't usually happen.

Most of the recent complaints regarding companions are that they aren't being used after the latest rules change. Well, we are definitely using Yorion, Sky Nomad to great effect here. Not only is Yorion our companion, but we also have three more copies in the main. Our primary way to win most games involves casting Yorion, Sky Nomad. We want to have as many permanents in our deck that have enters-the-battlefield effects as possible. Charming Prince plus Yorion lets you continually flicker Yorion in and out of play. That is pretty insane, as some decks simply can't interact with it.

Let's go over some important matchups, keeping in mind things may change a bit after the release of Core Set 2021.

This is a challenging, but winnable matchup. Their card advantage and countermagic give them the edge game one, so you want to be able to pivot after sideboarding. We are bringing in a full 10 cards, the most of any matchup.

After the Glass Casket and Oath of Kaya, finding what to take out is a bit tricky. I have been doing some shaving, but trying to keep the core of the deck intact. With the additional discard in Duress, and the additional removal for Wilderness Reclamation and Nightpack Ambusher in Despark, the game plan is much more likely to work.

However, we can simply go on a Rotting Regisaur beatdown plan as well. We aren't the same sort of Regisaur-based strategy as some other decks playing it, but if we can pair it with discard, especially on the play, it definitely has a good shot of going all the way.

I love playing this matchup. Once you get Charming Prince plus Yorion, Sky Nomad going, there is very little they can do. The games usually go long enough that you have time to set up this combo. There have been some differing opinions on Glass Casket in this matchup, but I really like it. Being able to flicker it out later (after, say, eating a Hydroid Krasis) definitely comes up.

Despark sometimes comes in depending on the build. If they have lots of planeswalkers like Nissa, Who Shakes the World and Tamiyo, Collector of Tales you definitely want them as well. Taking out Elspeth, Sun's Nemesis is always fine because it isn't super important to the Yorion, Sky Nomad game plan.

The Bant deck tries to out-grind you with card advantage, but it really doesn't work. Always play around what you can, and try to aggressively attack their hand. Kaya, Orzhov Usurper and Glass Casket can deal with Uro, Titan of Nature's Wrath and Shark Typhoon.

This is the matchup that ended up knocking me out in the final round of the Players Tour, but the games can be very swingy. Kaya, Orzhov Usurper is amazing against this deck, it even deals with the food tokens. Bolas's Citadel can completely swing the game, and it's tough to play around your opponent topdecking it in a close game. Overall, I do think the matchup is very close.

We aren't sideboarding very much here. I'm not actually super confident in the Kaya's Wrath, but they can be a nice way to claw back in after your opponent has a good aggressive start. In the end I'm sideboarding them in. The games usually come down to trying to line up your removal and discard properly against their threats.

I love playing against aggro decks of all varieties with this deck. We have such a high density of removal and life gain, it's really tough for the aggressive decks to get too many threats in play at once. Oath of Kaya is one of the best cards in these matchups. I didn't drop any matches to aggro decks this past weekend.

You will need to vary a little bit based on lists to find what you want to be doing here. Against Mono-Green for instance, I have been bringing in a couple of Rotting Regisaur on the draw as well, and they should likely come in against Mono-Red Aggro as well. However, against Rakdos Sacrifice Rotting Regisaur is dangerous because of Claim the Firstborn. If you do bring in Regisaur you probably need to take out Elspeth, Sun's Nemesis.

I'm not a true expert with the deck, which is why this is the full extent of the sideboard guide I'm comfortable with providing today. I'm looking forward to seeing if this deck has what it takes to stay a factor in the metagame for many months to come. After playing it, I think we will see plenty more of it moving forward.

Thanks to everyone who helped me with this deck. It really did come together in the end, despite me initially calling it "unplayable garbage."