Speed Dueling's an alternate play format that uses a custom card pool and a special set of rules.

Duels are faster–as the name suggests–and it's a much more accessible format for players who are new to the game. It's also a breath of fresh air for veterans who feel fatigued by five-minute first turn combos and the 'break my board' gameplay of modern Yu-Gi-Oh.

Speed Duels are worth checking out even if you're a consistent tournament-goer, especially because it looks like Konami's support for the format is ramping up, and you can use Speed Dueling to help introduce new players, friends, or family to the game.

How Speed Duels Are Different From Master Duels

There are a few key differences between Speed Duels and the more popular Master Duel ruleset. If you've played Yu-Gi-Oh! Duel Links you'll already have a good grasp of the changes, but let's quickly cover them.

You'll find that most aspects of Master Duels, including minimum deck size, Life Point totals, and the number of zones on the field are reduced in an effort to simplify the game. Deck sizes are limited between 20 and 30 cards, Life Points start at 4000, and there are just three columns on the field for monsters, spells, and traps. Speed Duels also drop Main Phase 2, limit the Extra Deck to five Fusion monsters, and both players begin the duel with four cards in their hand.

The last major difference between Speed Duels and Master Duels is the addition of Skill Cards, which are set face-down at the start of the duel and are flipped face-up when their conditions are met. Skill Cards are similar to their Duel Link counterparts and feature effects that are worth building your deck around.

Speed Duels play out pretty much identically to Master Duels outside of those changes. Keep in mind that only cards with the Speed Duel watermark can be used in Speed Duels, but you can take your Speed Duel cards and use them in your Master Duels deck (aside from Skill Cards).

I've made the argument before that Speed Duels are ideal for teaching new players because there's rarely an overarching strategy that requires full knowledge of all fifty-five cards between the Main and Extra Deck. Regular Master Duels are completely overwhelming for someone who hasn't played the game before, but Speed Duels cut through the bloat and simplify Yu-Gi-Oh to its base gameplay: summoning monsters, boosting ATK and destroying cards with spells, and defending yourself with traps.

It's easy to get a handle on the gameplay differences between Speed Duels and Master Duels, but there isn't a clear path towards getting into Speed Duels in the first place. Speed Duel products are often hard to find, and it's not obvious where you should start investing if you're serious about playing Speed Duels competitively, or even if you simply want to play Speed Duels with your friends. 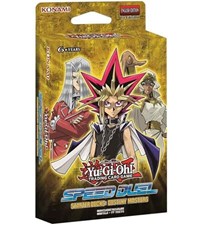 How To Get Started

The best way to start playing Speed Duels is to pick up one of the Speed Duel Starter Deck products. Starter decks for Speed Duels come with two or three decks each, plus Skill Cards that complement each strategy. Buying booster packs first might leave you without a useful Skill Card you'll want, although you can certainly pick up singles to custom-build a strategy right out of the gate.

There are currently just four booster packs for Speed Duels with fifty cards each, including five Skill Cards. Meanwhile, there are five starter deck releases with a total of twelve 20-to-30-card decks between them. And finally, product-hover id="220429" comes with over 200 cards, and it's designed to support up to eight duelists.

There aren't many Speed Duel releases to choose from, but each has its own unique set of offerings and are suited to particular tasks. If you're trying to get friends or family into the game then I'd recommend picking up a starter deck, especially if there's one that features their favorite character from the original anime. Speed Duel Starter Deck: Destiny Masters and Speed Duel Starter Deck: Duelists of Tomorrow come with three decks each, so you're not stuck playing the same match-up each and every game. 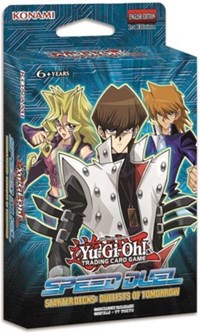 The Battle City Box is another option for helping friends get into Yu-Gi-Oh, and it's a fantastic way to create a draft tournament using the 200 static cards in the set. You can find other ways to semi-randomly distribute cards to players so that everyone's building a new deck each time you play.

Typically you'll give each player a stack of nine cards, and they'll choose one card from each stack and pass the rest around the table. Each player will pick up nine cards per 'round' of drafting and eventually complete their deck by the end of the third round. After you've played a tournament once you can simply distribute random cards to players however you choose, but I'd recommend giving each player a Skill Card first so they have a base to build around.

If you want to get into competitive Speed Duel constructed play then booster packs are your best bet for picking up must-have Speed Duel staples. But a lot of the game's best cards are in the starters, so I'd recommend giving them a careful look first. Beyond that, the Speed Duel: Battle City Box has a huge collection of new cards that are guaranteed in each box. It also contains the Egyptian God Cards, which are incredibly powerful if you can summon them. There are very few ways to deal with Obelisk the Tormentor in the Speed Duel format. 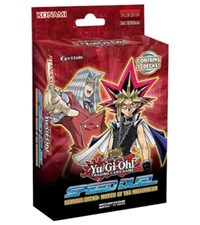 Constructed Speed Duel play was largely uncharted territory, since most competition is limited to small, specialized communities online. But Remote Duel Yu-Gi-Oh! Extravaganzas changed that a bit, thanks to Speed Duel Win-A-Mat tournaments. Now, diving into competitive Speed Dueling is as easy as checking out the event deck archive here on Infinite, and getting a feel for what you want to play.

But if you're not looking to netdeck right off the bat though, and you want to prepare for a Speed Duel tournament, you'll probably want to start by looking at what the Starter Decks have to offer. The strategy of 'buy three Structure or Starter Decks' works just as well in Speed Duels as it does in Master Duels, but you'll get even more fully fleshed-out decks in the end. Starter Decks also feature variant cards that are worth chasing for their popularity in Master Duels, like Advanced Ritual Art and D.D. Crow.

I'm a big fan of the Yami Yugi and Pegasus-themed decks that were released earlier this year, Speed Duel Starter Decks: Match of the Millennium. Yami Yugi's new Knight of Legend Skill Card lets you Normal Summon Gaia the Fierce Knight without tributing, and gives it piercing damage. There's more: if Gaia the Fierce Knight does damage with that effect you'll get to draw two cards and discard one, which is a huge boost to your ability to find your best cards. Yugi's deck also comes with Charging Gaia the Fierce Knight, plus a handful of other excellent support cards like Summoner's Art, Spell Shattering Arrow, and Magician of Faith.

The competitive scene in Speed Duels isn't rigidly defined by regular sanctioned tournaments, so it's hard to recommend any specific tech cards. Floodgate Trap Hole from last year's Speed Duel: Trials of the Kingdom is extremely powerful in a format where there's only three Monster Zones to work with, and it pairs nicely with Knights of Legend to set up piercing damage with Gaia the Fierce Knight–assuming, of course, that you don't already control a copy of Gaia the Fierce Knight. Dust Tornado among the best backrow removal tools in Speed Duels, and it's also available in Speed Duel Starter Decks: Match of the Millennium. Speed Duel: Trials of the Kingdom remains the most recent booster pack for Speed Duels despite having been released last year. 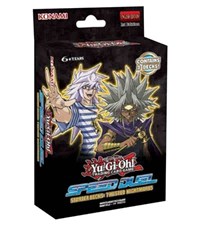 I think the best purchase for anyone looking to seriously get into Speed Duels is the Speed Duel: Battle City Box. It's absolutely loaded with plenty of must-have Speed Duel cards, like Jinzo, Book of Moon, Breaker the Magical Warrior and more. Jinzo a particularly excellent addition to a certain strategy that keeps you from playing set cards…yes, Yami Yugi's Gaia strategy.

For now your best bet at collecting tech cards is to look at the other starters. Speed Duel Starter Decks: Twisted Nightmares contains Allure of Darkness, Lava Golem, and Dark Ruler Ha Des, which currently has the highest ATK of any Level 6 monster in Speed Duels. If you're going for a full Advanced Ritual Art build with a large Normal Monster line-up then you'll probably want to pick up Heat Wave from Speed Duel Starter Decks: Ultimate Predators. These starters also have White Elephant's Gift and Dark Factory of Mass Production for even more Normal Monster synergy.

The lack of a Speed Duel metagame is a huge selling point for the format. It's not nearly as competitive as Master Duels by design, but there's still a good amount of skilled play involved for those seeking a different kind of competitive Yu-Gi-Oh. Of course, you can simply play Speed Duels out of the box if you'd like.

Speed Duels remain one of the best ways to teach players the game, or to introduce someone to the world of TCGs if they've never touched trading card games before. It's one of the greatest learning tools Konami's put out in recent memory, and it's only going to become more popular amongst long-time duelfans when the Battle City Box launches next month.