Sometimes I'll see a new theme and know exactly what to do with it - the deck building just goes zero to sixty. Other times… well… yeah. I had to read the War Rock cards a dozen times before I realized everything they didn't do.

I'm really struggling to come up with any World Premiere cards that I haven't liked right off the bat. In fact, I've wanted more cards for virtually every World Premiere theme that's ever existed, and that includes Burning Abyss. Seriously. I said what I said. I might concede that Noble Knights have too many cards, but that's only in relation to other support-starved decks. So my early struggle with War Rocks was a weird experience.

At a bare minimum, War Rocks look cooler than just about every other theme in the game. But as it turns out, this deck's more than just a pretty face. With the right off-theme support there are some really cool plays here. 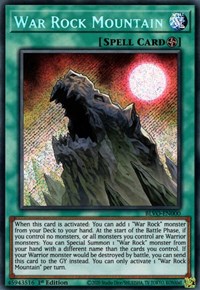 When Megaliths were released it felt like I was transported back to the early 2010s. Their effects are certainly neat, but the heavy investments they require made them look a little dated. By the same token, War Rocks remind me of an era long, long gone. Sure, War Rock Fortia searching War Rock Bashileos sounds cool, but Pyramid Turtle been doing the same bit with Ryu Kokki longer than some duelists have been alive.

What War Rocks do have is a group of surprisingly powerful cards that work well in mash-up decks. A pure War Rock deck would requires you to run a lot of stun cards, stuff that cuts your opponent off from taking certain actions, but I'm probably not going to win you over with Pot of Duality and Soul Drain, right?

War Rock Mountain and War Rock Skyler are the two best War Rock cards by far, and yes, I'm saying they're better than War Rock Fortia. Why? Because they let you deal tons of damage, especially when you combine them with other cards.

I'll be honest, I didn't know what to do with War Rocks until I paired them with Kaiki the Unity Star, and that's what really brought together today's build.

I think your next best plan would be to wait around and wait for War Rock Gactos to die so it can summon War Rock Bashileos, but I'm a little more forward thinking than that. 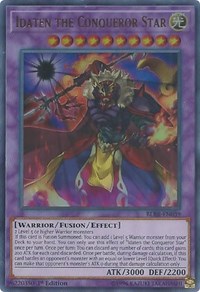 Wait, This Is A Fusion Deck?

Not… 100%. But yeah, some of the best cards in this deck are Fusion Monsters. It's hard to swarm the field with multiple War Rocks at once, but they're actually quite good as Fusion fodder for one very underplayed card - Idaten the Conqueror Star.

Idaten the Conqueror Star might seem like a weird choice, but more than half of the War Rock monsters can serve as Fusion materials for it, so it's not such a weird idea. And since its effect lends it to fast, big, consistent damage, it's a natural fit for what I want to accomplish here. After all, who doesn't love surprise OTKs? 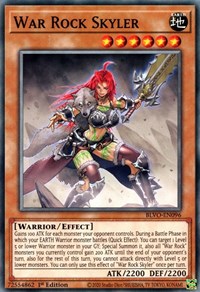 With a bit of help, of course. 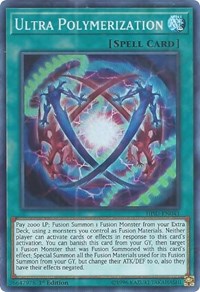 The most frustrating part about War Rocks is their lack of amazing Normal Summons. Yes, I can hear you say, "But War Rock Fortia searches cards!" That's swell and all, but sincec you can't use that card during the Battle Phase, I wanted something better than "Normal Summon War Rock Fortia, attack, search a "meh" card, cry hopelessly, and end your turn."

War Rock Mountain only summons at the beginning of the Battle Phase, so you need more ccarsd that can work outside of that small window of opportunity.

That's not the most revolutionary idea ever, but it's 4600 damage right to the face and it loads your backrow with two negates. If you search regular Polymerization instead, you can make Idaten the Conqueror Star and have War Rock Mountain live to summon the last bit of damage you need from your hand for a real OTK. Laugh now, but you'll hit exactly 8000 with Idaten's discarding effect. 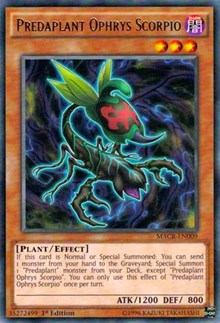 Are the Predaplants crucial to the War Rock strategy? Not necessarily, but at the cost of your Normal Summon and a monster to discard, you'll put yourself miles ahead of just summoning War Rock Fortia.

I mean, my other idea was Deep Sea Diva, but that put about 19 cards into the deck you didn't want to draw. 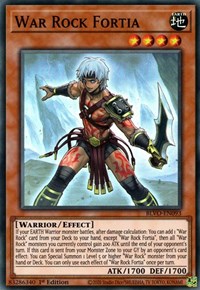 The Problem With Isolde

There are some decks that can skate by without relying on their Normal Summon. My Blue-Eyes deck can manage, and even builds like my Fabled deck work well without it. If you're familiar with Dragon Link and Eldlich, then you know what I mean; some of the most competitive decks in the game got to the top of the heap largely because they don't rely on their one Normal per turn.

I don't mean to beat a dead horse, but if you use your Normal Summon on a War Rock monster, you kinda just go to the Battle Phase and use War Rock Mountain. And yeah, they're all Warriors. You could always combo with War Rock Fortia and a Warrior to make Isolde, Two Tales of the Noble Knights, but why would you, really? That card's done some amazing things in a variety of decks in the past, but it's just not much help in this one.

Most combo cards work because they garner more in card economy than a single card could hope to. Exhibit A, Isolde, Two Tales of the Noble Knights. You make her with a single card, and bam, you'll profit by several more cards before the turn is over. Combine Isolde, Two Tales of the Noble Knights with Gouki or something similar, and suddenly you can have seven or more cards in hand even as you build your field.

But as awesome as it is to get more cards, War Rocks don't benefit from Isolde, Two Tales of the Noble Knights. The card you search with Isolde won't be useful, and if you want to summon a monster you'll have to cram your deck full of Equip Spells you don't need. You get extra cards… but how exactly does that help War Rock?

Unless you can field War Rock Skyler or War Rock Fortia, what exactly did you accomplish? The answer's probably "cool things," but did any of those "cool things" involve War Rock cards? No? I thought not.

At the end of the day, I just want to dunk on my opponents with Idaten the Conqueror Star, Predaplant Chimerafflesia, and War Rock Skyler, and this version of the deck wound up doing that the best.

Trishula, the Dragon of Icy Imprisonment

King of the Swamp

I don't know how else to say this, but there are some War Rock cards I just never really want to draw. War Rock Orpis isn't exactly a great card, but combined with War Rock Skyler and War Rock Mountnain, it can help in creating near-lethal plays.

War Rock Gactos is in the same boat. Against an open field, sure, it's damage, but its best use is very niche. If you're forced to go first, you want to have another option besides the wombo-combo stuff: your best option is Number 41: Bagooska the Terribly Tired Tapir.

What, were you expecting something else?

All that said, you'll find some ridiculously strange interactions that happen to work out really well as you play the deck. Some of the weirdest Fusions come in handy more often than you'd think, mostly thanks to Kaiki the Unity Star.

For example, Predaplant Dragostapelia and Trishula, the Dragon of Icy Imprisonment aren't typically at the top of your list of Fusions, but they're the easiest monsters to summon from a Battle Phase Kaiki the Unity Star brought back via War Rock Skyler. Idaten the Conqueror Star and The Phantom Knights of Rusty Bardiche do to most of the heavy lifting generating damage, but that extra damage from your stalwart Fusions come in clutch. 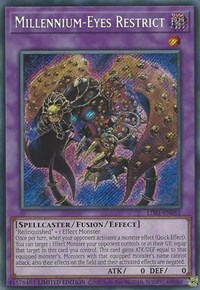 Magicalized Fusion is by far my favorite card in this deck, because it sets up a pretty good backup play for your opening turn. Millennium-Eyes Restrict almost never gets used, but it turns out Predaplant Verte Anaconda can copy Magicalized Fusion, and this already runs King of the Swamp as added Polymerization support.

The confused look on your opponent's face when you say you're playing War Rock and finish your opening turn with Predaplant Chimerafflesia, Millennium-Eyes Restrict, and multiple Phantom Knights' Fog Blade is worth the effort.