If you're stuck in your house for a few days and really want to learn about card lore, maybe I can persuade you to check out some clips of the German opera Der Freischutz. Why? Well, that opera was what inspired the Magical Musketeers and the names of all their monsters. If you're curious you should be able to find clips and maybe even full recordings on Youtube, but I can neither confirm nor deny if I'm listening to it in the background while I'm writing this right now. If clips aren't available in your country let me at least give you the gist: don't make a deal with the devil for magical bullets that the devil himself controls.

Thankfully, the Magical Musketeers are all pretty straightforward; you don't need to know German opera to understand the deck's playstyle. The monsters themselves all let you play on-theme spells and traps straight from your hand on either player's turn, and each of those cards has an added bonus whenever you play it in a Magical Musketeer's column. They'll get you card advantage, fetch cards from your graveyard, and even summon new monsters at no cost!

Why is that mechanic so good? Well, there's no great way for your opponent to counter it outside of just removing the Magical Musketeer from the field before stuff starts up. Since the Magical Musketeers don't need to set any traps or quick-play spells, Lightning Storm and Twin Twisters are largely useless and your opponent never really knows how many responses you have in your hand; it's a total mystery, and that makes you very difficult to approach.

Building the deck'll run you more than a few pennies, but only a handful cards in the actual Musketeer core command more than chump change on the secondary market. And with Duel Overload making Magical Musketeer Caspar and Magical Musketeer Starfire so cheap, assembling the core's about as affordable as grabbing a few Structure Decks. Nick Burgess got Top 8 at a Regional Qualifier a couple weeks ago with the build below, and it gives you a good idea of which Magical Musket cards are must-haves for your own version.

Remember how I said the deck was cheap? I meant the theme core specifically, not the add-ons that so often find their way to the Main and Extra Deck. If you're really excited about the strategy, don't let Evenly Matched get you down – you can play this deck without it!

It's like Pot of Extravagance now or Pot of Desires in 2017. The deck can still function without the pricy tech cards, so don't let them be a barrier to your new favorite deck. We probably won't be going to tournaments for a few weeks anyways, so now's a great time to get familiar with a new theme even without the high-value splashables.

It's Like Pinball Wizard, But With The Devil
Feel free to branch out from Burgess' list, but there are definitely some non-negotiable monsters when it comes to building Magical Musketeers.

Magical Musketeer Caspar, the Magical Musket replacing monster, and Magical Musketeer Starfire are your biggest stars, providing the necessary fuel to keep you from running out of cards. If you remember back when dinosaurs ruled the earth and rainbows were in black and white, Magical Musketeers operate on a principle that's similar to the one that led Gadgets to domination in their heyday.

As long as you had more Sakuretsu Armors and Fissures than your opponent, your Red Gadget, Yellow Gadget, and Green Gadget would accrue damage very, very quickly by making direct attacks in a simplified game where your opponent just didn't have any cards. And if you flash forward to today, you can squint a bit and the decks look almost the same. 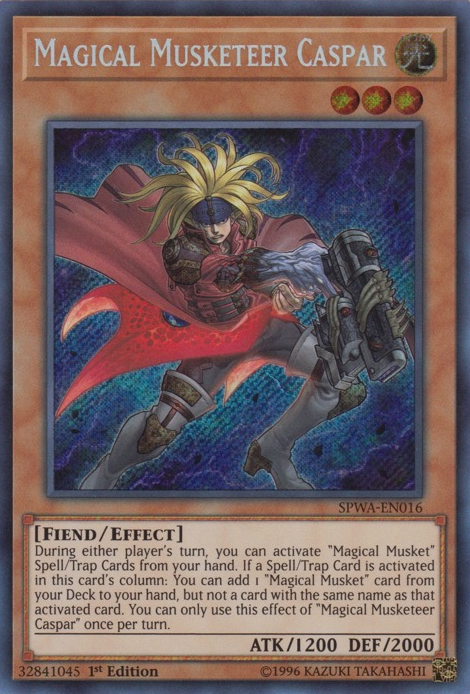 Magical Musket - Cross-Domination and Magical Musket - Desperado might be a big enough catalyst to start you out on the right foot. Should you aim to go first? Obviously against an FTK deck or a deck that's virtually guaranteed to setup an impossibly big board, going first is optimal. But all other things equal, going second should be your regular go-to. 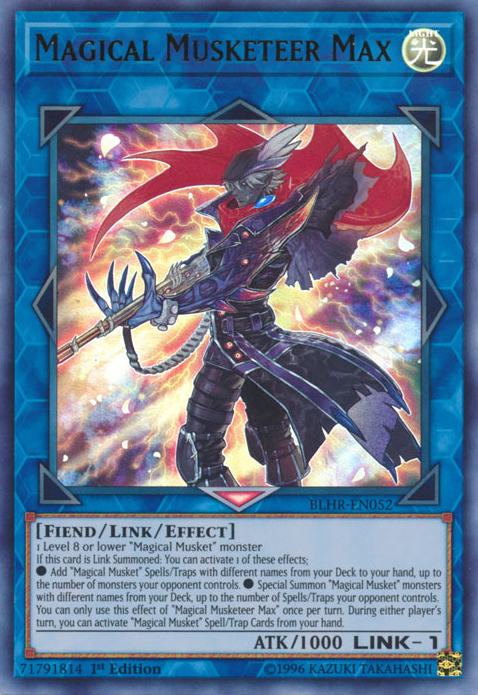 Beyond the obvious implications with Max, think back about my Gadget example - more cards means more 1-for-1 exchanges, so you'll eventually have a small army of Magical Musketeers cards while your opponent drops resources one by one. Adding more cards that directly facilitate that style of play is the reason the deck can succeed.

Pot of Desires, Cosmic Cyclone, Evenly Matched, Mind Control, Instant Fusion… Burgess built his deck to go second more often and stocked it with cards that either bait negation, trade resources in a 1-for-1 Parry, or exist for the sole purpose of increasing your card economy. It's a blunt strategy, but it's a time-tested approach that's as old as Yu-Gi-Oh! itself.

We Were On The Verge Of Greatness; We Were This Close
I'll sing Magical Musketeer's praises to high heaven but if you've been following along with me, you might have noticed two glaring weaknesses to the deck. The first should be pretty obvious if you're used to seeing hand traps everywhere.

Unlike the last time I featured Magical Musketeers with this deck list , Burgess declined to run any hand traps in his version – there's no Effect Veiler, no Droll & Lock Bird, not even Infinite Impermanence. If you play against one of those decks where their first turn takes 20 minutes and produces a field with 4+ negates, Magical Musketeers will have a hard time getting over it. Ideally Mind Control, Instant Fusion, Evenly Matched and other soft counters will float to the top of your deck and appear early, but that's banking on drawing unsearchable off-theme cards. That's always risky.

Second, any deck that runs Solemn Warning or instant spot removal is going to be a tough Mountain to climb. Paleozoic, Altergeists, and even Salamangreats can all nerf the Normal Summon of a Magical Musketeer and stop your turn right then and there. Again, it'd be swell to always have some way to ensure your Normal Summon happens, but it's not a guarantee.

Ironically the mirror match is relatively painful, because the almighty plan of going second can Backfire so easily. It's sort of like playing a game of chicken when it comes to who plays what card first, but what exactly can you do if your opponent opens with Magical Musketeer Caspar and Magical Musket - Desperado? Your Normal Summon will get shot down while your opponent reloads on another Magical Musket card. Variance becomes a big factor there and on some levels, it's impossible to mitigate. 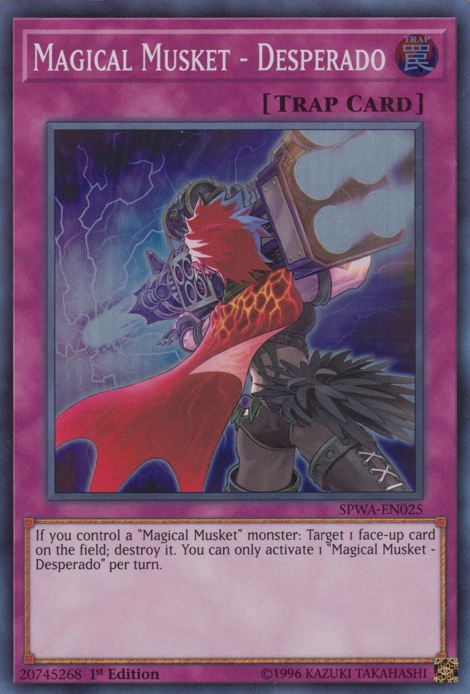 Will we see Magical Musketeers more often in competitive play? Yes: the format truly is the Wild West right now and we've seen lots of different decks punch their ticket to the Top 8 in various Regional Qualifiers. The introduction of Master Rule 5 April 1st will widen that field even more, and the reprints of Magical Musketeer Caspar and Magical Musketeer Starfire in Duel Overload make the deck that much easier to build. There's every reason to think the deck could gain more of a foothold, especially in this lull period where competition's on hiatus and people are more likely to try new strategies.

In the meantime, this is a deck that makes your opponents respect it, threatening them with a barrage of Magical Musket - Desperado and Magical - Musket Last Stand while they sit in the corner and cry. Magical Musketeers are no joke, and if you're looking for a new strategy to explore right now, give this one a shot.