Hey there! Today we're going to discuss something I'm hugely passionate about, and something I've been outspoken in my support for: remote duels.

Back in the Spring, we were all pretty unsure about the landscape of competitive play in 2020. We didn't even know if there would BE any competitive play for the rest of the year, and I probably wasn't the only one worried about how Konami would respond to the COVID-19 pandemic. That's when we were first introduced to "remote dueling," where two duelists square off like normal, only from their own homes via webcam.

To say remote dueling was met with mixed responses would be... an understatement. Though some duelists like yours truly were pumped to continue to play with real cards, a lot of the public reaction was less than happy. When Konami started up their own Discord server to try and organize remote duel play they were met with some scathing reviews, and the server was quickly taken down, assumedly so they could create a more effective plan to support players.

It was a rough start, but since then, some of us have figured it out and really come to love remote dueling. That said, many players haven't taken the plunge and given it a shot yet, so let's start with the big question. 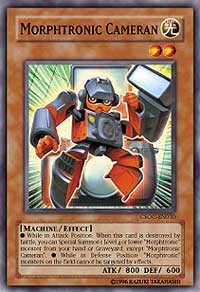 Why Should You Play Remote Duels?

Remote dueling may not have the same level of convenience as some of the unofficial, unsanctioned online platforms, but there are several benefits if you're willing to take the time to set everything up. First and foremost? You can play with your actual cards! That might seem like a small thing, but I for one haven't enjoyed watching players all run the same basic deck lists online, with no incentive to acquire those cards in real life. The online scene can feel really bland, competing with a bunch of faceless strangers all running the same Adamancipator Researcher and Eldlich the Golden Lord decks.

It's far more satisfying to sit down and have a casual game with your local friends via remote duels. Shuffling cards is cathartic for many of us, and remote dueling means you get to do that exact thing again – it just feels a lot more like Yu-Gi-Oh. There are certain aspects of the game that, try as they might, simulators can't replicate, and some of them are actually pretty important to competition and a complete game experience.

What am I talking about? It could be something as small as your opponent touching a card a few too many times, or checking their graveyard at a key moment; stuff that might clue you into something you would have missed otherwise. Perhaps the shaky tone of your opponent's voice indicates that they're bluffing, or it carries a confidence that suggests maybe they're not bluffing at all. Factors like those are subtle, but they're actually a huge part of playing Yu-Gi-Oh, and unfortunately simulators don't capture those aspects of the game.

There's also something to be said for the natural flow of conversation and gameplay that comes from actually talking to your opponent. It's far more enjoyable to hear your opponent laugh and be surprised by some zany play you make, than to see them type "eff" a few hundred times before silently quitting and moving on to the next impersonal game on the conveyor belt. It just feels better to play and interact with an actual human being: you get to see the playmat they likely have some connection with, the sleeves they use and the dice they roll, not to mention the cards they've carefully chosen for their deck. Your personality and self expression is central to the experience.

Finally, there's also the big point of official support. Currently, remote dueling's the only way to play for sanctioned prizes, and that's huge. I know that to me, one of the best parts of tournament play is getting to crack open packs that I've earned through hard-won games over the course of a tournament. Since local OTS locations can host tournaments via remote duel and offer real life prizes, it's at least a step toward some semblance of normalcy. Sometimes it's not even about the prizes, per se; I just wanna engage that serotonin slinging part of my brain that fires when I win some packs.

Setting It All Up

So, you've decided to bite the bullet and give remote dueling a shot. Awesome! But what do you need to get started?

Remote dueling's actually surprisingly low tech! I've seen some crazy sophisticated set-ups lately, especially over in the OCG. I think that guy's rig counts as a literal cage match. But all you'll really need is a computer to display your opponent's field, a smart phone or webcam to broadcast yours, and a simple goose-neck clamp or flexible arm mount to hold your device. You can find a mount almost anywhere you'd buy electronics, and Amazon's full of them.

From there you need to have access to Discord, and if you're using a cell phone, I'd recommend downloading Iriun Webcam, which turns your phone into a webcam. Your phone and computer will need to be running on the same wifi connection, and then you just need to set up your camera so your opponent can see your field, as if they're sitting across from you. Something like the photo below. 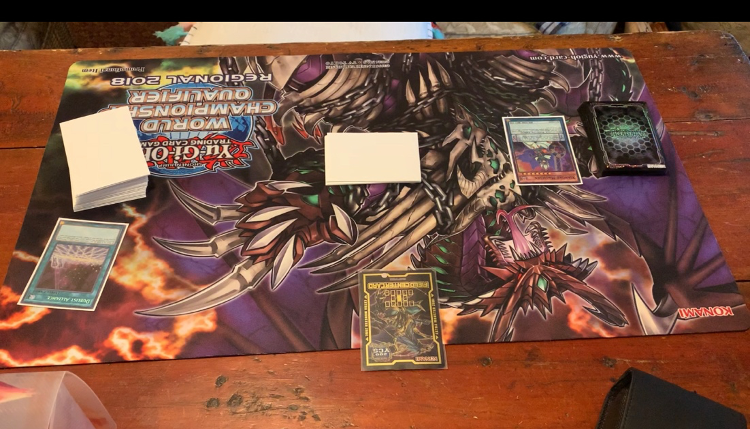 One very important note: you need to make sure to angle the camera so you can see your hand at all times, but without letting your opponent see the cards in your hand. Unless you're basically trying to duel Pegasus.

You also want to make sure you can clearly see all zones of gameplay, and that there's minimal glare. Helpful hint? Keep the lighting behind you. If you don't have a dedicated Yu-Gi-Oh desk, a kitchen table with a laptop works pretty well. There are also ways to use your TV or other devices, which are mentioned here courtesy of Konami. And even though it's not pictured, I'd highly recommend using a mat with the correct zones and field layout as well, just for clarity's sake. You might prefer to use mats without zones but they really come in handy for remote dueling. 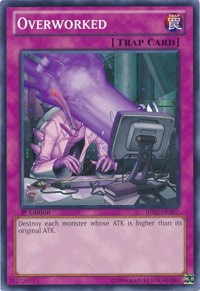 I've been doing this a bit longer than most, so I want to offer you a couple of pointers to save your sanity. Make sure your audio is set up well, so you and your opponent can both communicate clearly. Just like regular tournament play, communication's everything! You want to hear your opponent, and they want to hear you. With that in mind I'd also suggest that you announce all of your moves and compare life points regularly. Yu-Gi-Oh can be confusing in any case, and remote dueling can amplify that when you're starting out.

It might seem annoying to say, "Draw Phase, Standby Phase, Main Phase, ending Main phase," but it's a really good habit to get into regardless of whether you're playing in real life or online. Most seasoned players do this naturally after getting a certain amount of tournament experience under their belt, but it's always good to remind yourself that you need to communicate well at all times, especially when you're not sitting across from someone. If you're used to just sort of grunting and gesturing to your cards, know that some of those gestures are going to be tougher to see and more difficult to interpret online. Make sure to announce your summons and your plays, announcing when you're summoning a monster, activating a card, making a change to Life Points and so on.

Always give your opponent a chance to respond, and don't be afraid to repeat yourself if you're not positive they heard you. If you're responding to an effect or chaining a card, make sure to declare your action very specifically, including what you're responding to. It might seem silly, but saying "Chain Ash Blossom & Joyous Spring to Pot of Desires" is incredibly helpful, and you'll quickly get into a groove where you don't even really notice you're doing it. Bonus: when you play in real life tournaments that habit's going to be really useful, protecting the integrity of your games in bigger events.

It's also important to remember that lag and disconnects happen. Be sure that you pause gameplay any time that occurs so your opponent can fix the issue. There are actually some cool "Play" and "Pause" cards available here that you can print off to make sure you're being as clear as possible if you run into technical difficulties.

The final point I always advocate for is to write down Life Points! Especially when you're not playing in person, miscommunications can happen, so making sure you have a clear, written log will make it easier to ensure both players have an accurate understanding of the game state and can proceed accordingly. Again, this is a habit that will serve you well in real life competition too; judge calls are sometimes decided simply by who had a notepad and a complete record of the game, versus who had a calculator and no ability to recall the last twenty minutes.

If I've piqued your curiosity and you're ready to dive into remote dueling, Konami's got some more resources you should take a look at here. There are some more tips there for how to manage your set-up, as well as some more advice on communication. There's also info on some exclusive prizes, and that's definitely worth a look.

If you have any questions feel free to tweet me! I'll answer as many of your queries as possible during your set-up days and maybe if you ask nicely, I'll throw down with you with some wacky deck I'm working on for a future article. Until next time, (remotely) play on!