Two decks based around using Whip of Erebos to Reanimate Hornet Queen have recently generated a lot of buzz in Standard. Shahar Shenhar won the World Championship with a Sultai Reanimator strategy a couple weeks ago and various Abzan variants have since been popping up in Top 8s as well. Given the recent surge in popularity of this powerful strategy, today I would like to share with you how best to beat it. I'll talk about a few decks that have the tools to compete against these reanimator strategies as well as how to make other existing decks better against the strategy. In many cases it comes down to making a few small changes such as replacing a few maindeck or sideboard cards with Anafenza, the Foremost, Utter End, Reclamation Sage, Erase, Disdainful Stroke, or Hushwing Gryff.

If you're tired of losing to a bunch of Insect Tokens, today I'll show you how to stop it! 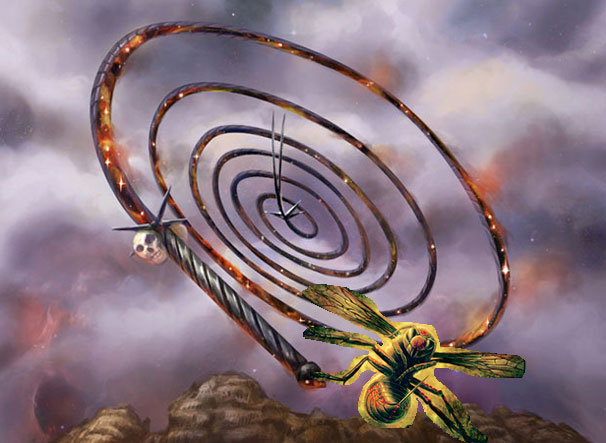 Let's start by examining the two enemies in question.Sultai Reanimator

Shahar's build with maindeck Ashiok, Nightmare Weaver has sort of become the norm for Sultai decks. It's great in the mirror and against the other midrange and control decks that comprise the majority of the format. It only has seven hard removal spells plus three Thoughtseize, so outside of its creatures it doesn't have a ton of disruption. It is also a bit slow when it doesn't open up on Sylvan Caryatid. This offers an opportunity for aggressive draws to get in a lot of damage while it sets up.

The gist of the deck is to play out a bunch of value creatures and to then play Whip of Erebos to start gaining back all the life it lost while setting up, in addition to rebuying any of its creatures that have died. Even though Hornet Queen and Doomwake Giant are probably the most important cards in the deck, I refer to the strategy as a Whip of Erebos strategy because the whip is the card that really changes the game in every matchup. Against control and midrange decks it is a value engine to rebuy all your creatures a second time, many of which have beneficial triggers when entering the battlefield. Against aggressive decks the Whip also acts as an important life gain engine to regain all the early life lost and to essentially close the door on any hope of a damage race.

Given the prevalence of enters the battlefield effects on the creatures in this deck, cards like Hushwing Gryff are excellent compliments to an opposing strategy. Since the graveyard is important for Whip of Erebos and Sidisi, Brood Tyrant, a card like Anafenza, the Foremost is especially effective against it. If your deck can handle the creatures just fine, such as with End Hostilities, then using a card such as Utter End to kill the Whip of Erebos will drastically improve the matchup. Lastly, given the high density of important enchantments in the deck, a card like Reclamation Sage of Erase can act as a very efficient and versatile removal spell that allows an opposing deck to keep the Whip deck from gaining control of the game.Abzan Reanimator

The other Whip of Erebos strategy that has risen in popularity recently is the Abzan version. It is essentially the same deck except it runs Siege Rhino over Sidisi, Brood Tyrant and it runs a Sorin, Solemn Visitor and an Elspeth, Sun's Champion over the Ashiok, Nightmare Weavers.

In the board it gets a few different answers. It has Abzan Charm instead of Sultai Charm and it has Glare of Heresy and Utter End instead of Disdainful Stroke.

Given the close similarities in the two decks and the nearly identical overall game plan, I treat them each as essentially the same archetype. Most of the ways that are effective at fighting one are comparably effective at fighting the other. Anafenza, the Foremost is a little better against the Sultai version because it matches up better against Sidisi, Brood Tyrant than it does against Siege Rhino, but it is still very good against both versions.

Now that we know what we're trying to beat, let's take a look at what you can do to many of the major archetypes in Standard to put yourself in a better position to beat these Whip of Erebos decks.Metagaming Against the Whip Decks

Let's start with the most popular deck in the format.Abzan Midrange

In order to make the deck better against the Whip decks, I moved Anafenza, the Foremost to the main deck in place of Brimaz, King of Oreskos. They each serve a similar role in a lot of matchups as a large body to play on the third turn. Brimaz, King of Oreskos is better against decks where you want to be attacking and blocking simultaneously, but Anafenza is way better against Whip of Erebos and is also better at attacking past Courser of Kruphix. Given the prevalence of both those cards right now, I take Anafenza to be the better main deck three-drop in the current metagame.

In the sideboard, in place of the two Anafenzas and an Erase I added three Reclamation Sage. The Sage is especially good in a Whip deck because you can bring it back to kill another permanent. This deck doesn't have that option, but it's still a strong value creature. It kills just about any of their relevant permanents (Courser of Kruphix, Whip of Erebos, Doomwake Giant, etc.). This frees up space for our Hero's Downfalls to kill Sidisi or planeswalkers depending on which Whip variant the opponent is playing.Esper Control

Basically the only change I made to this deck is replacing a pair of Despise and a Treasure Cruise with three more copies of Utter End. Utter End is important right now since Whip of Erebos is a very relevant permanent that cannot be dealt with by Hero's Downfall.

If you tap low for a planeswalker or they force you to discard your Dissolve, you need some other way to combat Whip of Erebos. Given the amount of card access in this deck, four Dig Through Time should find you a copy of Utter End for each copy of Whip of Erebos the opponent finds. This will allow your End Hostilities to clean up the board without the opponent being able to easily Rebuild via the Whip. Hence with the addition of more copies of Utter End you give yourself inevitability against the Whip decks whereas without Utter End they are advantaged in the long game.Mardu Midrange

Philip Braverman finished in the Top 8 of the SCG Invitational this weekend with an innovative Mardu deck. Doomwake Giant and Arc Lightning are the two cards that deviate from the more traditional Mardu lists and I can understand the reasoning just by looking at it. Yuuya's Jeskai Token deck has taken off as a big contender in Standard and each of these cards is great at dealing with Hordeling Outburst and Raise the Alarm. More importantly, however, each is good at answering Hornet Queen, especially Doomwake Giant.

I'm not convinced that Mardu is as well-positioned anymore as it once was, but if you are intent on making Mardu work, I think Philip has come up with some nice technology to keep the deck competitive in a field of token generators. Crackling Doom and Chained to the Rocks still have legitimate uses against the token decks, especially against the Hornet Queen + Whip of Erebos decks since it kills Courser of Kruphix, Doomwake Giant, and Sidisi, Brood Tyrant.Jeskai Tokens

Dylan Donegan won the Invitational this weekend with an updated version of Yuuya's Jeskai Tokens deck. Disdainful Stroke was an excellent sideboard card against the Whip of Erebos decks for Yuuya, but given then prevalence of Whip strategies in the post-Worlds metagame, something more had to be done. Dylan found a great additional tool for fighting against exactly that: Hushwing Gryff.

Hushwing Gryff fits perfectly into the Jeskai Tokens shell and works great against Whip decks. In additional to turning Hornet Queen into a seven mana 2/2 deathtouch creature with no other abilities, it also shuts off Sidisi's enters the battlefield trigger. It likewise keeps Siege Rhino from draining from the Abzan builds. Another important consideration here is that it also (mostly) stops Doomwake Giant. Whip of Erebos entering the battlefield will still trigger a Doomwake Giant but Courser of Kruphix, Eidolon of Blossoms, and Doomwake Giant itself will not (because even though it's the enchantment characteristic of the card that triggers the ability, the card is also a creature and therefore has its ability stopped by the Hushwing Gryff). This essentially gives the deck six instant speed ways to neutralize opposing Doomwake Giants and Hornet Queens, two of which stop all future instances of the cards until dealt with.UW Heroic

Another deck that can benefit from Hushwing Gryff against the Whip of Erebos decks is UW Heroic. UW Heroic is already one of the best positioned decks against Whip strategies because it kills so quickly and because it has ways to dodge the small amount of removal spells the Whip decks typically run. These removal spells are also often expensive such as Hero's Downfall, giving the UW Heroic deck a pretty big tempo gain off the exchange. Murderous Cut is essentially their only hope, and UW Heroic usually has enough tools to fight through a Murderous Cut or two.

Post-board the Sultai versions are still in rough shape because they don't have a lot of ways to keep the Heroic deck from doing its thing, but Abzan versions have a bit more removal and also have Siege Rhino to buy some extra time to set up. Hushwing Gryff essentially takes away a lot of their outs and their removal is already heavily taxed. Hence unlike in other decks, the Gryff is likely to stick around and do its thing.

Even without the added Hushwing Gryff technology, UW Heroic is a fine choice right now in large part due to its favorable matchup against Whip strategies.Conclusion

If you're looking to sleeve up a Whip of Erebos deck, then this article has shown you some of the newest weapons people are using to combat your deck. If instead you're just looking for ways to beat the Whip decks, this article has highlighted several effective ways at accomplishing this. This is not an exhaustive list of solutions but it focuses on what I take to be the very best cards and strategies in the format against the Whip decks. Hopefully the information I shared with you today will keep you from losing the next time you get matched up against a deck running Whip of Erebos and Hornet Queen. Remember to kill their enchantments and/or to Silence the buzz with Hushwing Gryff. Or just wrath their board and have their Whip of Erebos meet its Utter End.