Modern Horizons 2 is one of the more exciting Magic: The Gathering sets to be released in recent memory, especially for those who are interested in playing Modern. Within Modern Horizons 2 there are many cards that will make an immediate impact in Modern, but there is one that intrigues me more than any other. I will jump into Ragavan, Nimble Pilferer in a minute, but before I do, keep in mind this is a card designed specifically for Modern, and we should think about it in that context. There are multiple cards in Modern Horizons 2 that would be too good if released in a Standard-legal set, and Ragavan is one of them. This creates a unique opportunity for Wizards of the Coast to design more powerful Magic cards than we typically see.

At one mana for a 2 power creature, Ragavan, Nimble Pilferer sits alongside a number of other great aggressive red cards. For one mana, being able to attack for 2 damage on turn two is almost as good as you can ask for. The 1 toughness here is a small hit, but the rest of Ragavan more than makes up for that. However, it does mean Ragavan is very vulnerable to opposing removal, especially Lava Dart. Ragavan also can be blocked quite easily, including by opposing creature tokens.

Whenever Ragavan, Nimble Pilferer deals combat damage to a player, create a Treasure token and exile the top card of that player's library. Until end of turn, you may cast that card.

The bonus of getting a treasure token when Ragavan, Nimble Pilferer deals the opponent damage, alongside being able to exile the opponent's top card and cast it, is an effect that has never been seen on a one-mana creature. We've never seen a Magic card close to this. This is the effect that makes Ragavan truly unique, and puts it in its own category when trying to compare it to any other creature for this casting cost.

Connecting and dealing the opponent damage on turn two isn't an unreasonable expectation, as in many games the opponent won't have a one-mana play. If they do, it still might not be a spot removal spell that can kill Ragavan, Nimble Pilferer, and even if it is, your opponent is still trading a card for a card. If your opponent plays a blocker, you could cast a removal spell to allow the Ragavan to get through for damage in some scenarios. 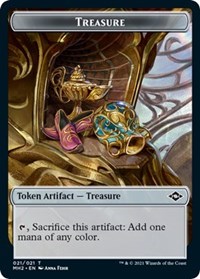 The treasure Ragavan, Nimble Pilferer creates is incredibly important because it either allows you to ramp or cast something off-color that you have exiled from the opponent's deck. Ragavan does not say you may use mana of any color to cast the opponent's spells, like similar cards have in the past.

Dash {1}{R} (You may cast this spell for its dash cost. If you do, it gains haste, and it's returned from the battlefield to its owner's hand at the beginning of the next end step.)

The last part about Ragavan, Nimble Pilferer is its ability to dash. This effect will be useful when you draw Ragavan later in the game, and are looking for a quick source of damage. Personally, I'm not sure Ragavan needed the ability to dash, as there is a lot going on with this card already. However, now we can compare it to a card like Zurgo Bellstriker, and I believe it matches up favorably. Many of the best red creatures have haste, and Ragavan has this ability as well when cast with dash.

Not (Strictly) an Aggro Card This is the most common misconception when looking at Ragavan, Nimble Pilferer. Players are comparing it to Goblin Guide, but I see Ragavan as very different from Goblin Guide. Goblin Guide needs to be in a hyper aggressive deck, otherwise the card is not good because you are giving the opponent additional cards each time they reveal a land off of its trigger.

Ragavan, Nimble Pilferer doesn't deal damage on turn one, like some other one-drops in the format. Its value comes from the additional mana it can provide through Treasure, and sometimes actual card advantage by casting something from the opponent's deck. Ragavan is going to be a better card over a longer game, assuming you can hit the opponent with it.

The Obvious Homes for Ragavan May Not Be the Right Ones

Simply looking at the top red decks in Modern and slotting four Ragavan, Nimble Pilferer into them is not a recipe for success. Take a look at Burn for example—I don't think Burn will be a good home for Ragavan. There certainly are some different ways to approach that archetype, and you could likely find a way to build around Ragavan, but the most common way to build Burn is to be a very low-curve deck. If you don't play spells that cost more than two mana it becomes less likely you can take advantage of the treasure Ragavan can create.

Additionally, Burn is less likely to care about casting the opponent's spells, unless it's a Burn mirror. Most of the time Burn cares almost exclusively about casting burn spells every turn. Rather than a straightforward aggro deck, I think Ragavan may end up fitting better in an Izzet deck that has more play later in the game.

Izzet Prowess, aka Blitz, is an excellent fit for Ragavan, Nimble Pilferer. Keep in mind this is already one of the best decks in the format, so if Ragavan improves it, that may be scary for the rest of the format.

The Izzet decks care more about generating the extra mana off Ragavan, Nimble Pilferer, while also being aggressively slanted. Here for instance, you can actually play Ragavan on turn one, cast Expressive Iteration on turn two by cracking your Treasure, and make a land drop. This is going to be a popular sequence.

Here is a version of the deck:

This is a recent list. I simply added in four copies of Ragavan, Nimble Pilferer, shaving some other creatures, but I think that change is worth it. There may even be other cards in Modern Horizons 2 worth considering here, but for the sake of this article I'm focusing on Ragavan. I think adding four copies to the deck is going to make it even more explosive because of the additional mana generation.

The removal spells help clear any blockers out of the way, and allow Ragavan, Nimble Pilferer to get in for damage. I see this as the easiest home for Ragavan because it is focused on doing a lot with its mana and creating card advantage with cards like Expressive Iteration.

In some ways Ragavan, Nimble Pilferer acts as a blue card, as that's going to be the color it pairs best with. Modern is a format where you can essentially play as many turn one red sources as you want to while still having plenty of blue sources, and that wouldn't be true in Standard or even Historic.

If you are looking for a mono-red deck that Ragavan, Nimble Pilferer can slot into, then it will likely also run Blood Moon.

Casting Blood Moon on turn two might be the most powerful thing that Ragavan, Nimble Pilferer enables. There are already mono-red [[Blood Moon] decks in the format, and I can't think of a card they would want to add more than Ragavan.

Here is what this style of deck looks like:

Ragavan, Nimble Pilferer works very well in this sort of red deck that can play a more midrange game. Seasoned Pyromancer has the ability to refuel your hand with gas, and is another powerful turn two play that can be enabled by Ragavan, Nimble Pilferer. Being an Obosh, the Preypiercer deck works perfectly with Ragavan, as the treasure Ragavan generates is going to give you three mana on turn two anyway, so there really isn't much need for two-mana cards here.

I expect this deck to pick up a lot of popularity. Being able to cast Blood Moon a turn early can easily be the difference in a game, as the opponent has less time to fetch their basic lands. While this looks like an aggro deck, because of how fast Modern is I see it being a bit slower and reactive compared to some of the other red strategies.

There are some decks that Ragavan, Nimble Pilferer already cleanly slots into, and then there may be new decks built around Ragavan that weren't previously around. The card is powerful enough that it's okay to change your deck a bit in order to make it good. The biggest knock against it is (as I mentioned) the existence of Lava Dart and other cheap spot removal. I'm interested to see how the battle between playing a card like Soul-Scar Mage versus Ragavan unfolds in some of these decks.