Flesh and Blood is the newest, hottest, and shiniest trading card game from Legendary Story Studios. Unlike other games that want you to summon mystical or mechanical creatures to defeat your opponent, Flesh and Blood puts the sword in your hand so that you can take the fight to the enemy. With unique mechanics for generating resource points and keeping your hand full, you have options and opportunities to make plays at every step of the game.

In a game of Flesh and Blood, you play as one of the heroes of the world of Rathe, each with their own abilities and cards. Your deck is full of cards you'll use to cast magic, spring traps, or apply axes to faces. Play your cards right, and you'll break through your opponent's defenses and damage them, lowering their life total.

Reduce them to zero life, and you win!

There are seven card types in Flesh and Blood.

Hero cards represent heroes from the world of Rathe. Your deck has one hero card, which starts the game in the arena and never leaves play.

Weapon and equipment cards represent the gear your hero brings into battle. These cards don't go in your deck. Instead, you start with them in the arena, and they stick around until they're destroyed by a card effect.

Action, attack reaction, defense reaction, and instant cards represent moves your hero can do. You can play them for their effects, but you can also use them to defend yourself from damage, or pitch them to pay for your other cards. Unless they say otherwise, these cards go the the graveyard after they resolve. 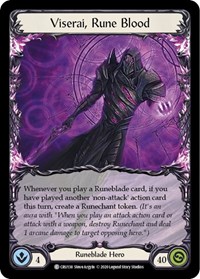 Your hero is the foundation of your deck, as it determines your starting life, the number of cards you draw, and what cards can be put into your deck. They're similar to heroes from Hearthstone, vanguards from Magic Online, and leader cards from Dragon Ball Super. 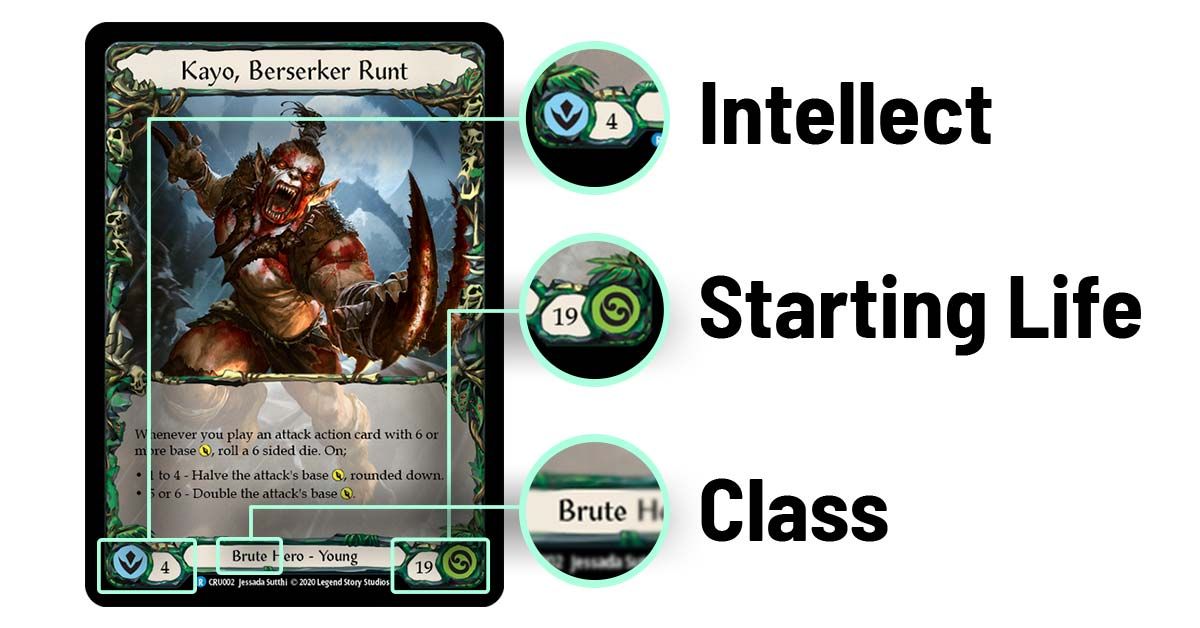 In the bottom right corner of your hero card is your starting life total. If this number is reduced to 0, it's lights out for your hero, so make sure to drop your opponent before they can do it to you!

In the bottom left corner of the hero card is your intellect. On the first turn of the game and at the end of each of your turns, you draw until you have a number of cards in hand equal to your hero's intellect.

Finally, at the bottom center of your hero card is its class. When building your deck, you can only include generic cards and cards that match your hero's class, so pick a hero that matches the type of cards you want to play. Your chosen hero also determines your specializations, powerful cards that can only be played if your hero matches the named card. 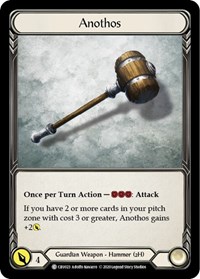 Before a game begins, after each player reveals their hero, you choose your weapons and equipment from a special set of cards that are outside the game, called you "inventory." This is similar to a sideboard in Magic, or a side deck in Yu-Gi-Oh. You're allowed to pick up to two weapons, and up to one equipment of each type.

The weapons and equipment you choose begin the game in play, and offer your hero ongoing abilities and effects so you always have options on your turn. They remain in play until they are destroyed by a card effect. 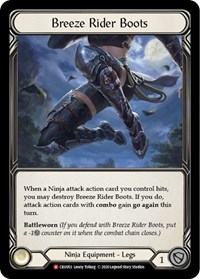 You can bring different kinds of equipment to deal with different heroes. If you're facing Dorithea, you may want to bring armor with high defense stats to defend against her powerful blows—but that same armor may be akin to paper against a powerful wizard like Kano. Having access to different types of armor allows you to adapt to your opponent's strategy before the game even begins! 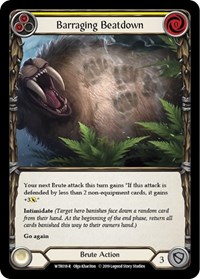 In your deck, you will find action, reaction, and instant cards. 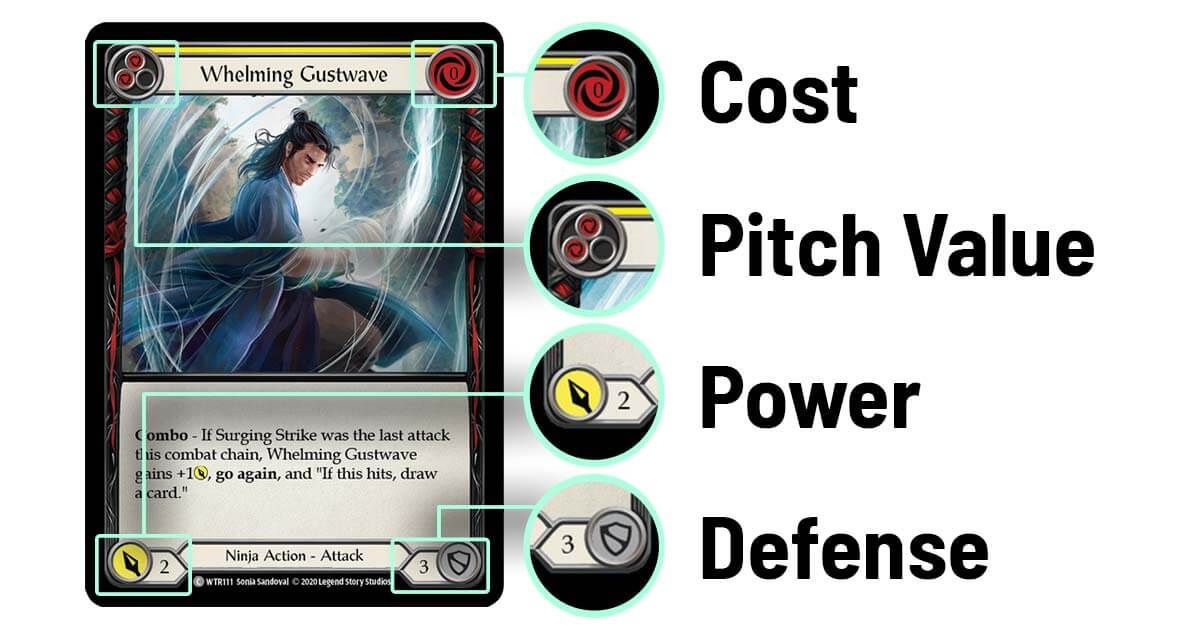 At the top of each card, you'll find its pitch value and cost. At the bottom you can find the class restriction and card type, as well as the card's power and defense, if any.

Note: Weapon and equipment cards also sometimes have power and defense values. If they do, they can be used in the same way as an action card with those values.

In order to play actions, reactions, and instants, you must have enough resource points to pay the cost. You get resource points by pitching other cards from your hand as you play the card you're paying for. Each card gives you points equal to its pitch value. The pitched cards are sent to the "pitch zone," and at the end of the turn, you'll put these cards at the bottom of your deck in any order. So be mindful of what you pitch—it's probably going to show up in your hand again later.

Each action, reaction, and instant card has three different versions with slightly different stats. You can tell the versions apart by the color strip at the top of the card. 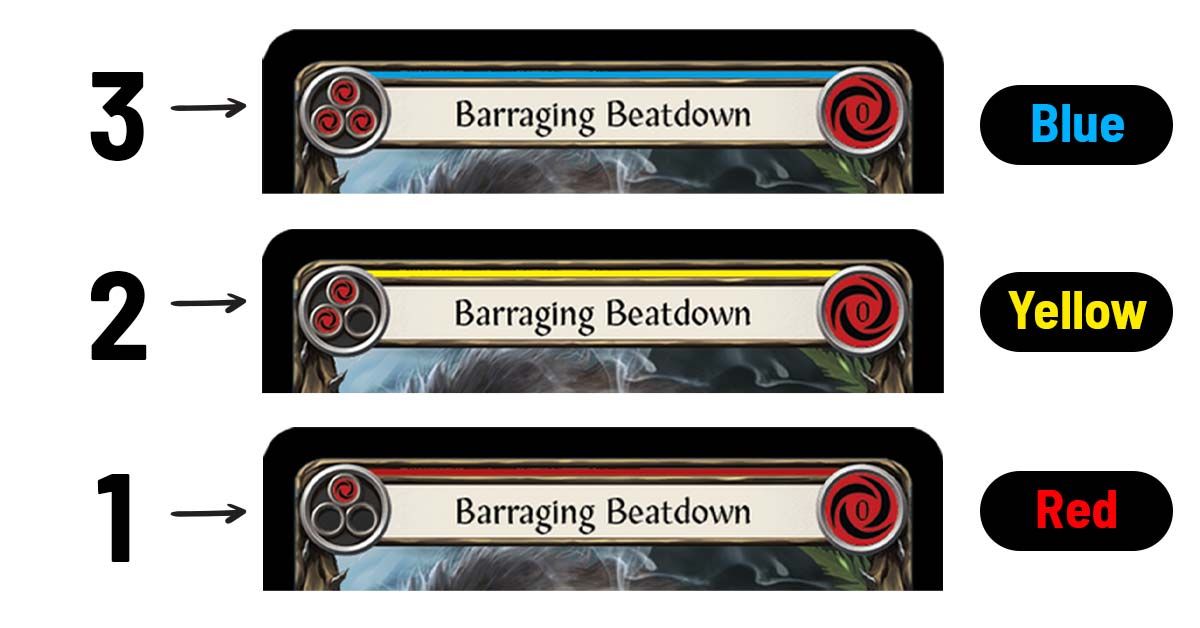 As each color has strengths and weaknesses, one of the most important parts of the game is managing how and when to use your cards. Knowing when to play a card and when to pitch it to do something else often means the difference between victory and defeat.

The basic turn structure of Flesh and Blood is simple.

Then it's the other player's turn. Play continues until only one player's hero has life left.

Things get more complicated if one of the actions a player does is an attack. When you make an attack action, it becomes part of the combat chain.

The combat chain is both a sequence of steps and a physical space the players use to keep track of those steps. When players play or use a card during combat, they move that card to the center of the play area, next to the last card that was played. This creates a "chain" of cards stretching horizontally between the players. When both players are done, the chain resolves.

There are five steps:

During the attack step, the attacking player moves the card they're using to attack to the combat chain. Each attack has a certain power, which is the base amount of damage the attack will do.

When both players are done playing reactions, players total up the attacker's power and the defender's defense. If the power is greater than the defense, the attack hits and the attacker deals damage equal to the difference between the two. For example, 6 power - 4 defense = 2 damage.

Finally, all the cards leave the chain. Normally, these cards go to the graveyard unless they're weapons or equipment.

Your First Turn of Flesh and Blood

Now that we've established the rules of the game, it's time to see them in action! Once both players have placed their heroes, equipment, weapons and deck into their respective zones, each player draws a number of cards from their deck equal to their hero's intellect. The first turn player is determined (usually by a die roll) and then the game begins!

Here's what the first turn of a game between Dash and Viserai might look like. Let's watch from Dash's perspective. 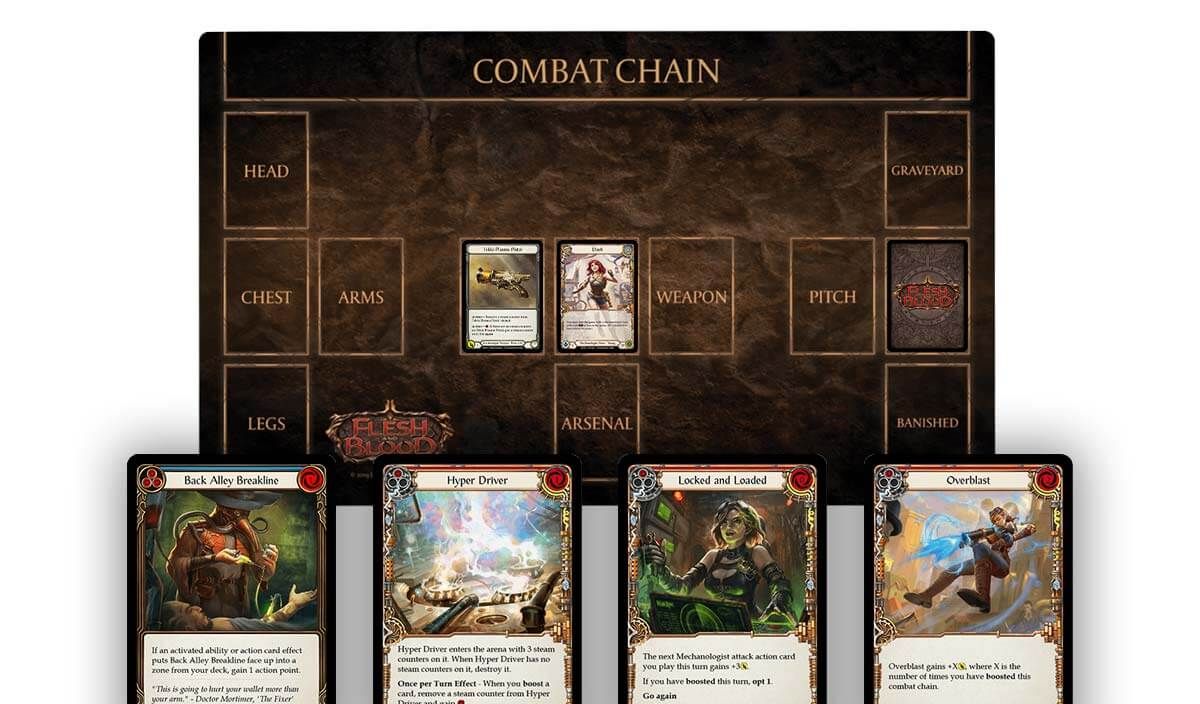 The Dash player goes first and draws 4 cards at the beginning of the game: Back Alley Breakline (blue), Hyper Driver (red), Locked and Loaded (red), and Overblast (red). She starts with Teklo Plasma Pistol in play. 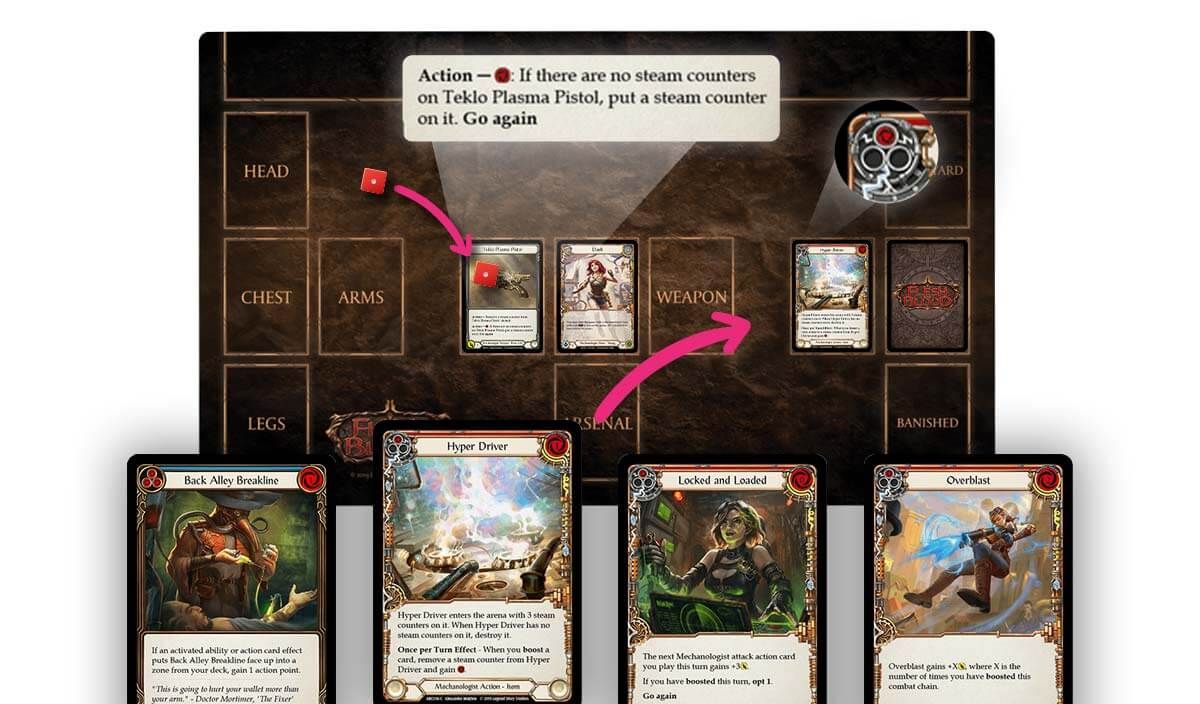 Dash wants to attack with her Teklo Plasma Pistol, but it needs time to charge up. Dash uses her action to put a steam counter on the Pistol. This costs one resource point, so she pitches Hypder Driver (red) to pay for it. Now the pistol will be ready to fire on her next turn.

Normally, this would be the end of Dash's turn. But because the Pistol's ability has Go Again, she gets to take another action. 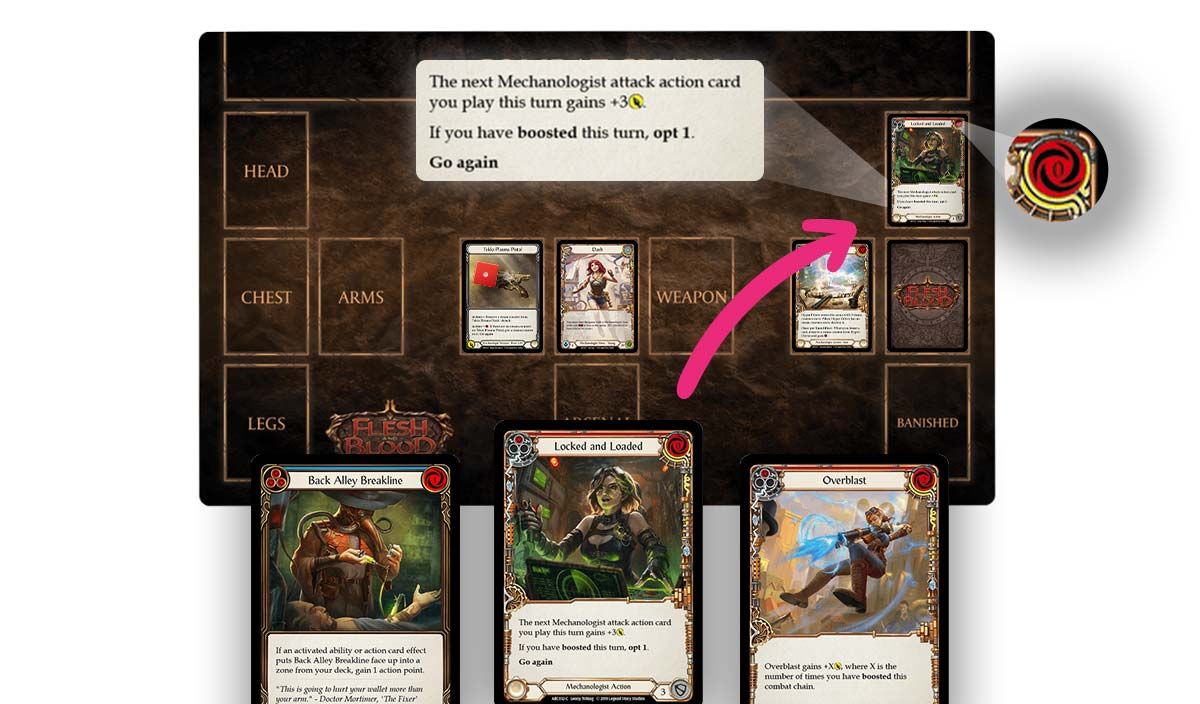 Locked and Loaded (red) resolves and goes to the graveyard. Because it also had Go Again, she gets to take a third action. 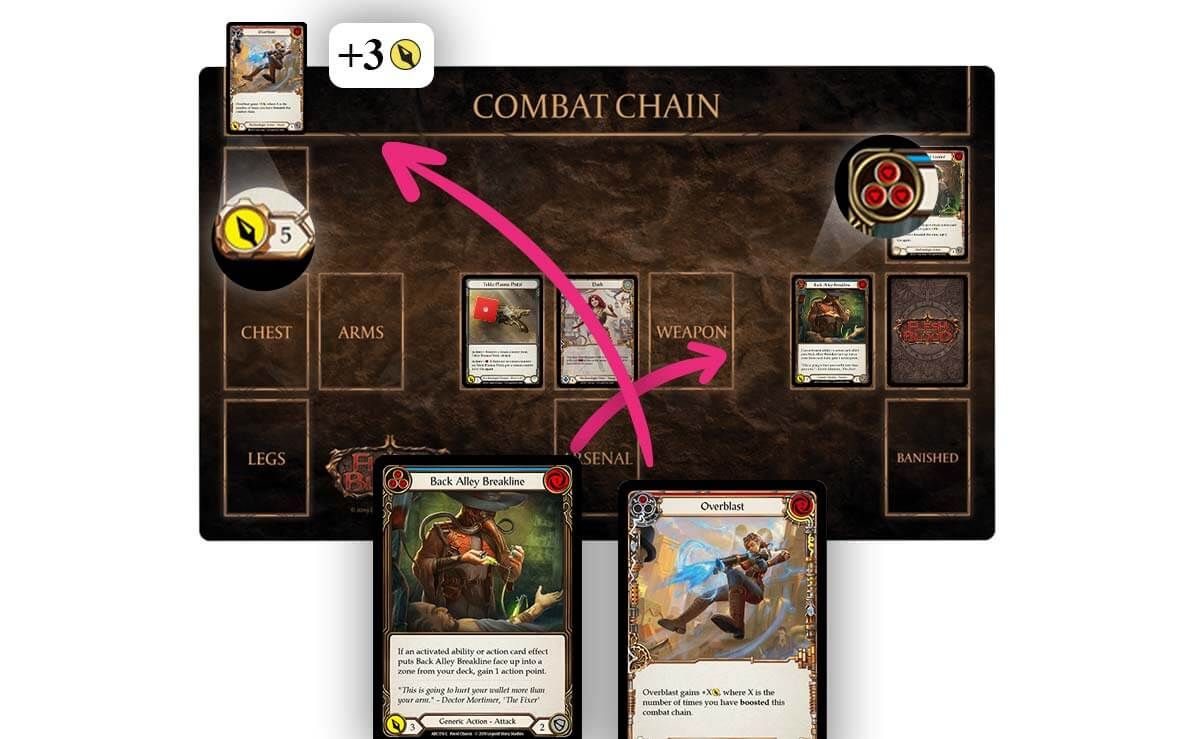 For her third action, Dash plays Overblast (red). This card costs 2 resource points to play, so Dash pays for it by pitching Back Alley Breakline.

Overblast's base power is 5. It has extra power on turns when Dash has "boosted," but she didn't boost this turn, so Overblast's card text doesn't do anything. However, thanks to Locked and Loaded, Overblast gets a bonus of 3 power, for a total of 8.

Overblast is an attack action, so it goes on to the combat chain, halfway between both players. 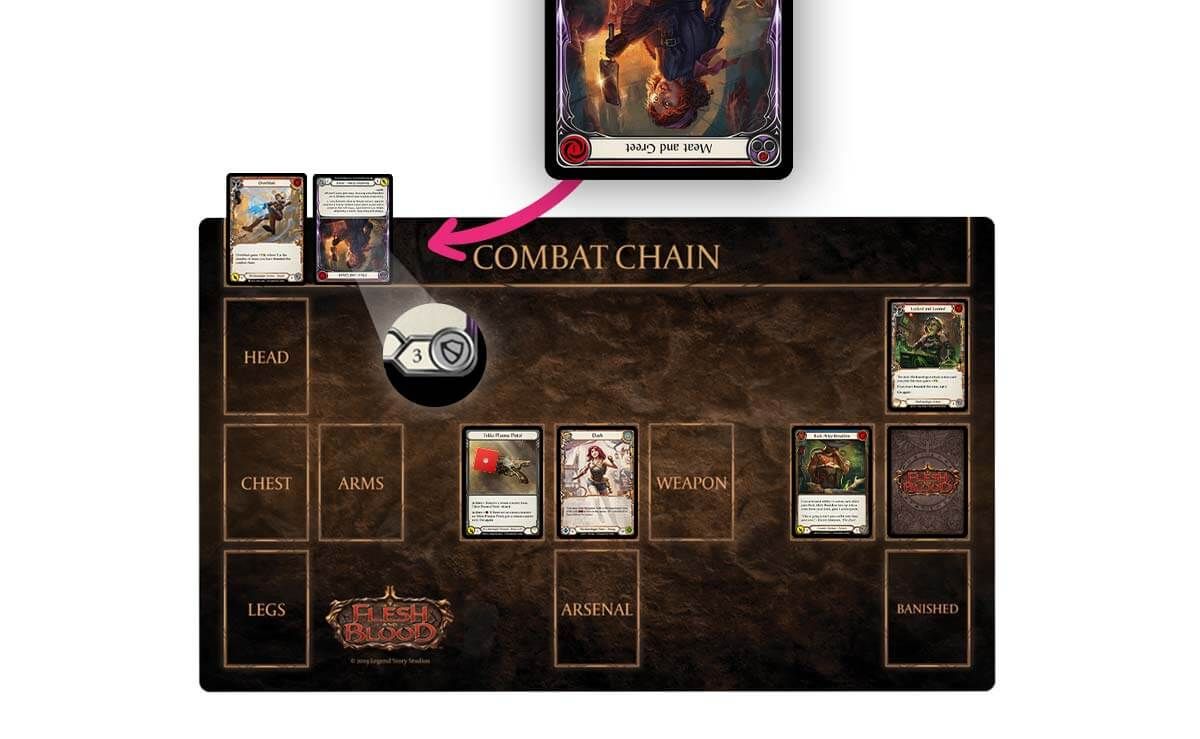 Viserai doesn't want to take too much damage, but also doesn't want to lose too many cards, so he uses Meat and Greet (red) to defend. Because he is defending with the card, he doesn't have to pay the card's cost—he just adds it to the chain for its defense value. Meat and Greet's defense value is 3, so Viserai is currently set to block 3 of the 8 damage coming his way. 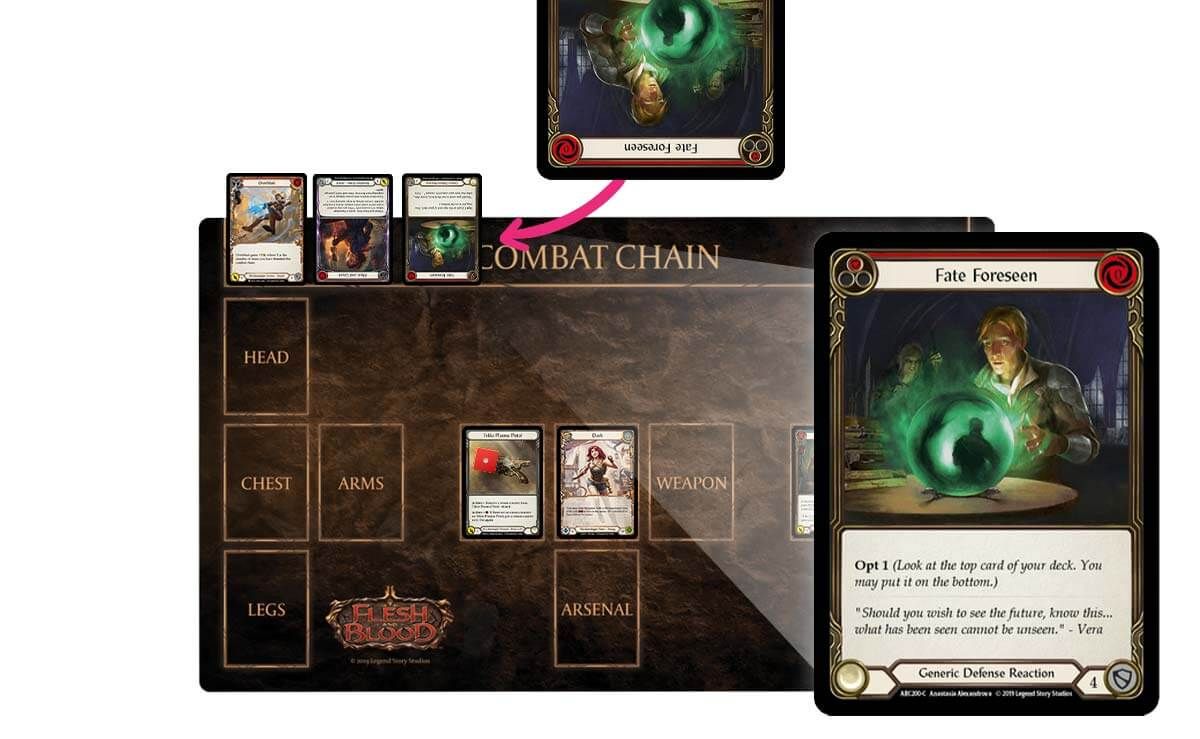 Dash doesn't have an attack reaction in her hand, so she passes. Viserai now has the opportunity to use defense reactions. He plays Fate Forseen (red) to boost his defense by 4, up to 7.

Because he's playing Fate Foreseen as a defense reaction, instead of just using it to defend like he did with Meat and Greet, he also gets to do everything on the card. In this case, that means he gets to Opt 1.  He has to pay the card's cost to play it as a defense reaction, but Fate Forseen costs 0 so he doesn't need to pitch any cards.

After Viserai gets to Opt 1, he passes. Now that both players have finished using reactions, the total power and defense values are added up: 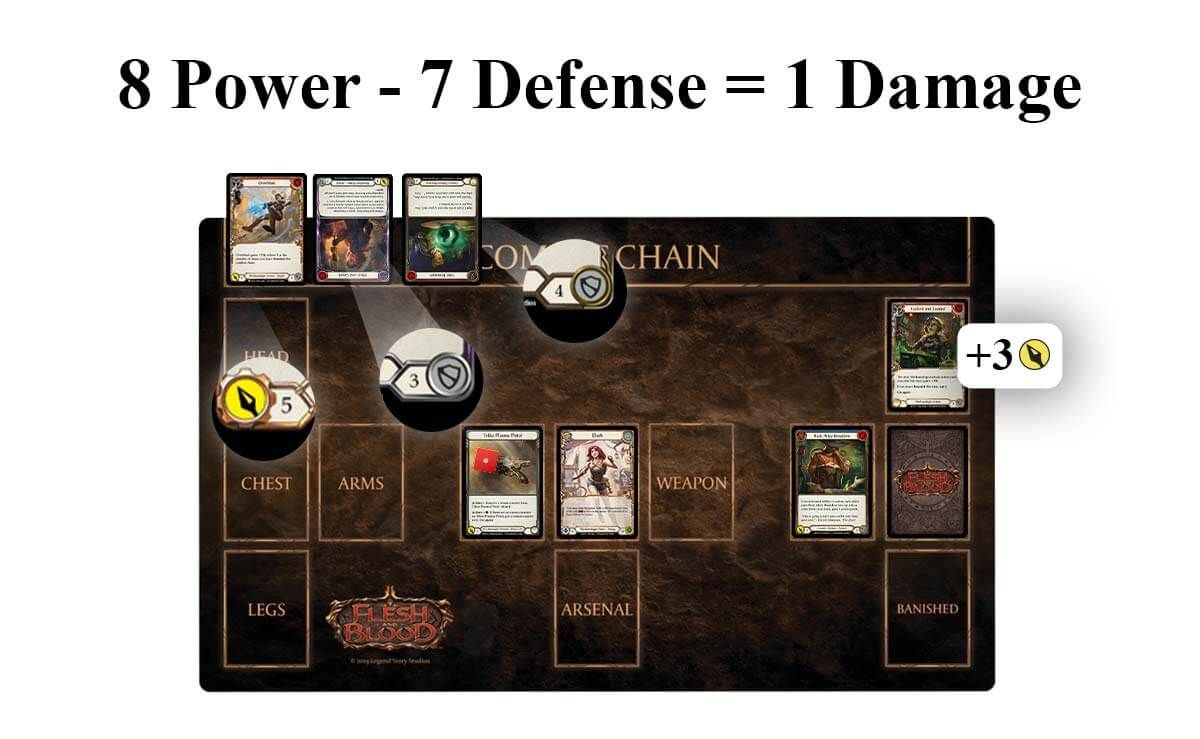 Dash's Overblast (red) has a power of 8, while Meat and Greet (red) and Fate Forseen (red) have a total defense value of 7. Because the total power is higher, Overblast deals 1 damage to Viserai. All cards on the chain move to their players' graveyards, and Viserai goes from 20 life down to 19.

Dash is out of actions, so her turn ends here. She draws up to her intellect, which is 4. Now it's Viserai's turn! Note that he won't draw until the end of his turn, so all the cards he used to defend are cards he won't get to use during his turn.

One Last Rule: The Arsenal

Now that you understand the basics, it's time to learn about the most skill-testing aspect of Flesh and Blood's design.

Note that you can only play the card in your arsenal. You can't use it to defend, or pitch it for resource points. But if you use it well, the arsenal is perfect for setting up future combos!

See You In Rathe

The video above and the official rules cover everything above in even greater detail. Otherwise, all you need now is a hero, a weapon, a deck, and some enemies to crush! Flesh and Blood's latest set, Monarch, is on the horizon, and with it are new Blitz decks you can use right out of the box to start clashing with your friends.

If you have questions about the game or just want to tell me about who your favorite Hero is (mine is Viserai), you can reach me by email or on Twitter, where I talk about card games, board games, and any other hobbies I can sink my teeth into!