Special thanks to Kara Perno and the Direct Team for sharing their time and expertise.

Wherever there's a market for valuable items, there are unscrupulous people trying to pass off fakes as the real thing. Unfortunately, this also applies to Magic: The Gathering cards.

In this guide, I'm going to teach you how to spot counterfeit Magic cards. But first, the good news!

Whenever you buy cards through TCGplayer, you are always 100% protected by our Buyer Safeguard. If you believe you have received a counterfeit card from an order through TCGplayer, contact our dedicated customer service team right away to report it. We'll send you a prepaid mailer that you can use to send the item to TCGplayer HQ. Our expert team will review the card to determine if it is indeed counterfeit through a series of tests. If it is a counterfeit, we'll work directly with the seller to resolve this issue.

Our team checks every card we ship through TCGplayer Direct. All the examples below are actual counterfeit cards we caught before they could slip into our inventory.

A Word of Caution

None of the techniques described below are 100% conclusive. Some fakes appear real under one or more tests, and some real MTG cards have printing inconsistencies that make them appear fake. Be careful when trading or buying in person. When in doubt, apply multiple tests, and use your judgment. If a deal looks too good to be true, it probably is.

This doesn't include proxies—cards players have made to stand in for cards they don't own, or don't want to shuffle. Fake cards are made with the intent to deceive someone into thinking they're real. Proxies are obviously not "real" upon inspection, because they're made for gameplay and testing, not to trick people out of their money.

As a general rule, the majority of fake cards are:

Valuable. Scam artists don't waste time counterfeiting commons or uncommons that are less than a dollar. The more valuable a card is, the more likely that someone will attempt to make a counterfeit.

In good condition. Near mint cards are more valuable than lightly played, moderately played, heavily played, or damaged cards. As a result, scammers tend to keep their counterfeit cards looking pristine, and anyone they scam is likely to do the same.

Occasionally, though, a scammer will rough up a card to make it appear more authentic, so be wary of marks that look intentional rather than accidental.

Non-Foil. While not impossible, the foiling on Magic cards is extremely difficult to fake convincingly.

Your Best Tool: Your Gut

Your brain is better at identifying patterns and spotting irregularities than it is at articulating what it's noticing. If a card feels "wrong," trust that feeling and investigate closer. The more Magic cards you interact with, the better you will become at discerning qualities that are hard to quantify, like texture and smell.

Here are some cards that felt immediately wrong to our team. Fake on the right. Notice the discoloration in the art. Fake on the right. Notice the brighter colors and the loss of detail in the art.

The best way to evaluate a card is to compare it directly with a copy of the same card which you know is authentic. Fake on the right. Notice the smaller font in the type line, and the slightly smaller droplet in the blue mana symbols.

If you don't have a copy of the card in question, the next best thing is a card from the same set with similar attributes, like color, rarity, or foiling.

Compare the size, the font, and the spacing between the letters. Check the texture and reflectiveness of the cards' surfaces. Soften your gaze and rely again on your instincts.

Other Tests We Recommend

If you're suspicious of a card but still unsure, it's time to run some tests.

We've found the following tests to be reliable.

Rare and mythic rare cards printed in and after Core Set 2015 (July 2014) have an oval hologram sticker at the bottom center of the card, under the text box. These have proven very difficult to forge.

When scammers do try to fake the sticker, the result typically looks damaged up close. MTG card stock has a fairly consistent weight. Be cautious with cards that feel noticeably lighter or heavier than usual.

The pattern of these dots is called a rosette, and different kinds of printers produce different rosette patterns. All the cards from a given set are printed on identical printers. If you're concerned about a card, compare it to another card from the same set. If the rosettes don't match, you're looking at a fake. Fake. The rosette pattern is completely different, and you can see the texture of the card is ribbed instead of flat.

On older Magic cards, the black ink used to print card text and mana symbols was printed last, over the colors underneath. This created a sharp edge between the black ink and the other colors.

Using a jeweler's loupe again, check the card's name and mana symbol. If the black ink has a fuzzy edge or is made with rosettes, it's fake. 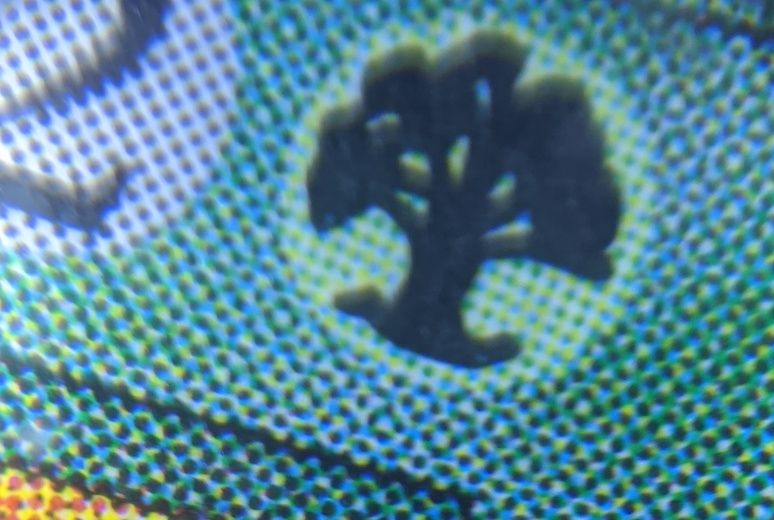 Real. Notice how the black of the mana symbol is completely black throughout. Fake. Notice how the black of the mana symbol and surrounding text are made of rosettes, and not black throughout.

You can find many other tests for determining authenticity online. We don't recommend them, for different reasons.

The light test involves shining an LED light behind the card. This light will shine through real Magic cards, and the blue glue at the center of all Magic cards will give the light a blue tint. If the light can't pass through, you've got a fake.

This test is easy to do with your phone, and reliable in the sense that a card that fails is practically guaranteed to be fake. However, these days many fakes can pass the light test, which makes it extremely unhelpful when you're already unsure about a card. Be aware of this test, but don't rely on it.

This test involves bending the card so that the top and bottom touch, and then releasing it. Real Magic cards are highly resistant to bends, so they usually return to their flat shape with no sign of a crease in the middle. Weaker card stock can't bounce back as easily, so fake cards will remain bent and show a crease.

We don't recommend this test because any card will crease if you bend it too many times. We're not in the habit of damaging cards that could be worth tens or hundreds of dollars, and we doubt you are either.

Thankfully, you don't need to bend a card completely in half to get a feel for the strength and elasticity of its card stock. Hold the card in your fingers and apply the slightest amount of pressure with your thumb. You'll feel the card give, and then return to normal when you release it. Do the same thing to a basic land from the same set, and compare how it feels. Your sense of touch is much more reliable than sight for judging the material of a card, and it'll get even better with practice.

To do this test, simply shine a blacklight on the card. Supposedly, real Magic cards shine under blacklight, while many fakes do not.

Let's be real, though. Unless you're way cooler than we are (not a high bar, we admit), you don't own a blacklight.

If you're going to buy a special tool to check the authenticity of trading cards, you're far better off spending $20 on a jeweler's loupe than a blacklight. You'll get better information and fewer false positives.

We don't recommend ripping a card in half to check if it's authentic, for obvious reasons.

Keep your eyes open, trust your instincts, and don't let people bully you into trades or purchases you don't want to make. Do that, and you're much less likely to waste your money on worthless pieces of cardboard. And you'll have more money for high-value, collectable pieces of cardboard.