Zendikar Rising is finally upon us, and everyone is asking the same question: where the heck do I go from here?

MTG Arena has released all the new cards, and players all over the world are cracking packs and figuring out what to build in a brand new Standard format. Many sets rotated, there are a TON of new mechanics and archetypes, so a lot of people have found themselves lost in the party. Don't worry, you don't have to spend all your wildcards just yet, I'm here to do that for you. I'm going to take a look at a couple archetypes people have been most excited about and give you my initial reactions to each one so you get to decide for yourself which deck you want to throw all your wildcards at right off the bat! Lotus Cobra appears to be the best card in Zendikar Rising by far. Lotus Cobra alone has the ability to make a four-color deck possible, and if we are playing four colors, we are definitely playing Omnath, Locus of Creation. Because of the cards already printed in 2020 *cough cough Uro, Titan of Nature's Wrath*, it is easier to trigger Omnath, Locus of Creation two or three times with landfall.

There aren't as many ramp cards in Standard as there are in Historic, but Dryad of the Ilysian Grove and Uro, Titan of Nature's Wrath help ramp us into powerful spells that end the game like Genesis Ultimatum or Ugin, the Spirit Dragon. Terror of the Peaks and Omnath, Locus of Creation are both powerful with Genesis Ultimatum because of the enters-the-battlefield triggers.

I envision this Standard being a split between midrange decks, Dimir Rogues and Aggro Winota decks. Four-Color Omnath will be able to out-grind and play more game-ending spells than most midrange decks. It will likely need some help in the sideboard against Winota decks, but the matchup might end up being a race most of the time.

After one match I have confirmed Lotus Cobra is one of the best things you can be doing in the new set. If you get to untap with it, there are so many ways to trigger landfall multiple times in one turn and end up so far ahead of your opponent. 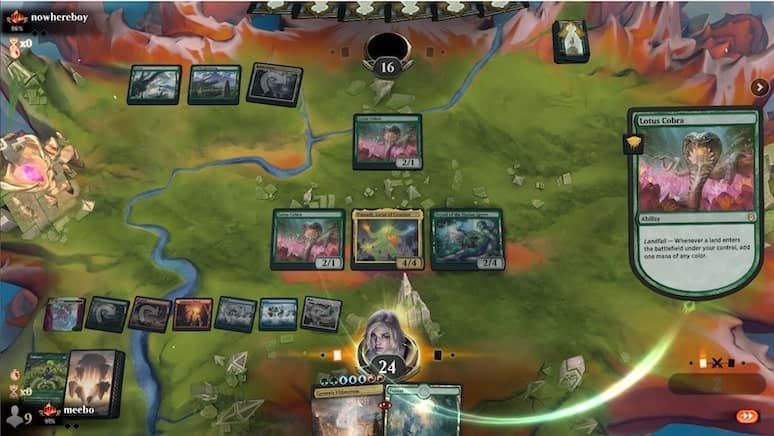 Something I've noticed is how important your land drops and sequencing are in this deck. This relates to all of Standard now because of the Pathways lands, but especially in this deck when you are trying to cast spells with a lot of pips like Omnath, Locus of Creation and Genesis Ultimatum. It is important to think about what you want your future turns to look like and plan your land drops accordingly. Identify which color of mana you'll need in the future turns to decide which side to play your Pathway lands on. Additionally, it can take a while to get used to identifying how much mana you'll have with Lotus Cobra triggers. There are other small things you need to be aware of as well, such as putting a Pathway land into play off of Uro, Titan of Nature's Wrath will only let you put the front half into play. These new double-faced cards have fundamentally changed the way we build and play decks, and it is going to take a while to get used to.

Overall, this deck has definitely lived up to its hype. This deck will be present in Standard, and if this is your style, you should be comfortable crafting most of these cards. Some of the lines and sequencing, specifically the land drops like I mentioned, are difficult at first and take some thought before playing them. Four-Color Omnath feels like one of the best things you could be doing right away in new Standard, and I will continue to work with this archetype to tweak and perfect the deck.

Nahiri, Heir of the Ancients

Winota, Joiner of Forces is inherently broken, and enables powerful gameplay. I've been enjoying the idea of Naya Winota decks because of the consistent turn-three Winota thanks to Lotus Cobra, but today I'm going to try a Boros build, focused on more aggression and consistency with the manabase. The payoff Humans in this list include Haktos the Unscarred and Kenrith, the Returned King. However, you can still hit some other powerful and synergistic cards like Basri's Lieutenant and Kargan Intimidator. Aggro is always strong in the first weeks of new Standard, so I wouldn't be surprised if Winota decks dominate Standard until people finely tune Midrange and Ramp decks. I think Winota has some ban potential, but if you already have Winota on Arena, there aren't as many wildcards needed to complete this deck as some of the other decks in the format.

A consistent aggro deck is exactly what you need to punish clunky three or four-color decks in week one of Standard formats. Winota is no exception now. But while I think the deck is powerful, I am skeptical that it will remain at the top of the format for long. Winota decks rely on some amount of variance to enable truly explosive starts, and this often falls to a decent amount of interaction. As the weeks progress, decks will start to adapt to Winota by playing color-specific removal, like Redcap Melee, or decks that often prey on Winota, like Sultai Ramp/Midrange. Embercleave has been a great mirror breaker in the games that I've played today. This build of Winota also has a lot of great options on the sideboard for mirrors as well as other matchups you may face. Redcap Melee might be one of the best sideboard options in Standard currently because of its versatility. It hits Omnath, Locus of Creation and Winota, Joiner of Forces, or really even anything else if you're willing to sacrifice a land as well. Overall, I rank this deck below Four-Color Omnath, and it's likely only a great deck early in the format.

A lot of people are skeptical about the legitimacy of Dimir Rogues in an Uro, Titan of Nature's Wrath format because milling your opponent is often beneficial to them. However, a lot of these Dimir Rogues lists do not solely rely on milling out your opponent, and they put on a decent amount of pressure to create an interactive tempo deck. Zareth San, the Trickster seems to be one of the most powerful parts of this deck, and can mitigate the Uro, Titan of Nature's Wrath problem against some heavy creature decks. I also anticipate Rogues will be powerful against other creature decks.

This deck is fun and has a lot of strong synergies and interactions. However, I don't think this deck is going to be tier 1 in Standard. It doesn't kill the midrange and ramp decks quickly enough, and it doesn't interact well enough with the aggro creature decks to be successful in Standard. I was successful against Mono-Red Aggro, but the deck can struggle against something explosive like Winota, Joiner of Forces.

If this deck is up your alley, you'll have a lot of fun and can still win games, but it will likely be a tier 2 strategy in Standard.

I am still convinced Lotus Cobra is the most powerful card in Zendikar Rising, largely due to everything else that was already in Standard. Because of this, I would recommend playing Four-Color Omnath, or any other ramp deck that utilizes Uro, Titan of Nature's Wrath. I will continue to work on Four-Color Omnath in the upcoming weeks and write a deck guide in the near future.

Zendikar is still largely unexplored, and I am excited to see where Standard goes as the format continues to develop. Happy testing!