Thanks to Wizards of the Coast for this exclusive preview.

Innistrad: Midnight Hunt takes us back to the land of zombies, werewolves, and other creepy things that go bump in the night. While we're all excited to return to a plane of gothic horror (just in time for spooky season!), today's preview reveals a slightly less sinister side to the new set.

That's right, we're planeswalking our way over to Innistrad, and WoTC has generously bestowed us with…….an Angel? 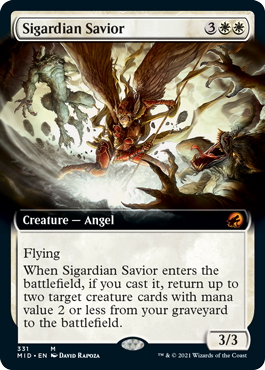 While Seth predicted plenty of Humans in White last week , this preview is all about their divine protectors, the original guardians of Innistrad.

Is it a flavor win? Not exactly. Sure, it's a cool enough Mythic, but I feel like most of us are more interested in the dark forces on Innistrad than the goody two shoes Angels attempting to keep them at bay.

Or maybe that's just me.

But back to our card. Looks like this Angel is looking to call in some backup, pull a few friends out of the graveyard, and bring them back to beat up a Werewolf or two. True, the friends will be a little bit smaller, but hey, there's safety in numbers. Unfortunately for this Savior, I'm team Werewolf all the way.

That said, there is an audience for Sigardian Savior, particularly in the right format.

Historically — and by historically I mean over the past few years — white has trailed behind the other colors in the Commander format, at least in terms of powerful mono-color strategies. Some players will say it's up for debate, but the top all-white commander deck from the past 2 years ranks at a disappointing #177, behind single-color decks — sometimes more than one — from all four other colors.

That said, white is still a great addition to many decks for support, whether it's removal, protection, or...well, probably just removal or protection, let's be honest.

The Sigardian Savior here provides some decent value with more bodies for protection, bringing back small creatures from the graveyard to enjoy a second go-around on the battlefield. They can serve as blockers to protect bigger, badder players on your board, and mayyybe even get a little bit of damage in before they die...again.

It's always nice when creatures can be recycled and given a second chance at gameplay. It's especially nice when we can bring back creatures that have ETB (enters-the-battlefield) effects, allowing for a second (or third, or fourth…) trigger. Sigardian Savior could easily find a place in some kind of Commander reanimation combo. Before we get too carried away, let's acknowledge this card's limitations. Sigardian Savior has a cast trigger to keep it from being completely broken. It's like Sun Titan, although the latter allows for the reanimation of larger permanents (mana value 3 or less, rather than Sigardian Savior's 2), and does so on ETB rather than at casting.

Sigardian Savior's most obvious flaw really lies in this particular limitation — it can't be blinked to abuse its cast trigger. Ultimately, even with its cheaper mana cost compared to Sun Titan, and the fact that it accomplishes 2 results instead of 1, it's still probably going to see less gameplay. Sun Titan is just more flexible.

It's not the only Angel type spoiled so far — see Enduring Angel // Angelic Enforcer — but Angels, while definitely present on 2 cards, are unlikely to be a major presence. Spirits and Humans are much more likely, with a history of being supported in past Innistrad sets. Let's take a glance backward, though. Consider the fairly recent Kaldheim and Modern Horizons 2 sets, both of which welcomed a heavenly host of new Angels and angelic support.

Here's the Angelic crew from Kaldheim: For two different sets that are NOT particularly angelic in theme or flavor, that's a lot of Angels. It's almost like they're trying to tell us something. Yes, now is the time to revisit that Angel tribal deck. While it's true that synergy between Angel cards can feel a bit lacking compared to other tribal decks, there are plenty of ways to quickly play them onto the battlefield, and several, if not 3, strong options for their commander (shown above in order of popularity). All in all, there are enough Angels and angelic support nowadays for it to be a workable thematic choice, and the flavor is present in spades.