Last week Ghost Mourner & Moonlit Chill premiered in Eternity Code as the final – for now – entry in the 'Ghost Girl' series of hand traps. Do you remember when Ghost Ogre & Snow Rabbit debuted in Crossed Souls five years ago? At the time it was a novel tech choice: having a destruction effect you could play before your first turn totally changed the way players viewed Continuous Spells, Traps, and Field Spells. Ghost Ogre's coverage against monsters made it an interesting choice against Effect Veiler, and a worthwhile addition to any hand trap line-up that included Maxx "C".

Ghost Ogre's siblings were almost all exceptional hand traps. In fact, Ghost Sister & Spooky Dogwood's the only card in the series that hasn't seen serious competitive play. Ghost Reaper & Winter Cherries hasn't appeared in a Top Cut list in a while, but it still has the potential to wipe out your opponent's Extra Deck strategy, while Ghost Belle & Haunted Mansion also saw significant play last year. Meanwhile, Ash Blossom & Joyous Spring has remained one of the game's most popular cards. I've said before that I think Ash Blossom's one of the best cards ever printed, and over the years it's become the standard that all hand traps are measured against.

New hand traps are largely built on the shoulders of their predecessors. Cards like Infinite Impermanence and Ghost Mourner & Moonlit Chill are iterating on the power of Effect Veiler by introducing their own unique twist. Ghost Belle & Haunted Mansion acts as an alternative to D.D. Crow, and Ghost Sister & Spooky Dogwood features a punishment mechanic that's very similar to Maxx "C". But it's hard to make new hand traps appealing when Ash Blossom exists: the one-card solution to all your hand trap needs. As a personal critique I think Ash Blossom's a bit over tuned compared to other options, and too often conversations about hand traps end with "I don't have space for anything other than Ash Blossom and/or Infinite Impermanence."

So where does Ghost Mourner fit into the complex world of hand traps? It's not quite Effect Veiler, not quite Infinite Impermanence, and its burn effect is fairly unique. Ghost Mourner's already started showing up in online events as an addition to other forms of monster effect negation, and I think that'll carry over into in-person events when they return. It's differentiated in ways that make it uniquely capable of handling certain matchups, and that's more than enough reason for dedicated tournament goers to pick up a playset.

That said, I also think it's worth considering even if you're on a smaller budget.

What's A Normal Summon Anyways?
Ghost Mourner & Moonlit Chill's activation conditions are significantly more restrictive than Effect Veiler or Infinite Impermanence. You'll need to activate Ghost Mourner in the Summon response window – that crucial period immediately after a successful Special Summon. You can't wait for your opponent to activate an Ignition Effect, so you'll most likely end up chaining Ghost Mourner to an effect that triggers when that monster's summoned. The timing here is narrow, and it won't always be optimal for you to negate your opponent's monster right away.

In a best-case scenario you'll negate something like Crystron Halqifibrax or another Extra Deck monster, but at worst you'll end up holding Ghost Mourner uselessly against a Quick Effect. Picture this: your opponent Special Summons Dinowrestler Pankratops. If you activate Ghost Mourner in response to the summon your opponent can simply chain Pankratops' effect. You can't activate it early, and you can't wait either. That's a weakness that Infinite Impermanence and Effect Veiler don't have.

Of course, the biggest gap in Ghost Mourner's coverage is its inability to hit Normal Summoned monsters. There's room to debate whether that actually matters, especially given the power of certain Links. Cards like Halqifibrax make the case that targeting Normal Summoned monsters isn't always a priority, but that's not true of every match-up. You'll still want to shut down the effects of cards like Lady Debug and Adamancipator Researcher, but unfortunately Ghost Mourner can only target those cards if they're Special Summoned.

Ghost Mourner's competitiveness is closely related to the relative strength of Normal Summons. If a Normal Summon isn't contributing much to a particular strategy then there's no reason to waste resources on it. Ghost Mourner shines in matchups where you're already planning to wait until your opponent summons from their Extra Deck. Guardragons were an excellent example of that last year, and Halqifibrax combos that begin with Jet Synchron are better answered with Ghost Mourner than Veiler or Impermanence. It's not a huge difference either way – at least not when you're using Ghost Mourner defensively during your opponent's turn.

Both Effect Veiler and Infinite Impermanence have massive gaps in their coverage and activation conditions. You can't activate Veiler outside of your opponent's Main Phase, and Impermanence becomes a regular trap as soon as you commit a single card to the field. Ghost Mourner has neither of those drawbacks: it continues to be a hand trap regardless of phase or whether you control cards, which means you can use Ghost Mourner on your turn even as you continue to play out cards. It's an interesting advantage that gives it more in common with something like Forbidden Chalice, or an Impermanence that was already set.

Ghost Mouner comes up surprisingly often during your opponent's turn. You can activate it after Crystron Halqifibrax banishes itself to Summon a Synchro from the Extra Deck. You'll sometimes run straight into a Herald of the Arc Light, but you might also negate a Formula Synchron or T.G. Wonder Magician. Ghost Mourner's one of the best answers to I:P Masquerena when it Summons a Link Monster from the Extra Deck with an effect that activates on-summon, too. In other matchups, including Orcusts, you can negate a huge number of monsters that are Special Summoned on your turn. 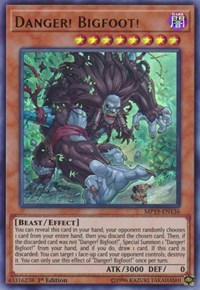 Does That Burn Damage Matter?
I try to answer three questions whenever I'm considering burn damage: first, is the damage enough to help me win the duel? Second, can I use the effect to easily score a win during end of match procedures? And third: will Life Point damage stop my opponent from taking some action?

The reasoning behind the first question is simple: burn damage is irrelevant if you can't reduce your opponent's remaining Life Points to zero. You only need 1 Life Point to win the game, so burning 7900 Life Points before stalling out is meaningless. You need to actually end the duel as a result of the burn damage, or in combination with direct and battle damage for it to matter. For the most part Life Points are a resource where you either have them or you don't. That's completely unlike card advantage, where having cards and the quality of those cards makes enormous difference in the state of the game.

The second question is a little less interesting to talk about. Put bluntly: if you're headed into Game 3 and you're expecting to play second you can go ahead and side Ghost Mourner to try to stop your opponent's plays. Most likely your opponent will leave their extender on the board to try and duck any damage that could cause them to lose the match if time's called before their first Battle Phase.

Ghost Mourner's super interesting because it has the potential to dish out significant damage simply as a bonus of its monster-negating effect. Targeting monsters with high ATK can remove a significant portion of your opponent's Life Points, and in the mid to late game you might actually win a duel or two through burn. Danger! monsters are a good example of high-ATK cards that Ghost Mourner wouldn't normally target, but you might decide to go for it anyways if your opponent's at or under 3000 Life Points. Let's face it: it's not hard to chip away a significant chunk of your opponent's LP early in the duel. Accesscode Talker, Borrelsword Dragon, and a host of other Extra Deck monsters with huge ATK can quickly bring your opponent's Points into striking range.

Life Point expenditures aren't as common in this format as they've been in the past. With Destrudo, the Lost Dragon's Frisson now Forbidden we're not seeing as many cards with Life Point costs in tournaments. Ghost Mourner can punish a deck with a full line-up of Solemn traps, but they're fairly rare these days. The decks that are playing Solemns are almost universally playing low-ATK monsters anyways. Ghost Mourner's burn effect has long-term potential against high-ATK strategies, or trends that put Life Point costs back in the spotlight. There will certainly be match-ups where Ghost Mourner's simply the best option, but the relevancy of those matchups matters.

I think Ghost Mourner & Moonlit Chill will continue to show up periodically as we head through the summer, but I'd be surprised if it overtook Effect Veiler completely. Infinite Impermanence is untouchable, and Ash Blossom's only replacement these days is Droll & Lock Bird. That said, Ghost Mourner's your best bet if you absolutely need nine hand traps that negate monsters, or twelve if you're playing PSY-Framegear Gamma. That might seem like overkill, but Yu-Gi-Oh players never cease to amaze me with deck lists where nearly half of the cards are hand traps. I don't think Ghost Mourner will struggle to find a home with those competitors.