A new set, new cards, and some spicy reprints. Where does that leave Standard now?

New set releases are some of the most exciting times in both competitive and casual Magic. People get to add new cards to their deck, brew new decks, and experience a completely new Limited format. In my case, I typically look at Standard before any other format. I am known for adapting established tier 1 strategies when a new set releases, however with the release of Core Set 2021 I'm interested in taking Standard in a different direction.

There were a handful of directions you can take an Izzet deck in the current Standard: Izzet Phoenix, Izzet Tempo, Izzet Prowess, and so on. I started off with a list from Adam "Yoman5" Hernandez's deck dump last week because Stormwing Entity caught my eye. His initial list felt like a strong tempo deck, however I was more interested in getting more aggressive by utilizing prowess and "prowess-like" cards.

This deck wants to build up to an explosive turn that is game-ending (or close to it). This typically revolves around getting a Sprite Dragon or Stormwing Entity in play. Riddleform and Brazen Borrower can also be impactful creatures for dealing damage over a handful of turns.

Set up and basic cantrip philosophy changes greatly in this version of a prowess deck. Typically, you would Opt on your opponent's end step if you had mana open. In this deck, it is important to hold on to your Opts and other spells with a converted mana cost of 1 so you can cast Stormwing Entity for cheap. 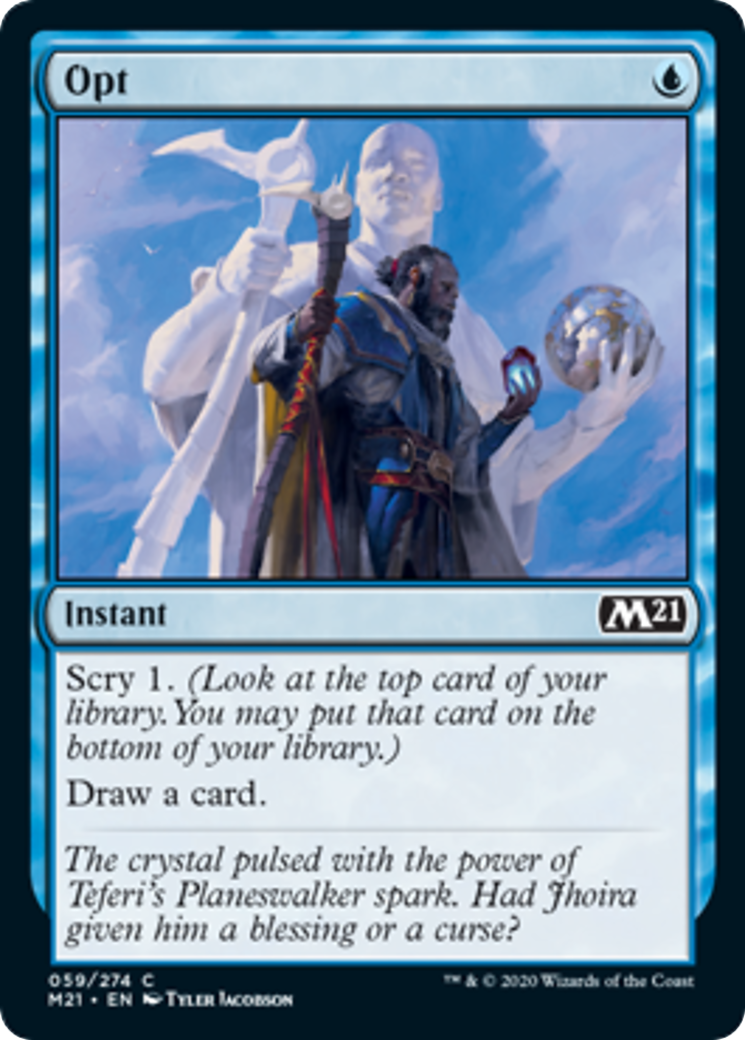 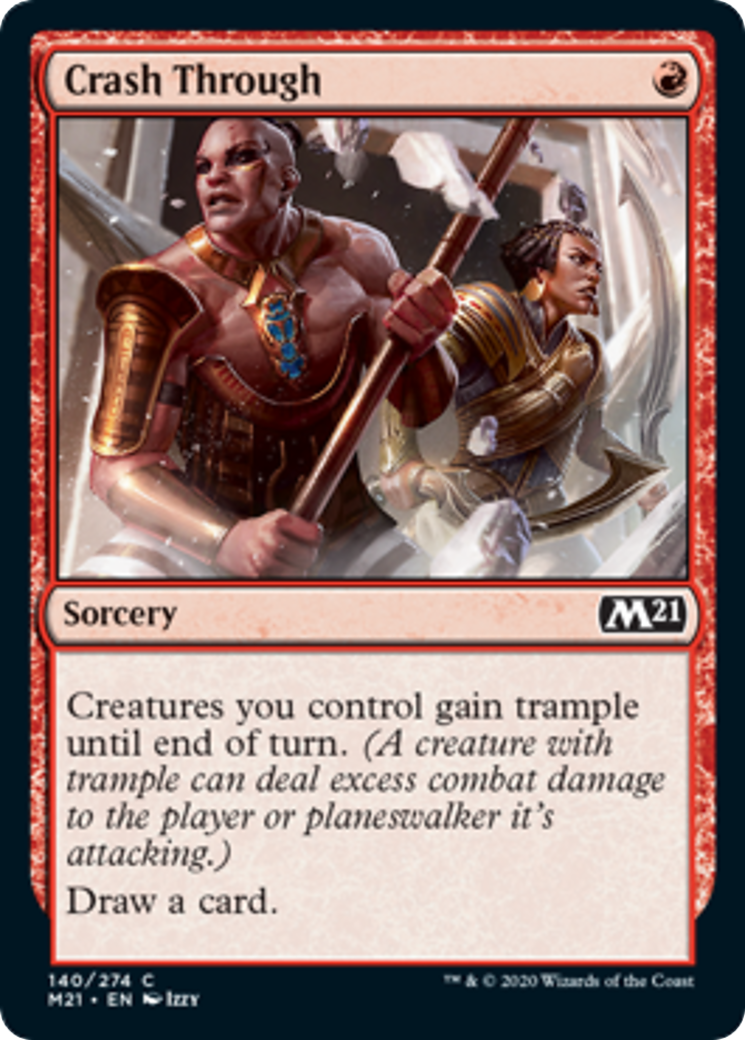 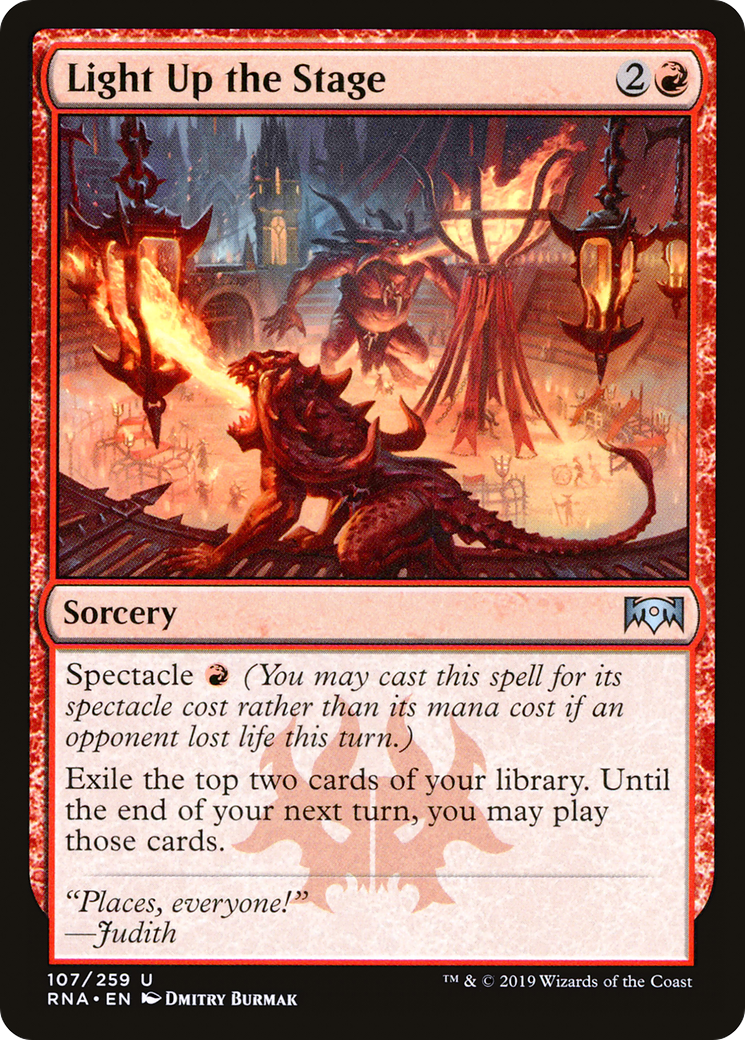 My most recent additions to the deck were Frantic Inventory and Light Up the Stage. I found myself running out of things to do in the late game, or having too many creatures and not enough spells in my deck. Both of these cards have been phenomenal in both generating explosive, game-ending turns and grinding out longer games against midrange and control decks.

There are a ton of creatures that could fit into a deck like this, such as Pteramander or Arclight Phoenix, but I wanted to streamline the prowess theme to enable efficiency and consistency. In the current configuration of the deck, you typically always have one to three creatures and a handful of cantrips. 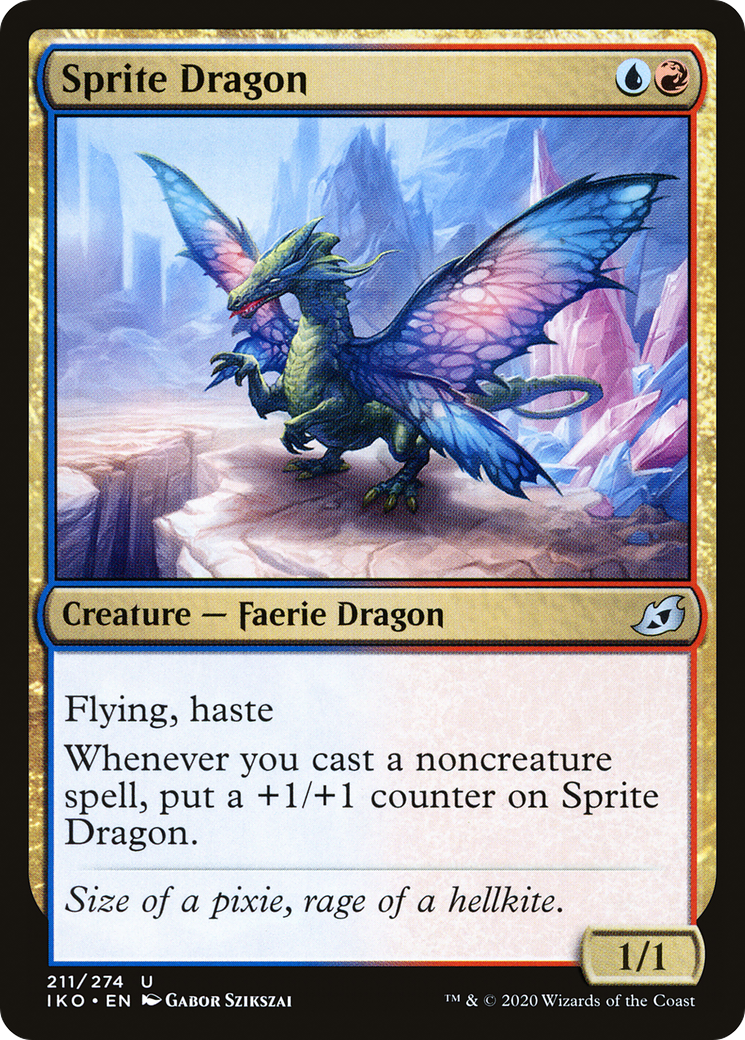 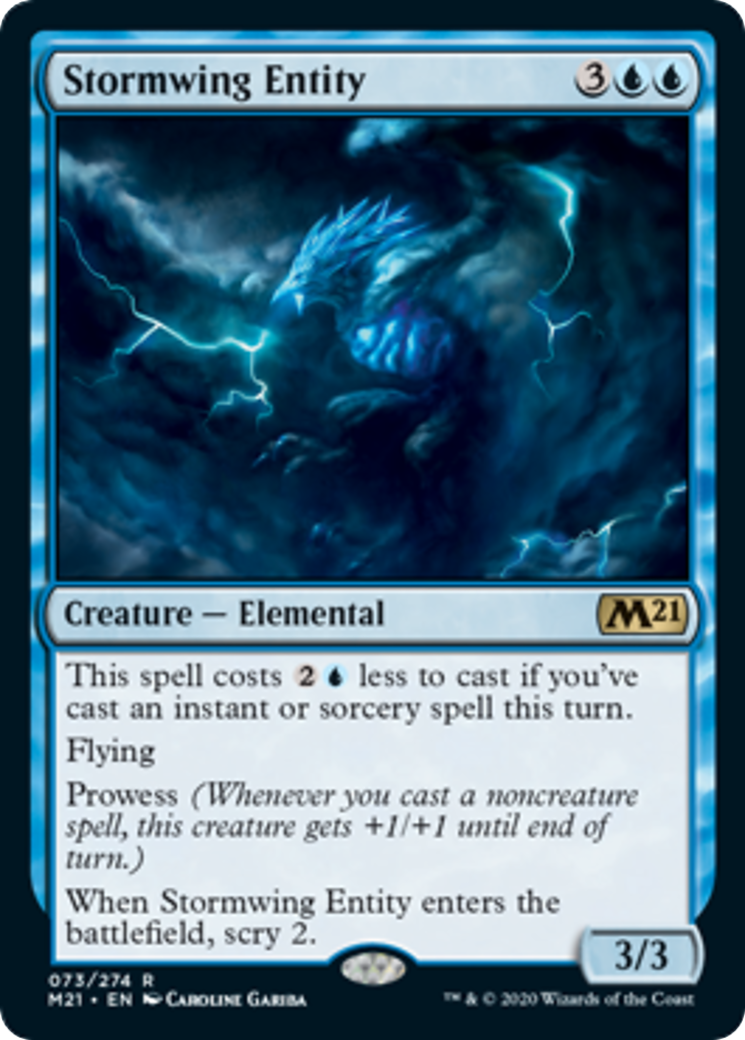 Sprite Dragon was one of my favorite cards when Ikoria was released, but it didn't have enough support to find a home in a new archetype. Stormwing Entity is truly the card that this archetype needed to push through into a meta deck. It is already a 3/3 with flying and prowess for essentially two mana, but on top of that when it enters the battlefield you get to scry 2. This is important because you get to shape your next couple of turns, whether that be starting a cantrip chain or finding a backup creature if you expect a removal spell from your opponent.

Petty Theft and Shock are your maindeck ways to interact with your opponent. Largely, in game one I favor being the proactive strategy at the table, so I've left the countermagic and other forms of interaction in the sideboard. However, both Shock and Petty Theft can play into the proactive game-one strategy by removing creatures to swing in for lethal, and Shock can also hit your opponent's face, all while triggering prowess! Riddleform is a spell I was unsure of including in the deck at first, but it has been overperforming in almost every match I've played it in. Casting a second Riddleform triggers the initial Riddleform, and you can trigger Riddleform on your opponent's turn if you are in need of a good blocker. Being a flier directly supports your game plan, and being a 3/3 also makes it a solid blocker against some aggro decks.

Raking Claws is a great "game one card" that can win you games early or win a game out of nowhere. Otherwise, this card often comes out in the post-board matches.

We still don't completely know how the format is going to shake up with M21, but here are a few matchups I've seen on MTG Arena so far.

The goal against Bant Ramp is to win the game before the Bant player can stabilize with Shatter the Sky or Uro, Titan of Nature's Wrath. Therefore, I would bring in cards to deal with Teferi, Time Raveler and Uro. Riddleform is very good in this matchup because it dodges Shatter the Sky. 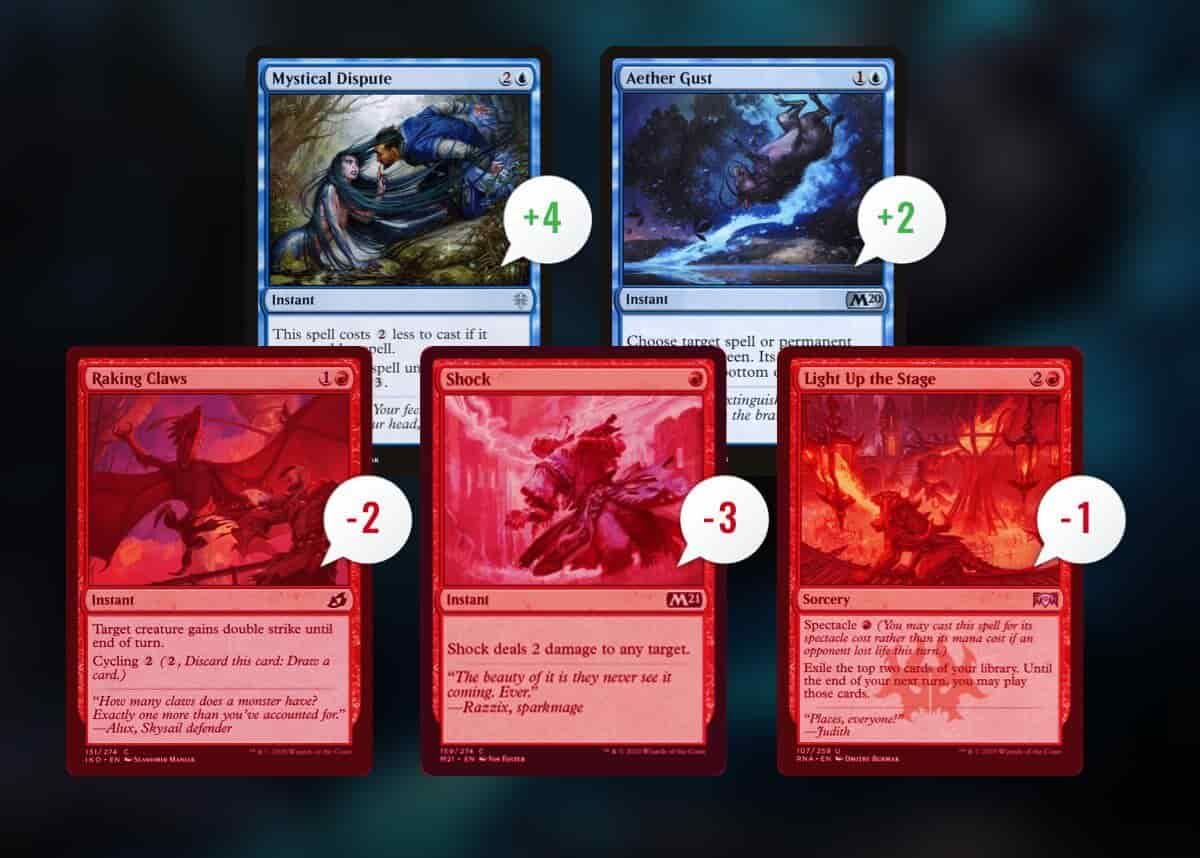 Mono-Red Aggro was a difficult matchup initially, so I added more removal in the sideboard. In this matchup you want to control their board presence while putting on your own pressure. Game one you only have access to Brazen Borrower and Shock as interaction, so you often have to race your opponent. In the post-board games you get to slow down by controlling their board presence and attacking with one or two creatures a turn. 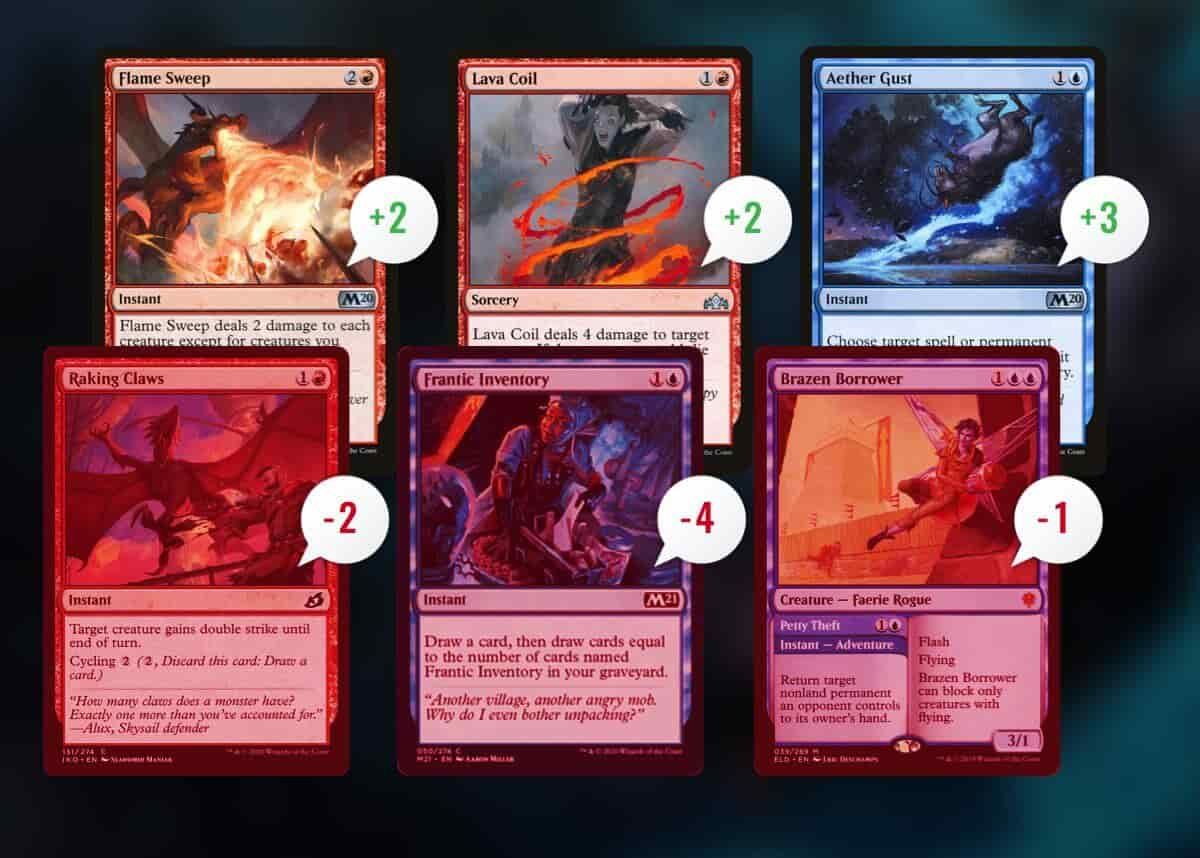 I haven't gotten to test this matchup yet, but we don't have enough ways to interact in game one, so it's going to be a race to kill them first. In the post-board games we get a lot more tools to interact with the opponent and play more of a tempo game by applying pressure with one creature while holding up interaction. 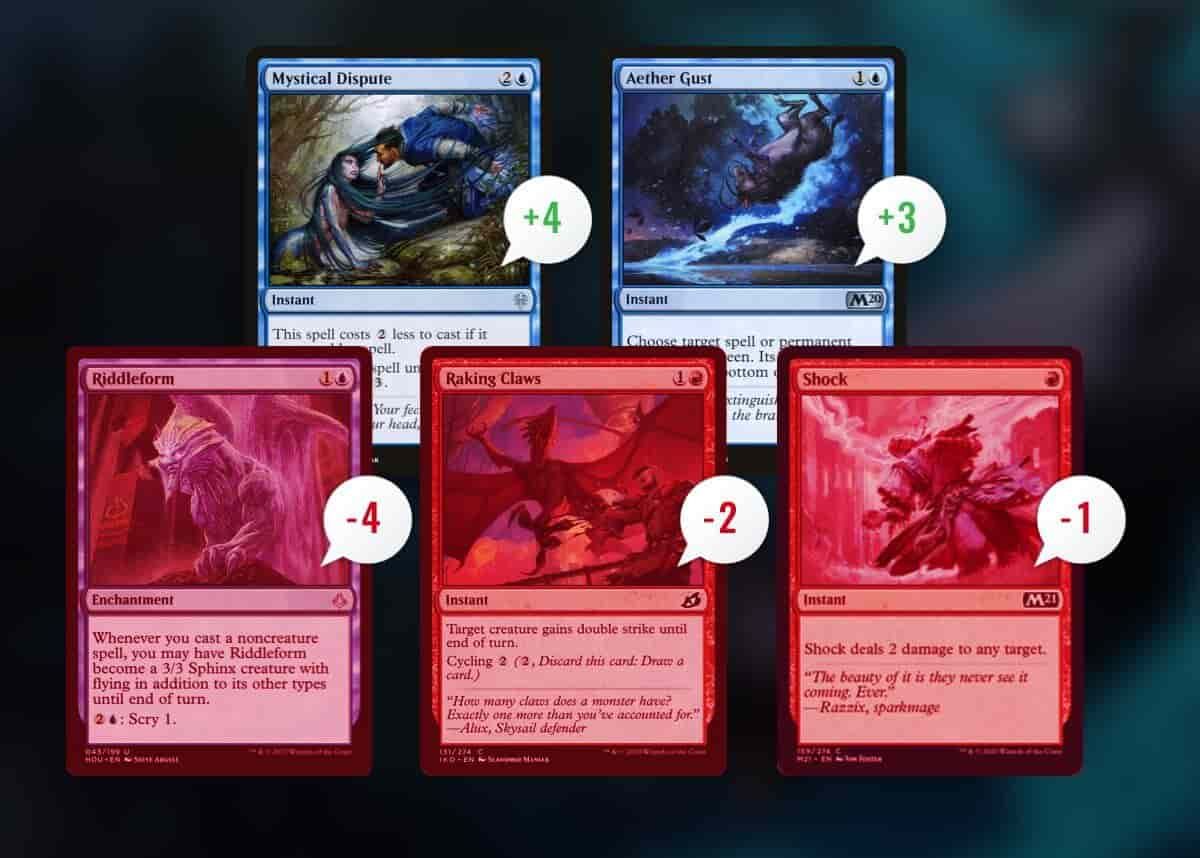 Sacrifice decks are still a big part of the meta. That's good for us, because all of our creatures fly, we are a quicker deck, and Stormwing Entity can't get hit by Claim the Firstborn (Sprite Dragon can though, so watch out!) Tormod's Crypt is a great card to enable prowess and hurt sacrifice decks. Lava Coil and Flame Sweep are still really good against these decks as well. 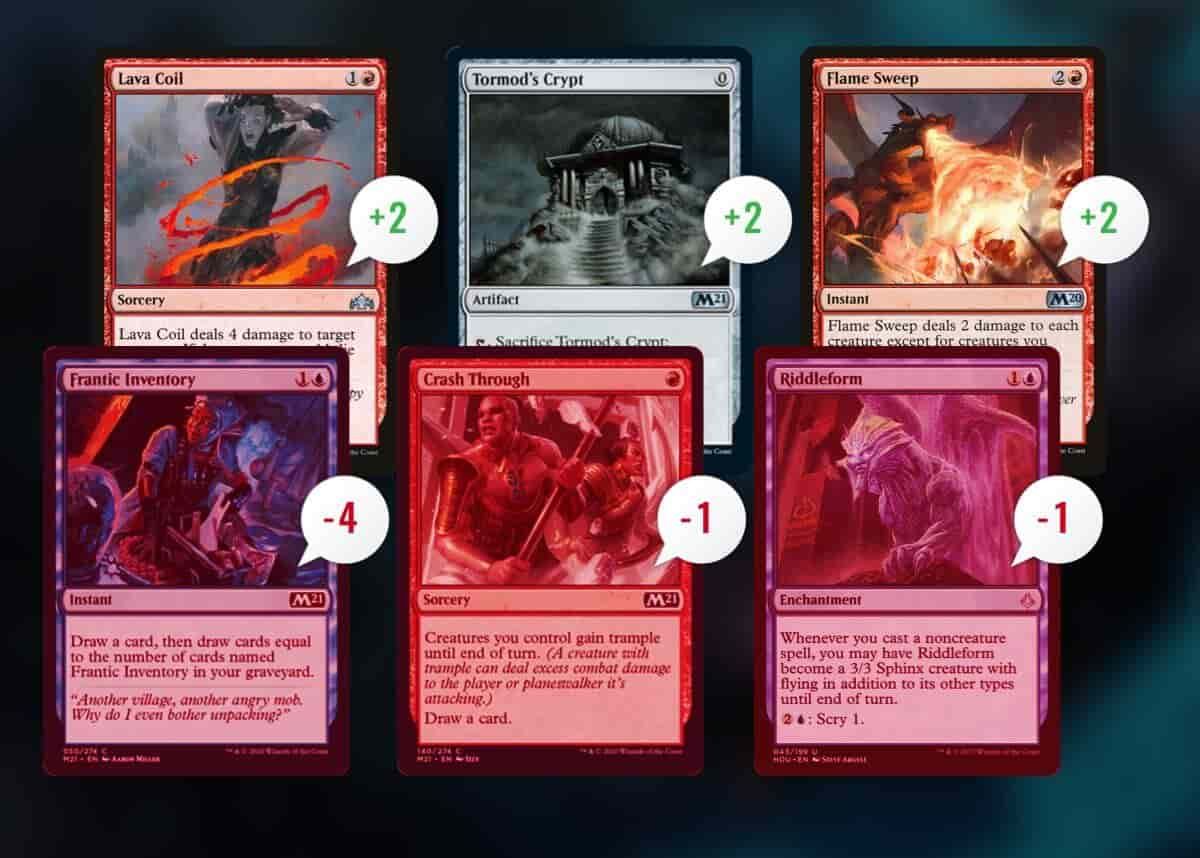 Simic Ramp is a new deck that centers around casting Ugin, the Spirit Dragon as early as turn four. Luckily, we can often outrace the Ugin and they don't have many ways to interact with us in the pre-board games. After sideboarding, we can still race, but we want to be sure to hold on to Aether Gust for potential Shifting Ceratops.

If this deck becomes a tier 1 deck, I would look at sideboarding Lofty Denial instead of Mystical Dispute to have a more effective counter against Ugin, the Spirit Dragon. If we assume our opponent is bringing in countermagic, we should also bring in Mystical Dispute. Mystical Dispute can always counter Ugin if necessary. 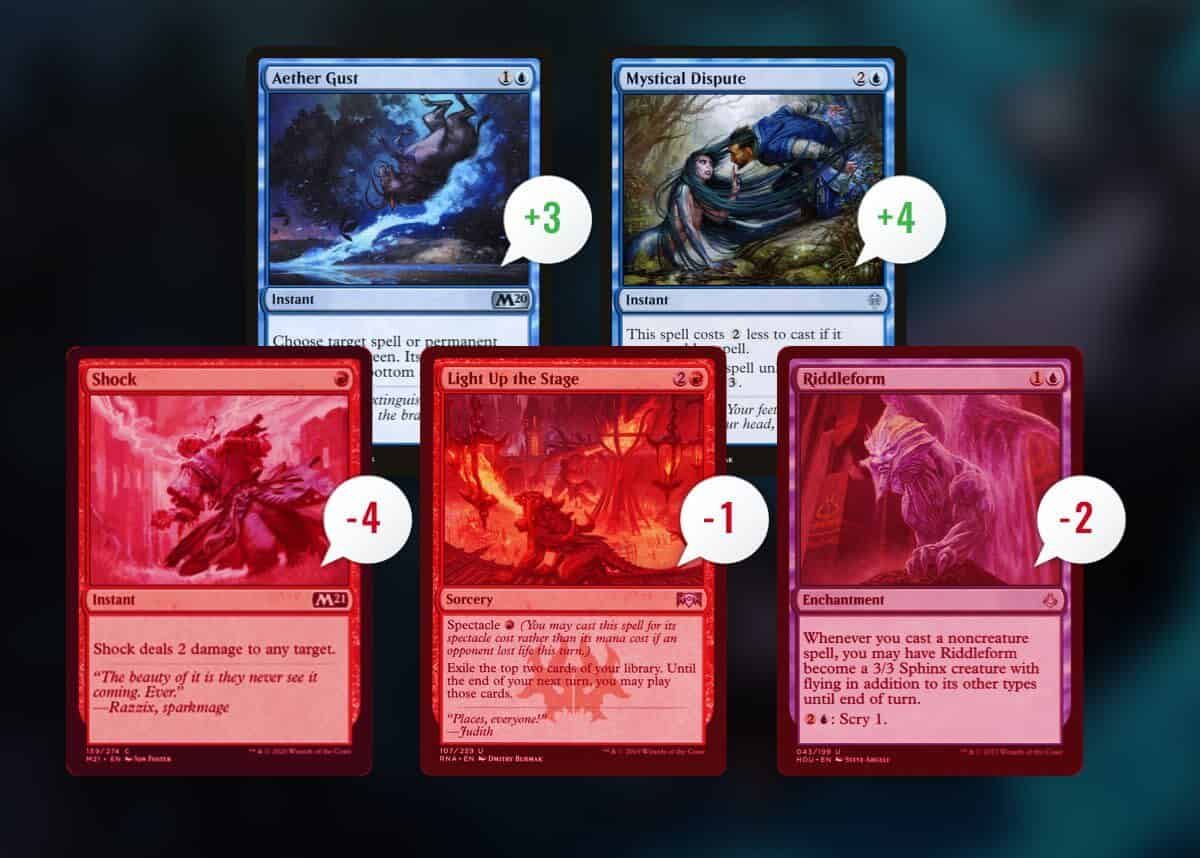 Note: Soul Sear is in the sideboard for some decks playing the Theros Gods, as well as any planeswalkers you feel like you otherwise cannot deal with.

While this deck is still new and less explored, it has felt extremely powerful and resilient in my testing. I've been beating old tier 1 decks as well as Simic Ramp, so Izzet Prowess definitely has a spot in the new metagame. Aggressive decks tend to perform especially well in the first few weeks of a new meta, so if you're looking to rank up on the Arena ladder or do well in an event, look no further. Plus, who doesn't love to cast a bunch of spells?