With Grand Prix Milwaukee - one of the scarce Limited Grand Prix this year – coming up this weekend, I felt the need to sharpen my skills and explore the Sealed Deck format. After the Pro Tour with the introduction of leagues on Magic Online, I've been playing a fair amount of triple Kaladesh. I haven't had the opportunity to do that many Sealed events, and it's always a good idea to at least see how Sealed events play out even with a vast amount of comfort within draft. Today I want to share three separate Sealed Leagues in their entirety and what I've learned from them.

Having an efficient curve is always going to be useful in Limited. In this format in particular there are several factors as to why curve emphasis is more of a necessity both offensively and defensively.

Vehicles are undercosted threats that hit harder than creatures of the same cost. They want to attack since they block rather poorly. Most crucially, Vehicles require you to tap another creature which means you are more committed to an offensive strategy when utilizing a vehicle; you also have incentive to have enough cheap creatures to crew vehicles most effectively.

You need to make plays on time and can't miss a beat, whether it's with your vehicle or your opponent's. One of the best ways to combat vehicles is by being aggressive yourself. Because it takes tapping creatures to crew vehicles, in some games this means all creatures the controller of a vehicle plays essentially enter the battlefield tapped. This creates many racing situations.

As I will discuss later, there are a healthy amount of powerful late-game energy cards. While you may be an energy deck yourself, it's still important to be able to pressure your opponent with a strong curve. This will prevent them from assembling game winning late-game energy shenanigans. 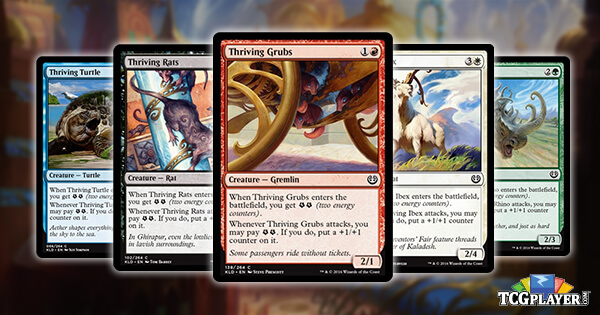 The common Cycle of thriving creatures like Thriving Rhino are all solid playables that have the potential to snowball the game. While you don't see many non-Red-Green Energy beatdown decks like you do in Draft, these cards are available in many Sealed pools and are often played. 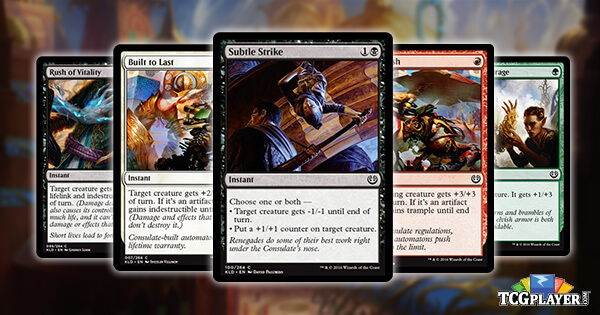 In this format more than any I can remember, the combat tricks are all of a high power level. Generally, you are not happy with the inclusion of tricks in a Sealed deck. They are low impact and you want to have powerful spells to grind out games and play or remove bombs. People have a higher amount of removal in Sealed than in Draft, so combat tricks come with increased liability of getting blown out. However, in Kaladesh all the combat tricks are just genuinely strong cards with a variety of functions while many also provide protection. Rush of Vitality, Built to Last, Subtle Strike, Blossoming Defense, and Ornamental Courage can all be good against removal as opposed to weak to it. Combat tricks being stronger than normal increases the appeal to be aggressive and further rewards a having a strong curve. Trading a Built to Smash to take out a four-drop and deal some extra damage is a great way of getting the most mileage out of a mediocre pool. 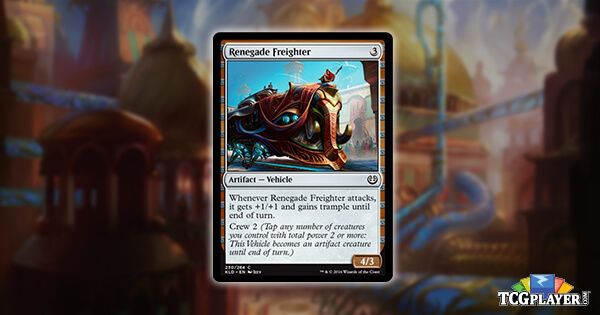 Make sure that you build your deck in such a way to beat a turn three Renegade Freighter. Around 60% of any sealed pools will contain any given common. Essentially, over half of the decks you play against will contain Renegade Freighter. This is a contributing factor in regards to needing a solid curve in this format. Not only do you need to potentially support your own Freighters (or other aggressive cards for that matter), but also you need to fight against them. If your deck is soft to it, it could be best to maindeck a card like Fragmentize, Select for Inspection or Ruinous Gremlin (generally speaking these are not cards I main deck).

Furthermore, you should play most games to optimize against it if possible. I lost a game where I opted to play my Embraal Bruiser instead of my Dhund Operative on turn two when I had an aggressive hand. My opponent had a two drop and followed it up with Freighter and that was all she wrote that game. As stated above, don't completely eschew curve for raw power.

I think this Sealed format is a bit slower than people are making it out to be. It might seem odd that I'm making this statement after putting the utmost priority on having a strong curve, but I have found that you shouldn't totally eschew playing slower powerful effects in order to have a stronger curve.

Have a good curve, but understand this format still has many effective slow decks with late game powerful effects that take over games. All the very best sealed pools I have seen are not one dimensional beatdown, but decks with potent cards with a good enough curve to be aggressive when needed but still have a late-game plan.

Understand deckbuilding choices so that you can build an aggro deck that puts right type of pressure on more controlling decks. This often comes up in sideboarding but can come up for your maindeck itself. For instance, instead of playing more Eager Constructs and Sky Skiffs to make give yourself a better "curve," try playing cards like Whirlermaker, Torch Gauntlets or Ghirapur Orrery as punishers when you assume the role of the faster deck.

Blue is the color that many people seem to debate over in Kaladesh draft. Some love it, some hate it. It all comes down your willingness to go flashy versus utilizing a more straightforward game plan. Blue has an extremely weak spread of commons and uncommons when put in a vacuum since they are almost unanimously based on synergy. Without a draft, you have no control over the cards that end up in your pool. Blue is usually an energy support color, but with a random slate of blue cards it just never seems to be good enough. In one of my builds, I considered the possibility of blue being a main color, since my two Malfunctions were my only hard removal spells in the entirety of my pool. Do yourself a favor and avoid blue unless you open a bomb.

While the filler is disjointed, blue has some of the best rares in Kaladesh. Confiscation Coup, Saheli's Artistry and Aethersquall Ancient are all completely busted. There are several multi-colored cards worth splashing such as Cloudblazer, Rashmi or Dovin Baan. If you are lucky (or unlucky?) enough to receive a spread of rares with support, don't count Blue out. Just beware. 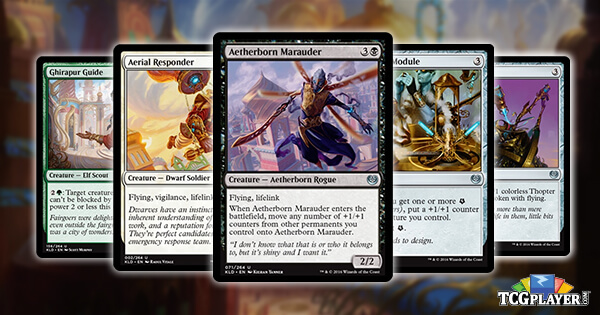 I've found board stalls to be rather common. Most of the rares are slow and won't kill you immediately. When everybody is building to optimize curve, this often results in trades and an eventual stalemate as no player really gains momentum.

Interestingly enough, these stalls often don't drag on as there are a multitude ways of being prepared for such situations. For sealed, cards like Ghirapur Guide are much more acceptable than in a fast and synergy based draft format. Powerful late-game effects such as graveyard recursion or large creatures are more also more valuable.

Flyers are extremely good. You know this, everybody who plays Limited knows this. So what's the big deal? A color may be better than you think due to the presence of flyers. For example, I have found Aerial Responder and to a similar extent Aetherborn Marauder to be bomb-like in the sense that I win a high percentage of games where they get cast. If I end up playing white (which happens often in this format), I would almost always play Skyswirl Harrier unless I absolutely didn't have room or need something else for my curve. Furthermore, you may be inclined to play an Eddytrail Hawk in a non-energy deck or in a straight control deck to give you the ability to beat a stall.

Modules are an excellent way of overpowering your opponent. Fabrication Module should make almost any deck even if you are low on energy production/sinks. I have won and lost many games to it. Consider also playing a card like Animation Module even if you are only have six creatures that gain counters. This card is a bomb and I'm willing to get greedy and play it with less enablers than would be typical. Even Decoction Module can be great, though this one I think wants you to actually need the energy to make it worth it. The ability to provide value and infinite chump blocks can prolong games, with utility to blank removal spells and freely save creatures pacified by Revoke Privileges or Malfunction. Another example of an excellent Sealed card here and an honorary module is Durable Handicraft.

Take advantage of what you can do to make your deck more powerful in the grindy sealed metagame.

It's pretty apparent how to build a deck that is late-game oriented. There are several cards that provide huge insurmountable card advantage swings. When everyone is building for curve, you can actually get an edge by going a bit bigger, so to speak. Notably, Midnight Oil is a bomb, Wildest Dreams is strong enough to splash and Tezzeret's Ambition is solid. Most of these cards you are unhappy to open in a Draft, but in Sealed you should be excited and consider these types of cards as color incentives. Eliminate the Competition and Captured by the Consulate are other examples of some potential unsung powerhouses. There are a large percentage of rares that are excellent in Sealed, which makes for many powerful pools.

A general rule of thumb for playing any type of Magic. I thought I'd bring it up after I became a bit frustrated during some gameplay during the Workshop. There are a lot of bombs in this format, especially considering how many rares become empowered by its sluggishness. A cycle of Gearhulks, four Planeswalkers and that's just the beginning. Play with what you have, and don't let what your opponent has frustrate you and become an excuse. I have had almost all my pools be playable or better, there just are many powerful cards to play with. Most of these cards are beatable, so it's incredibly important to maintain focus when facing one down. As happened in my video, becoming emotional about things that are out of your control can lead to miscues. Sealed is only all luck if you consider it so, play tight in the face of bombs and have your opponent walk away baffled at their loss.

This was a bit different from my normal column, so please let me know if you benefit from this type of content and what you think!