While a majority of the cards that have been spoiled are multicolor, today's card not only hails from the aforementioned Sultai clan, but is also a monocolored card.

In order to properly introduce today's card, we have to look at what good black cards - specifically creatures - traditionally want to do. Black is always trying to squeeze every last point of value from its creatures, and often this falls under two categories: trading life points for cards and trading creatures for more creatures. Black is kind of like the Hank Scorpio of Magic colors, only less generous. 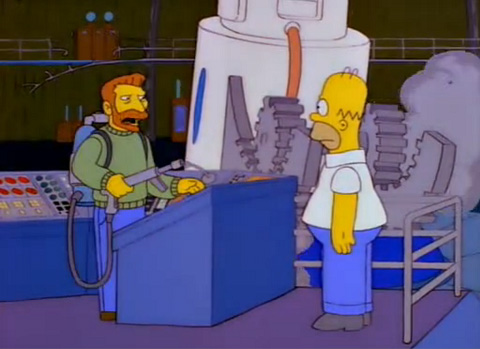 "But Homer, on your way out, if you want to kill somebody, it would help me a lot."

Yeah, kind of like that. It might not have been the first time we saw this theme, but one of the most popular times came straight out of Onslaught. Quite fitting when you consider Khans of Tarkir is a set that is bringing back both fetchlands and morph, two "mechanics" that originated in Onslaught.

Creature types were a huge theme in Onslaught block, so getting a 2/2 zombie every time a cleric went to the graveyard was actually pretty solid. You'd be lucky to get another zombie for a creature other than the Rotlung himself nowadays if we still had to rely on clerics dying. I don't even remember the last time I saw a cleric in modern Magic.

I guess Centaur Healer is a cleric.

Okay, so there are a few sweet clerics. That's not the point. Do a search for humans in Standard and then see what turns up.

Well this guy shows up for one thing.

Moving forward a little bit, we see that the most recent incarnation of Rotlung Reanimator requires that a human die, and not specifically a cleric. This is a much more open qualifier and, printed near a block like Innistrad that had a high human theme, he fit right in. The notable difference is that the zombies now come into play tapped representing the slow, lumbering nature of the undead.

But I'm getting off track. The point is that black cards love to provide us with cards that produce value...once a cost is paid. Today's preview card is no different, extracting every point of value out of its fellow creatures. Only the value we receive isn't in the form of creatures… 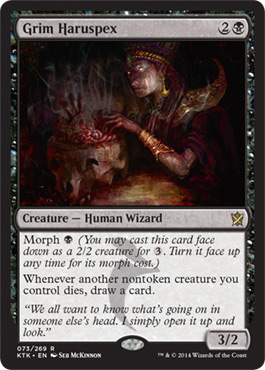 Ah, another human! Another human wizard at that. An esteemed pedigree containing the likes of Dark Confidant, Snapcaster Mage, Grim Lavamancer, and so on. Well, just as Xathrid Necromancer (another human wizard) is on his way out the door with M14, Grim Haruspex has arrived. Some of you might be wondering what a "haruspex" actually is. Well, let's see what Dictionary.com has to say about it.

[huh-ruhs-peks, har-uh-speks]noun, plural haruspices[huh-ruhs-puh-seez]1. (in ancient Rome) one of a class of minor priests who practiced Divination, especially from the entrails of animals killed in sacrifice.

That makes total sense actually, especially considering the flavor text. This is one creepy dude. And just as Xathrid Necromancer is on his way out the door with M14, Grim Haruspex has arrived. This is the replacement the black aggro deck of the format was looking for. With a mana cost of three, I don't think we need to cast this guy as a morph very often, but it's nice to know that we can. The reason this is nice is in case a) there are several other morph creatures that could potentially make our aggro deck and the variety could throw off our opponent, or b) we simply don't want our opponent to realize that when he wraths the board, we're going to draw three or four cards.

The best part about Grim Haruspex is that he allows us to overcommit into sweepers and forces our opponent to deal with the Haruspex on its own before wiping the board. While I wish his ability triggered when he himself died, this shouldn't really be a negative when we're loading up the board with creatures like Gnarled Scarhide, Tormented Hero, and Pain Seer (a couple of which also double as forms of card advantage as well).

This is a card that is looking for morph creatures, making each equipped one a 4/4. If we're playing cards like Grim Haruspex anyway, maybe there's a couple more morph creatures that might make the cut, and maybe the Ghostfire Blade is looking much more appealing; +2/+2 for a single mana is a pretty decent deal after all, especially since the Haruspex flips for only a single black, turning the human wizards into a massive 5/4.

These interactions I'm mentioning don't even take into consideration something like a sacrifice outlet. One of the best I'm seeing currently is the likes of Tymaret, the Murder King. Being able to pay two mana and off a creature to deal two damage to a player and draw a card isn't that bad of a deal. Especially considering you're just replacing the sacrificed creature.

I have little doubt that Grim Haruspex will not only see play, but will be a staple in whatever Monoblack Aggro list that might pop up once Khans of Tarkir becomes legal. We already had an incredible staring point in Theros Block that we saw at Pro Tour Journey into Nyx.

This is a great example of a deck that Grim Haruspex would fit perfectly into but seeing as every form of the human wizard - morph and hardcast - costs three mana, we would probably want to shave a few three drops off the top end.

Ultimately I see Grim Haruspex being as much of a staple in aggressive decks (black or otherwise) as his counterpart Xathrid Necromancer was before him, which could pair him with anything from white, to red, to blue.

Grim Haruspex was a pretty sweet preview and I can't wait to see where it fits into the upcoming Standard format. Tonight I leave for Seattle to compete in the 2014 Magic Online Community Cup. This is where myself and a bunch of other prominent members of the Magic community battle with members of Wizards R&D in a bunch of awesome and obscure formats. How does this affect you? Well, the entire event is going to be live streamed all weekend long. If those aren't enough hyperlinks for you, I don't know what to tell ya!