Thanks to Wizards of the Coast for giving me an amazing preview card for the upcoming Magic: The Gathering set, Kaldheim. Let's take a look at Kolvori, God of Kinship and its reverse side, The Ringhart Crest. 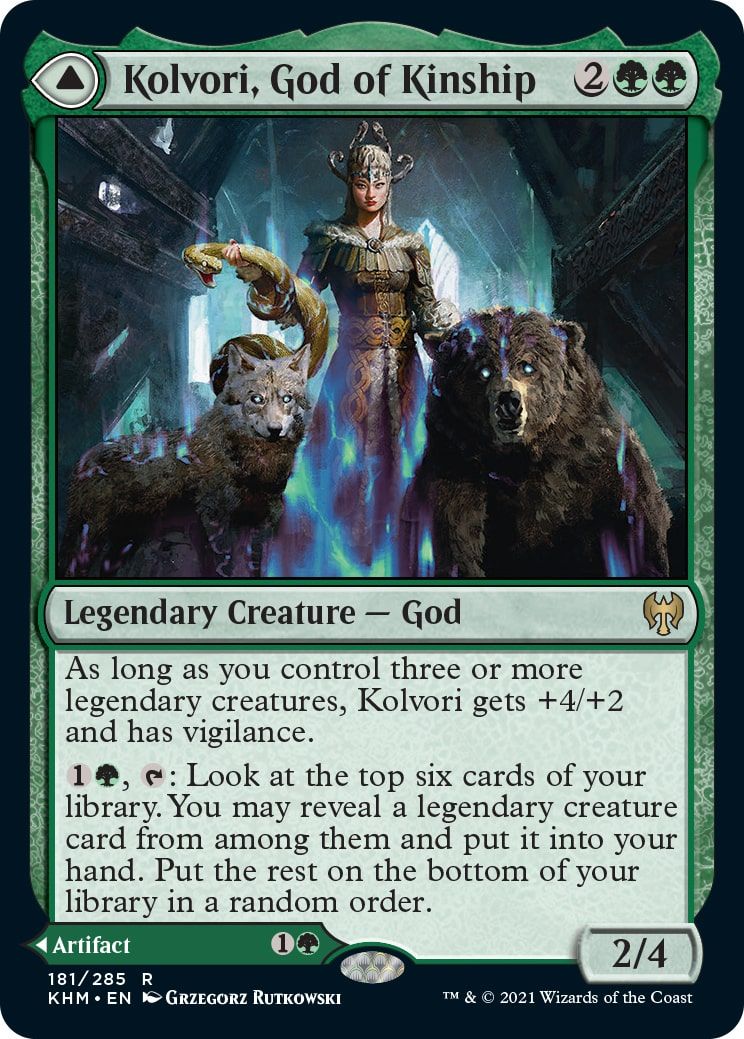 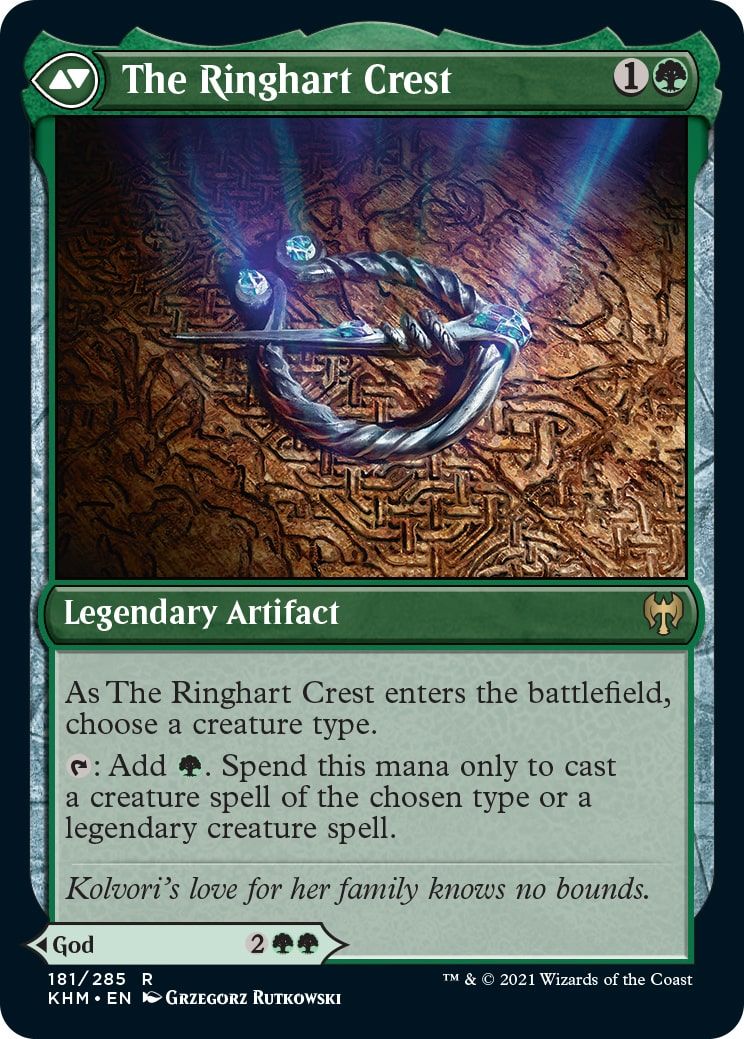 Can we even call this just one card? It's a modal double-faced card (MDFC), which means you have the option to cast it as either of its two sides. We first saw MDFCs in Zendikar Rising last September, but we've never seen MDFCs where both sides were spells—until Amon Amarth showed us the first God of Kaldheim, Halvar, God of Battle. Like Halvar, Kolvori is a mono-color MDFCs with a God on one side and an artifact on the other.

Let's see what it has to offer!

We'll start with Kolvori's God side. You may notice that Kolvori isn't indestructible, and won't go back into your deck when it dies. In that sense it is vulnerable compared to previous Gods, but I suppose that is the sacrifice you must make to be double-faced.

Kolvori will range from unplayable to amazing, depending on the amount of legendary creatures in your deck. It's almost like a legendary tribal card in a way. It does count itself in order to pump up and become a big ol' 6/6 with vigilance, so that means we are looking for two other legendary creatures to go alongside it.

The challenge is that very few existing decks have only legendary creatures. The hope is that there will be more legendary creatures printed in Kaldheim, and there are certainly some in color options already available. The cheaper legendary creatures go especially well with Kolvori, because you can potentially play it already pumped up by turn four. Standard-legal creatures that could play well alongside Kolvori include:

There are of course many more, but these are a few of the more powerful options you can play alongside Kolvori in Standard, most of which are on-color. My expectations are high that we'll be able to build around Kolvori, as the power level makes it worth it.

Beyond the potential of having a huge creature, we also get massive card advantage through Kolvori's ability. Two mana to look at the top six cards of your deck and take the best creature out of those cards is an amazing repeatable effect that further emphasizes the need for plenty of other legendary creatures to play with alongside Kolvori. Assuming there are lots of legendary creatures in your deck, you are very likely to hit at least one option to take in the top six cards, and oftentimes it will be more than one. Beyond that, you can activate this ability after you have attacked with Kolvori, if it has been pumped up.

I would honestly be excited about Kolvori by itself if there was no other half to the card, so I'm very optimistic about this card. It could even make a splash outside of Standard. Certainly once you get to Historic there are lots more legendary creatures—imagine a Selesnya aggro deck with creatures like Isamaru, Hound of Konda, Shanna, Sisay's Legacy, Emmara, Soul of the Accord, and Trostani Discordant as additional options.

The Ringhart Crest fits perfectly alongside of Kolvori, God of Kinship. This is another card that pays off big time if you build a deck with lots of legendary creatures. Mana rocks are attractive, but one that only works for certain spells looks a lot worse. This is definitely the less powerful of the two sides, but is still going to be useful. If you either don't have a two-mana play or are in need of more mana, playing The Ringhart Crest instead of Kolvori will often be correct.

The Ringhart Crest won't help you with noncreature spells, so optimally this goes in a creature-heavy deck. In the right list, though, it'll ensure you have the mana to cast all your beefy green creatures. If you happen to run one or more nonlegendary creatures, you can account for that by naming their creature type when you cast the Crest.

It's a shame the Crest only produces green mana, but I don't think we can be too picky considering this is a double-faced card. I expect The Ringhart Crest to enable plenty of turn-three plays like Questing Beast and Kolvori, which is exactly what you want.

The Hidden Advantages of Double-Faced Gods

Unlike many legendary cards, it is going to be a bit safer to play the full four copies of Kolvori. When you play four copies of cards like Questing Beast, there's always a risk that you'll draw a useless second copy while you have your first copy already in play. But if you have two copies of Kolvori in your opening hand, you can play The Ringhart Crest on turn two, and then follow it up with a turn-three Kolvori. Pretty impressive.

The other reason to play four copies of Kolvori is that in the decks where it's good, it may well be the best card in your deck. Maximizing your chances to draw your best card by having the maximum amount of copies makes a lot of sense.

The other benefit of modal double-faced cards with flexible mana costs is they can help prevent mana screw. Having the option to be either a ramp spell or a threat is massive. Ramp decks usually struggle when they draw too much ramp or too much action, and here we have the option to be either. That flexibility is going to smooth out your curve all on its own.

If the rest of Kaldheim turns out like the cards we know about so far, there is plenty of reason to be excited. This might be the strongest card I've ever had the privilege of previewing, and I just hope that there are enough legendary creatures to be able to build around it. This is the type of card that could shake up Standard significantly, because it isn't meant as an upgrade to a previously established deck—it's designed to create a new archetype.