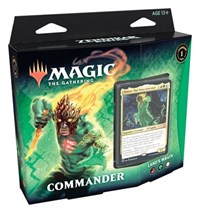 Land's Wrath includes the makings of a solid landfall deck, but it does have some upgrade opportunities. An obvious omission to the decklist is Avenger of Zendikar, which is found in Reap the Tides. Another omission is Fall of the Thran, part of a three-card infinite Landfall combo with Emeria Shepherd and Evolution Sage. Due to its low price point and synergy, WotC could have easily added Fall of the Thran to the deck.

With a market price of $15, Land's Wrath is priced well for its power and utility. As an investment opportunity, I predict the market price for Land's Wrath will remain under $30 over the next year. Land's Wrath does not offer any compelling cards that may drive demand higher. While there are probably better MTG products to invest in, Land's Wrath is an inexpensive addition to any Commander collection. 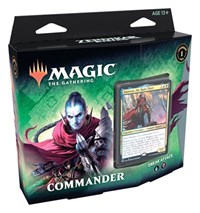 Similar to Land's Wrath, there are two other exclusive cards in Sneak Attack. Enigma Thief is a potent Sphinx Rogue when cast for its prowl cost. Whispersteel Dagger is an exciting Equipment that pairs well with Syr Konrad, the Grim, one of the few non-Rogues in Sneak Attack.

For $20, Sneak Attack offers a fantastic 100-card Rogues deck. There are many opportunities to upgrade Sneak with affordable creatures and spells from Dungeons & Dragons: Adventures of the Forgotten Realms, Zendikar Rising, and other sets.

As a tribal deck with potential, I believe Sneak Attack is ripe for future appreciation. When supply ultimately dries up for Sneak Attack, we could see its market price climb closer to $25. If Rogue tribal becomes more popular, Sneak Attack may eclipse a market price of $30 within two years. 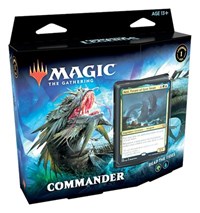 One of the exclusive Reap the Tides cards, Stumpsquall Hydra, feels odd in the deck since +1/+1 counters is not a sub-theme. The other exclusive card, Trench Behemoth, is a Kraken that synergizes with Aesi, Tyrant of Gyre Strait abilities. However, the real stars of Reap the Tides are the unexpectedly powerful reprints. WotC increased Reap the Tides' power level and value by including Eternal Witness, Ramunap Excavator, and Avenger of Zendikar. All three cards are among the top 50 most-played green Commander cards, according to EDHREC. There are several popular Commander cards among the noncreature spells as well. 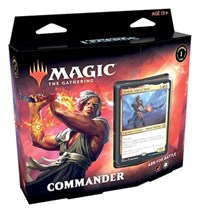 Blazing Sunsteel is a piece of exclusive Equipment in Arm for Battle that turns a creature essentially into Boros Reckoner. Timely Ward is the third exclusive card that can save your commander in a flash. Both of the unique support cards are serviceable in Arm for Battle, but not exciting. Even though Arm for Battle offers playable cards for Boros Commander decks, its estimated value is lackluster. Sram, Senior Edificer received two printings in the past six months. Swords to Plowshares also received two recent reprints in an Adventures in the Forgotten Realms Commander Deck and Strixhaven: School of Mages. Half of Arm for Battle's $15 market price likely derives from Sigarda's Aid. Unfortunately, Arm for Battle is a pass as an investable product due to reprint susceptibility. 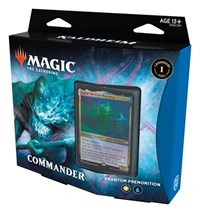 WotC increased the exclusive cards in Kaldheim Commander decks from three to eight. The most playable new cards in Phantom Premonition are Cosmic Intervention, Stoic Farmer, and Ethereal Valkyrie thanks to their synergy with multiple Commander deck themes. 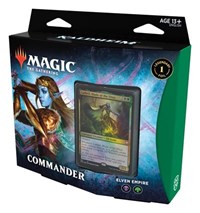 Two of the eight exclusive cards in Elven Empire shine above the rest. Wolverine Riders creates 1/1 green Elf Warrior tokens at the beginning of each upkeep and gains you incremental life. Any opposing players will want to remove Wolverine Riders immediately before you can use the Elf creature tokens for Lathril, Blade of the Elves life drain. Pact of the Serpent can fully refill a player's hand for some mana and life.

After looking over all of the reprints and eight exclusive cards, it is hard to believe Elven Empire is an intro Commander deck. Elven Empire's current market price of $27 reflects the premium that players are willing to pay for a great deck. Due to the popularity of Elves and card inclusions, Elven Empire could easily reach a market price of $35-40 a year from now.

Here is my ranking of the most investable intro Commander decks from best to worst: