Welcome to Magic Arcanum. I'm Ryan Gomez, here to help you make sense of everything going on in the Magic story.

Today we're looking at Chronicle of Bolas: Whispers of Treachery, the fourth episode in an eight-part storyline for Core Set 2019, available right now.

Let me set the stage for this one and remind you where we're at: Yasova Dragonclaw and her twin granddaughters are standing in front of a dead dragon, and a man named Tae Jin, who just revealed he's a ghostfire warrior. We're on Tarkir, a world presently ruled by fierce dragon lords, who have decided ghostfire warriors are forbidden, and killed them all off years ago.

So Yasova is asking where Tae Jin learned his sick moves, and he confesses his mother was a scribe who studied under Shu Yun and tried to help preserve the heritage and history of their people. As part of that, she sent her own son into the wilderness to study with a few other wanderers and scouts who survived the purge. It was there that Tae Jin met the man who would become his master, teach him the ghostfire ways, and then send him in search of Yasova.

Finding this acceptable, Yasova and her group bring Tae Jin into a nearby shelter that's supposed to hide them \. They settle in for the night and once again, Tae Jin gets to resume his recount of Ugin's story.

When we last left Ugin, he had been wounded by a ballista shot coming from the humans who had taken up camp around the mountain that marked his birthplace with Nicol Bolas. After spending the night atop the mountain to rest a bit, Ugin and Nicol are surprised to find a lone human figure climbing the mountain toward them the next morning.

Bolas is kind of eager to just roast this person but before he can even do that, it shapeshifts into Chromium Rhuell, one of their dragon brothers. Chromium taught himself to blend in with the humans so that he could learn from them, and he's here to share what he knows with Ugin and Nicol.

So if you open Chromium the Mutable in your pack of Core Set 2019 cards, now you will understand why his ability turns him into a hexproof one-one human for a turn. 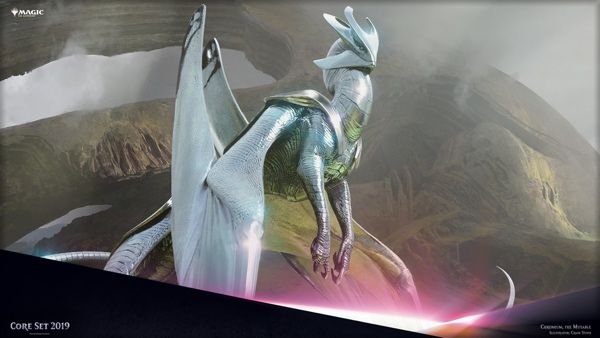 Chromium explains that these humans are all about killing dragons and knocked out four already and are eager to add more to their collection. He proposes they work together to take out the leadership within the human camps, figuring once those key figures are gone, the rest will give up their taste for dragon blood.

Nicol Bolas hears this and says, "well, why don't we just kill them all? If you leave any standing, they're still a threat to dragonkind in the future, so let's not cut any corners here."

Ugin of course protests because he values all living things, even the ones who created the poison still coursing through his leg, and Chromium tries to argue with Bolas but his words get twisted and used against him so he eventually gives up and flies away. That's cool with Bolas because now he gets to take matters into his own hands – he flies from outpost to outpost and uses mind control magic to start putting ideas into the heads of different humans. 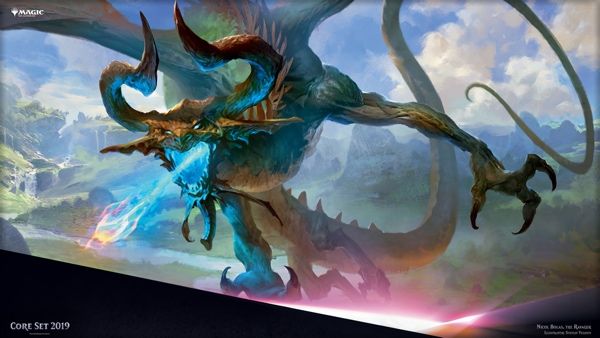 Within a day's work, he's got armies going to war with each other, because their heads are filled with thoughts he implanted there. The whole thing works out great, from his perspective, because he gets the dangerous humans to eliminate themselves without getting his own hands dirty.

Ugin is absolutely appalled by all of this but he doesn't dare challenge Bolas directly – he just watches as everything plays out and the humans slaughter each other. Bolas is super proud of how powerful he's become, and he decides his next move will be going against his dragon siblings. He wants to make them pay for looking down upon him and treating him like a weakling for years. 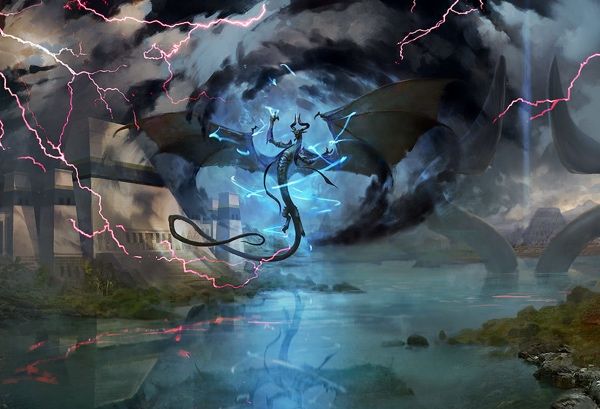 He invites Ugin to join him, and Ugin tries to refuse so Bolas pushes harder and tries to use his freshly demonstrated mind control powers on Ugin. This does two things. First, it makes Ugin realize his twin only cares about himself and will do anything – literally anything, including manipulate his own brother – to get what he wants. And that realization causes the second thing – Ugin's spark ignites, and he planeswalks away.

In Magic, something like one in a million characters are born with an innate spark, which enables them to walk from plane to plane. But, even if you have a spark, it won't do anything until it is ignited, most often by severe trauma. So Ugin, being mentally attacked by his beloved twin and emotionally crushed by the realization Nicol is going drunk with power, is flung to another world for the first time in his life as his spark ignites. He ends up in a place where the land welcomes him, and he feels awakened and renewed. He's come to Tarkir.

That's all Tae Jin can tell us, that's as far as his story goes. The group starts to speculate about what Ugin wants them to see at his tomb and what parts of the story are still missing but before they can get far, there is a disturbance outside the shelter and one of the guards tells Yasova to come outside because she "best come see."

And that's the story!