Magic Digital Next (MDN) appears to have been in the works since at least 2013. The biggest speculation is around whether it will replace Magic Online, Magic Duels, or both.

At the beginning of February, after the latest round of information about MDN came out of Wizards, Mishra's Fotoshop published a lengthy speculative article on MDN that went deep on MTGO as a replacement for Wizards' current digital offerings.

Shortly after, Hasbro's Toy Fair presentation went public with more information on Magic Digital Next, including a live video demo that, unfortunately, did not go public. 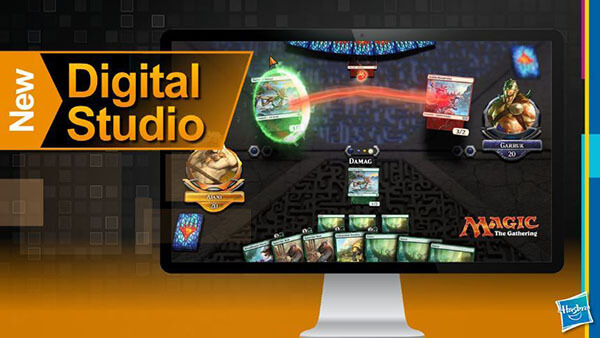 While it did confirm some of the speculation of Mishra's Fotoshop, the slide that caught my eye had three simple lines on it: 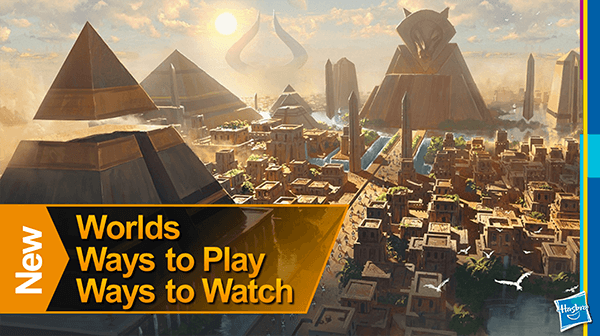 What if MDN isn't a simply a new game? What if MDN is something much more fundamental than that - a new platform that ties together all of Wizards digital products that utilise Magic's intellectual property?

There's a core issue Wizards' marketing hasn't yet resolved - they cannot properly track players across their multiple products. If a customer plays at the store, or use Magic Duels, or plays on Magic Online, they are using three different Unique IDs to do so. This is terrible for a business that wants to track the full purchasing lifecycle of their customers.

In 2014 Wizards went some of the way to improving this situation, consolidating user IDs tied to D&D accounts, DCI accounts (after the introduction of Planeswalker Points) and more as "Wizards Accounts". With some back-end trickery this information can be tied to Magic Online and Magic Duels accounts using unique identifiers such as email address or Wizards Account ID; however there is no requirement for these IDs to be tied together.

Here's a guess at what the current ID system looks like: 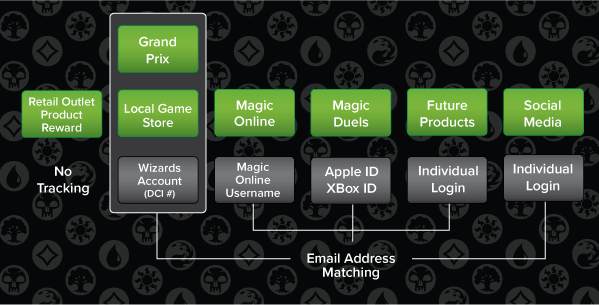 There are a litany of reasons why Wizards would want these IDs to be tied together and uniquely identified, especially between online and offline play.

Offline play is the 'anchor' that ties the Magic community together, whether it be at the a Local Game Store (LGS), Grand Prix (GP), or at the Pro Tour (PT). However these activities, per purchaser, are low-volume, low-margin activities. For instance, most players who participate at a LGS for Friday Night Magic may spend $10 to play in a constructed tournament and most of that money will return to the LGS, not Wizards.

Online play is the 'cream' that has radically improved Wizards' bottom line. When all the fundamental Game R&D, artwork, rules, world-building, etc. are already covered by offline play, the online expenses are limited to supporting IT Development and Infrastructure. Kept sufficiently streamlined, this allows online play to be high-volume and high margin. For instance, a player who may spend $12 on a draft at once per week at an LGS may spend $60 drafting once per night across a week on Magic Online. Importantly, the LGS draft has a much smaller profit margin for Wizards than the Magic Online draft, and because Magic Online revenue and profit goes right back to Wizards, they are highly incentivised to drive players in that direction.

Learning how to balance between 'anchor' play offline and more profitable online play is key to maximising the bottom line. However, with each mode of play tied to a different ID, it is difficult at best to track a customer across all forms. A unified ID would allows Wizards to understand exactly how the customers behave, and then encourage or incentivise them to participate in the forms of play they are not already part of. It would allow Wizards to build a more in-depth profile of their customers. By tying that information to other digital platforms, such as Facebook or Twitter (through the linking of identifiers at the back-end) they can ask questions such as "does this player purchase other Hasbro IP?" or "does this player have kids and are they taking them to play Magic?" and much more. 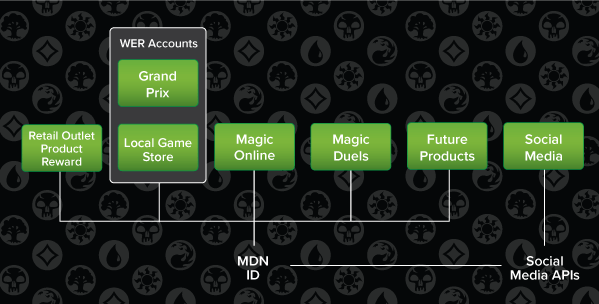 Tying the disparate Wizards Account, Magic Online and Magic Duels IDs together isn't rocket science. This is exactly what Blizzard did years ago with Battle.net. Battle.net originally started as a internet support service for Diablo. Battle.net then wrapped in Starcraft, but World of Warcraft began life with it's own registration system. Finally, in 2009, Blizzard merged together all accounts with Battle.net 2.0, giving uses a single log-in for all Blizzard digital offerings and providing Blizzard an unprecedented level of understanding of how their players shift between products.

That was seven years ago. When Hearthstone launched in 2014, it was automatically integrated into the Battle.net ecosystem. Blizzard immediately had the advantage of delivering cross-product promotion of its new digital Collectible Card Game; Get a character in World of Warcraft to level 20, unlock a premium avatar in Hearthstone. Reach level 12 in Heroes of the Storm, get a free premium card back in Hearthstone. These cross-promotions help maintain brand loyalty amongst their customer base at very little overhead. After all, Blizzard don't care which of their products the customer is spending money on, as long as it's their product.

So back to MDN. What if it's more than the next Magic Online? What if it is, instead, the Wizards version of Battle.net; a unifying platform that consolidates all Wizards offerings, online and off, into a single experience? 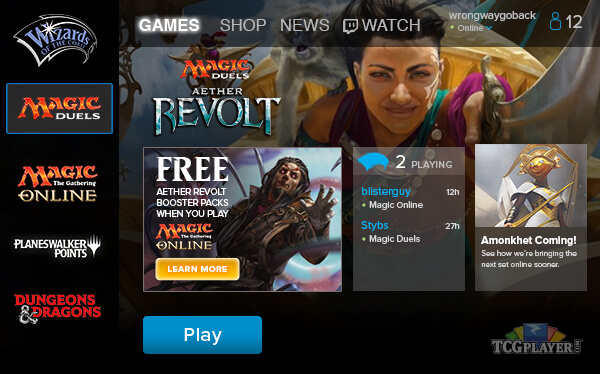 A customer would log into MDN - once - and have access to all the IP available from Wizards. They can look up their planeswalker points from their recent participation at the LGS, then open Magic Online and receive their full-art basic lands for participating in their 10th paper event. After a few rounds of Magic, they can open "Planeswalker Brawl" from MDN and join a team-game with three of their Magic playing friends, chatting on MDN Voice about the Magic movie trailer that was showing in MDN when it was first opened.

On the back-end, Wizards can carefully track the consumer habits of both their high-engagement and low-engagement customers. They can incentivise high online-engagement players to engage offline events such as GPs. They can use packs to offer rewards to play online - and then track where those packs were sold, who opened them, and what the percentage takeup in reward redemption was. Then they can see how many of these people then went on Facebook and Twitter to discuss what they opened.

Once that happens, the entire marketing ecosystem for Wizards is opened up for inspection, analysis and influence.

Some purely speculative fiction in this chart:

● A hypothetical Unified Rewards Program that covers all offline and online play, including retail purchases. This allows for cross-platform promotions and rewards, integration with the Organized Play rewards, and possibly cross-IP promotion.

● A hypothetical Unified Organized Play Program that integrates both paper and digital and creates clear, integrated pathways for Pro Play. No matter how a customer plays, their achievements all build towards the same goals.

● A hypothetical Consumer Data Tracking Database that pulls together all activity bound to the unique MDN ID, and allows Wizards to do the necessary sophisticated consumer modelling that is Hasbro's reward for investing in MDN.

It's important to bear in mind that all Pro Play - the GPs, Pro Tour, Nationals - are marketing investments by Wizards. This type of data would allow Wizards to drive that marketing budget further, integrate online and offline play, and to demonstrate back to Hasbro the effect that individual marketing spends have on overall consumer return on investment.

On March 9, Wizards announced that they were decommissioning some legacy systems that that, in the future, DCI numbers would be phased out in favor of Wizards ID. It may well be that, at MDN launch, Wizards ID and MDN ID are one and the same.

What evidence is there that MDN also a platform?

Take a look at this slide from the Hasbro 2015 Investor Presentation. 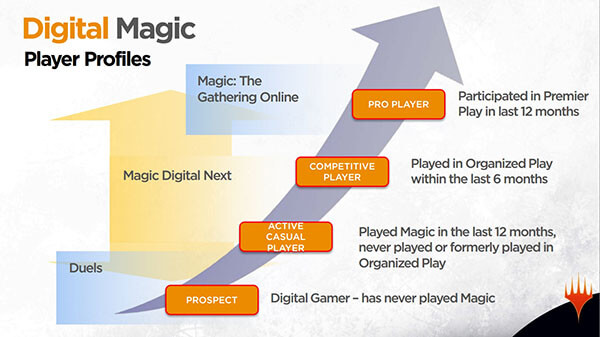 There's nothing here that indicates that MDN wholly replaces either Duels or Magic Online, but it could indicate that it is expected to integrate them both. Here is a quote, from the 2015 Investor Day, that closely aligns with that interpretation:

"The greatest opportunity for Magic is to create a new digital experience, leveraging contemporary technology to create a seamless digital experience that meets all the players' needs from new players to pro players. This is what we are investing in, and we have a team in place to deliver the first new Magic Digital Next product in the next few years."

"Seamless Digital Experience" is the key phrase here, and exactly the type of wording I'd expect when the dev team is discussing single-ID log-in and a unifying platform with a marketing team.

Here's another quote, this time from the 2016 Hasbro Earning Report Q&A, by Brian Goldner:

"So, we really do look at the way we invest in our business to set us up for the future, most notably in Magic: The Gathering. For example, we have Magic Digital Next, which has been an investment for a number of years and will continue to be a bit of investment this year because, of course, late this year, you'll start to see some of the evidence of what the team has been working on as they begin to put that platform out into the market."

Again, talk of a platform, rather than a game. This is very important, as I believe it's highly unlikely that we'll see a replacement for Magic Online soon (Elaine Chase recently reaffirmed Wizards' commitment to Magic Online) and I believe even more firmly that Wizards will not run two versions of a "Magic Online" product at the same time, something they have been very diligent to avoid in the past.

● Wizards needs to consolidate their customer tracking information into a single customer-identifiable ID.

● Wizards have already consolidated DCI and other information into "Wizards Accounts."

● Wizards is phasing out DCI numbers and shutting down legacy systems.

● MDN has been identified as a "platform" that provides a "seamless digital experience."

● MDN could serve as Wizards opportunity to unifying accounts as a launch-pad to interacting with Magic IP products, both online and offline.

While I'm sure there's an element of the community that will gladly cheer on a revamped Magic Online (or even full replacement), Wizards have the opportunity to capitalize on more than a UI refresh by creating a platform that allows them to fully understand the lifecycle of their customers. With Magic driving so much of the Hasbro bottom line and consistently performing year after year, Magic Digital Next should have all the internal goodwill and investment to make that opportunity a reality.