Creature types are one of the biggest aspects of Magic. They serve us both strategically as well as flavorfully. Heck, the fantasy setting of Magic is one of its largest appeals in the game for a lot of players. We love the worlds and characters and stories that the game offers us. I have to imagine that Magic, if the game was still strategically similar, would fare just as well if the game were based on a Sci-Fi or Steampunk background, but we may never know. All we know is that Magic is incredibly successful, and we have evidence to support the fact that players like using things like elves, angels, demons, and dragons; one way or another, they seem to enjoy a game that is heavily steeped in a flavorful background.

As far as strategy goes, each of the aforementioned creature types has a specific flavor that affects game play.

Dragons all fly and have huge, splashy effects, typically either a way to Deal Damage or a way to increase their power. You can see this in cards like Niv-Mizzet, the Firemind, Bogardan Hellkite, and Kilnmouth Dragon.

Angels also fly and all tend to have protection abilities, focusing on either protecting themselves or saving another creature or player that might find themselves in Harm's Way. You can see this represented in such cards as Restoration Angel, Angel of Glory's Rise, or Iridescent Angel.

There are tribes like elves and goblins that not only have specific qualities among the creatures (both tribes being particularly good at swarming the board), but they also have specific non-creature cards that involve these tribal qualities, such as Elvish Promenade and Kuldotha Rebirth.

Why are we talking at length about tribes in today's Magic Origins preview article? Is today's preview of a popular tribe? Does it have to do with some of the most popular creatures in the game of Magic?

Well...not really, but kind of?

You see, when our preview card first entered my inbox and Melissa DeTora (who recently took a position at Wizards of the Coast and, as such, is already privy to all the cards within Magic Origins) asked me what it was, I told her it was a "sweet spider." I couldn't remember the exact name at the time, unfortunately.

When I finally got home, I checked the name and upon bringing up the card I was informed by her that the creature in question was indeed not a sweet spider. It was not an arachnid at all, in fact.

It did not have the characteristic reach keyword.

It did not have a higher toughness than power.

And it did not have the creature type "spider."

What it is, however, is something altogether as nightmare fueling as spiders can be to some people. May I present the horror known as Despoiler of Souls: 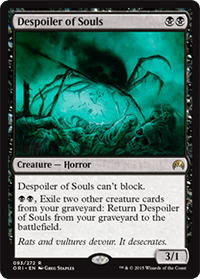 If it wasn't clear by now, my initial tirade about creature types was, in part, due to the obscure nature of the horror creature type throughout Magic's storied history. A quick search revealed that there have been about 145 horrors in the game's history and the majority of them have been black creatures. Unfortunately, it seems that most of their similarities stop there. Unlike angels and dragons and elves, the main thing that horrors have in common is their ability to be...well, disgustingly terrifying.

Despite this fact, though - or perhaps because of it - horrors still remain an iconic part of Magic, both in lore and strategically within the game. Take cards like Spellskite (which you might not have even known was a horror!), Laquatus's Champion, Phyrexian Obliterator, or even Faceless Butcher. All of these creatures have seen some level of tournament play, all of them do completely different things, and all of them are downright hideous! (Sorry, horrors.) (Not sorry.)

Hidden Horror was one of the first horrors I was ever exposed to in Magic and it's still one of my favorite creatures (in a subconscious kind of way). A 4/4 for three mana was just huge at the time, and nowadays my more evolved Magic brain wants to find ways to exploit the discard requirement in a format like Modern.

I think the horror Despoiler of Souls has the most in common with is the format-defining Ichorid. Both creatures are 3/1s, both can return from the graveyard to play, and neither can block (Ichorid more so because he will never be in play during which a block will occur, barring some reanimation shenanigans). Ichorid had entire archetypes created after him, but there are a few key differences that should be made clear so as not to mistake Despoiler of Souls as the next Ichorid:

These are simply the ways Ichorid is better. It would be unfair to list only the pros of Ichorid when we're meant to be singing the praises of Despoiler of Souls though!

Take a look at some of the ways our new spidery-horror friend is better:

1) Ichorid must be sacrificed at the beginning of your next end step. The Despoiler stays around until it is dealt with.
2) Ichorid has to exile a black creature, while the Despoiler cares not what color creatures you exile.
3) Ichorid cost four mana to hardcast, while Despoiler costs a mere two.
4) You can return the Despoiler to play at any time, including the end of your opponent's turn, whereas Ichorid could only be returned during your upkeep.

While the two creatures are quite similar, they are also very different. 3/1 creatures for two mana often see play in aggressive decks, and this one actually happens to work quite well with the devotion mechanic which will still be a factor until Battle for Zendikar enters the equation. And at that point, who knows what kind of graveyard shenanigans may be present?

Heck, even trading this guy for opposing creatures in the late game is pure value. All in all, Despoiler of Souls is an aggressively costed attacker that could end up dealing a good amount of damage throughout the course of a game, while also playing well with cards like Gray Merchant of Asphodel, Mogis's Marauder, or Erebos, God of the Dead. I look forward to seeing him in decks that precedes him with a Tormented Hero and follows him up with a removal spell and an attack for five.