If you're anything like me (and you were home circa 2 am Friday and Saturday night last week) you were glued to the Pro Tour Khans of Tarkir coverage.

If you read my articles on BG Devotion last week (Monday) (Friday) you know that it was a priority for me to win my Standard Grand Prix Trial before the Pro Tour fired...on account of a predicted sea change in terms of the Standard landscape. From my perspective, I wanted to make sure I could cash in the cards I had, with the strategies I had practiced, before the Pro Tour up-ended the metagame and changed everything.

You probably already know this...the Honolulu Pro Tour shook things up substantially. Randy Buehler's predicted thirty-two copies of Courser of Kruphix in the Top 8 didn't quite happen; and even though the Jeskai (Jeskai Wins?) wedge put up some anticipated firepower in the hands of McClaren and Strasky, one-third of the All-American (but no actual American) Red-White-Blue Top 8 presence was in combo format!

Scads of mid-range and shifting board control decks...

Even beloved BG Devotion has received a Mahalo Makeover with See the Unwritten playing pseudo-Tooth and Nail in the powerhouse strategy.

But for my money, the most exciting stuff (other than watching McClaren rip an excess of burn spells on camera despite his opponent successfully executing his strategy, over and over) was the strategic break outs of two different mid-range green wedge cards:

Siege Rhino's impressive performance isn't exactly a surprise; in chatting about this new set, my spiritual deck design BFF (and also IRL BFF to be fair) Patrick Chapin called Siege Rhino "an Erhnam Djinn whose drawback is drawing two extra cards" ... But Sidisi, Brood Tyrant seemed more exciting in the hands of Christian Seibold than I personally could have imagined.

For Reference, Whidisi by Christian Seibold

I am super used to Brian's slavish sentiment for all-things Simic, but watching this, I decided that Yes, that deck does in fact look pretty impressive.

Now separately, you could not have been nearly so glued to the small screen as I was last weekend without watching Mike Sigrist beat the bejeezus out of any and all challengers with Siege Rhino. It is obvious if you "say it out loud" but Siege Rhino is just awesome reach for an attacking deck that is already capable of putting the opponent on the back foot. It's awesome racing in a world with a Jeskai aggro deck; it's awesome card efficiency on its face; it's really, really awesome with Whip of Erebos.

Whip of Erebos and Siege Rhino are spiritual BFFs; they are like salt and pepper, peanut butter and chocolate, batarangs and utility belts. Not only are they both life-gaining semi-soft locks individually; when you combine them you can start to see a real aggressive / attack oriented lifegain strategy start to unfold.

...which isn't an Earth shattering revelation, really, given the synergy between Siege Rhino's recent ancestor Gray Merchant of Asphodel and Whip of Erebos, historically.

When you consider the overlapping synergies between Sidisi and Satyr Wayfinder with Siege Rhino once Whip of Erebos is on the battlefield, life starts getting really interesting. The notion of playing, strategically, for the Rhino-burn plan gets increasingly realistic when you think about seeing a huge percentage of your deck between rips and self-mill. Most or all of the cards in this deck are efficient to begin with, but they are really more than the sum of their parts when you are planning -- planning -- to play six or more Siege Rhinos to bust out of a stalled battlefield.

This is what I came up with:

This has been awesome so far. Perfect? Not yet (it's only been a day or two); but really awesome and encouraging for an Alpha-stage new brew. I feel like Seibold's "be or beat the Hornet Queen" philosophy might be less important now because of the combined advent of Doomwake Giant and viability of Jeskai Combo, but so far I've mostly only been able to beat Hornet Queen by getting in early damage + going to the face repeatedly with Siege Rhino (which is fine).

No, the deck does not have a real "Hornet Queen plan" at present. It's possible that the deck should just have some Hornet Queens (like Seibold's original) in place of singletons like Sagu Mauler and the main-deck Reclamation Sage. I'm sure it will continue to evolve.

Well, that certainly was a lot of preamble about a new brew.

Here's the situation I want to discuss this week: 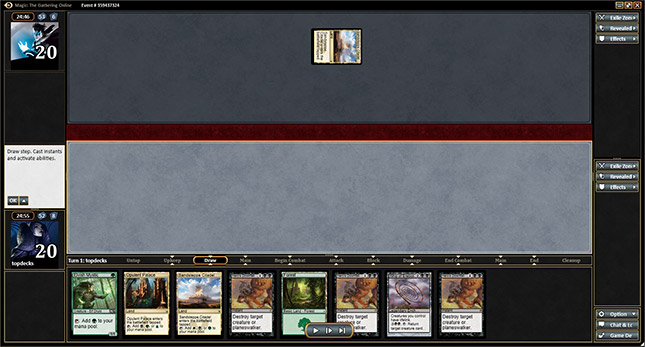 We have lost the roll and are going second.

It is game one so we do not know the opponent's deck, but he kept seven, leading on Sandsteppe Citadel.

...then we drew a third Hero's Downfall for our eighth card.

The cool thing, intuitively, is that we can cast every card in our opening hand, more-or-less. But how do we get there?

The problem at hand?

If you're just joining us, this is Make the Play Monday.

Every Monday we propose a situation (or more) like this one and ask the TCGplayer community how they would play the spot.

As our belief is that competitive Magic is essentially a string of decision opportunities, one after another, talking through situations like these that can come up over and over, is meant to improve the long-term results of TCGplayer readers via more informed and consistent decision-making.

Put your response to "play your first turn" in the comments below.

In addition to improving your own play and contributing to your Magic community, you will be eligible for fabulous prizes!

We will come back to this situation on [Flores Rewards] Friday and talk through the best answers. In addition to my two cents we always enlist a Celebrity Guest, an elite member of the Magic community, for his take as well. In most cases one reader-responder who agrees with Yours Truly and one who agrees with the Celebrity Guest will each receive a $25 TCGplayer.com gift certificate!

However this week, like last week's visit from Pro Tour and Grand Prix Champion Osyp Lebedowicz, I will defer my take and both prizes will be defined by the Celebrity Guest's take.

Ready for progress and prizes?

Give us your take in the comments below!