Part I: A Note on Plays

I have actually been meaning to talk about this for a couple of weeks...

Man am I grateful for this column!

I know that might seem odd (as I'm the one writing, or at least three-quarters writing, it each week), but I have to say that the focus of Make the Play Monday and Flores Rewards Friday has shifted my focus in a positive way.

When I first pitched the idea to our benefactors here at TCGplayer my idea was to try do something that no one was really doing. When I first started writing Magic articles twenty years ago, the process of sharing deck ideas or trying to uncover the strategic underpinnings of the game were relatively uncharted territory.

And while broadening how we all think about the game, choose our cards, or decide what role we are going to take in terms of large chunks of our decisions have been unambiguously helpful, it seemed to me that the most pregnant frontier for improvement was on the plays themselves.

Zvi Mowshowitz asked me a few years ago what makes me happy / makes me go / makes me want to do something rather than something else. My answer in life ended up being pretty similar to my answer in Magic:

Not to be clever, mind you; just to feel clever.

Recently I've shifted my focus in Magic, at least. I went through a phase when I was playing a lot of Temples and Young Pyromancers and stuff like that to just remember ever trigger.

Now, more broadly -- and this comes back to this column -- I have been trying to focus on my individual plays.

An underappreciated number of plays on the table are mini-puzzles.

And every single turn we have the opportunity to completely punt a match (but, thankfully, some of them give us the chance to improve our likelihood to win).

Respecting these things, and trying to maintain focus on individual plays has been super helpful for my game.

I hope these exercises are helping you, too!Part II: The Deck

...which is not to say that I've lightened up on my attitude that what deck you have in front of you is the single most important [macro] decision you make over the course of a tournament.

After all, all the other decisions you make are ultimately framed by the limits and possibilities that your deck affords you!

So this week I wanted to be the latest writer to jump on the bandwagon of GW Devotion.

...which makes an odd kind of sense.

Players -- especially players who have never played GW Devotion -- are excited all over the Magic community to pick it up and try it for its unusual overlap of power level and possibilities.

And as popular as the deck has been at a macro in terms of article topic fodder, most of those articles are of the "why you should play this card instead of this card" variety. Per usual, ours is going to be of the "what should you do given these parameters" variety instead.

For purposes of this week's scenarios this is our GW Devotion build:

The winning deck list from Grand Prix Miami makes sense to me from two directions:

1. It won; ergo it gets a little extra pedigree relative to other successful builds.

2. Temur Sabertooth! That one card allows the GW Devotion deck to borrow a little bit of the Temur Ascendancy Combo deck (if not the capability to make infinite mana). Temur Sabertooth makes for some nutty card advantage scenarios with Genesis Hydra; Polukranos, World Eater; or even certain face down 2/2 cards.

● GW Devotion is the green-based Devotion deck du jour. Like most such decks, it is heavy on the mana acceleration (Elvish Mystic, Sylvan Caryatid, Voyaging Satyr, and later Nykthos, Shrine to Nyx and potentially Nissa, Worldwaker). It can come out fast with a turn three Polukranos, World Eater; establish persistent Staying Power with Whisperwood Elemental; or go completely over the top with Genesis Hydra (and potentially Genesis Hydra into Hornet Queen).

● But unlike other Devotion decks, the white in GW offers some unique capabilities. One of them is the potential speed of a turn two Fleecemane Lion (or, alternately, the Staying Power of a monstrous Fleecemane Lion).

Which brings us to...Part III: The Plays

It's game one so we don't know what we're up against to start.

So against opponent unknown we keep a hand of:

So...not the fastest hand in the world, but at least we have the mana to make our first few plays.

We run out the Temple of Plenty and see a Forest.

Opponent unknown? Ship that Forest. We have three other lands in hand already!

The opponent starts on a Mystic Monastery. Could be fast, could be slow, but at least he hasn't done anything yet.

Things immediately start looking up in the world. We pull an Elvish Mystic.

The opponent answers with a Seeker of the Way.

On our third turn we make an interesting, possibly questionable, but reasonably defensible play:

We run out the Courser of Kruphix with the Elvish Mystic. We do this because our Mystic wasn't going to rumble into The Red Zone anyway, and if we reveal a land we can play it and gain some life.

We get paid off with a Forest and reveal Polukranos, World Eater to the world [that is quaking in fear of being eaten].

The opponent runs out his third land, makes Hordeling Outburst and crashes with his now 3/3 Seeker of the Way.

With Seeker of the Way as tapped as all three of the opponent's lands it seems safe to block with Courser of Kruphix. The animals bounce, he gains three life, et cetera.

We draw the Polukranos, World Eater, revealing another Elvish Mystic.

We have lots we can possibly do as there are two lands in our hand and we can cast any of four spells. Our six are...

We have twenty-one life, no cards in the bin, and a current battlefield of three lands, an Elvish Mystic, and a Courser of Kruphix.

The opponent has five cards to our six, and four creatures to our present two (a currently 2/2 Seeker of the Way and three 1/1 Goblin Tokens). We're tied at three lands for now.

Scenario One asks a straightforward question: When you can do whatever you want, which path do you pick? 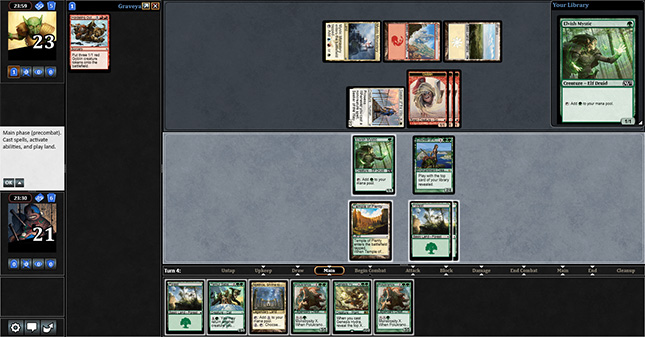 In Scenario Two we are on the play in game two against the Red Deck.

The opponent started on a pair of Foundry Street Denizens that he backed up with a pair of Hordeling Outbursts; with us on the draw... It was just an overwhelming amount of damage.

But here in Game Two we have some options and a renewed lease on life going first.

On the first turn we played a Temple of Plenty and pushed a redundant Voyaging Satyr. Voyaging Satyr isn't actually that bad (lives through combat with quite a few of the opponent's creatures, kills many of the ones it won't survive through, and is a relevant two drop on the play)...but we had two other accelerators already.

The opponent opened up with Foundry Street Denizen (of course!)

We run out Sylvan Caryatid on our second turn.

He plays a second Foundry Street Denizen (did I mention "of course?") and a hasty Taylor Swiftspear.

A now-3/1 Foundry Street Denizen and regular old 1/2 enter The Red Zone and we block the one that won't kill our 0/3.

This brings us to this position on turn three: 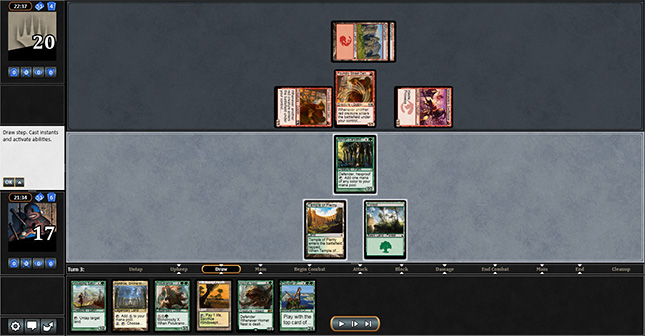 We have six cards to the opponent's four.

With two lands and a Sylvan Caryatid already in play we can choose from...

We are facing off a pair of Foundry Street Denizens and a Monastery Swiftspear that are all threatening to get bigger next turn (because that's what they do).

For those of you just joining us, this is Make the Play Monday!

Our belief in this column is that Magic is ultimately a game of decisions; many, many decisions.

Every time we have the opportunity to make a decision we can get a little closer to winning, or a little further away.

We ask the TCGplayer community to share their thoughts in the comments below.

What plays would you make in either of these scenarios?

We will revisit them on Friday, when I reveal my thoughts + bring on a bona fide Magic: The Gathering Celebrity Guest to share his.

Well in addition to the whole "making better decisions helps us win more games" thing, there are also generous prizes!

Scenario One -- comments below.